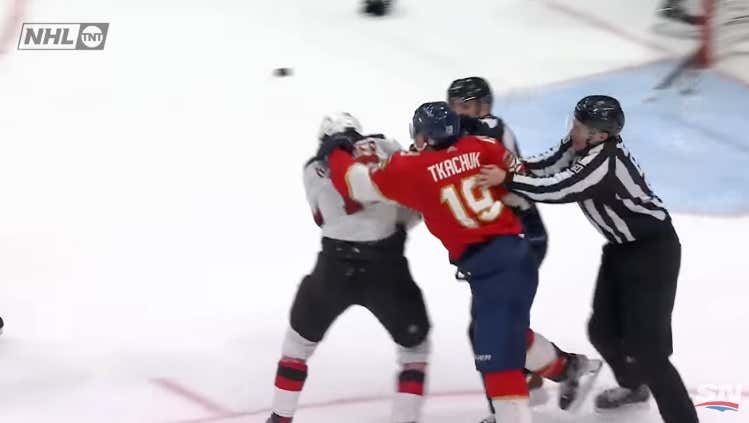 It's that time of the year where everybody is looking to be on their best behavior because they know the big man in the red suit is watching. Hold a few more doors open for people. Help a few more old ladies cross the street. Pay for your wife's boyfriend to take her out on a date. The usual. Because everybody wants to be as good as possible to make sure they get all the presents they asked for under the tree on Christmas morning.

Matthew Tkachuk don't give a heck about being good. In fact, I'm starting to think he actually wants coal for Christmas.

Now you can watch that clip and say whatever you want about Matthew Tkachuk. I know the fella has a propensity to go after guys after the refs are already in the mix and breaking shit up. He's a weasel and a rat, but that's part of his game. That "holy fuck this guy is annoying" aspect of his game is a big reason why the Florida Panthers went out and made a massive trade for him over the summer.

But if anything, I think this clip says a helluva lot more about the New Jersey Devils. A few weeks ago Keith Yandle went on television while the Devils were in the middle of a long ass winning streak and said he still doesn't think they'll even make the playoffs this year. That's probably not true and they'll most likely be in the playoffs. But once they're there? Woah buddy is this team the furthest thing away from being able to handle a 7-game series against anybody.

The captain is getting rag dolled out there and nobody did anything about it. There are a few no-no's out there that call for an immediate response. Touching the goalie and going after the captain. Tough look for the Devils right there. Good news is that they still have another game against Florida on the schedule on March 16th. Might want to add a few more goons to the mix before the trade deadline.