There are countless theories on the best ways for people to invest their money.

Some people invest it conservatively by putting it in mutual funds that are spread out over hundreds of different companies. Some get risky and invest in just a few different companies. I know there's plenty of people who would tell you that investing in cryptocurrency is the smart thing to do.

Except there is a right answer. There is one surefire way to invest your money, and double, triple, quadruple, or 10x your investment without having to do a lick of work. The best possible way to manage your money, is by investing it in an NBA team.

Now let's consider the Nets. In 2000, Mikhail Prokhorov purchased the Nets for $200 million (a number I hardly believe but everything I've found online tells me it's true). Then 19 years later, the Nets were sold for $3.3 billion. Pretty solid return on investment.

I could go on with examples forever. This article listing the most expensive team purchases in NBA history provides plenty more of them.

I'd hate to throw around the phrase, "free money", but I can't think of any other way to describe what happens when you buy an NBA franchise. Boxes of money just show up at your front door step every morning. The best part about buying a team is that you don't even have to be good at your job to make a profit. By all accounts, the Mikhail Prokhorov did an awful job owning the Nets, and it didn't matter in the least. What happens between the time you buy and sell an NBA is irrelevant. Simply purchase a team, hire a GM, then fuck off for 20 years as the value of your team increases exponentially. 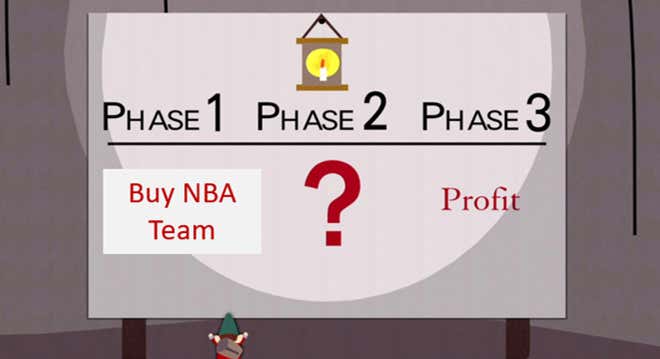 So how can someone like me get in on this? Myself, nor anyone reading this has billions of dollars (if you do then please DM me and explain how the hell you found yourself here reading a John Rich blog). But say Jerry Reinsdorf decides he's selling the Chicago Bulls for $6 billion (I think that's a fair price, considering he purchased the team for $16 million in 1986). How can I hop aboard the the free money train that is the Chicago Bulls.

Would a bank not give me a $6 billion loan? If they were smart they would. Sure I have zero assets, and have been spending more money than I make for the last 5 years, but the Chicago Bulls are a sound investment.. I am bullish on the Chicago Bulls. The bank knows their value is going to go up. The bank should want to do everything in their power to tie up as much money as possible in an NBA franchise.

If for some reason the bank decides to turn down my request for a $6 billion loan, maybe we can get some sort of Barstool Super Group together. Super Groups come together to buy teams all the time. Usually they're made up of small number of people, all of whom are investing multiple million dollars of their own money. I'm sick of 7 Jay-Z's coming together to buy 20% of an NBA franchise. Why can't we find 600,000 Stoolies willing to contribute $10,000 each, to own 100% of a team? Why would anybody not jump at that opportunity. NBA stocks only go up. It's a universal truth. I don't have $10k to spend, but I'm sure the bank will have no problem loaning it to me considering I'll have started the negotiation at $6 billion.

Why are rich people the only ones who have crack at this free NBA money. I'm tired of it. If we divided up NBA teams amongst the common folk, it would solve half the world's problems. Everyone's student loans would be paid off. The problem of homelessness would be solved. I'd finally be able to purchase this pair of Off-White Shoes.

Next time an NBA team comes up for sale, I want in on the action. Give it to. Give me the money. Let me own your team. Please.