It's a tale as old as time. Gumby was a child star thrust into the spotlight, still not mentally mature enough to understand the repercussions of the harrowing journey in which he had embarked. At first he had the entire world by the balls. Money, fame, fortune, and women. The rock star lifestyle is a balancing act and he maneuvered it like a trapeze artist. A 30 year run on TV that peaked during the 60s and 70s, Gumby consumed so many drugs and fell into so much pussy it would make Mick Jagger and Steven Tyler blush.

Green face? Gumby couldn't believe the world was just laughing as SNL took hateful shots at his culture and career.

The anger continued to build, the alcohol continued to flow, and most mornings he couldn't even remember what he said on the incoherent rambling voicemails he would leave on Pokey's phone the night before. Pokey hadn't answered in months. Moved on from Hollywood with a wife and three mud ponies of his own, even he was sick of Gumby's shit.

Last time uncle Gumby visited he got so drunk he ate all the leftover birthday cake and pissed in Pokey's kids bed. He loved Gumby like a brother but not more than his wife and family. Friendship and loyalty be damned, he wasn't going to let Gumby's demons take him down too.

Now, the only person left in Gumby's life is a third rate agent who is trying to book him on The Masked Singer. Though lucrative, Gumby rebuffed the offer. There was no way he has sunk to the D-List celebrity depths of Nikki Glaser or Adam Carolla, he thought. After all, he's fucking Gumby. "I'm still a fucking rock star!" he said to himself as he partied alone is his one bedroom apartment.

But even through The Doors blasting at full volume and the numbness from the cocaine he could still hear his conscience repeating the same question over and over. How did he end up here? How did he end up in…Green Bay, Wisconsin?

Sometimes he would cut himself - just a little - to see if he still bleeds. Quickly reminded that he has no blood, just clay and sadness.

This past weekend Gumby was cleaning his local bar. It was the only job he could get since he has a criminal record. Plus the bar owner lets him collect half his check in the form of a tab, which is where that money would inevitably go anyway. 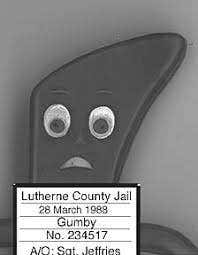 Watching him clean dried up piss off the urinal, a patron felt bad and offered him a ticket to the Packers game. Gumby was his favorite cartoon as a child and to see him this unkept and downtrodden broke his heart.

"It'll be fun," he told Gumby. Knowing full well that for him this would be anything but fun. But this is the holiday season and he was in the giving spirit.

Gumby insisted on tailgating at 9am. "But the game doesn't start for 11 hours and I have to work. It's a Monday for Christ's sake!" the patron pleaded. Gumby was undeterred. "Just meet me down there whenever you can," Gumby said as the patron handed him his ticket.

When the patron finally arrived at 6pm to the tailgate it was obvious Gumby had been drinking heavily. He had dried up vomit on his chest and tears in his eyes. He just kept muttering, "If anyone can save the season it's Aaron Rodgers." Even more obvious than the drinking was the fact that Gumby wasn't just talking about the game. He was talking about himself.

The patron left Gumby after the first quarter. Yelling at Gumby that he needed to get help because he threw up on the escalator and asked the woman next to him if she had any "booger sugar because old Gumby needs a gummer." She laughed but the patron saw the fear in her eyes. Enough was enough.

So there Gumby was, alone, not even halfway through the game, blitzed out of his mind, and with a tolerance so high that he was pouring beer into his eyeball to try and get drunk faster. Mainlining Coors Light like a junkie who has run out of good veins.

And all the Mannings could do was laugh. Soulless evil men, they cackled as an American icon crumbled before their very eyes.

"Hey, you know you gotta do what you gotta do," Eli said jokingly. But you can see on Eli's face he knows the truth. They are not laughing with Gumby, they are laughing at him. 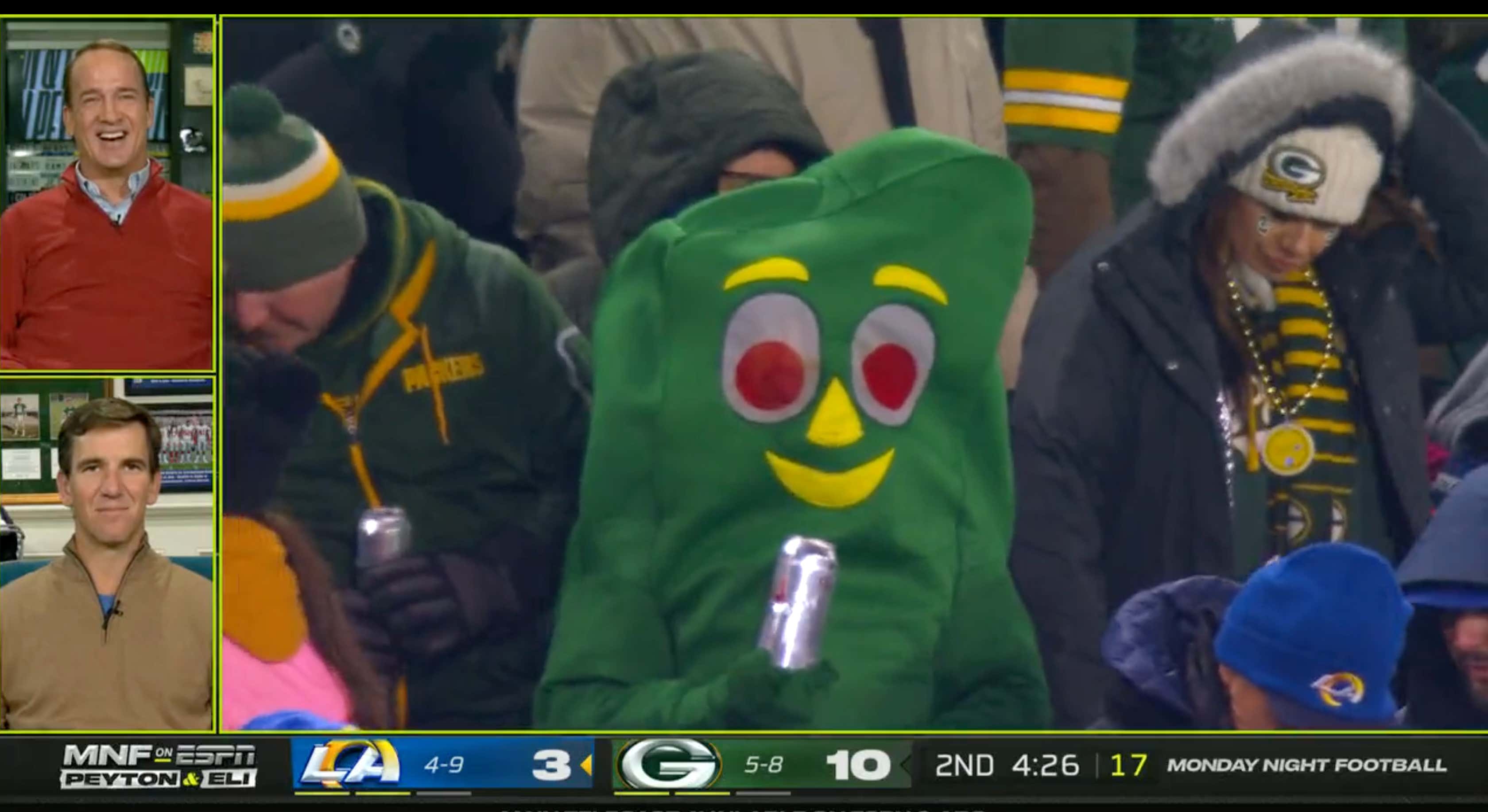 Gumby's blood is on your hands now, Manning brothers. You had the opportunity to save him and you chose to instead make him the butt of the joke. For shame.