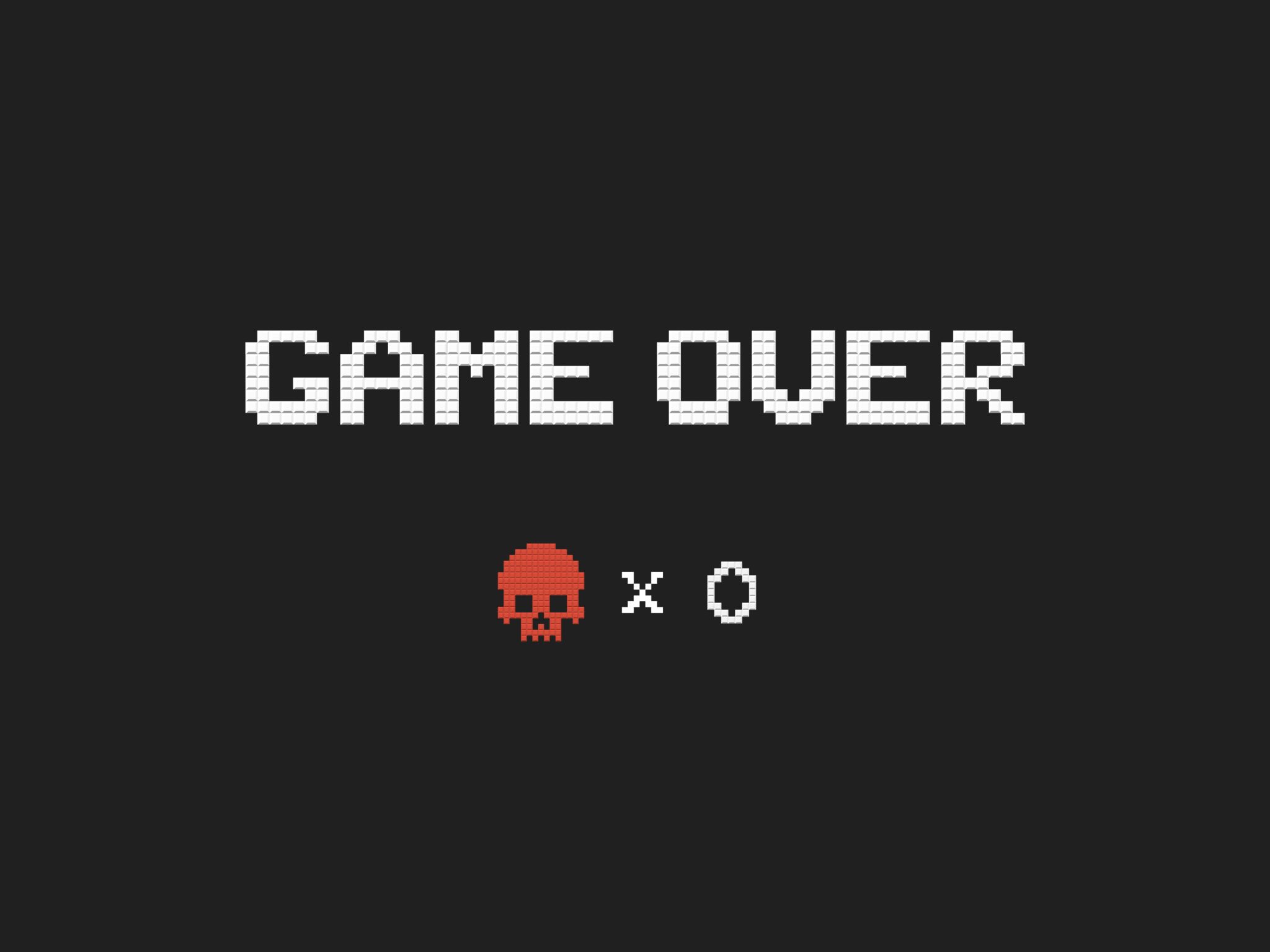 The end of the New England Patriots / Las Vegas Raiders game was the craziest last play blunder for the Patriots since Rob Gronkowski played a snap at free safety. Actually, if we're being real Sunday's was immensely worse. You've heard of the "Leon Let it go!". Now you've witnessed the… "Jakobi Bogey"? The "Mac Truck-ed?"

But I'm not here to relitigate the game. You know what happened in this real football game (unless you're team rigged). I'm here to pivot to the ramifications in the sad world of fantasy football. Somewhere out there some poor sap was leading by more than three points but less than four on the final play with Jakobi Meyers and all other players played for both teams. Somewhere, such a team manager would not imagine in a million years that Meyers would lose two points on a fumble and another two on the 20-yard loss charged to him on the lateralception for a total of -4 points. 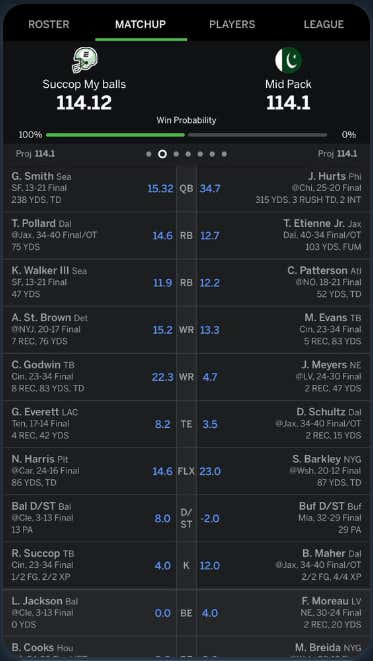 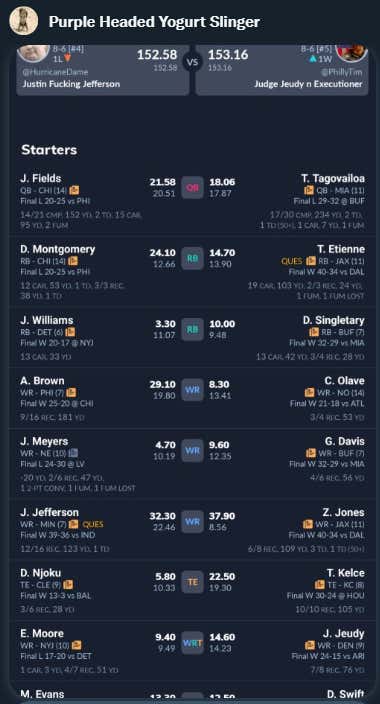 Welcome the fantasy football playoffs, baby! Oh, you have a three-point lead (but less than four-points) going into the last play of the game with all players on both teams in the clubhouse except Jakobi?? 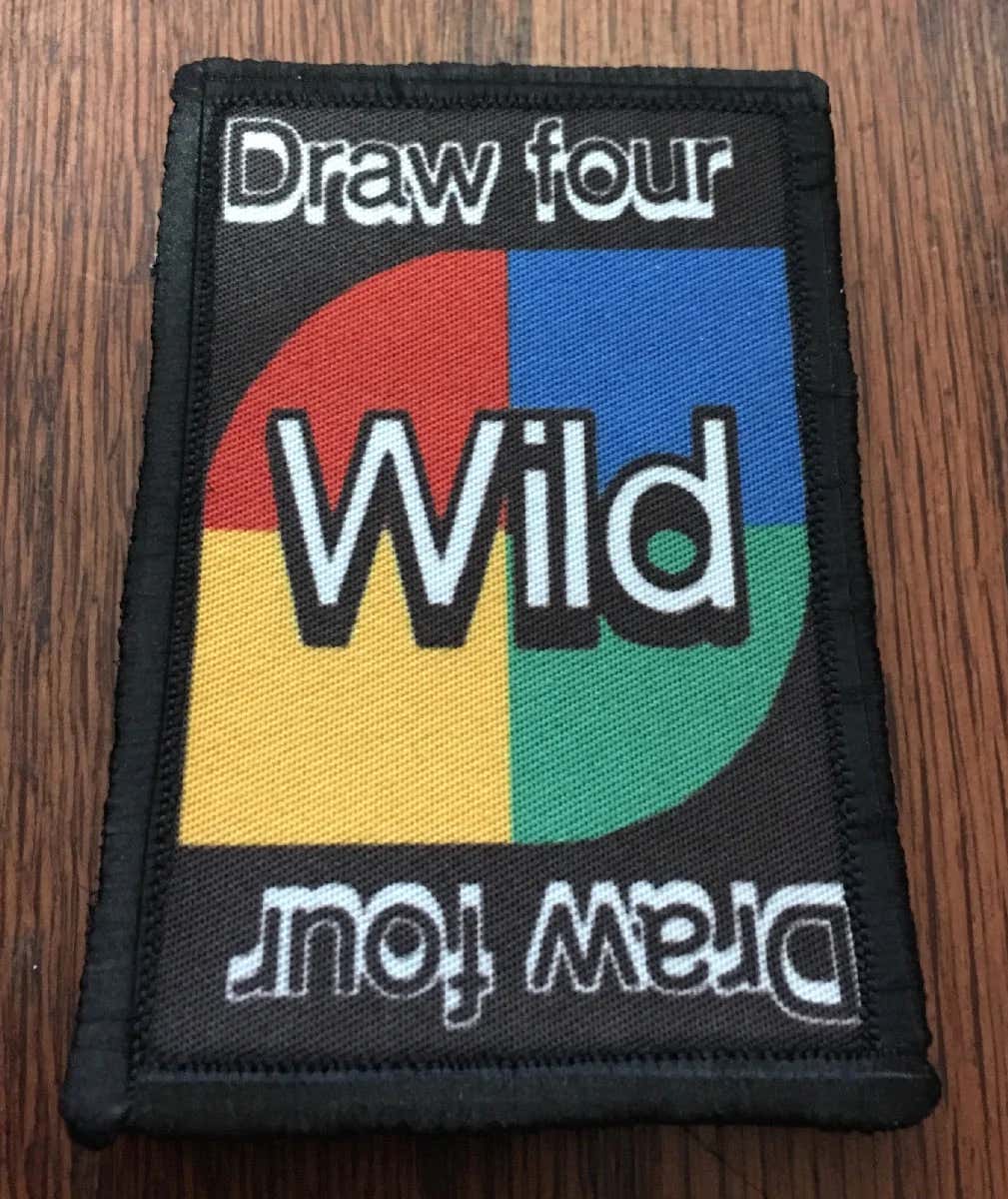 But… What if? What if there was a worse bad beat? What if all the above happened except instead the guy with Jakobi Meyers was up by ten points instead of three? And what if all other players on each team played except for one little tiny itsy bitsy exception: the opponent also had the Raiders DST? 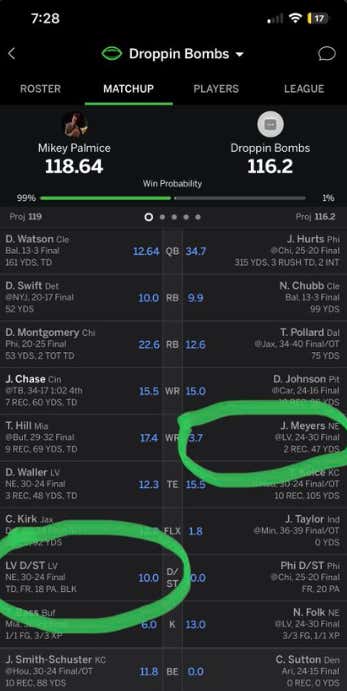 I searched high and wide online last night for this very thing because I'm an absolute sicko. And I found my white whale. I did my due diligence too. After requesting better proof than a photo-shoppable screen shot, Colby quickly gave me the following 100% proof which even includes my DM notification making a cameo:

Unlike what Jerry Seinfeld or many Patriot fans might think about the actual game: this is real and it's spectacular.

What on earth were the chances of this happening!? I did my best to estimate an answer. There are two key components to the ridiculousness of this play. 1) losing 20 scrimmage yards. 2) giving up a defensive touchdown on a lateral. I went back to the past 20 or so years of data to get historical probabilities on each:

With this loose logic, the odds works out to this being about 41,152:1 or a .00243% chance. For some perspective, the odds of getting a royal flush in Texas Hold-em is just shy of 31,000:1. So this was rarer and while I didn't confirm with Colby's league rules - I'm gonna go on a whim and say there's no bad beat bonus.

Let's play a little jeopardy category called: "Things that could have happened and Colby still would have won"

$100: One of two (either one - doesn't matter!) players on the Patriots thought to themselves "you know what, maybe this isn't the time for a lateral since the game is tied"

$200: Meyers still looses 20 yards (-2) and a fumble (-2), but Mac Jones tackles Chandler Jones instead of getting Mac-trucked

$300: Jakobi Meyers is not involved on the lateral, but the Raiders DST still get the fumble return for a touchdown (8 total DST points)

$400: Meyers gains five-yards after receiving the first lateral - doesn't lateral any further - looses a fumble, and the Raiders recover / score a touchdown

One last thing. The astute viewer of the screen shot video will have noticed a further detail that makes this all time bad beat even worse. I even confirmed with Colby to make sure it was true. Colby is a die hard Patriots fan. Not only did he get screwed in the fantasy world but also the real one. It's like his Sopranos-themed opponent Mikey Palmice rose from the dead to execute a hit putting Colby dead in the woods right by his side. Just unreal.

We'll never see anything like this ever again. We just won't. This would be a completely different story if there were still players left from Sunday or Monday night to give him a chance, or if the ten-point lead was just two or three going into the game's final play. But Colby's fantasy fate ended fittingly just like his Soprano's themed league where his team definitely owned Tony's character. Everything was going great. A victory was certain. Colby was probably sitting in a diner enjoying dinner with his family without a care in the world.