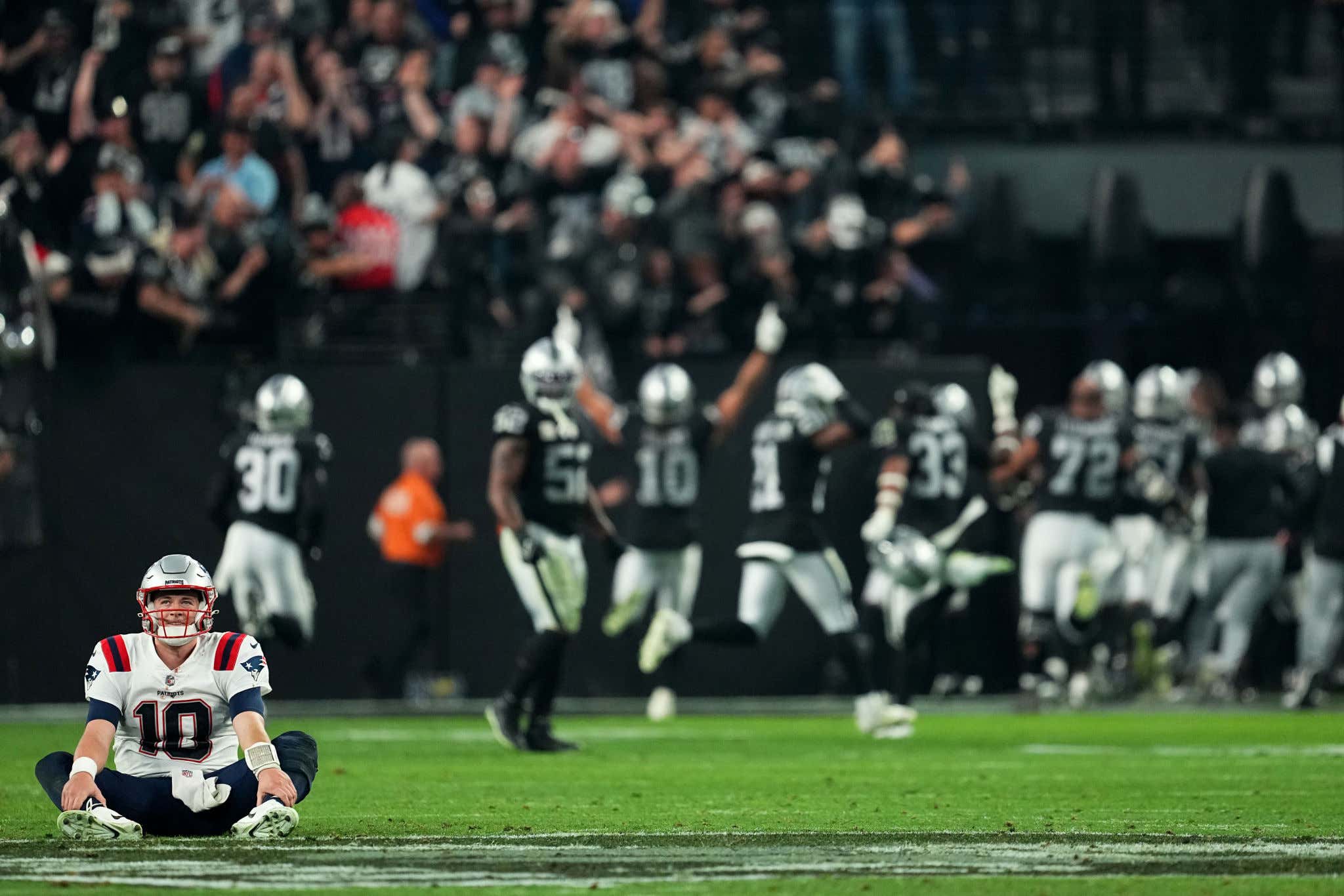 I don't know about anyone else but I'm already feeling major football/futball withdrawals after one of the most intense sports weekends I can remember. Saturday NFL football is back and holy hell did it deliver as we all saw the biggest comeback in history with our very own eyes. But honestly, I'm not here to talk about Deshaun Watson. I'm not even here to talk about how historic the Vikings win after trailing by 33 was, or how the falling snow late in the Buffalo / Miami game brought magic to the Bills as Josh Allen auditioned for the next Jackass movie by having his body carried like a rag doll to victory. I'm here, like I'm here every week, to show the dark side of that magic 8-ball. Here are the sad stats for NFL Week 15.

Sad Stat #1: The Colts second half point differential for the past two second halves (-63) is tied for worst since at least 1999 with… the Indianapolis Colts 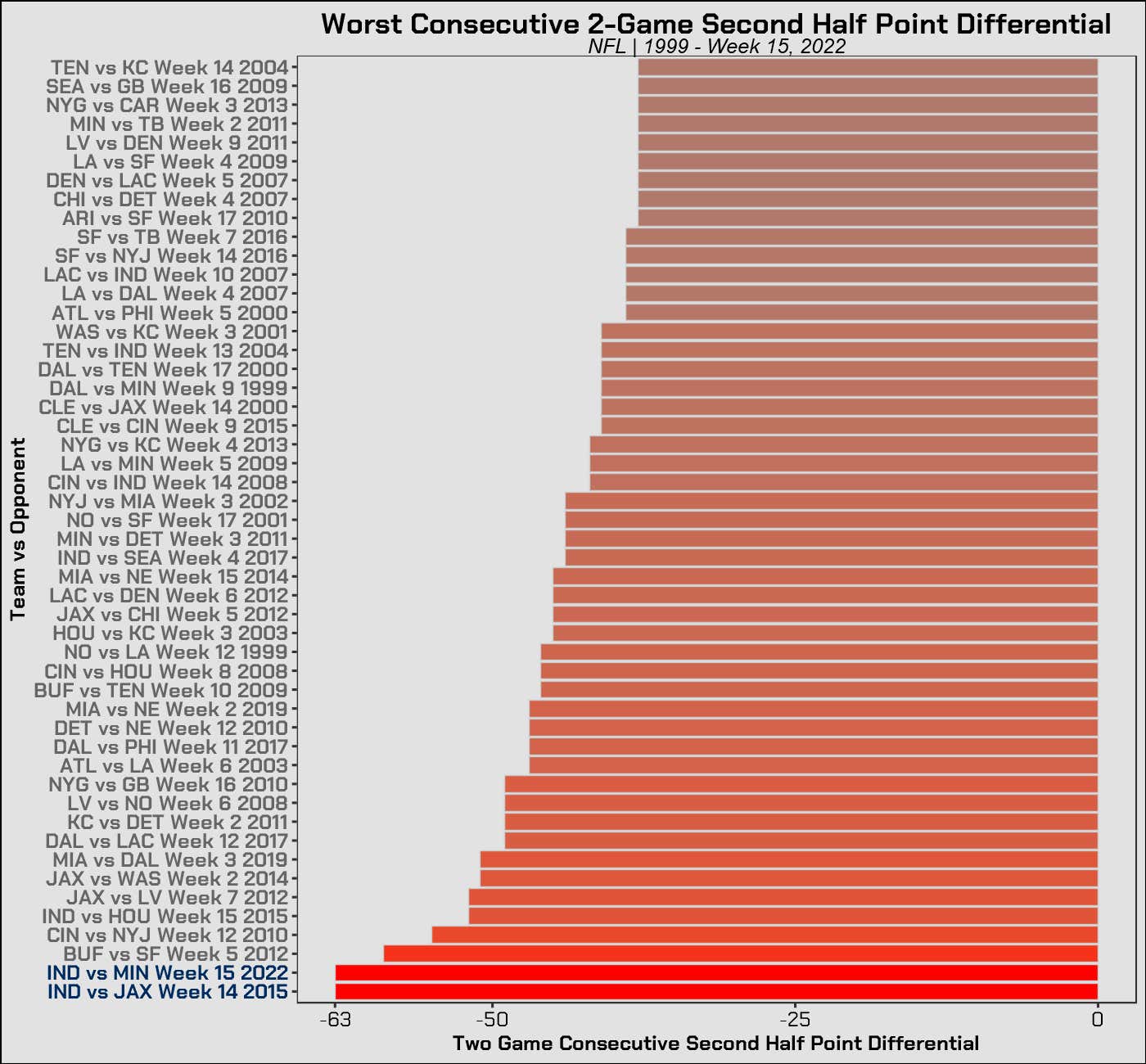 * note - only second opponent shown per team (ex: 'IND vs MIN Week 15 2022' bed shitting was after bed was already shat a week before vs. DAL)

This was a fun find. Well, not for Jeff Sadurday and especially not for Jim Irsay. But anytime some random screwy phenomenon occurs - like the Colts back-to-back second half bed shitting vs the Cowboys and Vikings - it's fun to learn that the only team to ever do something so abysmally inept was that very same team. I'd love to have been a fly on the wall at halftime in Minneapolis. Up 33-0, you just know Sadurday was dishing out the cliché "play like it's a 0-0 game" or "don't get complacent" spiels. That mindless dribble coaches think actually works. Here's a thought. Maybe they shouldn't have played like the game was close. Maybe 20 second half passes vs 19 rushes when up 33 with a quarterback who's so old he can't see ten yards down the field isn't the way to go. 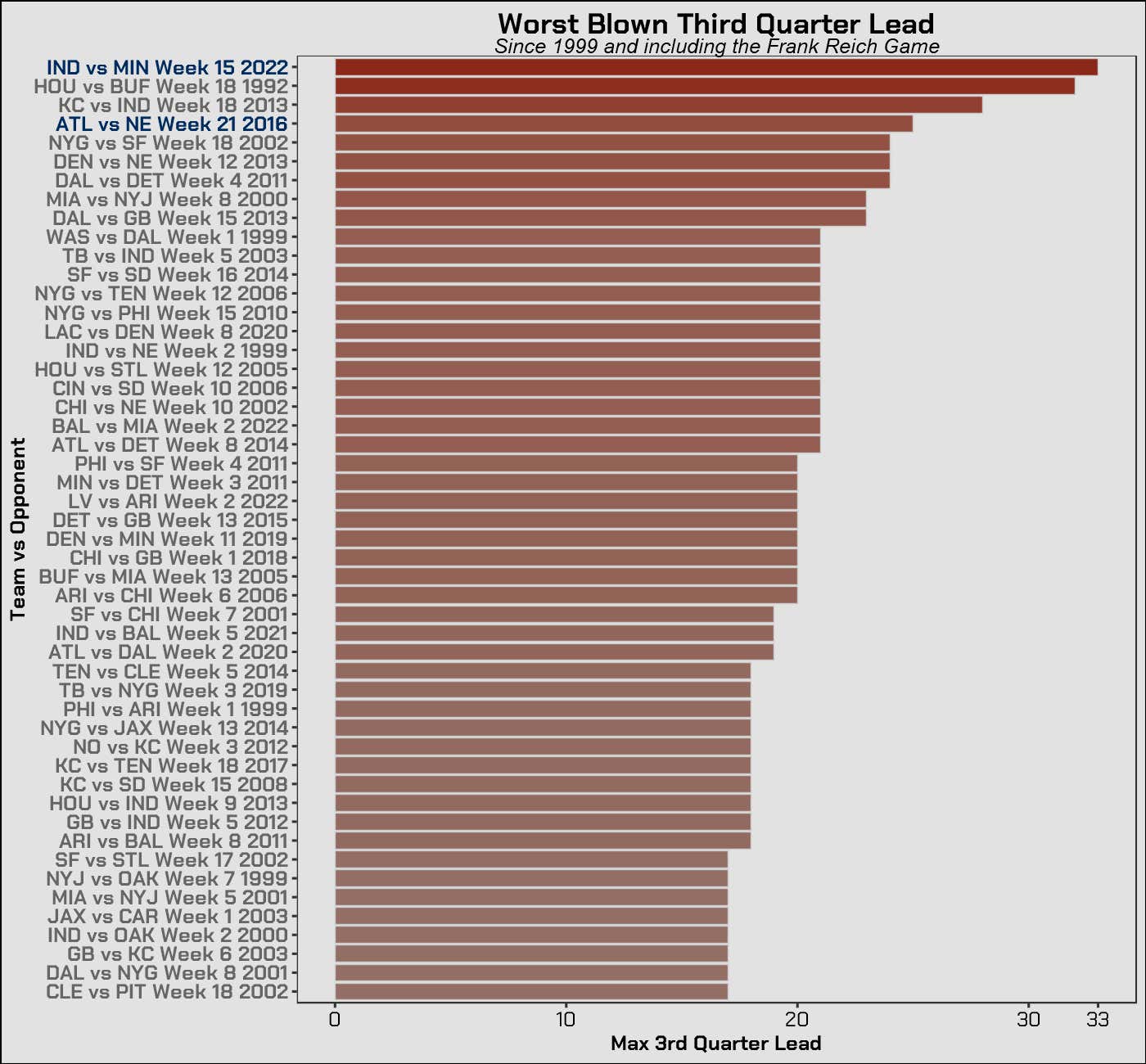 We've all heard this by now I guess but it's still fun to see. This is still just games from 1999 on except I cherry-picked the famous 1992 Houston / Buffalo Frank Reich game. Pretty brutal that four out of the top-five were playoff games with losing quarterbacks that never won a Super Bowl in Matt Ryan, Warren Moon, Alex Smith, Math Ryan, and Kerry Collins.

Sad Stat #3: I have nothing to compare the New England Patriots lateral to

I really tried on this one. I really did. But most players understand laterals are to be used for emergency use authorization only. And it appears the Patriots unprescribed use of it when not losing might have caused an outbreak after the Packers seem to have caught the bug on Monday Night Football too. I found 960 logged laterals since 1999 and only four others in which occurred in the final 20 seconds when the game was tied. But most of those were from defenses after a turnover where you could argue the situation presented itself. The only real comp is the 2021 Lions in the game they tied the Pittsburgh Steelers. On the final play of overtime they sent it with two laterals ending anti-climactically. But I think we can all understand the difference in an 0-8 team lateraling twice with nothing to lose by losing and a Patriots team scratching and clawing for a playoff share.

Quick plug - this colossal fuck up was also the catalyst for the worst fantasy football bad beat of all time as I uncovered earlier this week. Poor Colby. But what a good sport for letting me bring to light his epic darkness.

Sad Stat #4: Giovani Bernand's first play with the ball after a moderate load management period of 329 days ended in a loss of about seven yards

Oh yeah - and a fumble. Let's see how it went after a good year's rest:

Nothing like coming back from the dead to go right back in your grave. But Giovani wasn't the only running back from football past to re-emerge into football present in week 15. Royce Freeman came back after 350 days of no touches and when I heard Scott Hansen say the name David Johnson I legit thought the ghost of fantasy football past took me back in time to warn past me what was to come. Johnson did have a carry earlier in the year but I trust you'll all forgive me for not having Rams vs Saints high on my game priorities from Week 11. Anyway, shoutout to all the running backs of football past listed below making a cameo in 2022 - even the few at the top that aren't on the Baltimore Ravens. 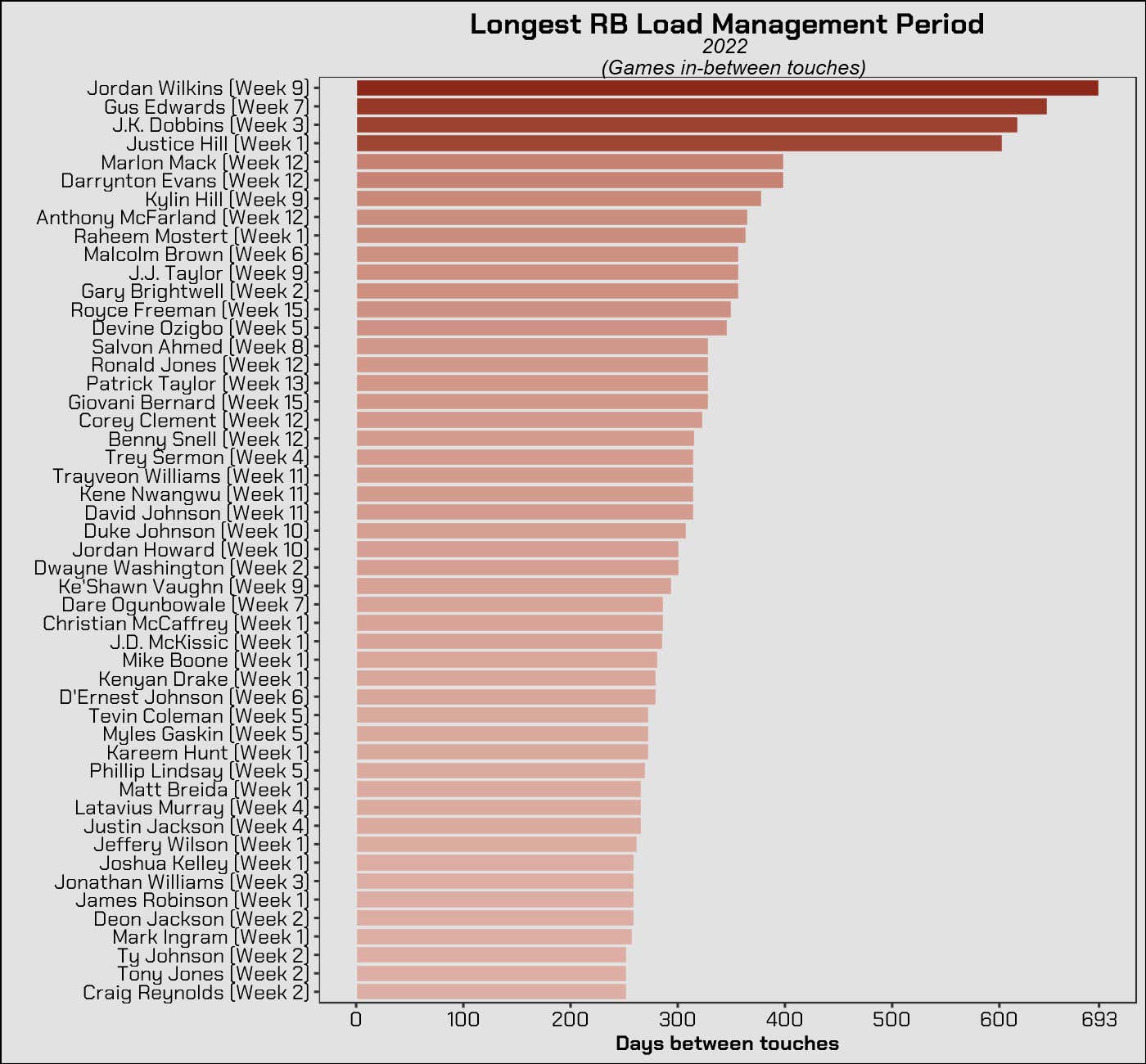 Sad Stat #5: The Bears and Commanders had the two saddest punts of the season in Week 15 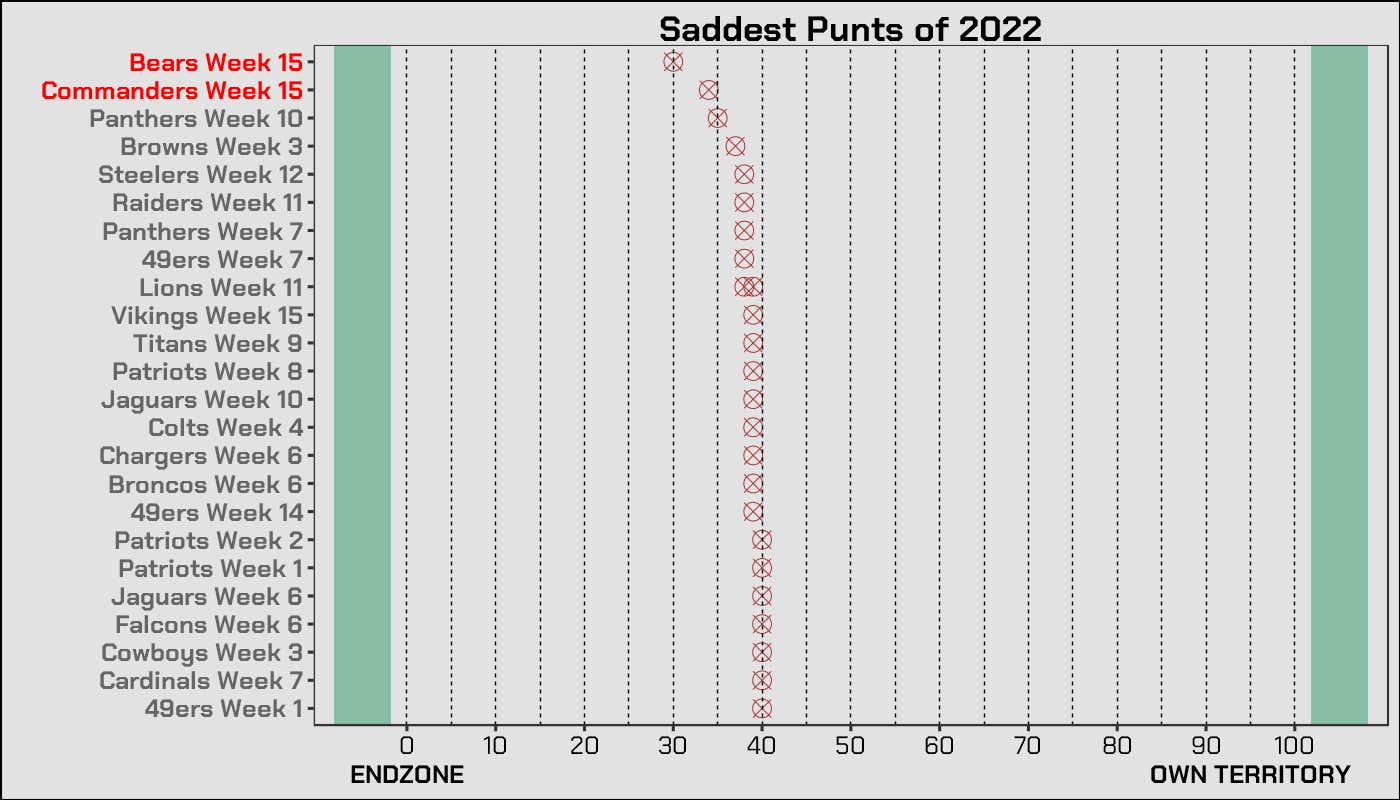 The ole gridiron chart above shows in order the 25 saddest punts so far in 2022 for the Bears and Commanders. Let's all be nice and not show this team PFT or Big Cat.

I sort of get it for the Bears. The Dolphins once tanked for Tua. The 2022 Bears have been sneakily tanking for pick two-a. I mentioned in Sad Stats Week 13 that they are 0-8 when down one score in the final four minutes this year. It's possible that's not a coincidence. I mean - they even gave up a touchdown on this saddest of the sad punts on the ensuing drive anyway. As for the Commanders, I'm assuming that was just all part of the script seeing as how blatantly set up things appeared at the end. What a shit show.

That's it for this week. Santa is coming to town very soon, so let's all learn from Ryan Tannehill's cautionary tale in Week 15 and try to stay off the naughty list and out of the naughty tent.