Fair warning to everyone reading this who doesn't give a shit about inside Barstool stuff, that's all this blog is. Don't say I didn't warn you.

There's been a lot of talk about "army's" recently in the Barstool Sports world (I know it's spelled armies but I hate the way that word looks, so I won't be adhering to the rules of the English language in this blog). In case you're not abreast of the situation (not sure if I'm using the word 'abreast' correctly), a "Twitter Army" is a group of Twitter users who do the bidding of another Twitter user. Barstool Sports invented them. This isn't a new thing either. It's been happening for a while. Up until recently, I had always found it funny, and relatively harmless. But then we learned that Rico Bosco was using his army to attack someone's wife. Jersey Jerry tweeted these screenshots to give us an inside look at the whole bat shit crazy situation.

It's still very funny. It's even funnier now. It's like a scary funny. Like a, "Haha what if somebody got murdered that'd be lunacy" type of way. It's scary that there are organized groups of people on the internet who "follow orders" and "carry out hits" for people. People they don't even know. I understand it's just words on the internet. But words are the first step on the road to deeds. They hurt my feelings every day.

But I wanted to get some jokes of. I certainly don't t have enough influence online to acquire a legion of people who would be willing to do my bidding.

At no point did a say that I am starting an army. I made 3 nothing tweets joking about the concept of one. Sure I might have replied to a few other people… and maybe I responded to a handful of DM's saying, "Consider yourself enlisted (salute emoji)"… ok so it was a little bit more than a few tweets. I got a little carried away with the joke. My point is, a few joke tweets and replies from a low-tier Barstool personality resulted in things like this… 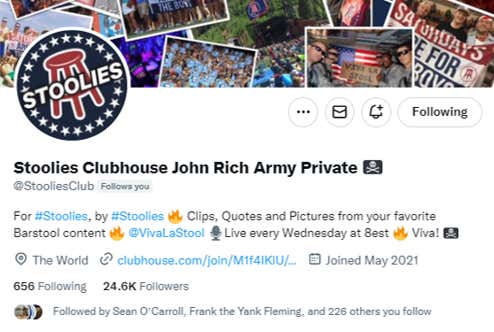 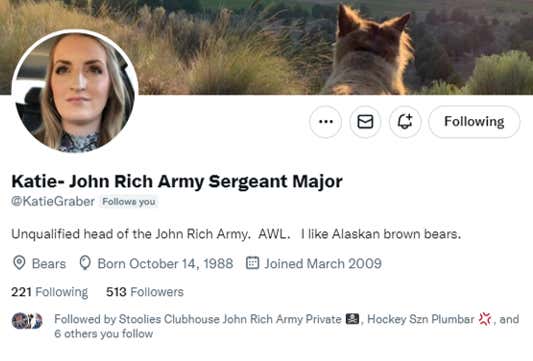 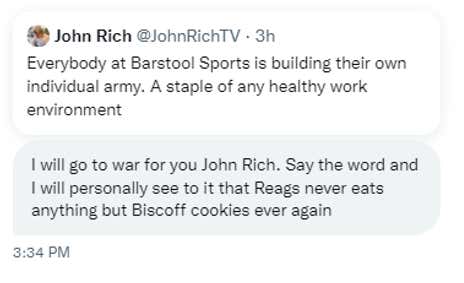 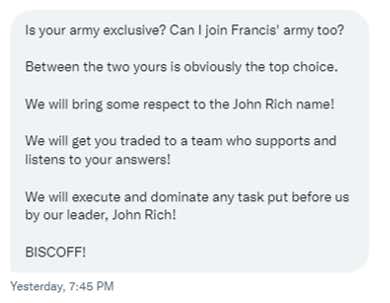 Then what is someone with an actual following capable of doing? I guess we see that play out all the time. My only point is it should NOT be that easy to acquire an army. People are just instantly down to ride for whoever no questions asked. That's a little scary. It all happened so fast. I got ever-so-slightly carried away with a bit, and less than 24 hours later I had cultivated my own army. It's not a ton of people or anything. I suppose it's more of a platoon at this point. And it's probably harmless. To me it's so obviously a joke that I would have an army of people online. Of course nobody is actually going to do anything. Never in 100 million years would I assign somebody a task. It almost feels insulting of me to insinuate that the people who have been joining the John Rich Army are doing anything more than going along with the bit. Maybe everyone who's tweeted about being in the John Rich Army is a sane person. I'm pretty sure everyone is kidding… right?

I'd like to think that's the case. Everything about the John Rich Army has been in good faith so far. Nobody on Twitter has done anything more than try to be funny with it. But who fucking knows what other type of people are out there. I tend to give people on the internet more credit than I should when it comes to knowing where the line is. Usually I don't even know. Which is kind of why the army thing is scary, because who knows what somebody might think is just a "joke".

What if I actually tried to use them? What if I put all these people in a group chat and said, "Make Caroline's life hell." I'm sorry, but as much of a joke as the whole thing is, there would absolutely be people who do that. Most people wouldn't, but it doesn't take that many people to make an impact on someone.

Maybe this is most unnecessary blog in the history of Barstool Sports. 99% of people don't give a shit about this. But I saw this tweet from KFC, who is someone I respect, and thought shit… what if someone actually does something on my behalf? I don't want to contribute to that. It scared me a little bit.

If someone like me can start a Twitter Army without even trying, think about what would happen if somebody did try. What if Brandon Walker stuck his army of Brandon's Boys on Ben Mintz. Oh my god that would be a blood bath. Brandon's Boys would ruin his life. Somebody would take it too far within seconds. I wouldn't be surprised if it led to an arrest.

Ok here's the rule of thumb for the John Rich Army. If you're thinking about tweeting at anybody on my behalf, just think, "Is this something that France would say?" If yes, then I'm sure it's fine. But if you're questioning it, and it feels like something that might come from any country east of France, then don't send it. Don't attack people. It's never cool."

Note: To everyone who comments, "Who are you?" to this blog. Thank you. That is exactly my point. If even I can do it, that's kind of scary..