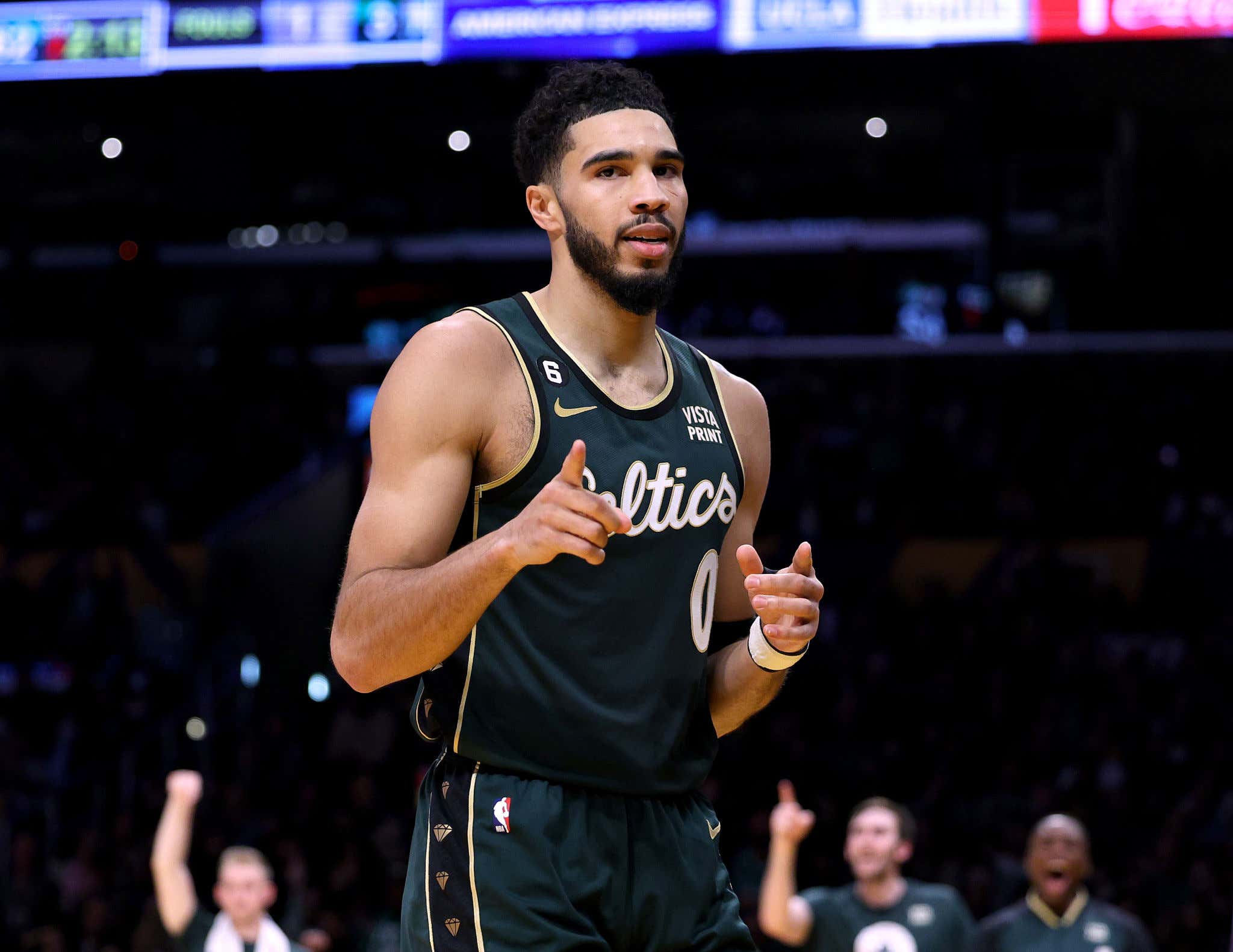 In 2022-23, things are no different. We have about 52 or so games left in the year to figure everything out so things will surely change over the next few months. But for the moment, it's clear who the MVP is.

When people hear me talk about Jayson Tatum being the MVP favorite, most just attribute it to my blatant homerism. I don't think that's all that fair, because it really only accounts for like 46% of why I believe Tatum is the current leader for MVP. It's not just me who thinks this, Vegas agrees with me. Tatum has the best odds right now for MVP and I'm pretty sure Vegas odds makers are mainling Celts Kool Aid on a daily basis like your's truly.

It's hard to argue against it to be honest. He has the individual stats to warrant being in the discussion, he's the best player on the best team, and most importantly, he has the narrative support through the first third of the year.

That's why I was interested to see the first iteration of ESPN's MVP Straw Poll. While these things should always be taken with a grain of salt, it does give us an idea of how media members are thinking. Considering they're the ones who vote on this thing, that's probably a good way to gauge things. If you're unaware of what this is…

To gauge where the race stands roughly a third of the way through the regular season, ESPN asked 100 media members to participate in an informal poll that mimics the NBA's postseason award voting process. To make the balloting as realistic as possible, there were at least two voters from each of the league's 28 markets, along with a cross section of national and international reporters.

So let's see how things netted out 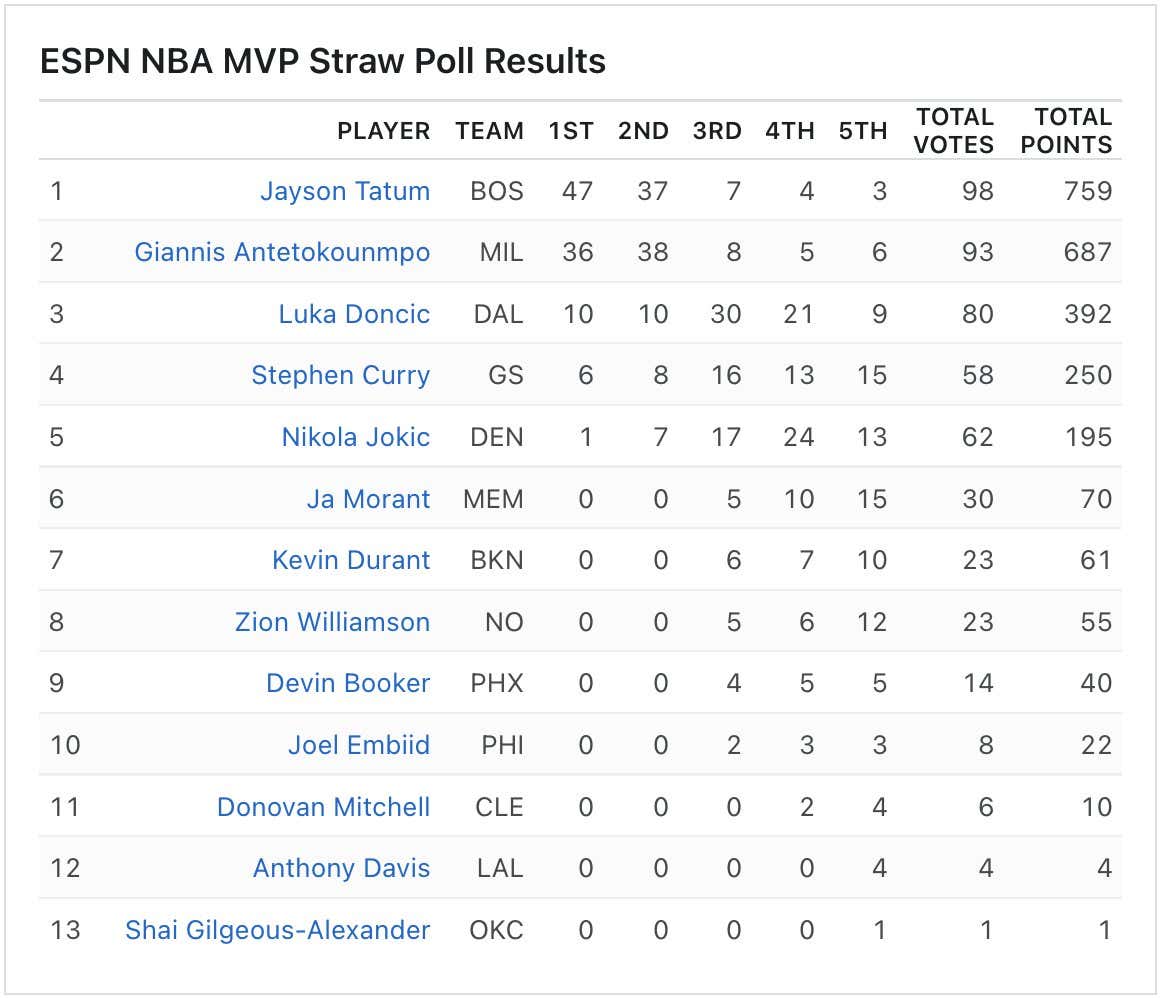 Weird, I guess all these media members are blind homers too?

Honestly, the top of this list wasn't too surprising if you've been watching this season. The biggest shock was that there were people who didn't have EITHER Tatum or Giannis on their ballots. Two people didn't vote for Tatum and 7 didn't vote for Giannis? How is that even possible. Feels like people just wanted to be different just to be different because there is no logical explanation for that.

My bigger question though is around someone like Jokic. Not only does he have the individual stats and the advanced stats, but he's also on a better team than both Luka and Steph. What's the argument that either of those guys are more deserving outside of the fact that Jokic won the last two? That's why I hate voter fatigue, it's stupid.

People will probably say it's the fact that the Mavs and Warriors are trash outside of those guys. Well….

Jokic should be Top 3 right now, let's not get stupid.

But back to Tatum if we could. Outside of his two stinkers against GS/LAC, the man has been on a mission. While we may have seen previous versions of Tatum that put up similar production, I think him being at the top of the list sends the exact message I want everyone on the Celts roster to understand.

When you win, everything falls into place.

All year both he and Jaylen Brown have been VERY vocal about how their only focus is getting back to the NBA Finals and winning the whole thing. Whatever happens along the way, so be it.

This mindset doesn't happen overnight. For this team to reach their pull potential I think we all agree that they have to adopt the "we not me" approach. The interesting thing about that is when we see a team do that, they get the individual recognition anyway. I think it took a few years for everyone to realize that. Last year was a great example, the team turned into a wagon and Tatum made 1st Team All NBA and Smart won DPOY. I'm sure they dreamed about both of those things happening at some point, but it took the winning to get over the hump. The same is going to be true this year for Tatum's MVP and Jaylen's All NBA selection.

I do have to admit, it is a little crazy to see a Celtic atop these lists. The closest we've really ever gotten while I've been alive was Isaiah's 2016-17 season, and he finished 5th in MVP voting. I missed the entire prime of Larry Bird, so this is uncharted waters for me.