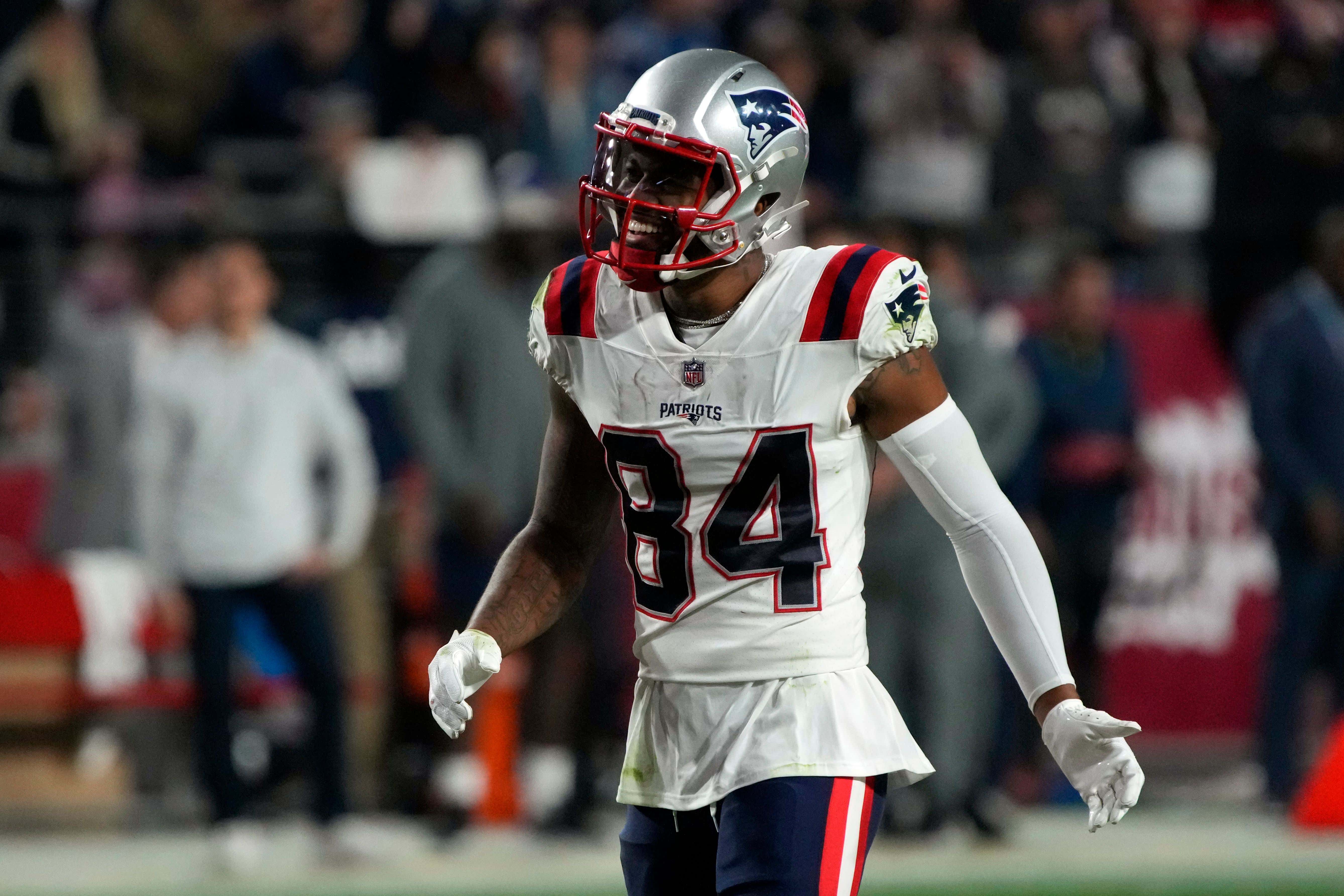 Last year, he quickly assimilated into the Patriots system, and became one of Mac Jones most reliable targets, He was, along with Hunter Henry and Matthew Judon, the best of a historic class of free agent signings that won Bill Belichick the Executive of the Year. He finished second in the NFL at his position at catch rate at 82.7%, and still managed a high yards per reception total at 14.1, which was Top 25 in the league. As a result, his passer rating when targeted was a remarkable 140.9, second only to DeAndre Hopkins.

Moreover, I loved the attitude he brought. It showed right from the first practice of 2021 Training Camp. Not that it matters as much as the actual production. In my old job worked with a lot of guys who were fun to be around, but didn't do a bloody thing unless they absolutely had to in order not to get reprimanded. In fact, I liked to think I was one of them. But good morale counts for something.

Just not for Bourne, it seems. His production has dropped way off under Matt Patricia. Whether it's been by accident or design, for long stretches he's been hard to find on the field. At other times, he's disappeared like he's the Statue of Liberty and Patricia is David bloody Copperfield. Between Weeks 5 and 8, he was targeted a grand total of three times. And after 13 games still only has 31 targets. Though, predictably, he's made the most of his meager chances, with a catch % of 77.4%. Still, his receiving yards per game are less than half of what they were in 2021. Not to get too technical, but the football jargon for a situation like this is, "Something's up with that."

Still, Bourne hasn't complained about his situation publicly. He has, however, added his voice to the boy band of teammates who have expressed their frustration with the play calling following the loss to Buffalo:

“Um, yeah, man, we need to scheme up better. We need to know what they’re doing. We need to know what they wanna do on third down, you know what I mean? It’s kind of sporadic. They call this, and we call that, and it falls right into what they want. You know what I mean? We need to have it where they’re falling into what we want, things like that. So that’s not my job, my job is to just run the call, but as we all can see, they had what — 30 first downs and we had eight? So something they were doing against us is working and something we’re doing against them wasn’t working, so it’s just about figuring it out each week. We’ve still got life, but we need to hurry and pick it up.”

Show me the lie here. Forget it. I'll spare you the effort. There's nothing but him spitting the sweet, heavenly loogies of truth on this one. Then proceeded to back it up Monday night in Arizona, going 5-for-5 on targeted throws and 9.4 YPR. Including tough but critical catches like this one to keep a drive alive:

Also he was immense in the running game, throwing tip-of-the-spear blocks on both long runs by rookies Kevin Harris and Pierre Strong, Jr. And in doing so, left all the expressions of anger and frustration fall to his QB:

Though now he's let it be known he did get called down to the Principal's Office for a stern talking to for not being more careful with words last week:

Phil Perry, NBC Sports - [Bourne] heard from his bosses following those comments, he told me after Monday's win over the Cardinals.

"Of course," he said. "I just gotta be careful with the things I say. Just emotions, too. Just saying how I feel and being careful … [Coaches] understand. I love this team. I'm riding to the end. I just want to win. That's all it is.

"That's from the heart. I don't mind, even if I'm on the bench, whatever. I just want to be there for my teammates. That's the heart I have. It's not about me. I just hate that it looks like that sometimes, but I think my guys know where my heart is."

Asked if he felt as though he and his coaches were "in a good place," Bourne said they were.

"I always think we are," he said. "Football is football. It's hard. We want to grow. You have to have tough conversations. You have to do tough things. Coaches have to yell at players. Players have to tell them how they feel. Things like that. It's so we can grow. It's all to grow. It's not to point anybody out. We're in a good place, man. That's where I'm at."

And you know what? I couldn't love this more. I don't mind at all that Bourne spoke out. Or that he got the Obi Wan, "Be mindful of your thoughts, Anakin" thing from whom I assume to be Belichick. Controlling the message and speaking with one voice has been a hallmark of the program here, and that doesn't need to change.

But by the same token, there is a time when a man's gotta do what a man's gotta do. The level of dysfunction with the offense needed to be addressed. I mean, it's not like Bourne was bitching about his contract, or bellyaching about how much hard work they put in here, or yapping about it not being "fun" like some malcontent. Adalius Thomas or Cassius Marsh. He's trying to make his team succeed. He's bought fully into the program, same as everyone else.

And, it would seem, his coaches were willing to listen, as his 42 snaps were the third most plays he's had all season and the five targets matched his season high. Because this Dynasty wasn't built on worrying about bruised egos and hurt feelings. It's about identifying problems and trying to correct them. And as far as I'm concerned, feeding this guy the ball more will go a long way toward doing just that.