If you're around my age (34 god damn years old), AOL Instant Messenger was a big part of your life. No, a HUGE part of your life. It practically shaped your childhood. You would get home from school, grab a snack, dial into the internet, and sign onto AIM. You would put whatever song you liked the most in your buddy info, usually something deep or sad like Dashboard. You would read the popular girls' infos to see what nickname they were calling themselves that week (shout out the '88s!) and to see whose initials they took out aka who they kicked out of their group. 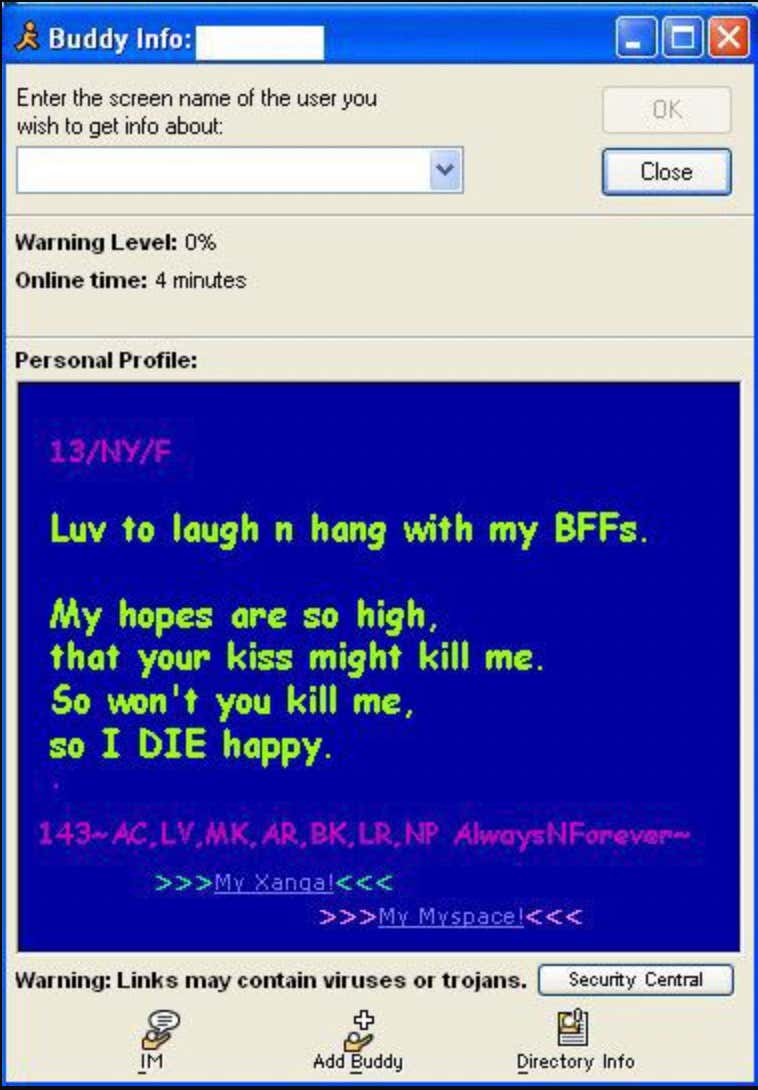 And of course you would sit there anxiously, waiting to hear that door opening sound, meaning your crush just signed onto AIM. It was the biggest "butterfly in your stomach" feeling a boy could have. Shit, even to this day, no feeling, not even seeing the 3 dots, can replicate the feeling of your crush "SoccerBabe1297" log on. Being 16 and having no idea what to do, woo boy. "Do I IM her first? Do I wait to see if she IMs me? Ok It's been 7 minutes, what if she gtg and now she thinks I'm ignoring her? But what if she's ignoring me?". I mean I guess it's sorta no different than modern day dating, but at least when you fuck it up now with a 2am "wyd?" text you don't have to see them the next morning in home room.

Honestly, I could type about AIM forever. It was revolutionary. There's so many little things about it people forget- buddy icons, SmarterChild, getting into "warn" battles. Lol, actually just thinking about that is hilarious. You and your friends could team up on someone and click that lightning bolt symbol and just get them booted off AIM for no reason.

If this doesn't bring back memories, she too young for you bro: 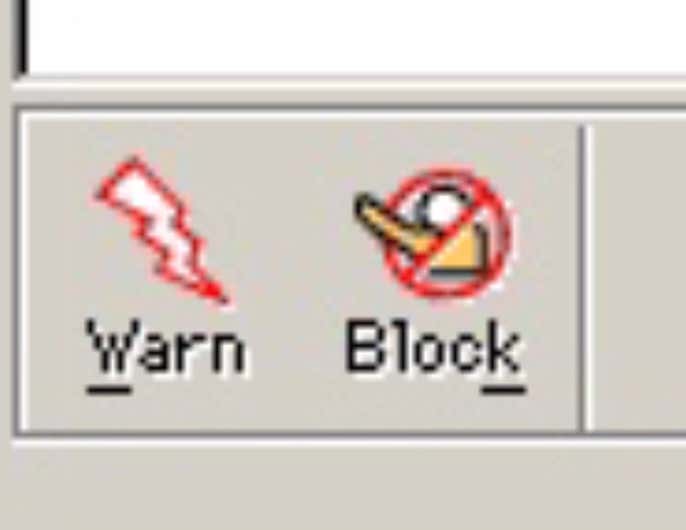 But the creme de la creme of AIM was the Away Message. It was Twitter before Twitter. A good Away Message separated the boys from the men. Sure there were the hipsters who thought they were too cool for school and would put up the basic "I am away from my computer right now" but I always thought that was lame. Bring the heat or don't bother putting one up at all. The Away Message was was people got their jokes off, had a quick personal life update, vented about how mean their mom was being, or again…an emo song lyric. Honestly, 90% of AIM was just emo song lyrics. 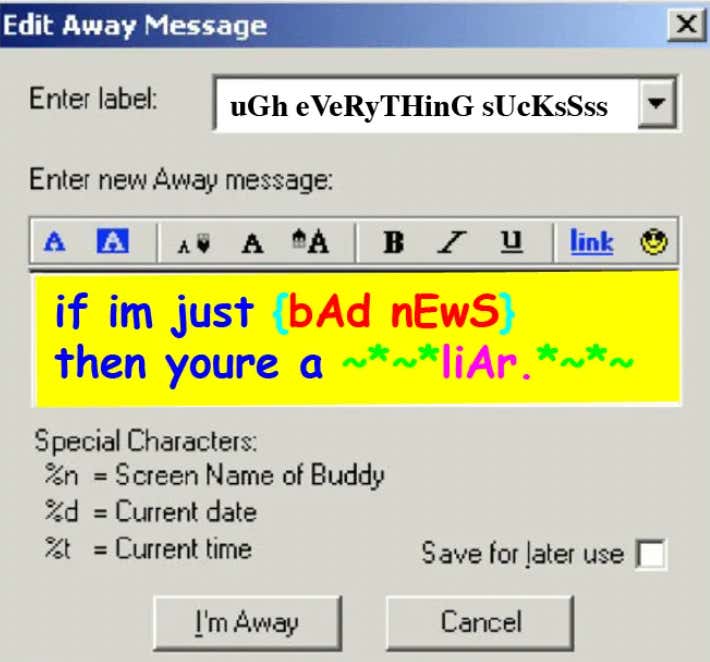 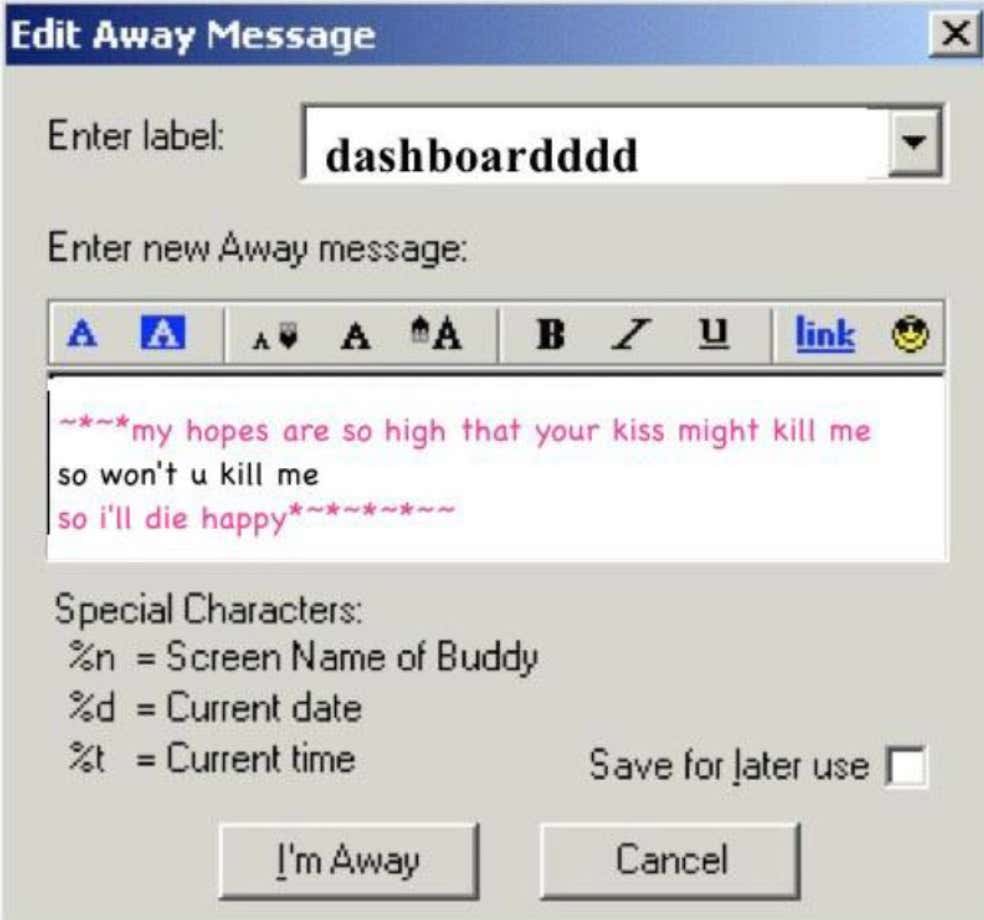 But after AIM sadly sailed into the sunset, we were lost and broken. Tweeting didn't fill the void. The Away Message was so unique, so special, that it didn't seem like it would ever be replicated. I always thought iMessage should bring it back, but they never implemented it. All hope was lost. Until this week, when out of nowhere, Instagram brought back the away message. And it is AWESOME.

HITC - Instagram just launched a feature called Notes and it’s reminding everyone of AIM Away Messages.

The new feature lets you share a 24-hour status with your friends that can be up to 60 characters long and contain text and emojis.

Notes appear at the top of the DMs tab and disappear after a day. However, you can change your Note whenever you like.

They’re a “new way to share your thoughts and see what your friends are up to,” Meta says – and you can write anything you want.

These are 3 straight from my IG:

After the AIM nostalgia aspect dies down I'm sure they won't be used quite as much, but for now I'm just enjoying it. 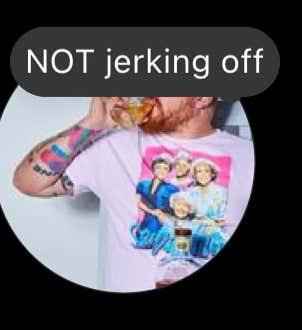 Thank you for the update, anonymous person!

At the end of the day, it's the little things in life. Maybe this will get old and tired after a few days, maybe it's actually a great idea, I haven't a clue. What I do know though is people are loving it right now, and what is better than that? People having fun online, a novel concept!