As you probably recall, Ninja has a very famous tweet about kickers. It's not deleted, but the man just can't understand why they can't make kicks all the time. 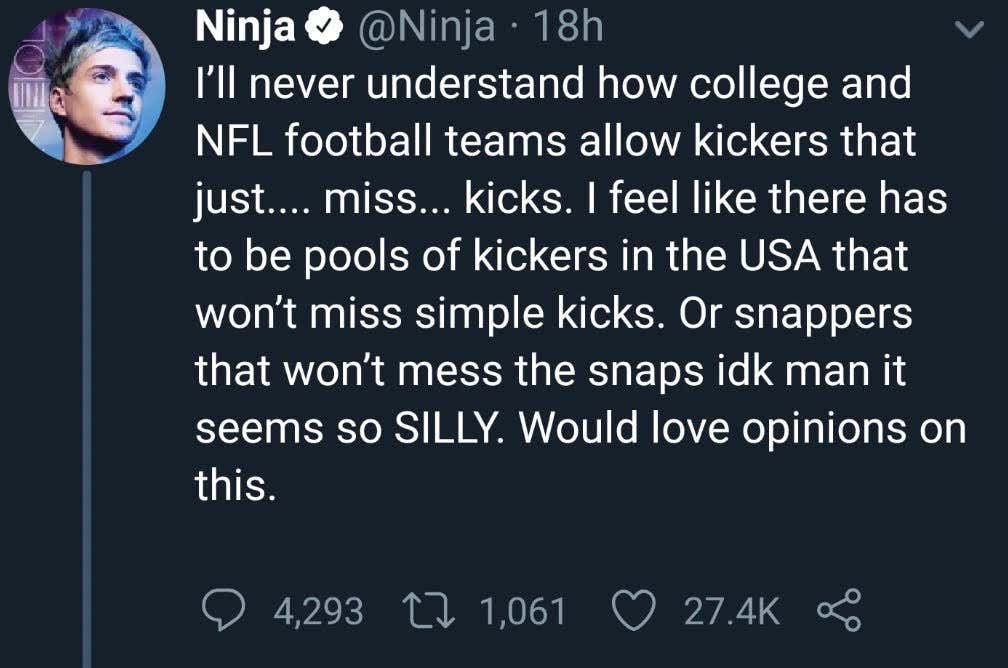 Gotta think Ninja feels validated now that one of the best players in the sport is essentially taking his side. Tyreek Hill explains how kickers go to practice, kick 5 field goals and decide to go play some ping pong. Kicking is so interesting. Your importance to the team is high up on the totem pole, but because your job is so simple no one really cares how you practice.

The whole battle is basically mental anyways, so what's kicking in practice matter for in-game situations? The goal posts are never changing. There aren't any plans to memorize or practice. Just kick the ball through the uprights.

It's so weird though because they are one of the most important players on the team. Like Justin Tucker is the reason why the Ravens probably have any wins this year. I feel like Jason Sanders the Dolphins kicker is going to have something to say about this but I feel like he knows this is true. I feel like offensive linemen have to detest kickers the most. They're out there busting their balls all game doing the dirty work, but barely get any of the credit.

I stand with kickers. It's a life choice. If I could play any position in football it would be a kicker and it's not even close. With my dumb brain not worrying about any pressure I'd probably be just as good as Tucker if not better.