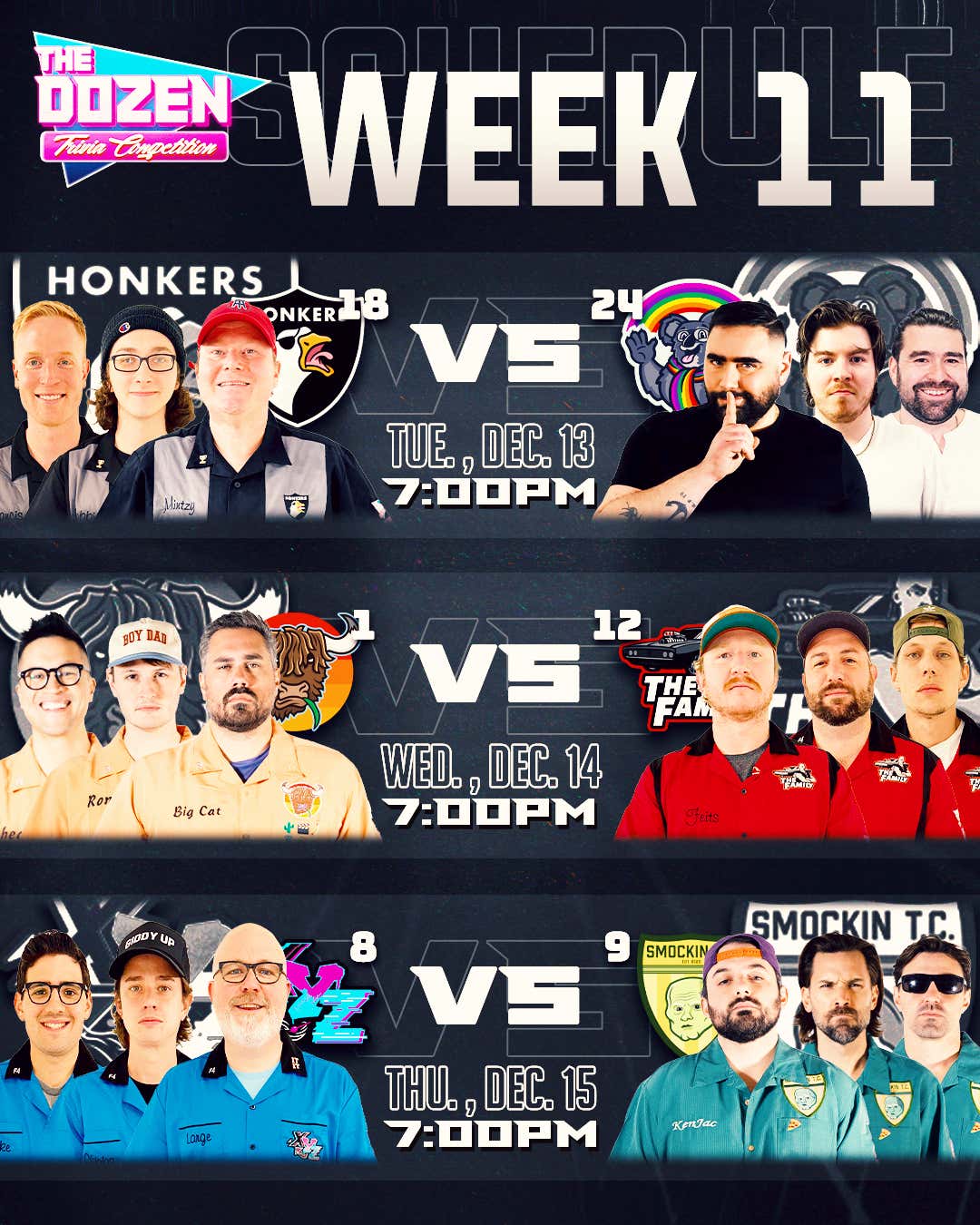 Week 11 of The Dozen is here. The Yak returns for the first time since the NY live show, the Big Screamin’ Honkers play to keep the original Dozen Champions out of the relegation zone, and Smockin battles XYZ in a battle between underrated squads. Our correspondent Scoops L'Aguirre has the breakdown…

Since Minty’s slip-up in the Season 2 tourney, things have gone downhill fast for the former champions. Coley left, and while Francis has tried his best to fill in, he still has not found his footing in the league. The Honkers are 0-2-0, having gotten blown out in their losses and been ranked outside the Top 15 for multiple weeks. They need to win. It would be crushing to see the league’s first champion get relegated.

Meanwhile, the Bois Boys Boyz had a tough debut, getting blown out by Swamp Ass, then had to see Swamp Ass get blown out themselves hurting both team’s stats, and thus, they now sit at the bottom of the league rankings. Bois Boys Boyz should be a good team as Joey is entertaining and has pop culture skills, JackMac is solid with sports and consistently gets used as a Phone-A-Friend, and Max has the power of Philly behind him. Sadly, they are already behind multiple 8-balls at this point.

The category to watch out for is College Football: it is both Mintzy and JackMac’s bread and butter, a steal by either team will decide the game.

After killing it in front of live crowds in Philadelphia and New York, The Yak finally makes their Season 3 Zoom debut against The Family. Big Cat, Rone, and Cheah are rolling. The Yak has been engaged and playing great trivia, except they have one major weakness: sometimes, when trying to put on a show, they take their opponents for granted.

The Family has already beaten Ziti and taken urMom to Overtime; beating The Yak would fully establish them as contenders in this league. Reags beat The Yak before as he carried The Misfits to a win over them in the Season 1 tourney. This match will be a high-scoring affair regardless of whether it is a Yak blowout or The Family barely edging out their opponent. You don't often have two teams where you can see every category getting swept.

John Rich and Steven Cheah will be facing off to see who can score the most points while also potentially sabotaging their own teams.

Based on numbers alone, Gen XYZ has been the best team during Season 3. They are averaging 15.00 points per game and have correctly answered a league-best 80% of questions. Unfortunately, Gen XYZ is encountering a massive issue this week; Smockin matches up perfectly against them as they share many of the same specialty categories, where many would argue that Smockin has an edge on them in most.

Gen XYZ typically Doubles either Music or Movies. KenJac is literally everyone’s Movie Phone-A-Friend, and Smockin has not missed their own Music question since the start of Season 2. Jake is a College Basketball guy, except he is weaker when it comes to pre-2010 stuff, whereas Titus has seniority and wisdom on him.

Smockin is a force in general, and if it weren’t for the Ask-The-Audience factor in New York, they would be holding The Crown. If XYZ can pull off this win against a nightmare opponent, they deserve to get ranked Top 3. 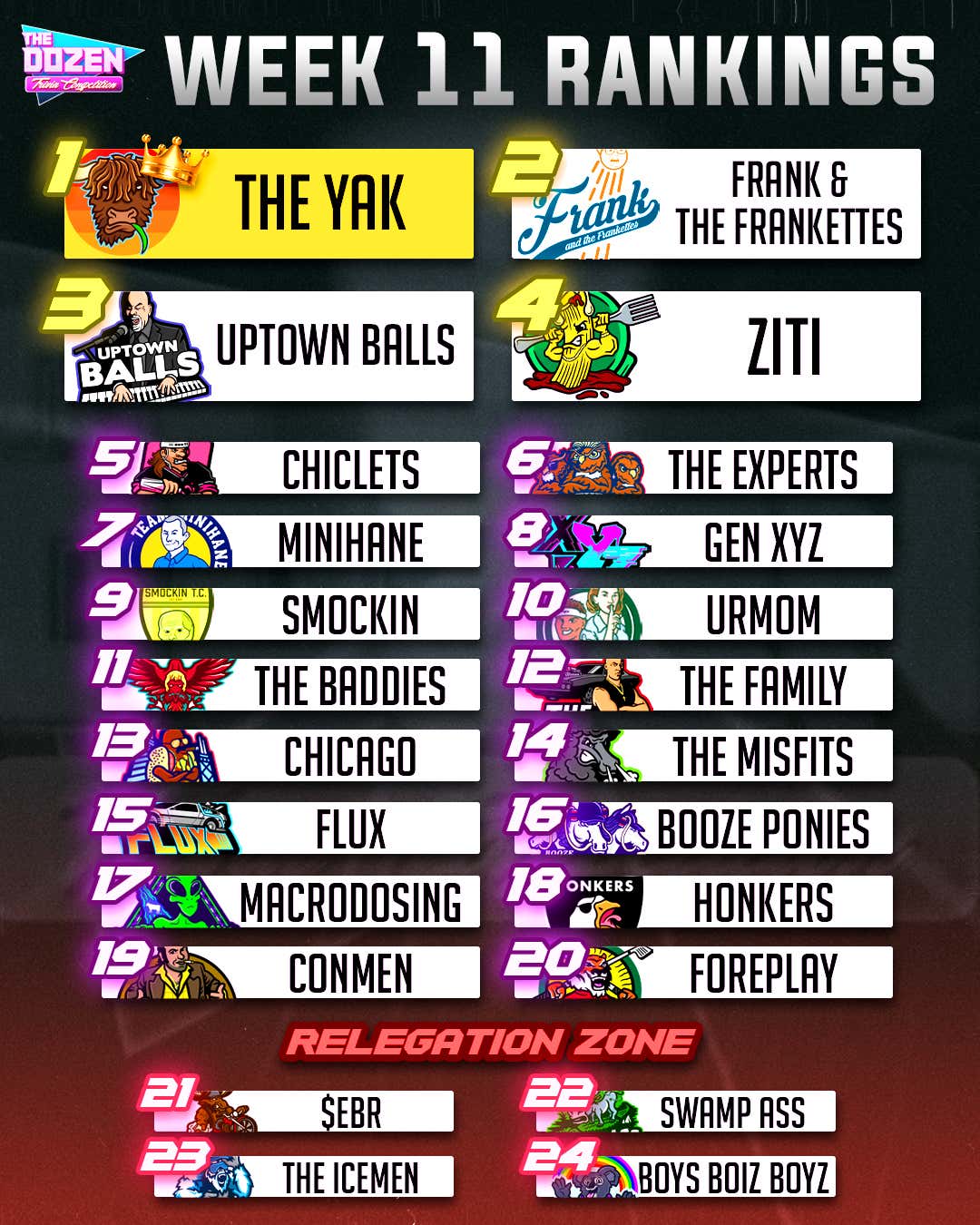 WEEK 10 PLAYERS OF THE WEEK 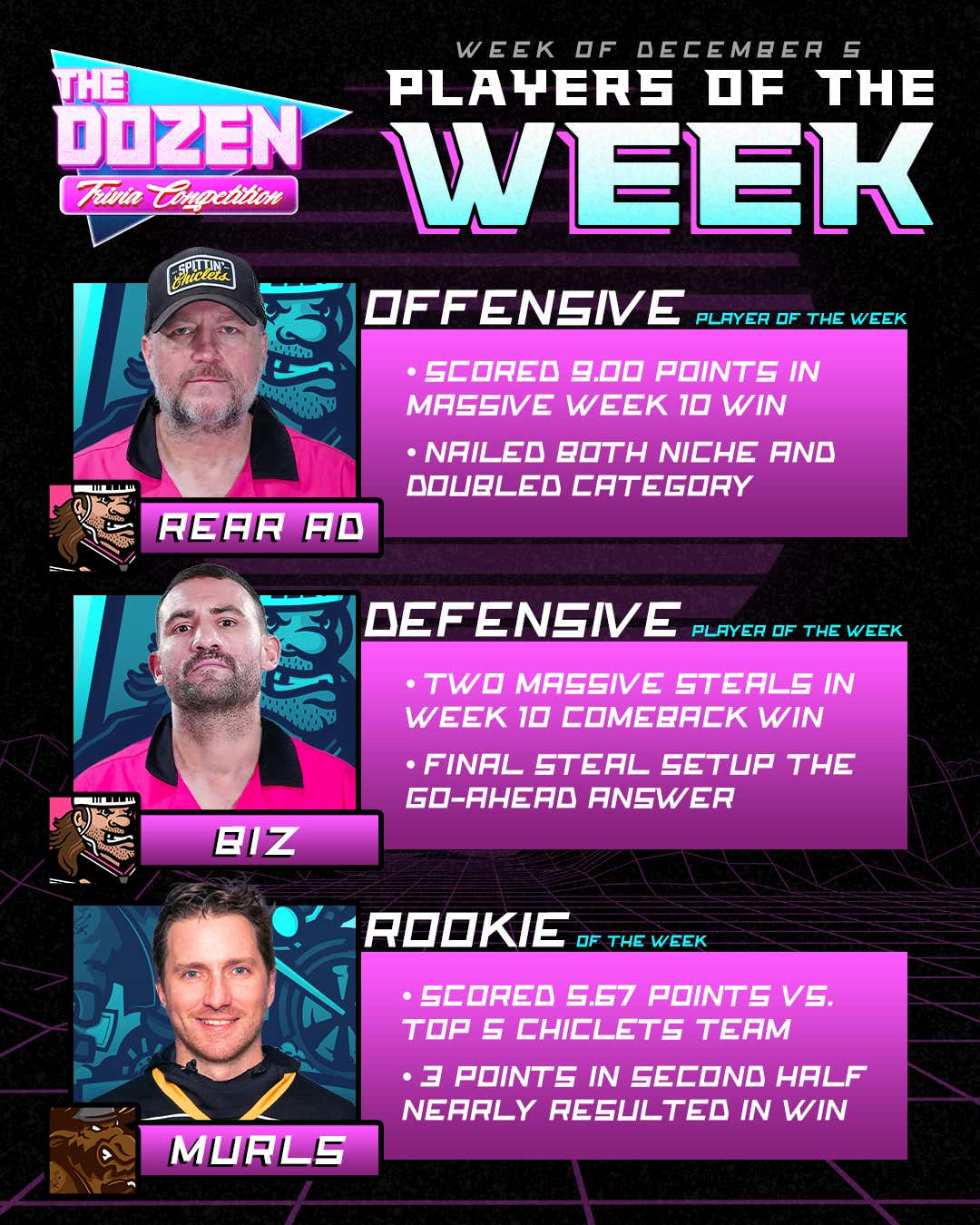