This morning two fucking losers looking to make a name for themselves stormed Barstool HQ and started shouting nonsense in hopes of getting attention and growing their names and brand. It's tried and true, when you can't make it on your own you use Barstool to try and get ahead.

They came into HQ and started shouting and screaming while filming a cringe video. The whole thing is just so strange, so stupid, so...I don't even know the words. I hate that society has allowed that person to get a platform simply by being annoying. It pains me to even write this blog because it's giving the person the clout and attention he craves so badly. It reminds me of Crocs Kid. Remember that asshole? Just does lowest common denominator nonsense and provides nothing of value to society.

So instead of talking about him and giving him the biggest platform he could ever wish for, let's talk about how the office reacted to it. Truth be told, the biggest regret of my life is my phone is broken and I was trying to get a new one while this all went down. I'll never forgive myself for not being there. 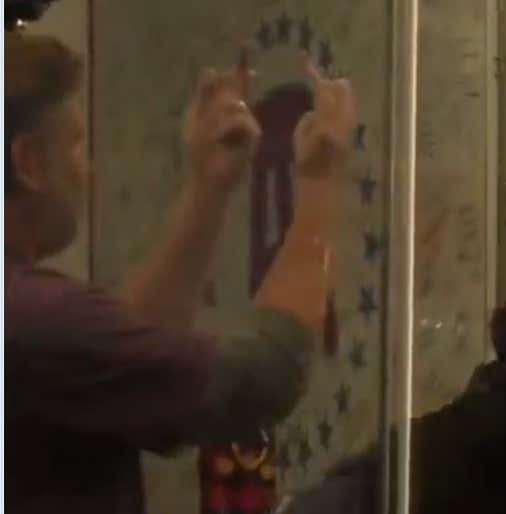 Brandon knows his limits. The man is 53 years old and his knees creak so loud his 2nd cousin sleeping right next to him wakes up in the middle of the night. That being said, he still got out of the chair and joined the melee, which is commendable. But closing it with the perfect double bird, Stone Cold Steve Austin style? That can't be taught. Perfectly executed from a place of hate. That was a double middle finger from deep down in his ever expanding gut. Every fight squad needs a Brandon Fucking Walker. #SaveRasslin 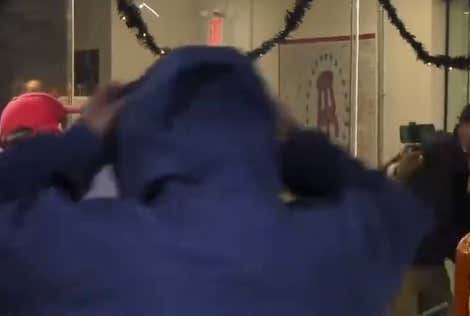 Big Ev is a man with nothing to lose. That was like a scene out of Breaking Bad- man put up his hood and was ready to GO. This is a man who has had Ohio State stomp on his heart, and he was ready to stomp on someone else's face to make up for it. He may have not gotten to throw hands, but the hood move was so bad ass you know he was willing and able.

Ok so this is going to be impossible to rank the top 3. Security Man Dan, Spider, and Marty. I'll do it though because I'm a man of honor. 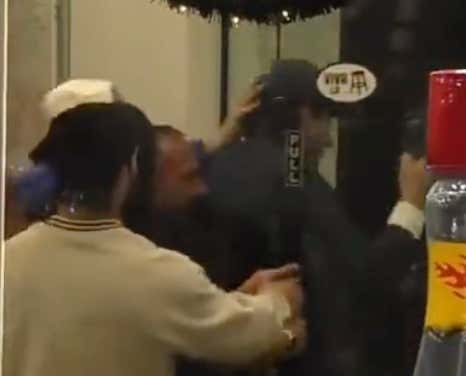 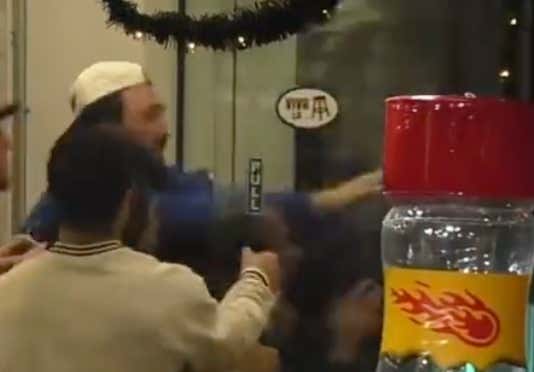 Marty apparently has been preparing for his life after Barstool because he tossed out the garbage with ease. He threw that asshole the fuck out, no two doubts about it. People give Marty a hard time and while sometimes he does bring it on himself, the man is ride or die. While some employees did the Homer Simpson into the bushes gif, Marty took matters into his own hands. Commendable, my friend. 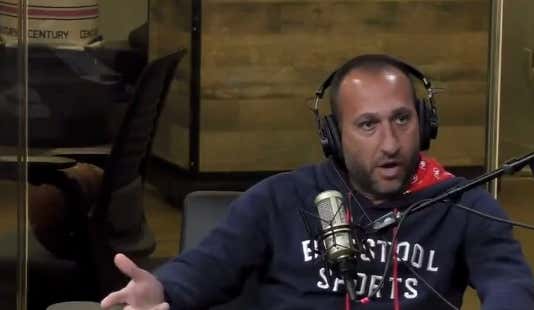 Gotta give Dan a ton of credit. He sniffed this out IMMEDIATELY. There's another video I won't share, but he went above and beyond keeping those pathetic drips out of the office. Now, his job is literally security so some at home might think he's being over-seeded, but the man can only do what his job entails, and he did it. And he did it without shooting anyone in the face, which probably took a ton of restraint. I mean all jokes aside, fucking CRAZY PEOPLE try to walk into Barstool all the time. Thank goodness this time it was just an annoying fuck after attention.

Why is Spider so beloved by everyone at Barstool? This is why. The Young King has more heart than anyone I've ever met. He will wage a war for his comrades in a heart beat, no questions asked. He didn't wait to see what was going to happen, he made shit happen. With Dan, he was the driving force behind getting them out the door. Spider is the one who knocks.

I also have to give a shout out to Ebony and Tiko. They got involved more after this video cuts out and due to the fact I will not post that guy's video unfortunately you didn't see it but they got him into the elevator with FORCE.

And then there's the other side. 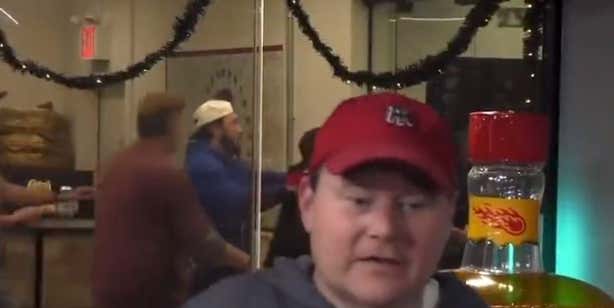 When the going gets tough, apparently Ben Mintz gets going. So sad to see. I know Ben loves Barstool. Or at least I thought I did. Now I don't know how to makes heads or tails of him. He saw HQ under attack from an outsider and he turned away like a vegetable just walked through the doors. To say my heart is broken would be an understatement. After he infamously befriended Alex Stein over the summer, we thought Mintz learned his lesson- Family is everything. But I guess the elephant walk they did at the frat house is a bond thicker than Barstool.

In fact, some are saying it's an inside job and that he actually GAVE HIM THE KEYCARD TO GET INTO THE BUILDING!

Needless to say, the boss is less than thrilled with Mintzy right now. 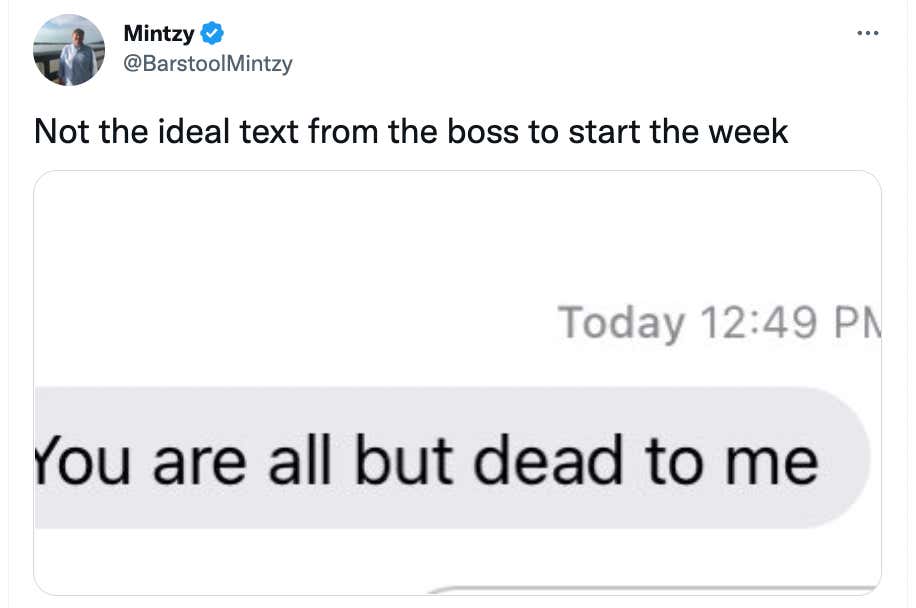 Will Mintz be able to bounce back from this? We shall see.

And I'd be remiss if I didn't give a special award to Smitty:

Father Of The Year: Smitty

Smitty sitting there, looking around and just going "yeahhhh…I don't get paid enough for this shit" is so perfect. This man, I shit you not, talks about his child's health insurance more than anyone I've ever met. He doesn't do a single thing without wondering how it will impact his kid going to the doctor. And I think it's commendable as hell. Smitty knows where his bread is buttered- and the pasta stand in Malvern does not have benefits. Dude just wants to talk sports, gamble, and take his child in for a checkup. Live to see another day, the Barstool Smitty story.

And one last thing- Stein is very lucky Security Guard Dan was here and not Security Guard Mike. Dan handled things with force, Security Guard Mike would not have been as gentle. If there are going to be copy cats of this, you better check to make sure Mike isn't here when you do it. He lives for things like this and I doubt a vlog is worth dying over. But then again when you're as pathetic as Alex Stein, it just might be.