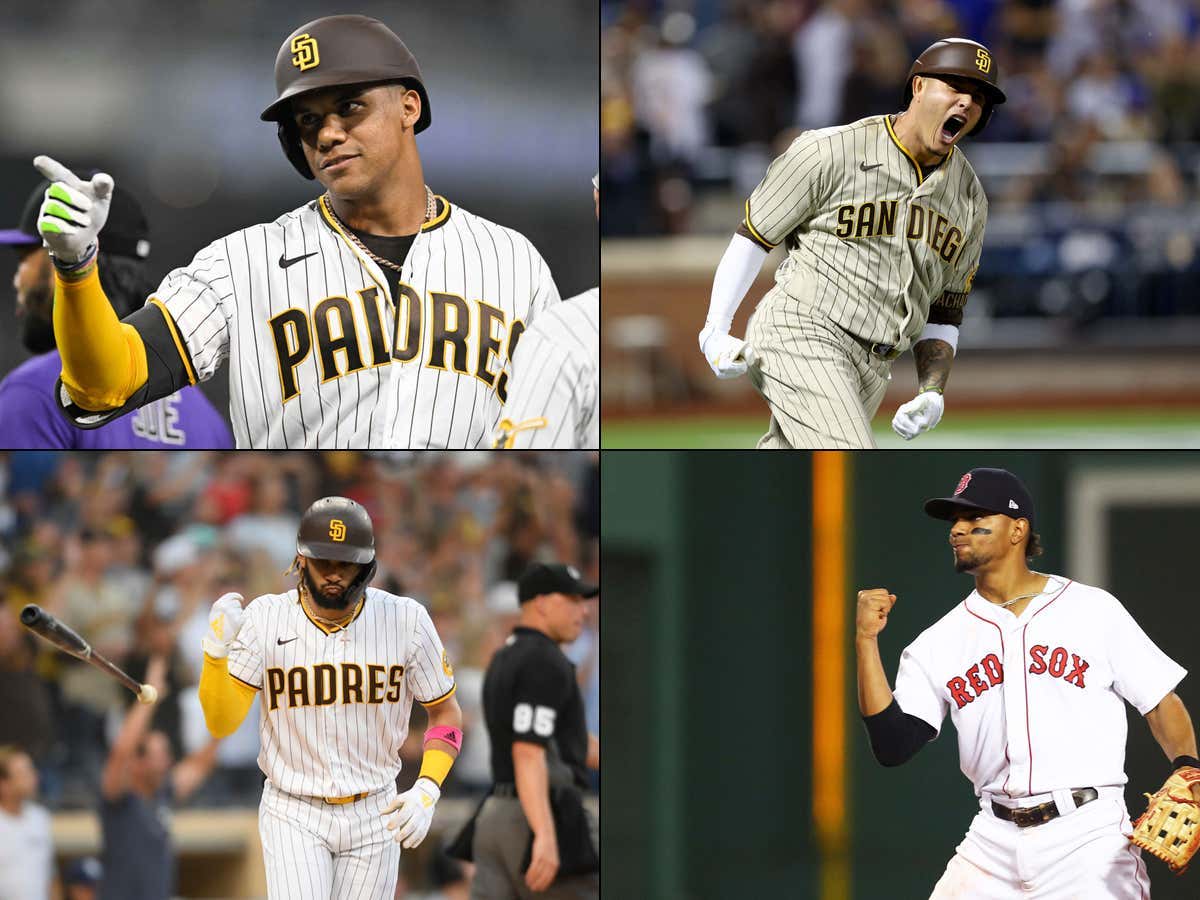 Late last night the San Diego Padres proved that if you continue swinging hard and offering a quarter of a billion dollars+ to various big name players, at some point one of them is going to take it. With Xander Bogaerts now in the fold on a brand new 11 year, $280 million contract the Padres boast a potential lineup that includes Juan Soto, Xander, Fernando Tatis Jr., and Manny Machado. AJ Preller is a mad man and won't rest until he's achieved world dominance.

The question everyone is asking is how the fuck are the Padres doing this?

Xander Bogaerts very clearly did not achieve a $300 million contract. If he did, the Padres would also not have been the first team to have three guys making $300 million. The Yankees did that when they inked Aaron Judge to his $360 million deal earlier in the day. And for anyone unfamiliar with grammar or the English language, in that tweet Bob is not saying the first team with three infielders making $300 million. The "infielders" part of that sentence is a characteristic of the players, not a qualification. Just an incredible tweet from Bob. When you least expect it, he comes out of the woods with another gem. Please never change.

Okay, back to the Padres. How are they doing this? Well first let's look at the contract situation on all four of their stars.

All the credit needs to go to owner Peter Seidler, the grandson of Walter O'Malley (you may know him as the man who brought Dodger baseball to LA). Peter Seidler represents what every MLB owner should strive to resemble. His net worth hovers around $3 billion, stemming from his private equity firm, which slots him in the middle of the pack among the rest of baseball's ownership group. You may see him being worth $3 billion and say "no shit he spends a lot" but that's sadly not the case with more than a handful of other rich owners in the sport. Some guys sadly just care about their bottom line and turning over a profit. Even though the Padres don't play in a huge market like New York or LA, they certainly spend like it. Seidler gives his GM AJ Preller the green light to do whatever it takes to make the Padres a true contender. That permission has resulted in Xander, FTJ, Soto, and Machado in the same lineup, for now.

The reason I say for now is what's to come. Manny Machado has an opt out coming up at the end of the 2023. Barring a disaster year or major injury he's expected to execute that opt out and re-enter free agency. Coming off an MVP runner up year and entering his age 32 season Machado should be able to do much better than the remaining 5/$150M left on his deal, especially if someone like Trea Turner is getting 11/$300M this offseason. This Xander move could very well be a backup plan for Manny's departure.

There's also a chance Manny just gets more money from the Padres because fuck it why not? If that's the plan then this could be a sign that a trade is about to come into the picture. Enter one Fernando Tatis Jr. in the midst of his steroid suspension. There's no denying the talent the soon-to-be 24 year old possesses. So far in his first 273 MLB games he's posted a .965 OPS. Yes, he's currently serving a PED suspension, but I'm pretty confident he's an insane hitter with or without the juice. Fielding, injuries, and immaturity are his issues. Prior to the suspension Tatis Jr. was already being moved off shortstop and into the outfield due to reoccurring shoulder issues and a mountain of errors. The problem with that? Tatis Jr. has adamantly said he's a shortstop and probably doesn't want to play the outfield. He didn't look happy playing a different position last season. Now with the Padres he's lost that leverage. He has no say in the matter moving forward with them about his position which can be seen pretty clearly with the signing of Bogaerts.

I think the Padres are going to trade Fernando Tatis Jr. this offseason. I believe he's become way too much of a headache for them and it's pretty clear they have enough talent to win without him. Hell, they knocked the Dodgers out of the playoffs while he was away from the team this past postseason and now they added Xander to the mix. While the talent is there I'm sure they'd love to dump his salary and give it all to Soto so he's locked up forever. In theory they could hope he changed his attitude and see if he adapts to the outfield, but then you run the risk of further tanking his trade value if it doesn't work.

So what does a Tatis trade even look like? How much money is San Diego eating on that deal so that they get back any resemblance of talent from the other team? Don't tell me there aren't teams out there who wouldn't pounce at the idea of adding him to their squad. We're talking one of the premier hitters in the sport who is gonna be 24 years old. He can immediately become the face of your franchise. Is there baggage? For sure, but it's definitely worth your trouble if he can mature a little bit and stop riding motorcycles. $24M AVV for a guy of his talent is an insane steal if you can get his mind right. Give up some solid prospects in return and that number probably drops even more. And yes, Tatis has a no trade clause, but let's say he doesn't want to play outfield for the rest of his career. You don't think he'd waive it to go elsewhere and do what he wants?

Then again, the Padres are maniacs. Maybe they just keep everyone? Soto gets his $400M, Machado re-ups for something like 7/$245M and San Diego rolls out a preposterous lineup for years to come. It's truly something when a baseball GM decides they want to play ball. It's also a sight when you see someone like John Henry over in Boston randomly decide he no longer wants to do anything of the sort. Since winning the World Series in 2018 he's hired a small market GM to let Mookie Betts and Xander Bogaerts, two cornerstone players, walk for basically nothing. Signing Trevor Story to let Xander go will never make sense to me. You'd think they would do everything in their power to retain Rafael Devers, but people thought that about Xander too. I genuinely don't understand what they're doing over there.

While a Fernando Tatis Jr. trade should be something Chaim Bloom explores to replace Xander and keep the fans happy, maybe he takes another route? How about a gold glove defender who loves to put the bat on the ball and hustle?

Even had a homer over the Monster this past season so you know he'd be comfortable. All your answers are right there in front of you, just pull the trigger Chaim.

TLDR: Every owner should be like San Diego's Peter Seidler