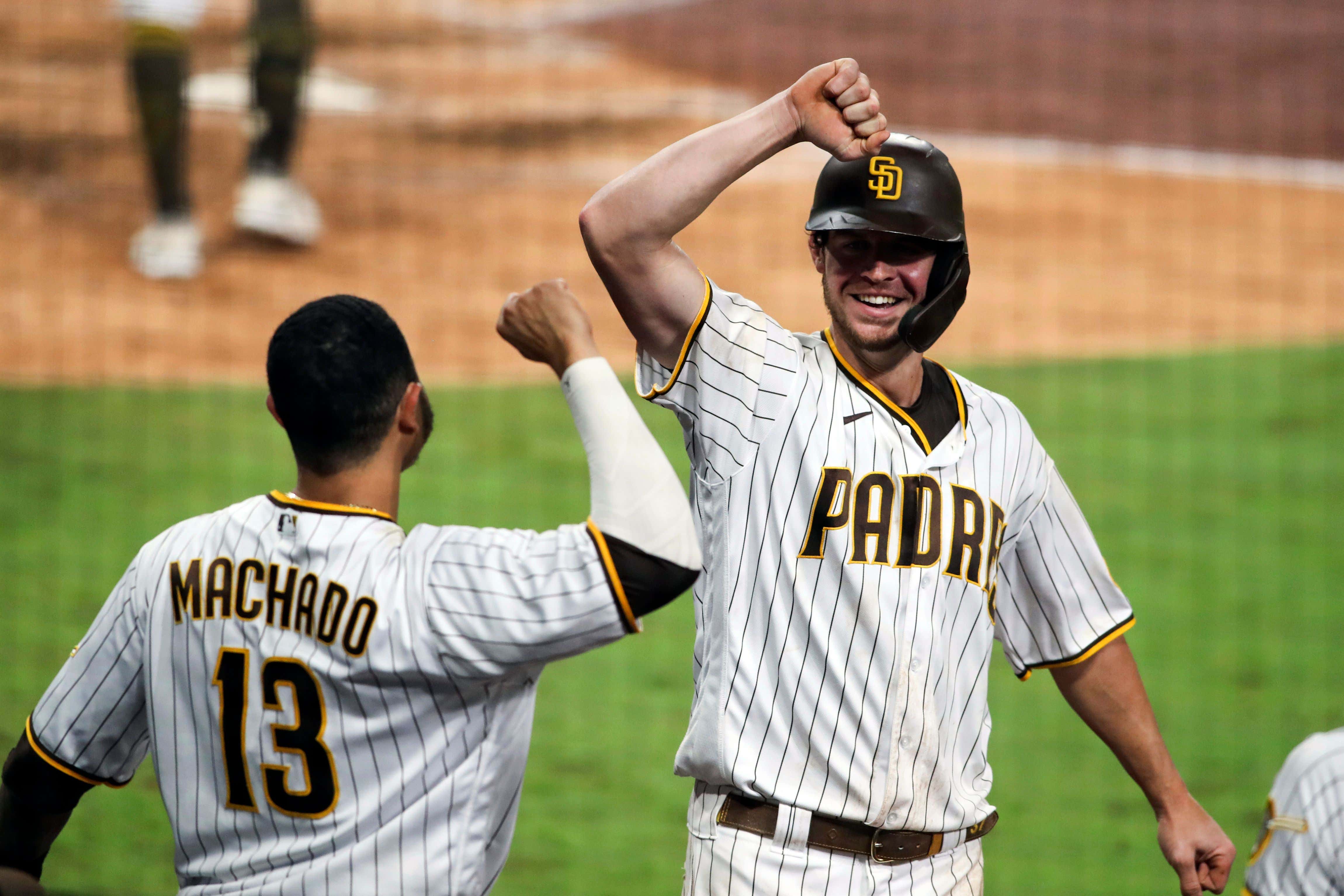 There are two weeks left in the regular season but we've got a potential finals previews with the 1st place Wil Myers taking on the 2nd place and points leader, Mike Moustakas. 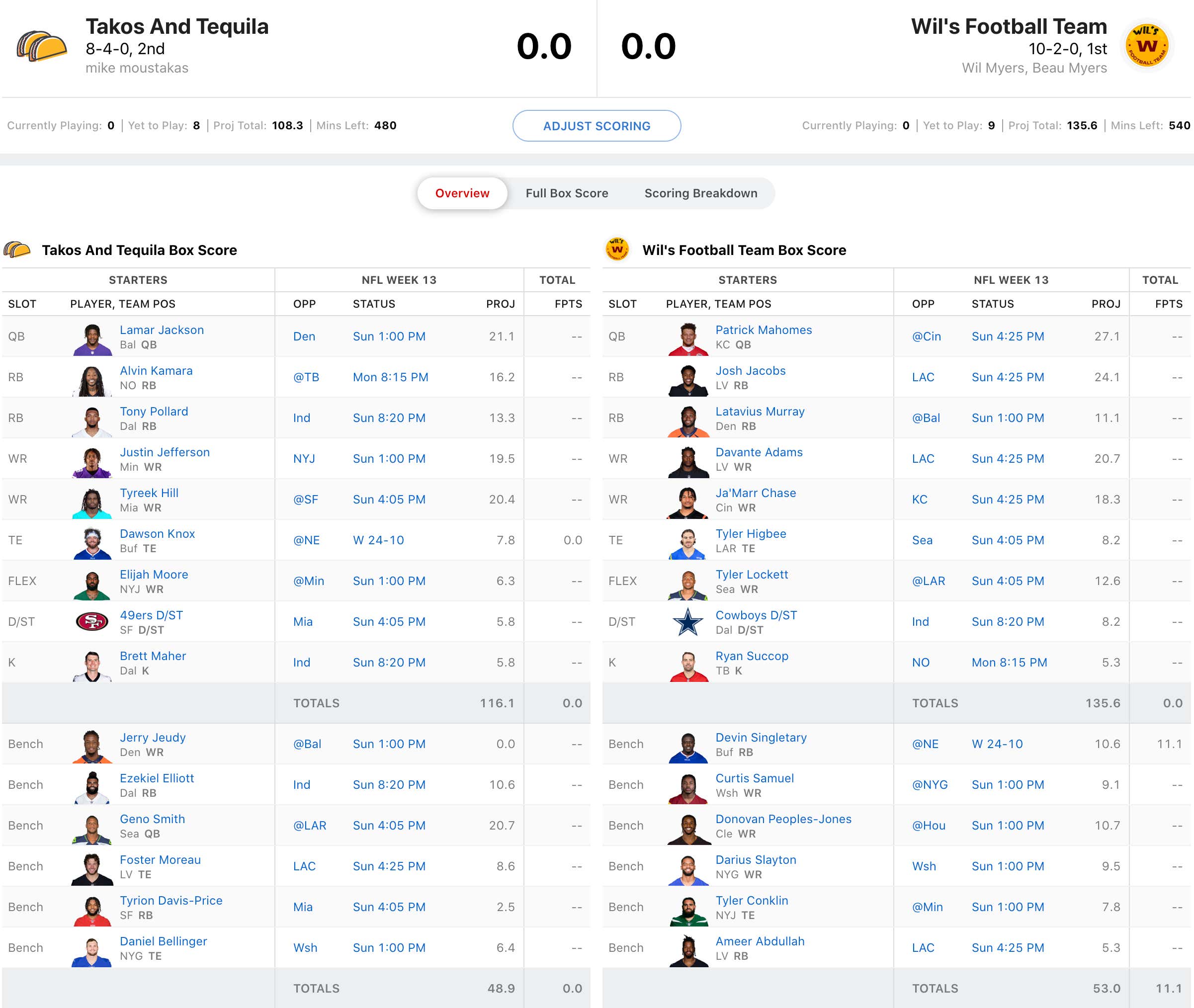 Moose got off to a rough start with Dawson Knox putting up every fantasy manager's worst nightmare, a Thursday night donut. He's got some absolute stallions on his team with Tyreek Hill, Justin Jefferson, and Lamar Jackson, but they've all got fairly tough matchups this week. I do think Hill has a big game, but Jefferson gets a stingy Jets D that features a superstar CB in Sauce Gardner and Lamar Jackson gets one of the league's best defenses. Meanwhile, Wil Myers has a dream matchup with Patrick Mahomes going against the Bengals in what should be a shootout and Josh Jacobs and Davante Adams in a key divisional game that should be high scoring. And he gets Ja'Marr Chase back vs. the Chiefs. So for all those reasons, I gotta lean with Wil Myers who will clinch the #1 seed with a win.

Waiting in the wings is Jake Marisnick who is poised to jump into the #2 slot with a Moustakas loss if he can handle his business against the streaking Mike Napoli. 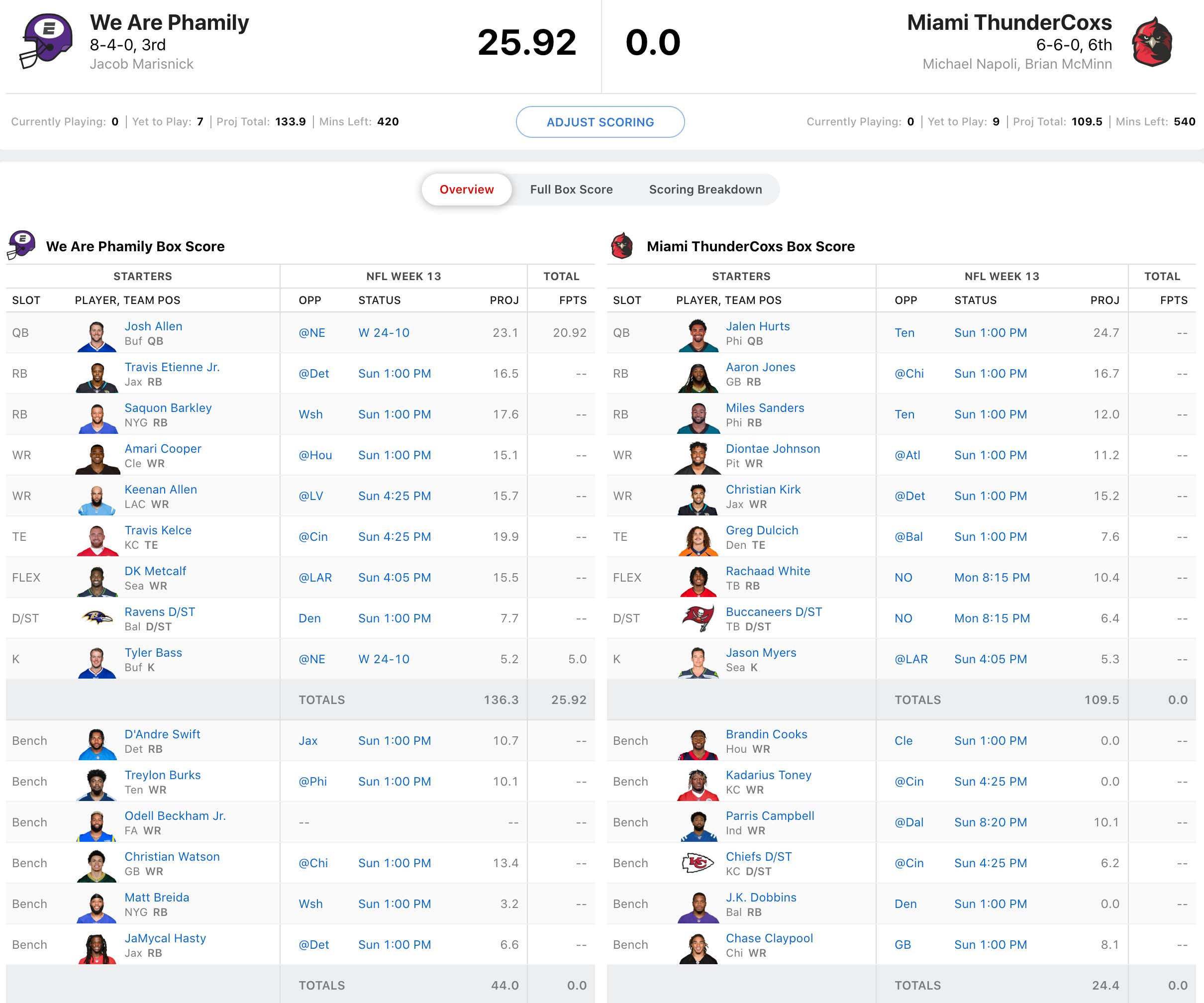 Napoli has had a nice couple weeks now and he'll need his Eagles duo of Jalen Hurts and Miles Sanders to come up very big to have a shot in this one. Aaron Jones against the Bears has a chance to really pop, but Rachaad White is welcoming back Leonard Fournette this week against a team that plays the Bucs really tough, so his upside may be capped. Meanwhile, for Marisnick, Josh Allen had a serviceable game and he welcomes back Travis Etienne who is playing today. He also gets a boost with Deshaun Watson throwing the ball to Amari Cooper and Travis Kelce is in a potential shootout. This roster is so stacked, I like it to move into the bye range with a win.

If Napoli stumbles, Eric Hosmer is only behind about 10.5 points for the #6 seed. He's got a tough matchup this week in the Guardians duo of Shane Bieber/Austin Hedges. 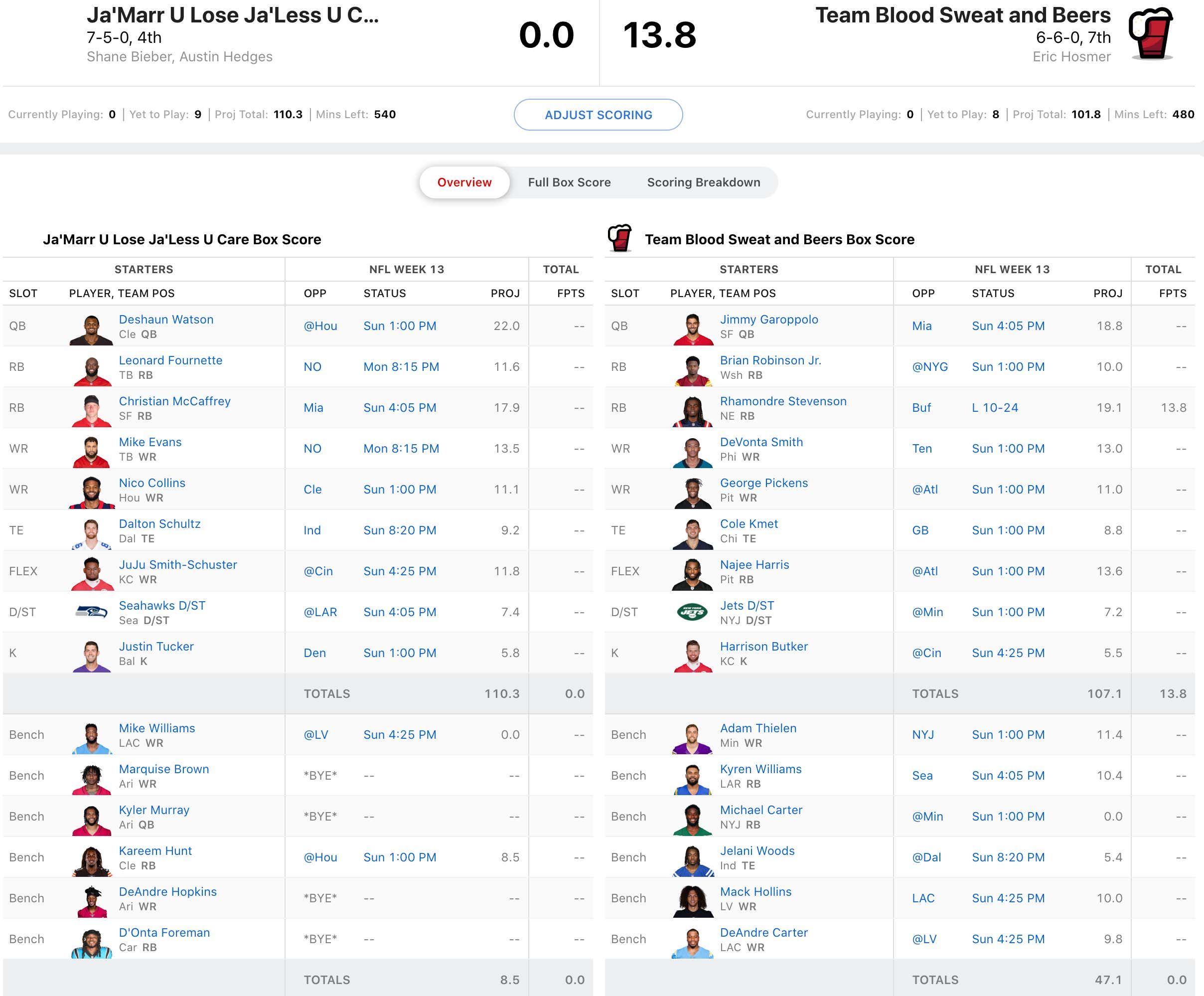 This is a very interesting matchup because Bieber and Hedges are relying on their fellow Clevelander, Deshaun Watson to help put them into the playoffs, which they'll clinch with a win. With Elijah Mitchell going down in San Francisco, expect Christian McCaffrey to take on a bigger workload. JuJu Smith-Schuster has a tasty matchup and they made a savvy move picking up the Seahawks D/ST that will get a depleted Rams squad today. Meanwhile, the mid-week trade just before the deadline to land Rhamondre Stevenson and Najee Harris hasn't exactly worked out yet with Stevenson falling 5.3 points short of his projection. Jimmy G will need to have a big game and that's not what you want to hear going into a fantasy Sunday. I'll take Bieber & Hedges today.

A huge matchup between two 6-6 teams fighting for the playoffs with the Brewers duo of Christian Yelich/Jace Peterson and Dave Portnoy. 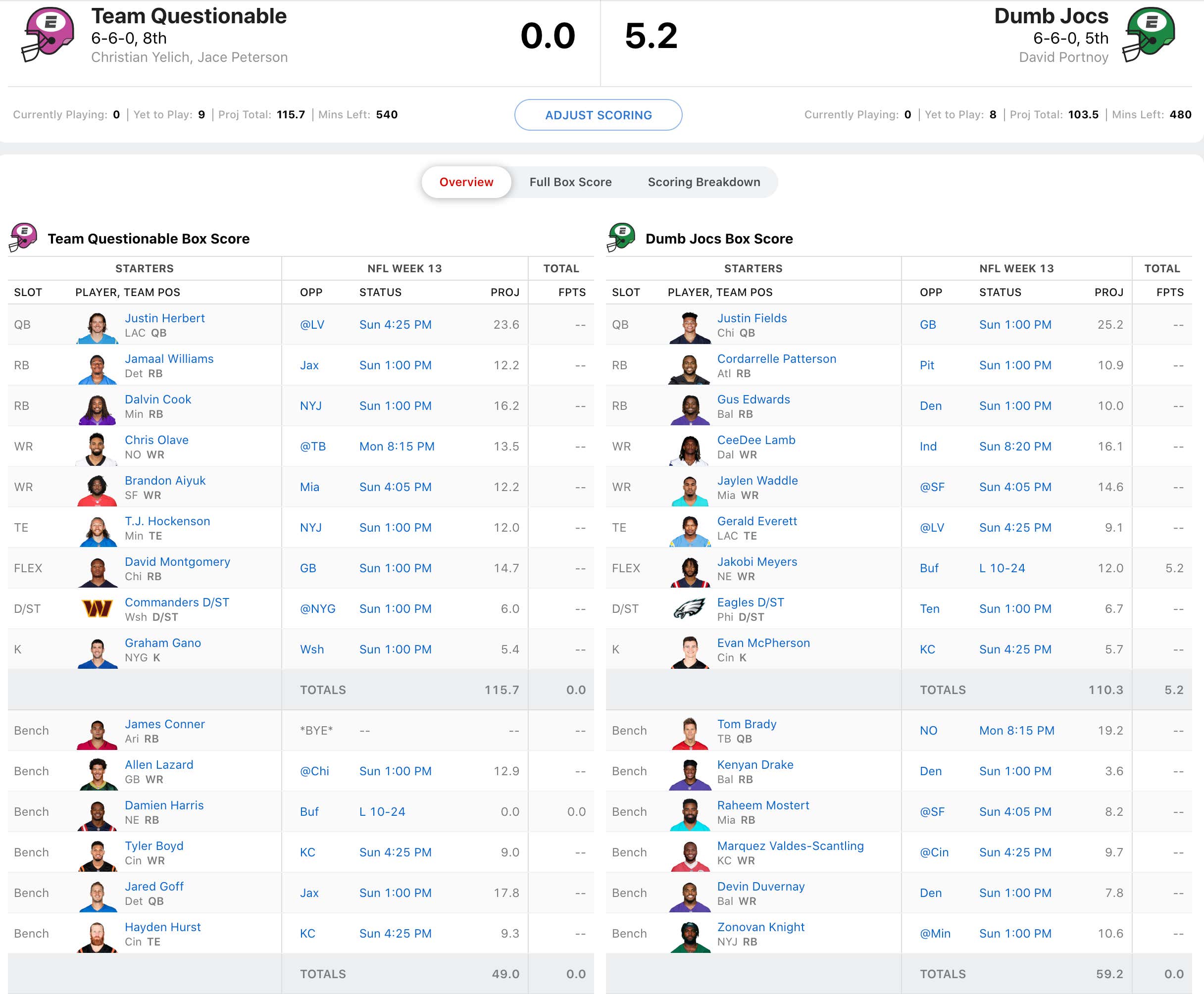 Dave will also need his backfield to have a day. He's starting Cordarrelle Patterson and Gus Edwards. He's in a tough predicament here because he's got Zonovan Knight who should get a majority of the Jets carries on the bench and also leaving Raheem Mostert on the bench in a revenge game. These are the tough calls that decide a season, so let's see if it works out for Dave today. I think this will be a very close matchup as that could be decided by Chris Olave on Monday Night. Yelich & Jace will need big games from Jamaal Williams and TJ Hockenson today, but they both have favorable positional matchups. A lot of this matchup depends on exactly how healthy Justin Fields is. If Justino is cooking, I think it's lights out for Yelich & Jace.

Two teams on the outside looking in, from the nosebleeds are Manny Machado and the trio of Joc Pederson/Alex Wood/Austin Barnes. Even with a win, it's possible the winner of this matchup could be eliminated from the playoffs if things break wrong. 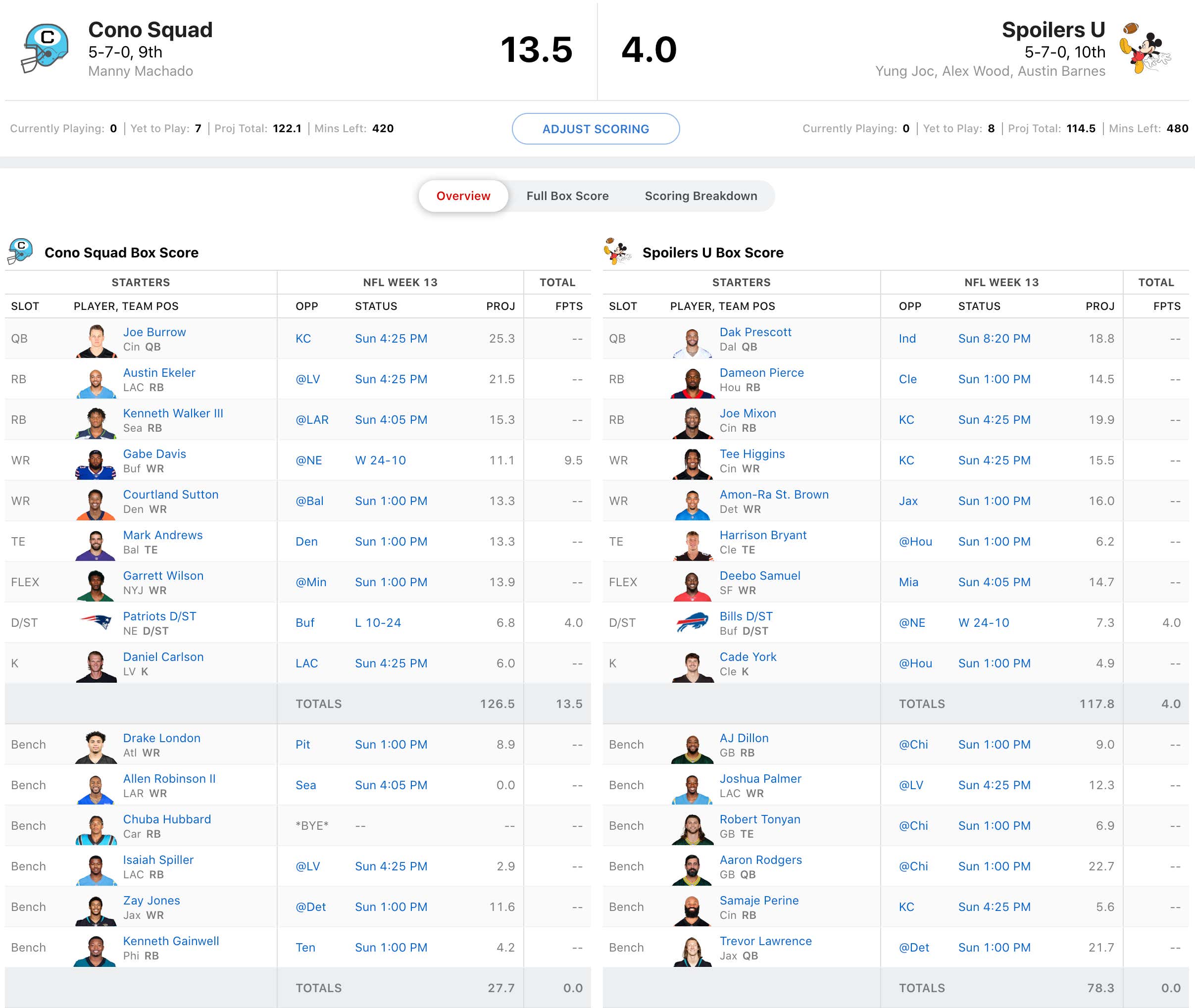 Joe Burrow is a top QB option this week, especially in a 6-point passing TD league going against the Chiefs in a game with a projected 53 point total. Kennether Walker has struggled, but looks to bounce back against a struggling Rams team. But Austin Ekeler has been a monster in PPR this year and should have a big game against a bad Raiders D. But Spoilers U has been hot and I like Dameon Pierce today in a big game for the Texans against their old QB. Deebo Samuel is beat up but will play, but I think this game comes down to Joe Mixon. If he plays, I like Spoilers U. If he doesn't, he's got Samaje Perine, but he doesn't present nearly the upside that Mixon, who has the league high points scored for a week with 55 in his 5 TD game vs. Carolina. So I'll roll with the upset here.

Mike Trout has a good looking team, but he's caught some really unfortunate breaks and been eliminated from the playoffs. Meanwhile Alex Bregman came points away from his second win of the season and is going all in to try and ruin anyone else's season he can. 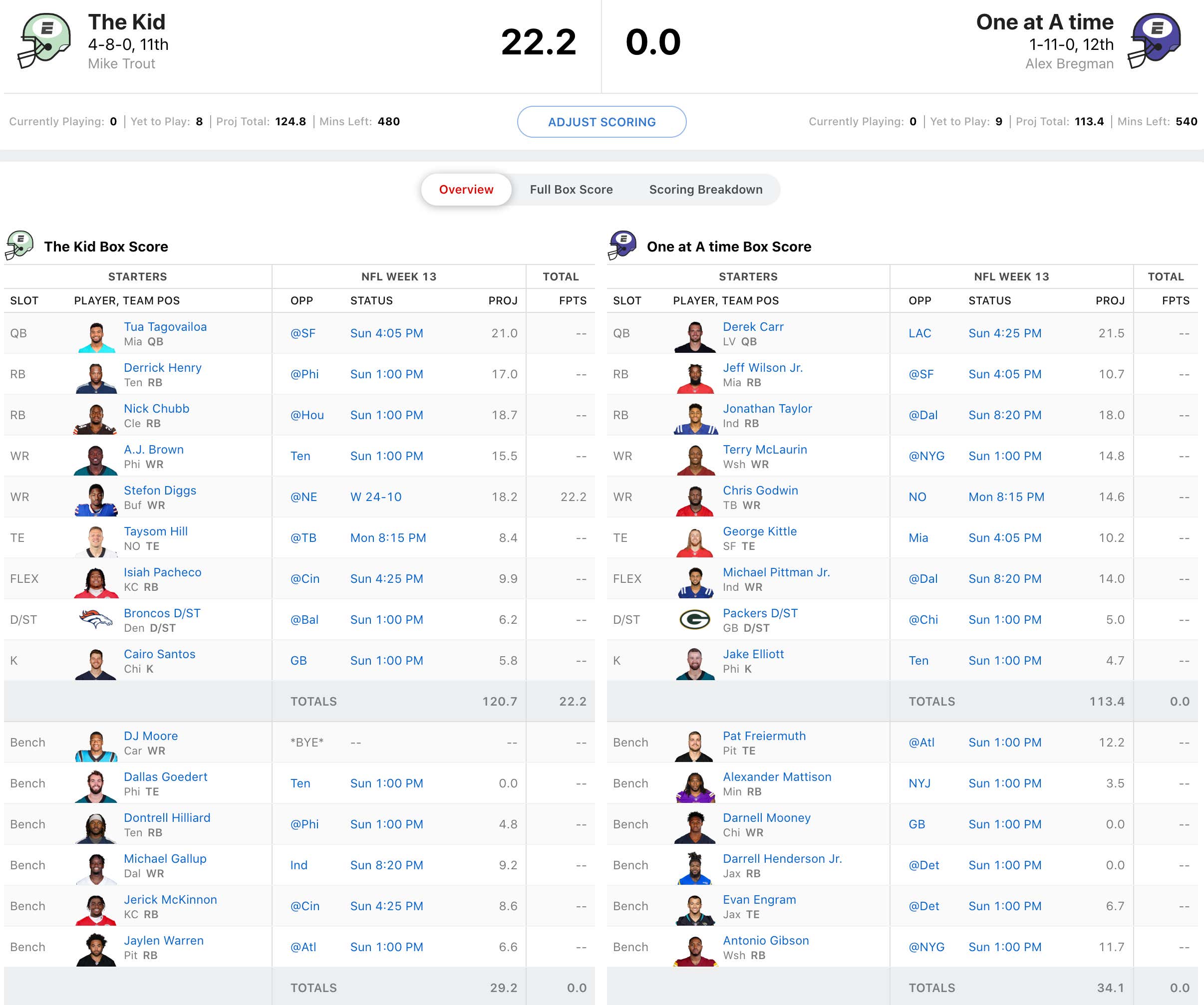 Bregman has been frisky the past few weeks despite having just one win on the year. He's got some ascending players in Terry McLaurin, Chris Godwin, George Kittle, and Jeff Wilson Jr. I also like the matchup for Derek Carr today and Jonathan Taylor looks to reesatablish himself with Jeff Saturday at HC. But Trout's team is just a wagon and the backfield of Derrick Henry and Nick Chubb is elite. AJ Brown gets himself a revenge game against his old team and Taysom Hill is a sneaky good play at TE with Juwan Johnson out. He's also been getting QB reps recently. Tua will look to avenge Mike McDaniel against his old team and Isiah Pacheco is the starter in that projected shootout vs. the Bengals, so I'll take Trout today.