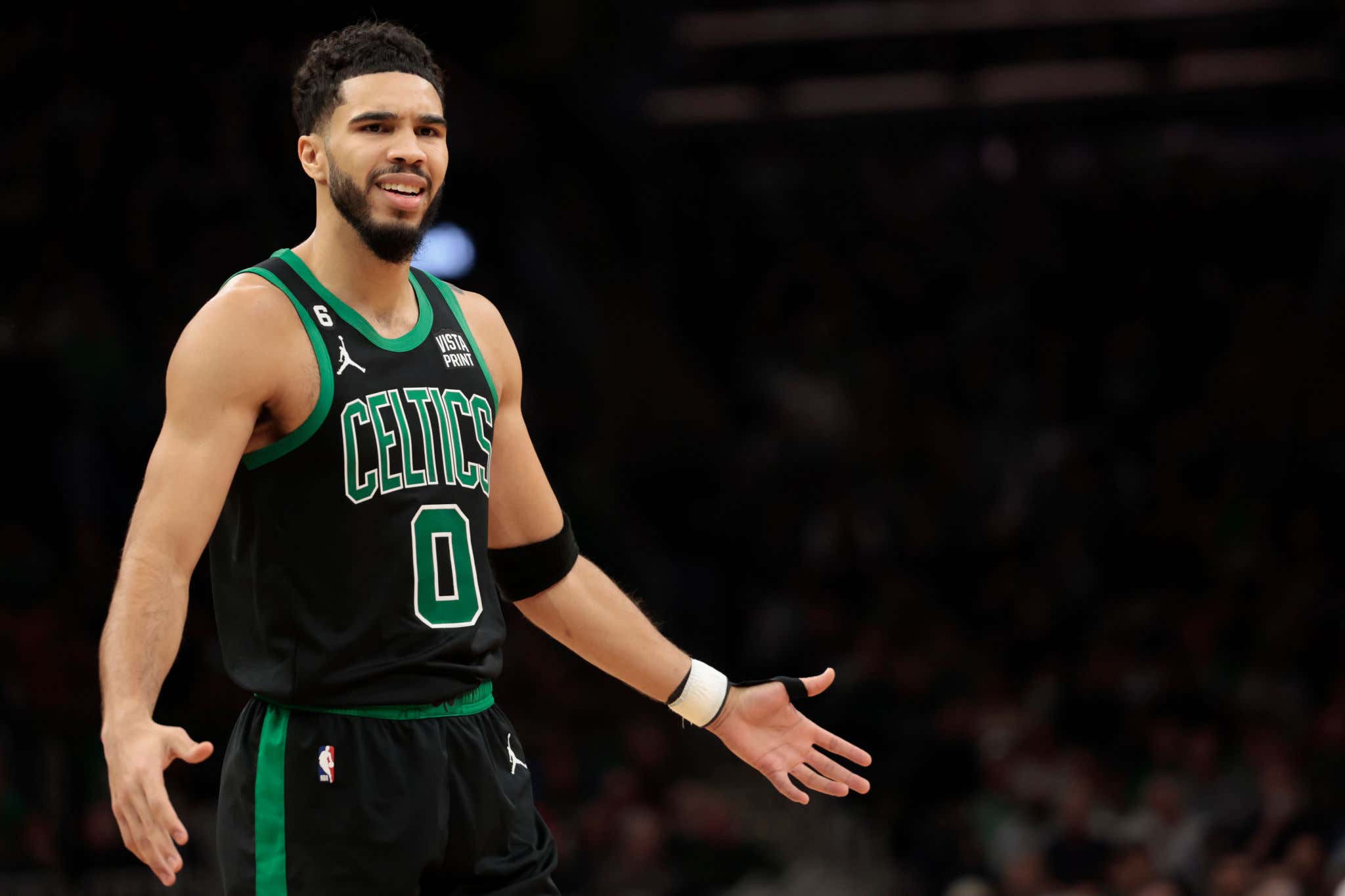 Well that shit was extremely annoying. I feel like that does a pretty decent job of summing up what went down last night at the Garden. Just some annoying ass basketball. If you close your eyes and try and come up with all of the exact things the Celts cannot and should not do if they want to beat a healthy Heat team, last night was another one of those games where they instead decided to actually do every one of those things. I find that extremely annoying.

Just like the Bulls loss that ended their 9 game streak, this loss to the Heat that ended the Celts 6 game streak was a nice little reminder of what happens when this team plays like assholes. It doesn't matter how historic their offense might be, when you play like assholes nothing else really matters. Considering we just saw what you had to do in order to beat the Heat literally a few days ago, I found their performance last night to be very annoying. I keep going back to that work because I still find myself to be pretty annoyed.

The good news is teams like the Bucks also lost last night (to LAL), so the Celts woke up this morning still owning the best record in the NBA and still owning a 2 game lead over MIL for the top spot in the East. The bad news is a kind of wanted that undefeated homestand. I suppose 5-1 isn't too shabby, and who knows maybe this was a nice little reminder for them as they begin what is going to be a very challenging 6 game road trip. If they play like they did last night, things are going to get ugly.

So to pull a move from Joe's playbook, fuck this sandcastle. Time to build a new one. But first, we need to talk about what happened.

- A few days ago I got a little flack for saying the Celts don't have a 1A and a 1B that instead they are someone who employ two different 1As. That is how good Jaylen Brown is. Whether it's the regular season, the playoffs, Jaylen delivers. Take last night for example, he was easily the best player on the floor

and that's not even including his prayer heave. What an insane shot that was, but we should be used to it. Remember when Jaylen hit this against the Knicks last year?

So maybe it wasn't a prayer after all. Sure they also lost that Knicks game in 2OT but let try and focus on the positives here. Jaylen is playing at an All NBA level right now and that is a very big deal. An efficient 37/14/5 last night, we even saw Jaylen nail his FTs late in a huge spot which is always nice to see.

The annoying part is usually a performance like this translates into a win. The issue for Jaylen (and the whole team really) was that his 5 TOs were pretty tough to overcome even with how well he was playing. But on a night where the Celts needed their stars to step up, I think we can all agree that Jaylen rose to the occasion like he so often does.

- The same is true for Smart. Honestly Smart and Jaylen were the ones carrying this offense for a long stretch. With Smart, he was basically the only offense for this team early and he finished with 18/9 on 8-14 shooting.

Smart has now topped at least 9 assists in 3 straight games and 4 times in his last 6 games. The way he is passing the ball right now is the best we've maybe ever seen from him. Defensively, it was more of the same as well

all while operating in foul trouble for most of the night. I thought this was another night where we saw take exactly what the game was giving him rather than forcing things just because someone like Tatum may have been having an off night. He took 6 shots in the first quarter when they needed offense (4-6), and then took 8 FGA the rest of the way (4-8). If he continues to play with this approach, the Celts are going to continue to win at a high level.

Sadly just like with Jaylen, Smart too had a TO problem. You're going to see a recurring theme here.

- Over the last few games we'd seen Grant slide into a little mini slump, so it was nice to see him finally snap out of it last night. Grant was easily the best player off the bench in this game and nearly sealed the deal himself late in the fourth quarter

This version of Grant is going to cost Brad a lotttttt of money and I don't think he'll have any problem paying it. Grant bet on himself entering this season and it's hard to argue against that decision. He has career highs in points, rebounds, assists, FG%, 3PM, and 3P%. He is having a quintessential career year and it hasn't mattered if he spot starts or comes off the bench. They are going to need this version or pretty close to this version of Grant for his 6 game trip, so hopefully seeing the ball drop like this gets him going.

His ability to not just knock down catch & shoot threes, but now also having the ability to fake, reset/relocate and then also still make threes is such a weapon and helps show what type of progress he's making as a scorer. He's way more comfortable attacking closeouts which is huge, but for a guy who literally couldn't shoot his rookie year to now making huge step back threes in the final minute of a game is a pretty crazy ride.

- It took 23 games, but we finally got one of those brutal Tatum stinkers. Easily his worst performance of the season (5-18, 0-7) which was only made worse by his 5 TOs. I'm just going to go out on a limb and say the Celts are going to have issues if Tatum finishes games with the same amount of TOs as FGM. That's not what we're looking for. Even with the early foul trouble, I expect Tatum to figure it out and it never really happened.

Instead, it was the same annoying shit you usually get in these clinkers. Tatum couldn't make a layup, couldn't make a three, wasnt really getting to the line, and couldn't control the basketball. That shit happens. In the fourth, Tatum was just 2-5 from the floor and then a brutal 1-4 in OT. With the game there for the taking, a 3-9 showing from Tatum was rough to watch, especially because we literally just watched him drop 49 on this exact team. You know it's just one of those nights when even shit like this won't drop

Just one of those nights I guess

- Similar to the Bulls game, the Celts had some issues from behind the arc. Unless your name was Jaylen Brown (5-11) or Grant Williams (4-6), you didn't make shit from deep. The starters were 4-23 outside of Jaylen, and as a team the Celts finished 15-45 (33%). Most were good looks, especially that one from Al late in the corner, they just weren't falling. A make or miss league as they say. The Celts were still able to generate good looks which tells you their offense was moving the ball (26 AST), the issue came more on the execution side. Good approach, poor execution.

- Tough night for Brogdon off the bench going just 2-7 from the floor and a team worst -20 in his 21 minutes. He's been so great since returning from injury I'm looking right past this stinker, but it was a stinker. There was no offensive spark off the bench, he didn't really move the ball (0 AST) and he too had turnover issues.

- Considering how this team was shooting the ball and how much they struggled with ball control, I was suprised to see Payton Pritchard was a DNP-CD. Especially against a team that plays a shit ton of zone. Not only that, but this game was begging for his chaos. The Celts needed that classic Payton momentum shift, and we never even got a chance to see if he could do it. It's not like Brogdon/White were crushing it either, so to see a DNP was unfortunate.

- As poor as the Celts may have played, they were up by 13 at one point in the second half. They entered the 4th quarter with a 6 point lead that got as high as 8. This was a very winnable game despite being one of their worst showings of the season, so that's awesome. And yet, just like they so often do against the Heat, every time the Celts got seperation, they immediately got careless and allowed the Heat to creep back in.

- You bet your ass missing 7 FTs bothers the shit out of me. This is the best FT shooting team in the NBA, and you're giving away 7 points at the line. Tatum missing that FT in the 4th was brutal. Smart missing 3 FTAs almost doesn't seem possible. You just cannot do that shit against a good team. That's even more true when you're best player also can't score.

- We saw the Celts really only play one quarter of good defense and it came in the 3rd quarter (22 points). Other than that the Heat had at least 27 in the other three. All while only shooting 11-35 from deep. That's…..not great. Horford once again had issues with Bam. Derrick/Grant struggled against Jimmy, and nobody figured out how to guard a Bam/Herro P&R. Again this is a little confusing because they just saw it on Wednesday.

- Thre Tatum stinker was brutal, the three point shooting was rough, the whistles were inconsistent for everyone, but you know why the Celts lost this game?

Because they refuse to take care of the fucking ball against the Heat. Period. Full stop.

For the most part it's pretty simple. If you turn it over against the Heat, you die. You need to make their offense actually beat you. The worst part about these high TO numbers is almost all of them are live ball turnovers. Simply throwing the ball to the other team, or not paying attention and having it poked loose. The Celts gave up 21 points off TOs in this game, do we think that maybe had an impact on the result?

Tatum/Brown/Smart combined for 14 of the 20. Your two best players had 10. That's an issue considering those are the guys who have the ball the most. Lazy passes, driving into traffic, poor ball security on drives, it was what killed this team all night. They were on pace for 28 turnovers in the first half!

To make matters worse, there was also 2nd chance points issue. The Heat had 22 of those. What do we always say, for the Celts to reach their potential they need to rebound and take care of the basketball. They did neither in this game and look what happened. That's annoying because they are self inflicted and something you control. Just be smart with the ball and box the fuck out. Why they can do that against every team in the league but MIA will never make sense to me.

- In a game that needed the best player from each team to make a play to win the game, Jimmy Butler did it twice and Jayson Tatum was nowhere to be found. You may not like that sentence, but it's the truth. Back to back daggers by Jimmy in the final moments were what we all hoped Tatum would do. It was a fitting end to a dogshit performance.

We now see this team embark on a massive 6 game road trip. First in BKN/TOR then out West. The good news is we've seen this team immediately respond after every loss they've had, so I expect more of the same this time around. The competition will be better, but I imagine so will the Celts.