What a word salad of a headline, but nevertheless here we are:

Alright... so we've got an obvious nod to the Mean Girls Jingle Bell Rock scene, but... "naughty dirty sodas" and "pilk"? What's the ad angle here? I don't get it... 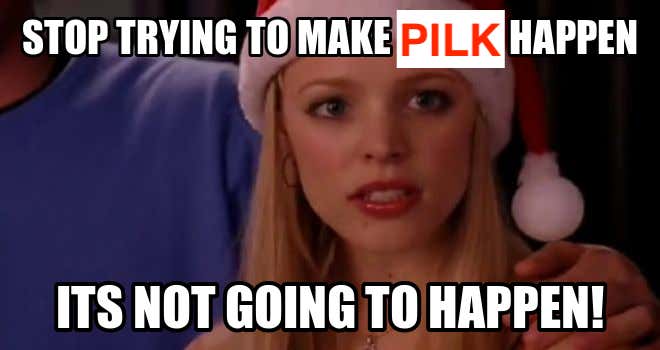 Turns out 'dirty sodas' like 'Pilk' are indeed happening at a growing rate and this whole ad was probably a nod to that. Vulture explains:

It’s a riff on Utah’s dirty sodas, regionally popular soft drinks that blend soda with half-and-half or creamer and additional flavored syrups. For some reason, coffee is a sin there, but bubbly dairy syrup is a godly bevvy. This genre of drink’s connection to piety isn’t new, nor is it even Utah specific. The original cream soda had real dairy in it and was marketed as a temperance drink on the East Coast in the late 19th century. But TikTok has made Utah’s popular dirty-soda spots, like Swig, go viral, the drinks’ neon-hued visual appeal undeniable. And Falling for Christmas was filmed in Utah, even though it takes place in Aspen, so there’s some sort of trackable brand synergy going on with her affiliation with the trend.

Anyone on the west coast is probably like, "No shit, Kate", but I wasn't aware of this trend SO LAY OFF ME while I explain the phenomenon pls. Dirty soda joints like Swig are exploding & I don't think it will be long until they make their way across the country. That particular chain has nearly 46 locations & make about 11M customized soda drinks a year to the tune of tens of millions. The menus feature small snacks like pretzel nuggets & cookies, and specialized drinks. Ex: A 'Dirty Dr. Pepper' is coconut syrup in a Dr. Pepper, a 'Polar Punch' mixes ginger ale with raspberry, blackberry, strawberry, and vanilla cream… Not gonna lie, it sounds pretty good and hungover me would probably love an ice cold root bear with vanilla cream & a Motrin mashed into it. 10/10, will give it a whirl.

As for milk dumped in Pepsi, no chance. I'm glad to see Lohan making a comeback, but that's one thing I can't support this holiday SZN.