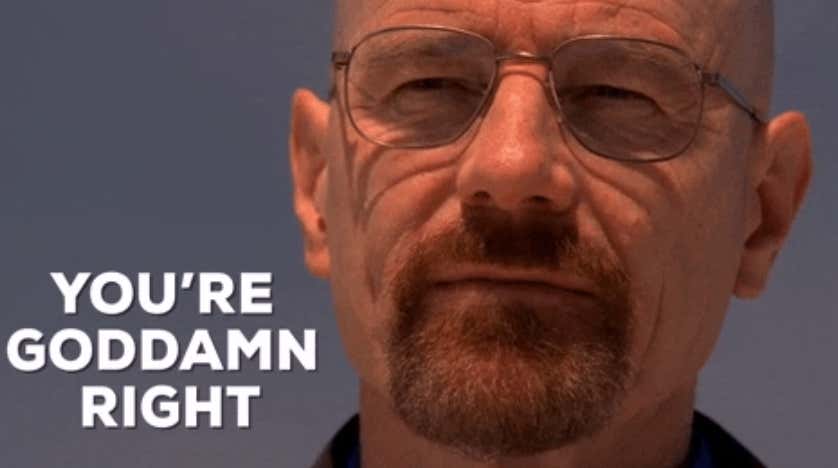 Turn me into the psychopath police, put me in psychopath jail, and throw away the psychopath key. I know it's not normal but I don't know what else to say- last night I finished what I would estimate is my 20th (give or take) time watching Breaking Bad. Is this crazy? Probably. Do I care? Not in the least.

You see, scientists have come up with a term for shows that we watch over and over and over (and over and over and over…) again- "comfort shows". But normally said "comfort shows" are delightful sitcoms, romcoms, or programs that feature a group of friends (such as the show Friends) where you feel one of the gang. I have those shows as well- The Office which I've watched god knows how man times, Parks and Rec, New Girl, and How I Met Your Mother. (Side note about HIMYM- it fucking rules. Sure Lilly stinks and Ted can be an emo bitch, but it's a great show to fall asleep to.)

So while I watch those easy shows over and over again, whenever I'm done and I tell myself "Ok Eric, time to watch one of the zillion shows you haven't started yet. Just buckle down and do it". And then I scroll….and scroll….and scroll some more…and I always wind up with my friends Jesse and Walt.

The crazy thing about watching a show that many times is I still forget A LOT of things that happen. When Walt finds himself in a sticky situation I'm like "oh shit..wait…how does he get out of this one again?" and then it happens and I pump my fist like it's the first (or fifth) time I've seen it. The show never gets old. If you give it a rewatch once or twice a year you'll never bore of it. In fact, the opposite happens- I start recognizing more things, realizing more foreshadowing, researching more plot points. I'll read 10 different Reddit threads about one single scene from one episode. It's amazing. I love this show so much.

I recognize I have a problem, but I have zero qualms about it. We like what we like, and I just so happen to like watching a middle aged man with cancer cook meth and build an empire. It comforts me.

And yes, I could talk FOREVER about the ins and outs of the show- Is Skyler a bitch or is she a mother of two who doesn't want her meth-empire, murderer husband around? Did Walt have his family's best intentions in mind (at least at the beginning) or was he selfish the entire time? And Jesse. Fucking Jesse. He has become an internet darling (ohhhhh, he changed so much, blah blah blah…) since the show ended. FUCKKKKK THATTTTT NOISEEEEEEEEE. I hate Jesse. He for some reason gets a pass because the Nazis made him their meth slave. Give me a break. I wrote about that here:

Jesse is a rat. He went to the DEA because Brock was sick for 2 days. Cry me a fucking river, Jesse. You killed Gale, no problem, But Brock was sick for 2 days so you go to the DEA? Makes me puke. Gutless coward. Especially after Walt has saved his life, gotten him clean, and made him millions of dollars. Jesse isn't a good guy. Not saying anyone else in the show is a good guy (maybe Hank, but he's not without his flaws as well), but miss me with the Jesse ass kissing.

But I digress. The point is, love what you love. Be shameless about it. Whatever helps you fall asleep at night and helps you navigate this crazy world of ours, by all means. Sure, it might make you a little bit crazy, but whom amongst us is not?

Now if you excuse me…I think it's time I start Better Call Saul.