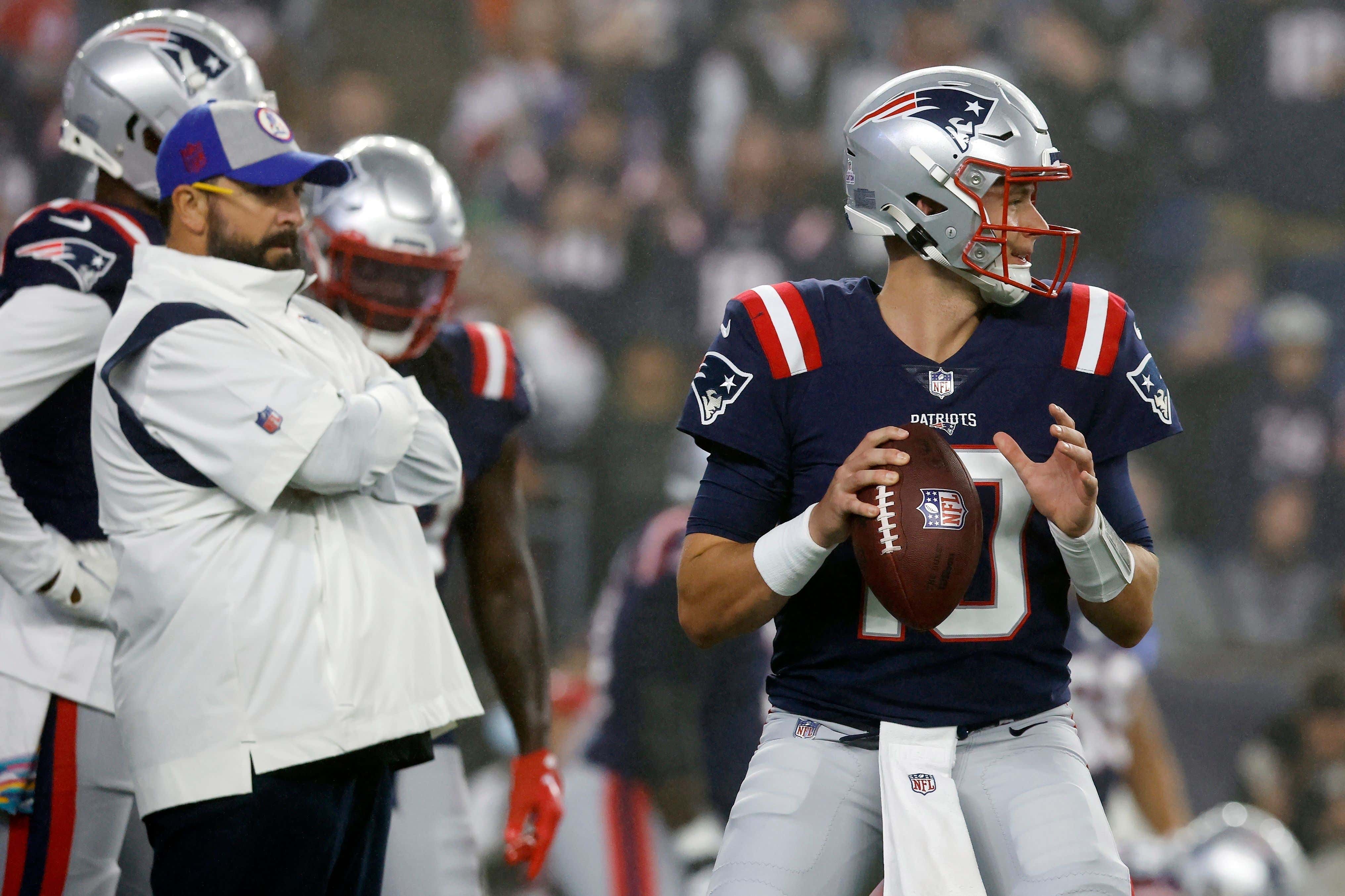 Mac Jones is facing one of those moments tonight that comes in every man's life where the burden falls on him and he has to deliver. Where he has to take that necessary step on the Hero's Journey Joseph Campbell spoke of. The one taken by every great hero from Odysseus to Beowulf, Frodo Baggins to Luke Skywalker, Roy Hobbs to Pete Davidson. Where the issue of whether the pressure will make make diamonds or make rubble is entirely up to him.

Working against Jones is the fact the Bills defense he's facing is 5th in the league in points allowed, 2nd in interceptions and 6th in passer rating against. Working in his favor is the fact that he's been in this situation before. A national TV game against an opponent that has him outmanned and outgunned. In fact, two of his best games last year came against Tom Brady and Dak Prescott. More importantly, he's coming off both of his best performances of this Bizarro World season, if not the best back-to-back games in his 28 career starts. He's completed 77.3% of his passes, good for 9.5 yards per attempt and averaged 314 yards per game the last two weeks. And hasn't thrown a pick since Week 8 at the Jets. So he's got that going for him. Which is nice.

But by no means has it been good enough. They were 3-10 on 3rd downs against the Vikings on Thanksgiving night. They went 0-for-the red zone, where they've converted only 14.3% of their chances over the last three games. And remain the 2nd worst red zone team in the league with a 38.7% conversion rate, ahead of only Denver.

Which begs the question we've all been asking ourselves since training camp, when this offense first started coughing up blood: What gives? Why has Jones only occasionally flashed the promise he showed as a rookie? Is it him regressing, or has it been the attempt change over the offensive system?

I've felt all along it was the latter, not the former. And Mike Reiss has a piece about how Kurt Warner and Matt Hasselbeck - who have 30 years of quarterbacking experience between them - concur:

Source - "It's hard to watch him this year because I don't think they’re helping him out very much," said Matt Hasselbeck, an 18-year NFL quarterback who now serves as an analyst on ESPN's Sunday NFL Countdown. "I thought he did a really great job last year -- the best quarterback in his class -- and he hasn't been nearly as good this year."

Pro Football Hall of Fame quarterback Kurt Warner, who works as an analyst for NFL Network, has been curious why that is the case. So he devoted his "Study Ball" film breakdown this week to the Patriots' offense, asking the question, "Is the offense setting Mac back?"

One of Warner's conclusions: "Things haven't happened quick enough for him. It has forced him to overthink things, to get through things too quickly and make a lot of bad decisions with the football that he didn't do nearly as much last year." …

"I know Mac Jones can play. We saw it all last year," Hasselbeck said. …

Warner sees simplicity in the Patriots' approach and wonders if it has negated one of Jones' best assets.

"One of the things I loved about Mac last year is that he's so good at processing information. Sometimes last year I thought he processed information too fast, meaning he got off certain reads too quickly because they hadn't developed," Warner told ESPN.com. "This year, I think they've kind of taken his superpower away because they've simplified everything. …

My thoughts exactly. Thanks to these guys for confirming what my vision-corrected eyes have been telling me. In case you have an hour to invest in watching Warner break down the work of one quarterback in one game, here's the video. I made it a good 12 minutes a couple of days ago before I moved onto other things. (Those Batman: The Animated Series episodes won't watch themselves. RIP, Kevin Conroy):

tl;dw: The bottom line is that Mac Jones didn't need things dumbed down. T-Rex doesn't want to be fed. He wants to hunt. Just because failures like N'Keal Harry and Devin Asiasi busted out didn't justify wholesale changes.

The problem isn't Jones; it's that Matt Patricia tried to simplify things, and in doing so oversimplified them to the point the scheme doesn't take advantage of what he does best. His strengths are making the proper reads based on looks the defense is giving him and his matchups, then getting the ball out quickly and accurately. Which is the same skill set that the Erhardt-Perkins offense has always emphasized. And gotten the most out of. The system was best for Jones, and he was best for it.

And I truly believe the last two weeks have been the result of a course correction. That they've gone back to what was working before, and Jones' numbers reflect it. There is still much to be cleaned up, particularly on 3rd down and in the red zone. As Warner said, the play calling needs to improve. (I vote we scrap that reverse to Kendrick Bourne on 2nd & 7 from the Minnesota 14 that lost 7 yards.) And overall the coaches need to play more to Jones' notable strengths, and trust him more. Let him play the system that won six Super Bowls here and a National Championship for him at Alabama. The passing game that open things up for him in the intermediate and deep areas of the field:

It's the best chance they have to solve the massive Bills conundrum that has haunted them for the last two years. If I'm Bill Belichick and Patricia doesn't do that, I'd have Bill O'Brien holding the playsheet next week.

Let's do this damned thing.