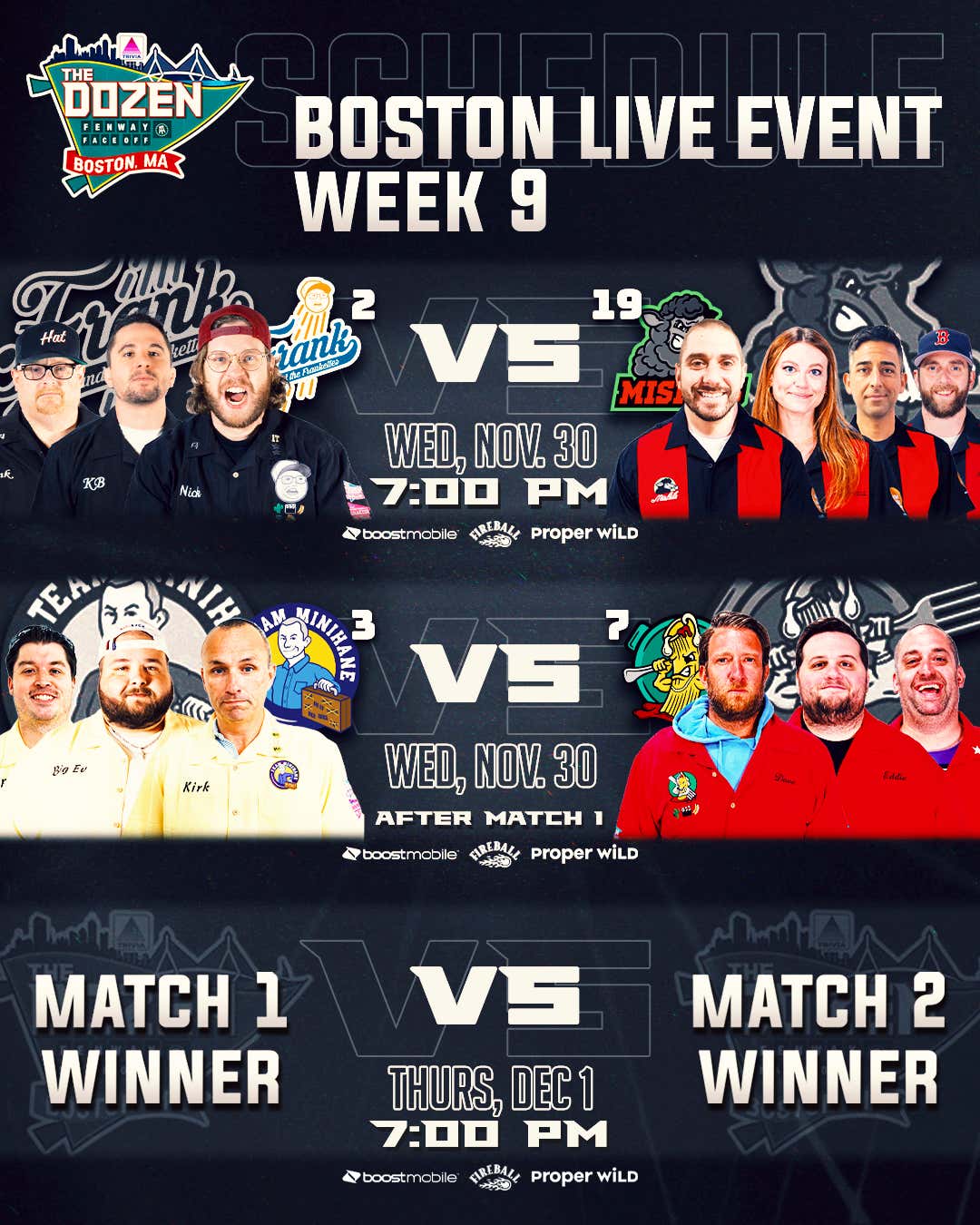 The Dozen Week 9 will be in front of a live crowd In Boston! This week, we got a match-up between Dave Portnoy and Kirk Minihane, The Misfits trying to upset Frank & The Frankettes, and a live-show champion will get crowned among the four teams.  Our correspondent Scoops L'Aguirre has the breakdown… 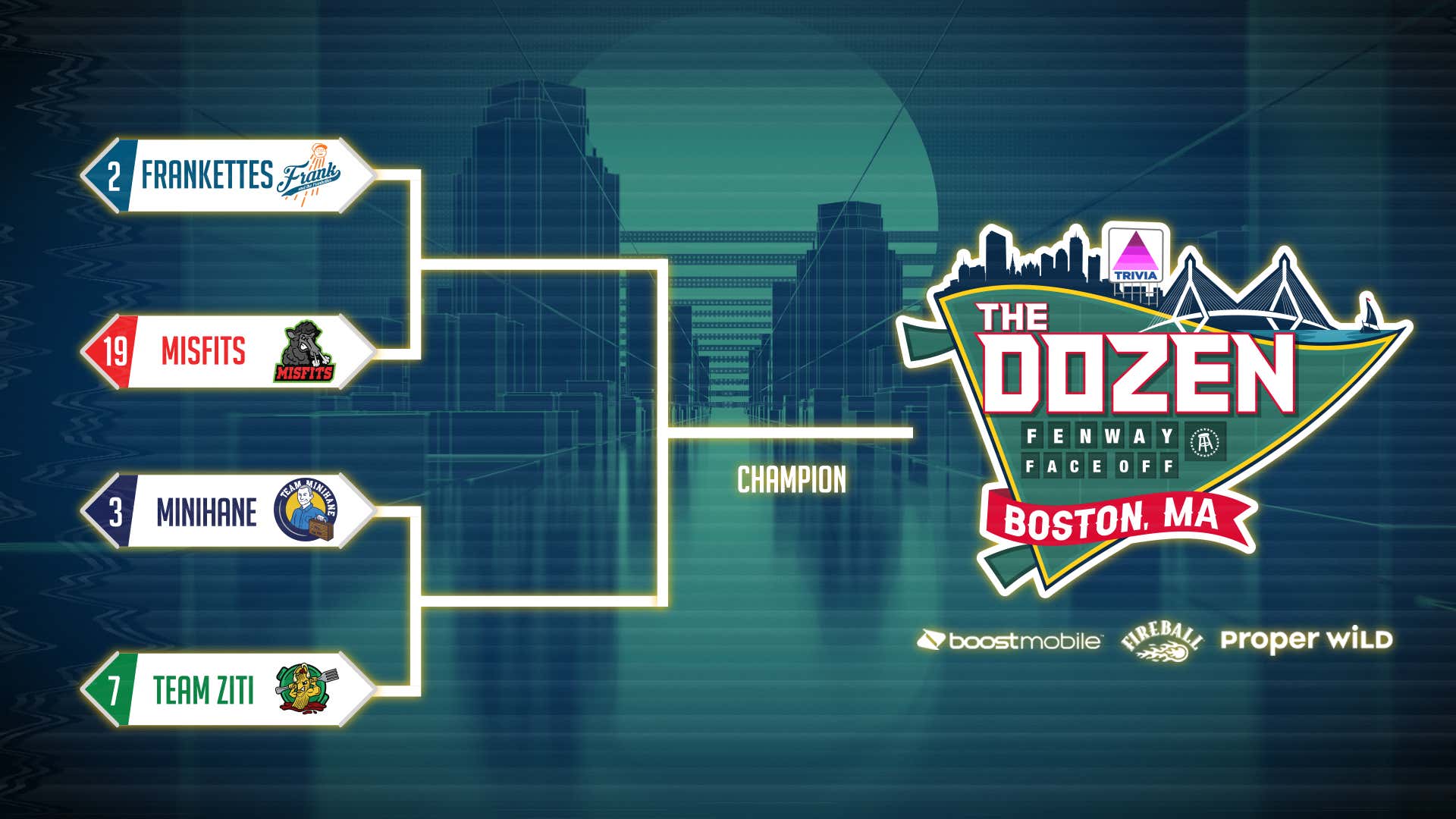 Now for the matchups… 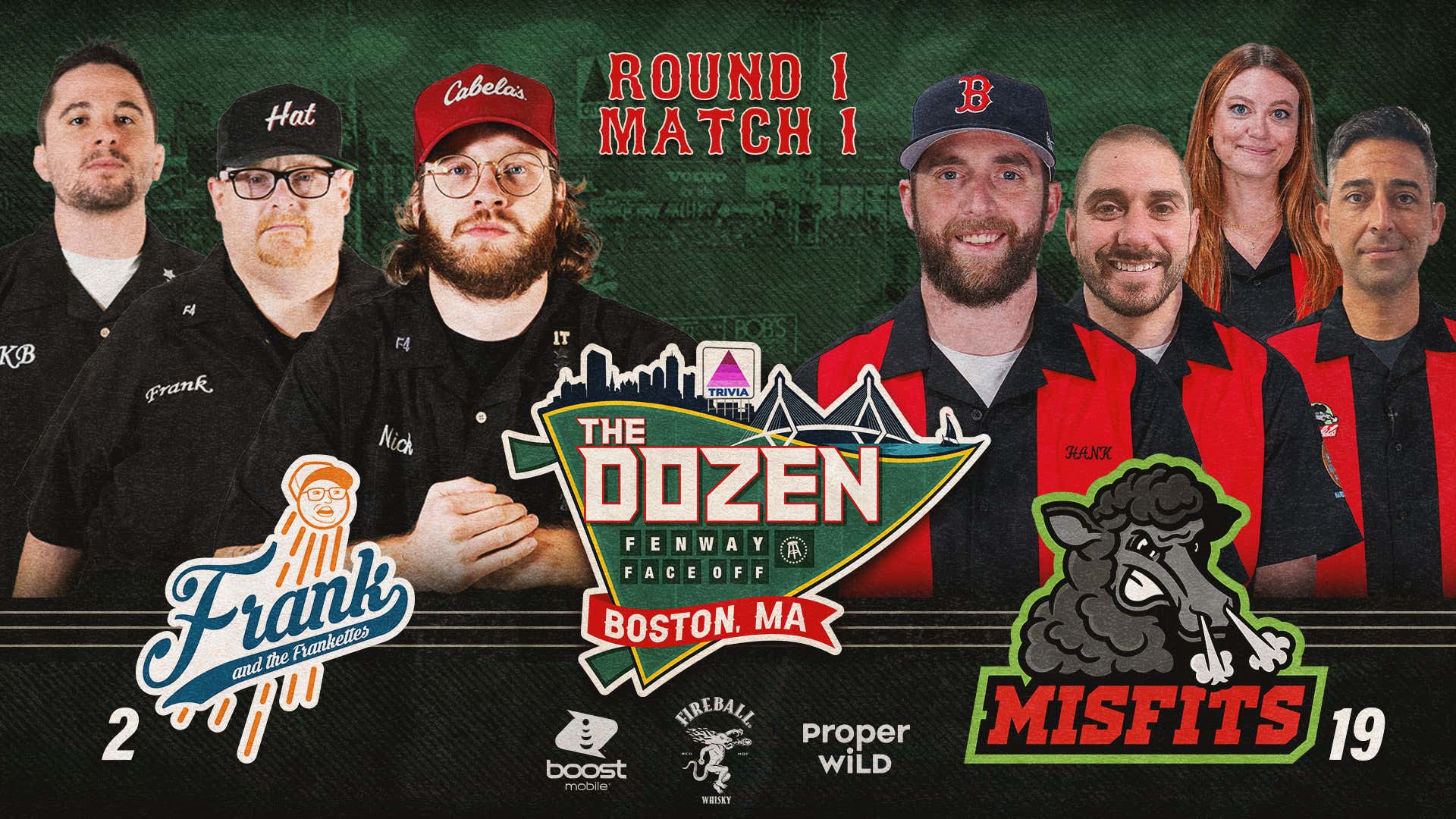 The Misfits and Frankettes face off for the first time; however, there is a bit of history between Nick Turani and Kelly Keegs. On Barstool vs. America, Nick got the best of Kelly, where he beat the puzzle/memory specialist every single time they went head-to-head in challenges. Nick is a perennial MVP candidate on statistically the best team in Dozen history; Keegs and the Misfits taking him down would be the ultimate redemption.

While The Misfits aren’t the same team who went to the Season 1 Championship, they aren’t a lay-up either. The new-look Misfits beat Gen XYZ and have gone wire-to-wire with contenders like Team Minihane, Smockin, and The Experts. Going into this game, The Misfits might be a match-up disaster for the Frankettes as Dante’s Music knowledge, RDT’s MLB specialty, and Keegs Celebrity Mashup ability can potentially neutralize The Frankettes in categories they typically dominate.

At the same time, fully expect Frank and the Frankettes to win because that’s what they do. 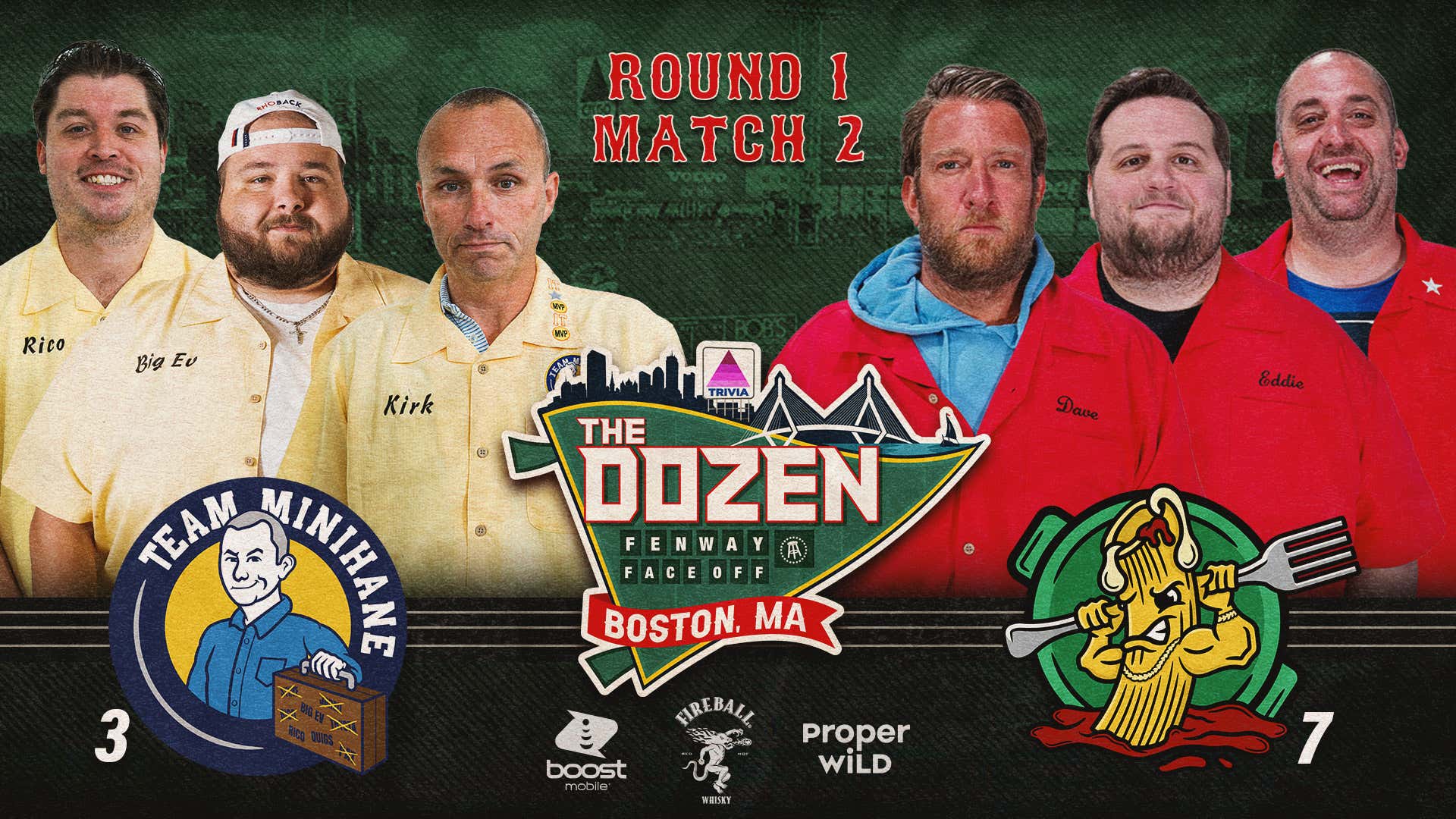 The last time Ziti and Team Minihane played, the game was a barn burner early in Season 2, in which Minihane swept the final round to win by one point.

There are two massive differences between now and then. That game was Dave’s first time as the final answer person, so he misappropriated Ziti’s Double, thinking he could use a Phone-A-Friend on the question. They had not settled into a Niche category yet either. Ziti has massively improved since then, and if they replayed that game against the same Team Minihane, they would win by 3-5 points.

Unfortunately for Ziti, they are not facing the same Team Minihane as Big Ev replacing Pat has turned an already elite team into an absolute juggernaut. After taking down Flux, Minihane put on a masterclass performance against The Icemen where they did not miss a single question in the second half. The current iteration of Team Minihane looks unstoppable until we see a reason to believe otherwise. 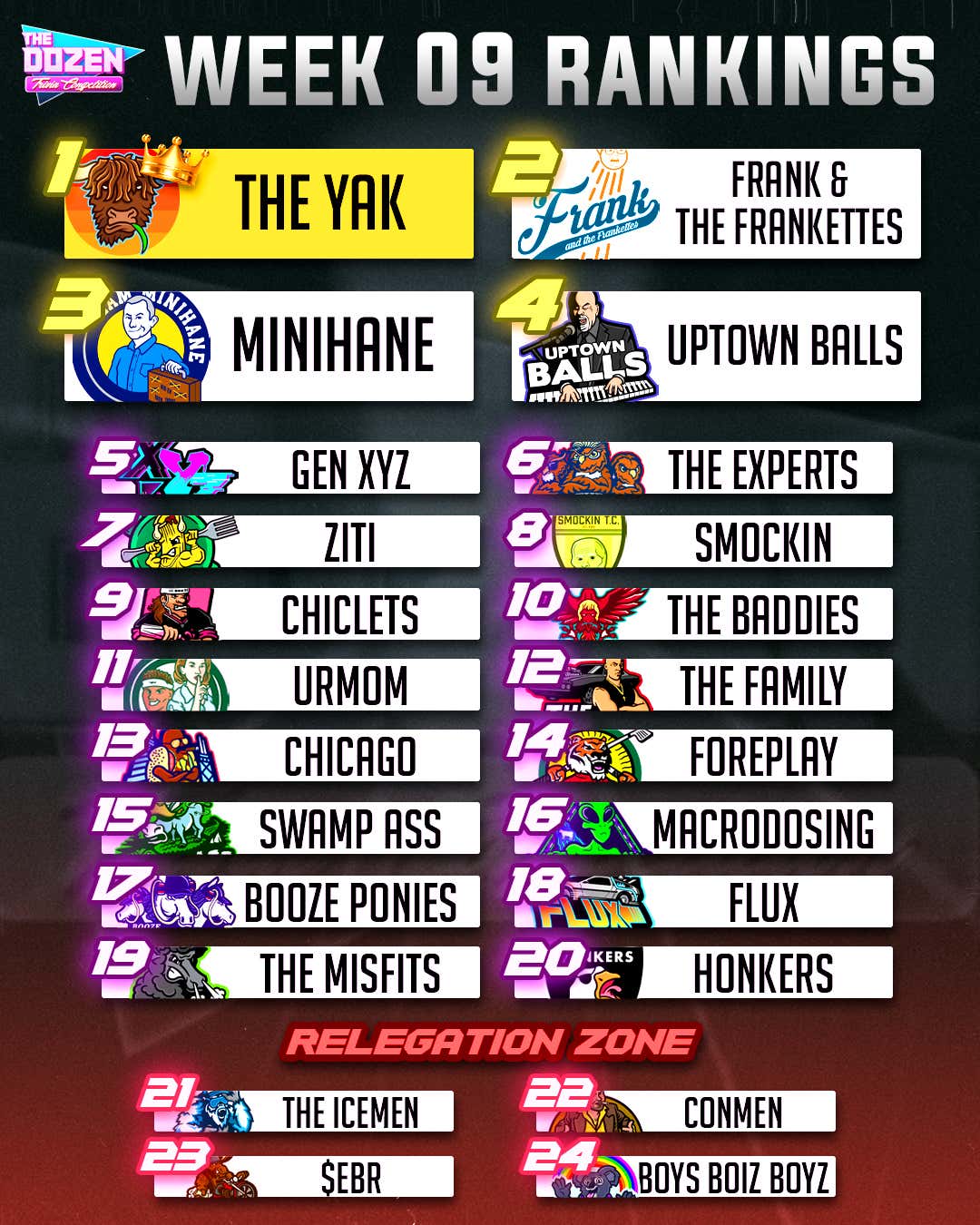 WEEK 9 PLAYERS OF THE WEEK 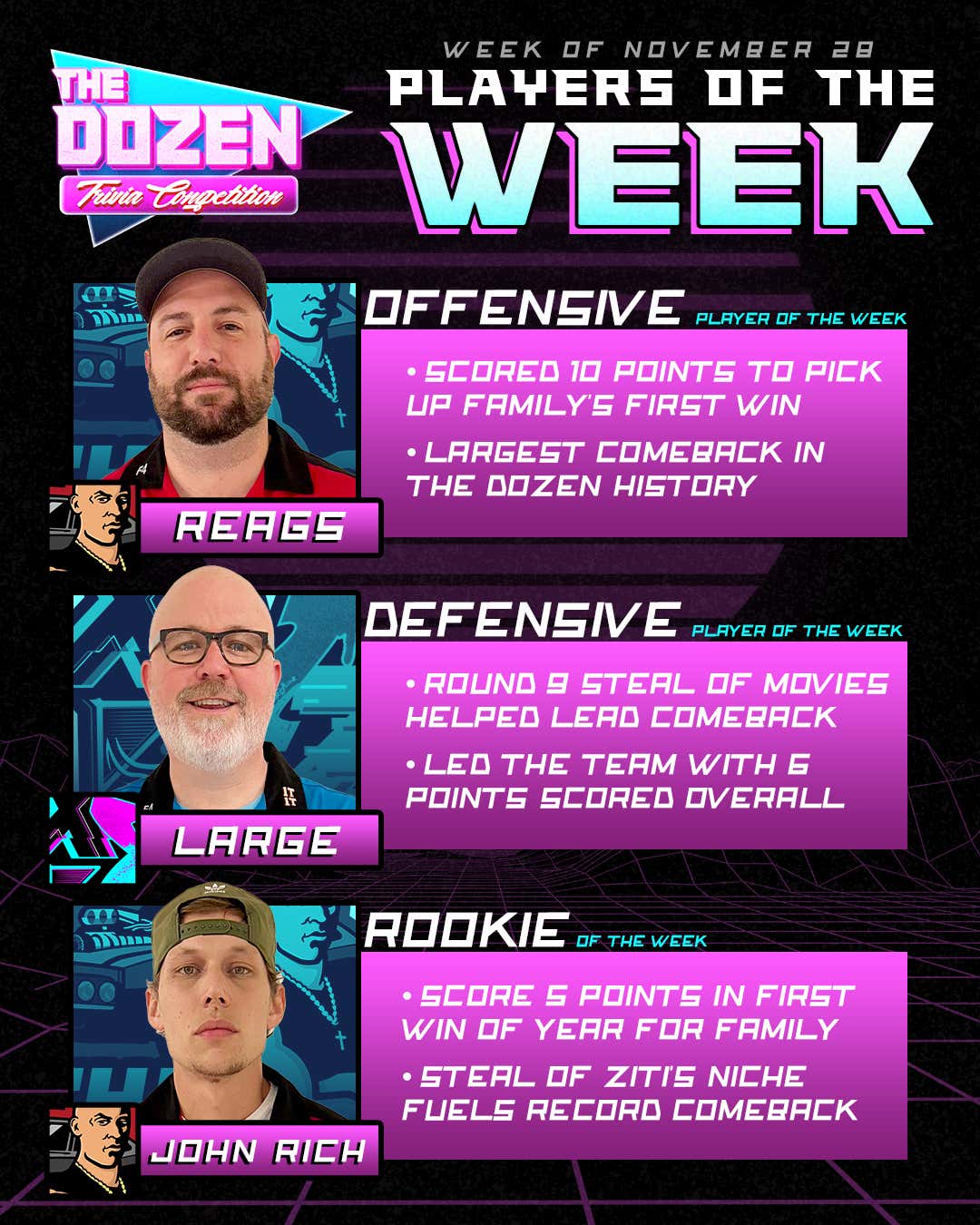