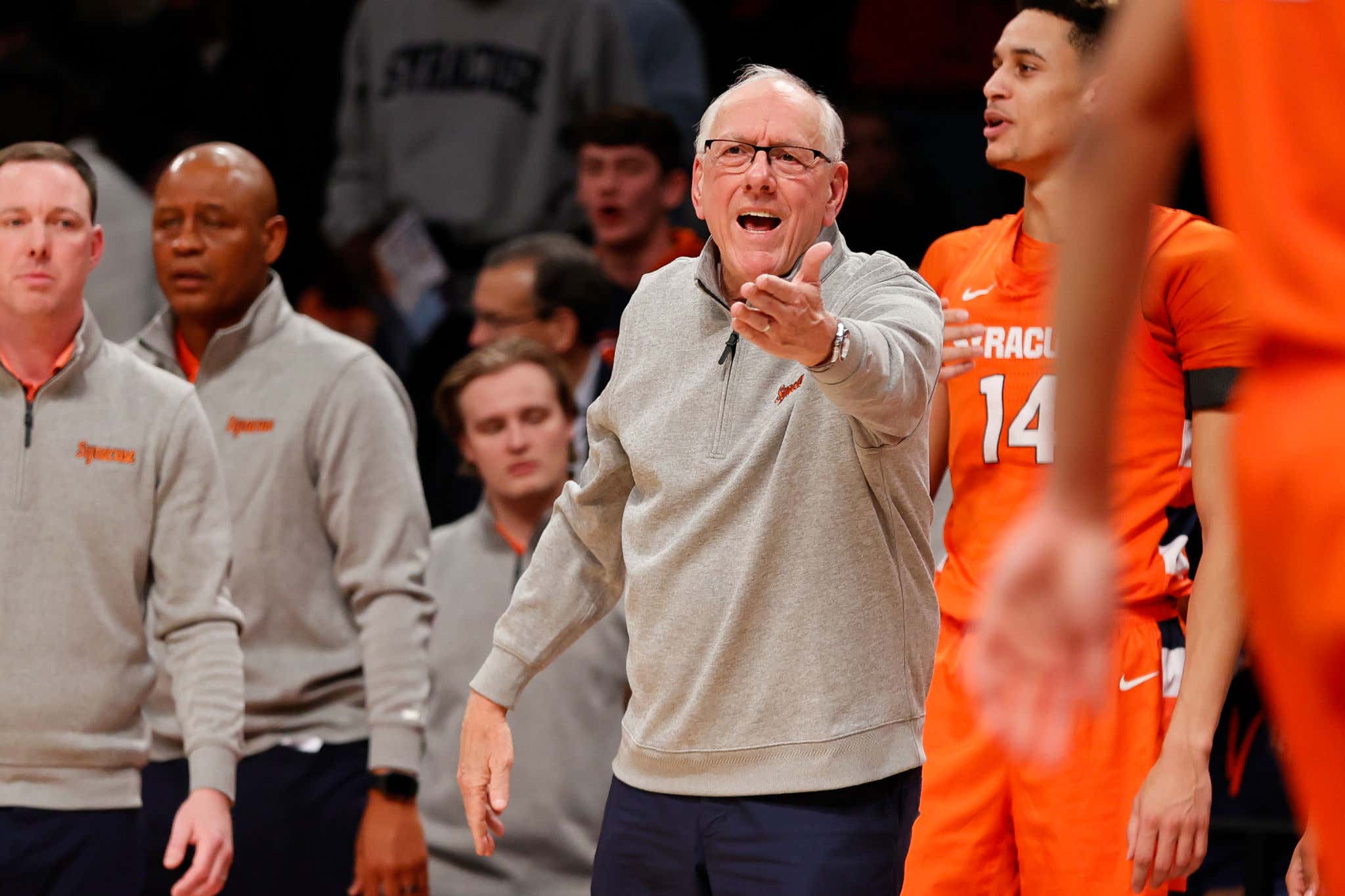 Jim Boeheim needs to go away. I've said it many times on the blog and I'm saying it again, please retire. He's a stubborn, oblivious asshole who has watched the game pass him by.

Here was Jim's quote about the Big 10 just before this season got going.

“You can say what you want about the Big Ten. They sucked in the tournament. To me, that’s what they did. All of their wins were in their league. If you can’t play in the NCAA tournament, then you’re not good.”

Does Jim Boeheim know Syracuse didn't make the tournament last year? What's he think about the teams who play so bad they can't even get into the dance? Does he realize his Syracuse Orange have been an annual laughing stock of late? Once a power house in the Big East, Boeheim has single handedly driven this program to the bottom of the ocean. His only calling card is that the gimmicky 2-3 zone confuses teams who have rarely seen it in the tournament. That's what he's hanging his hat on with that quote. Every now and then that results in Syracuse winning a few games in March. In-between those miracle runs you get average to mediocre play with a roster that has no chance.

I wish I could call this year's performance average or mediocre. Last night in the ACC-Big Ten challenge Illinois played a bad game by their standards. They missed a ton of open looks, shooting 28% on 39 three pointers. For the most part they played sloppy until the last 10 or so minutes. 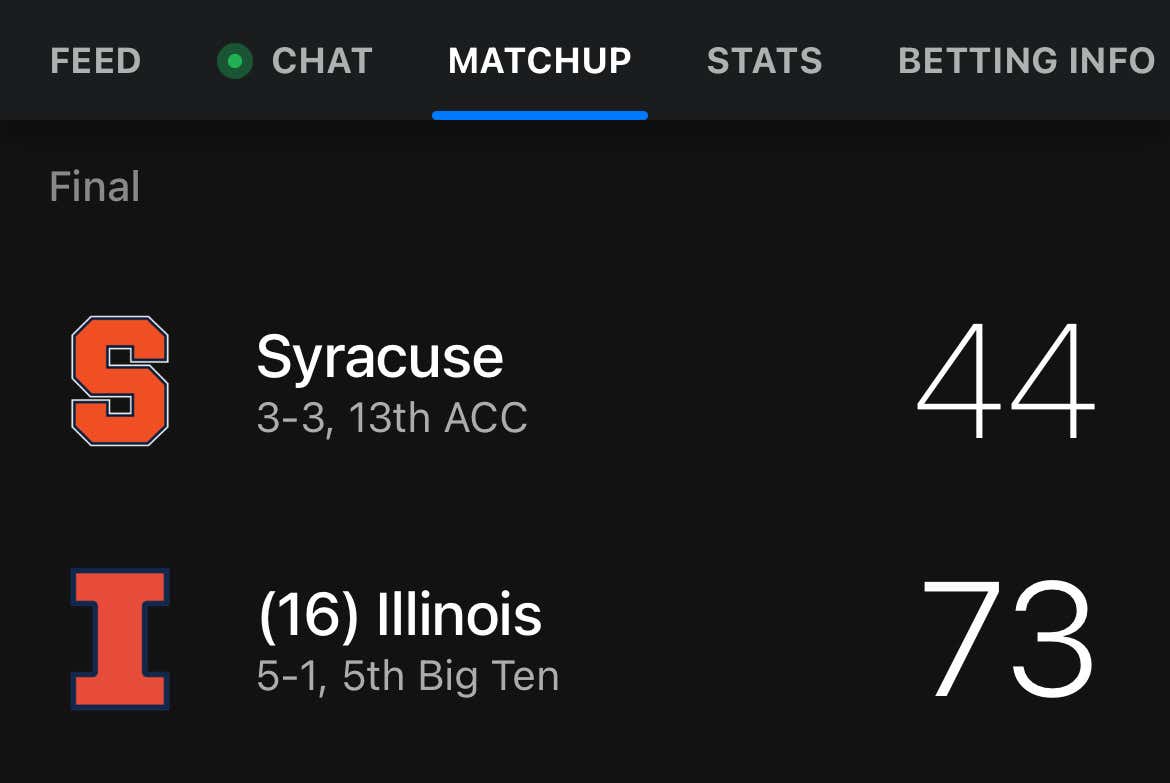 Maybe time to revisit that quote, above. Wish someone asked him about it.

Syracuse didn't register a single player in double figures while Illinois had five, including a triple double from Coleman Hawkins. Now I'm not here to compare Illinois' basketball program to Syracuse's. That'd be silly. Illinois has a real coach who knows what he's doing in Brad Underwood. They dominate recruiting, bring in good transfers regularly, and most importantly have a great coach who leads his guys.

How am I going to compare those programs when Syracuse can't even beat Colgate or Bryant in buy-games at home? The Orange currently stand at 3-4 on the season and are an absolute train-wreck. This isn't news to anyone who has watched the team over the years though. It's been apparent for YEARS that Boeheim needed to go. Yes, he built the program from nothing, put them on the map, and got them to the point where they were a top tier threat in college from 2009 to 2014. Since that stretch the highest they've been seeded in the tournament has been 8th. Heir apparent Mike Hopkins waited as long as he could to take over, only to see stubborn Jim refuse to go away. It was right there! The perfect hand-off and the passing of the torch. Nope. Then his sons came through the program. Okay when they're done he'll leave too, right? Nope! Jimmy and Buddy have graduated and this fucking guy is still here.

You know who else is still here? Joe Girard III, their incompetent 3 star point guard who refuses to do anything but chuck up terrible shot after terrible shot and follow that with invisible defense on the other end. Over his last 3 games he's 2 for 25 from the field. He'll continue to get starter's minutes because he was boys with Boeheim's son. I genuinely believe he's the worst player Syracuse has ever had who regularly plays 30 mins a night. If this isn't rock bottom I don't know what is.

Please for the love of God Jim, take a nice retirement package and live out the rest of your life in your multi-million dollar lake house. I used to genuinely love watching Syracuse basketball. Going to games when I was there was a fantastic time. It's okay to thank Jim for all those times along with the great Big East teams and also admit he's ruining this program by over-staying his welcome. I'm not guaranteeing G-Mac or Adrian Autry will spark an immediate turnaround, but I know for certain it can't get any worse. Get a new face in there for all of us, we're begging for a change.

P.S. I know I'm going to get the Boeheim defenders in my replies and DMs telling me this team went to the Sweet 16 a few years ago. If that's what your response is to all this then you're as blind and oblivious as the coach is.