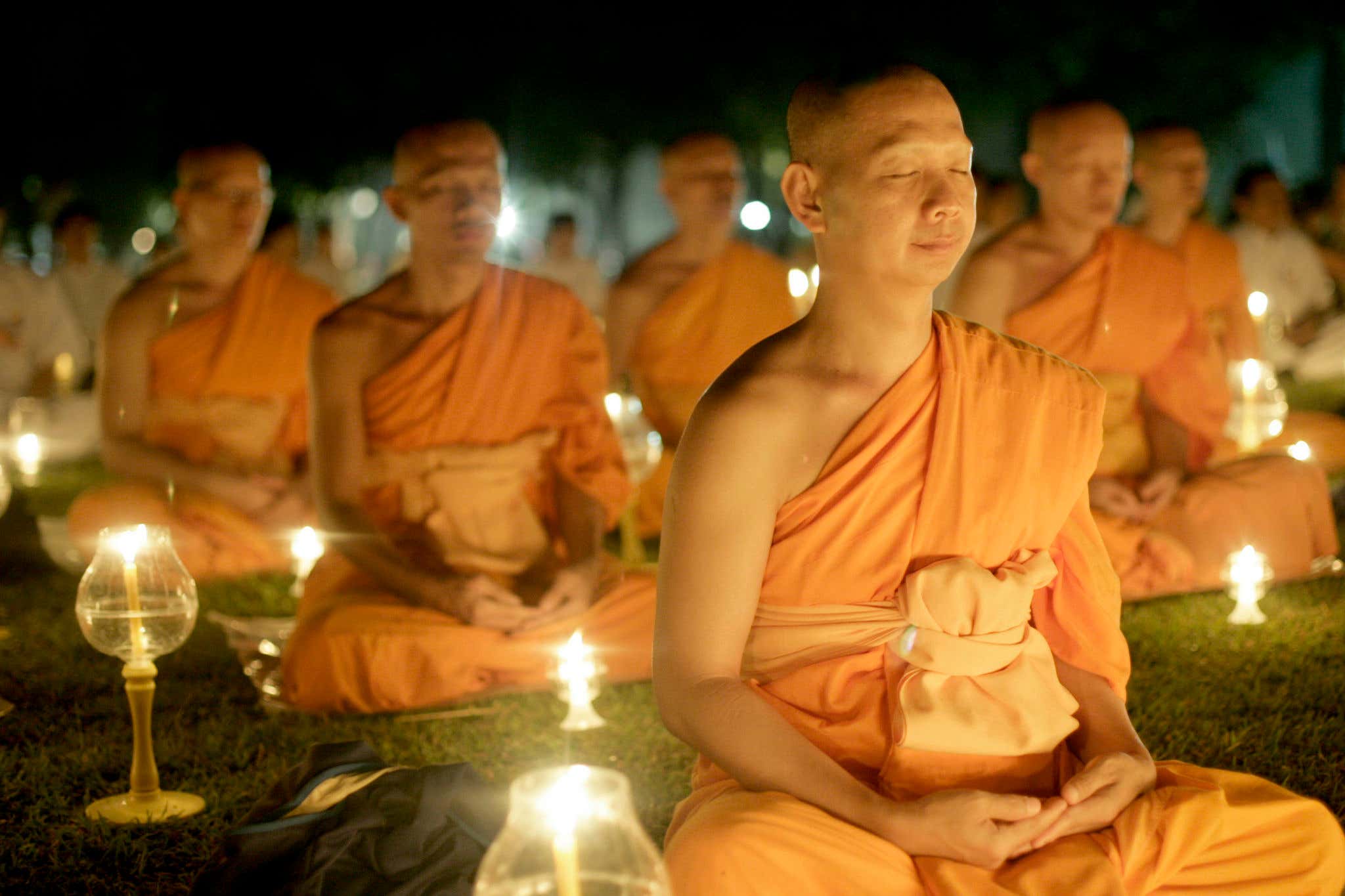 NY POST — Four Buddhist monks in Thailand have been shipped off to rehab after they all tested positive for meth.

The holy men — including the temple’s abbot, or head monk — failed the drug tests in the Phetchabun province’s Bung Sam Phan district on Monday, an official told Agence France-Presse.

“The temple is now empty of monks and nearby villagers are concerned they cannot do any merit-making,” said the official, Boonlert Thintapthai.

So I've been doing some extensive reading this afternoon about Buddhist monks; what it is they do, what they believe in, how the whole operation works. What have you. Of course I know the basics of Buddhism in general — I was 22 once. But I wanted to get a better understanding of the Buddhist monk lifestyle so that I didn't make any ignorant and crass jokes about a major religion; in my experience, something best avoided. People really get upset about that. (Of course that doesn't stop a significant amount of people from finding a bunch of creative ways that bypass modern comment moderation software to call me a Jew but, "two wrongs" and all that.)

I digress. Just wanted our Buddhist Stoolies to know I did my due dilligence.

Let's talk about these crankhead monks.

But first: a meth fact.

Meth Fact: Anyone who has visited Faces of Meth or read a Does This Look Like The Face Of blog knows a surefire indicator of a meth abuser is the absurd scarcity of teeth inside the mouth. Probably you just assumed the meth rots the teeth out. Like candy. But that's not true. Meth is not candy. Meth just makes you stop producing saliva. Spit helps kill germs and bacteria in the mouth. Without spit, the bacteria grows and spreads into the soft tissue down by the roots.  Until eventually the teeth turn all sorts of different colors. And then fall out. Additionally the bacteria spreads into the holes you chew in your cheeks (because meth), making those fester and other gross things. Thus: a Face of Meth is created.

There are no mugshots of the monks so I don't know what their dental or face-hole situations are. (I just like fun facts.) What we do know about the monks is that they were busted in a "temple raid," part of the Bung Sam Phan province's crackdown on drugs. This crackdown seems more hardcore than the "War on Drugs" we're accustomed to in the West, where I think they just patrol the coast and wait for stray kilos to float to the top or wash up on shore and then pose with it on a table then have a really fun party.  Not so in Thailand. When you're barging into a holy temple and piss-testing the freaking monks, you mean business.

Police forced the monks to undergo urine tests after they raided the temple as part of the province’s crackdown on drugs.

The monks, who haven’t been named, have since been sent to a health clinic to undergo drug rehabilitation.

They were also immediately booted from the monkhood in the wake of their positive tests — leaving their tiny temple without any religious leaders.

Of course, the targeting of these monks didn't come completely out of the blue. Their image and reputation as peaceful and serene holy men devoted to the tranquil life of prayer and meditation has taken a hit lately. Just last week, a "drug-addled Buddhist monk" was arrested for "carjacking" and "leading police on a frantic chase" through northern Thailand, resulting in this awesome quote:

'He stole my gold Nissan Navara. I left it in the parking lot with the keys in. I was shocked so I chased after him with another monk in a car for about 20 kilometres, but the monk was going too fast like a race car.'

And as is so often the case with addiction, it's the ones who love and care about you the most who are most affected:

“The temple is now empty of monks and nearby villagers are concerned they cannot do any merit-making,” said the official, Boonlert Thintapthai.

Merit-making is a Buddhist practice that involves followers donating food to monks as a good deed.

Back-up monks are being sent to the temple so villagers can practice their religious obligations, the official said.

The nearby villagers cannot do any merit-making.  They cannot fulfill their religious obligations of donating food to monks as a good deed, because the monks are posted up by the swimming pool at Cliffside Malibu probably.  Back-up monks are being sent to the temple, but who knows how long that is going to take, or how much faith the villagers will have in these AAA call-ups from the monk farm system when they do arrive?

Kind of stressful to have those empty days with no merits-made on the final scoresheet for a believer of Karma and reincarnation.

I don't want to play armchair-general in the Thai Drug War or anything, but I've watched The Wire enough times to know the only way to make an actual difference is to use the little guys as bait to reel in the big fish.  We really think four little monks who aren't allowed to use electronics are the kingpins of a global methamphetamine distribution network?  Even I know the whole thing about being a monk is you can only use anything that is directly given to you. And given to you in a very specific way; there's like a whole handbook of rules to properly give a monk a kiwi.  Seems like a silly headline-grab to go after 4 tweeker monks — Bunk and Jimmy McNulty go after who is supplying the Temple. That's the big fish.