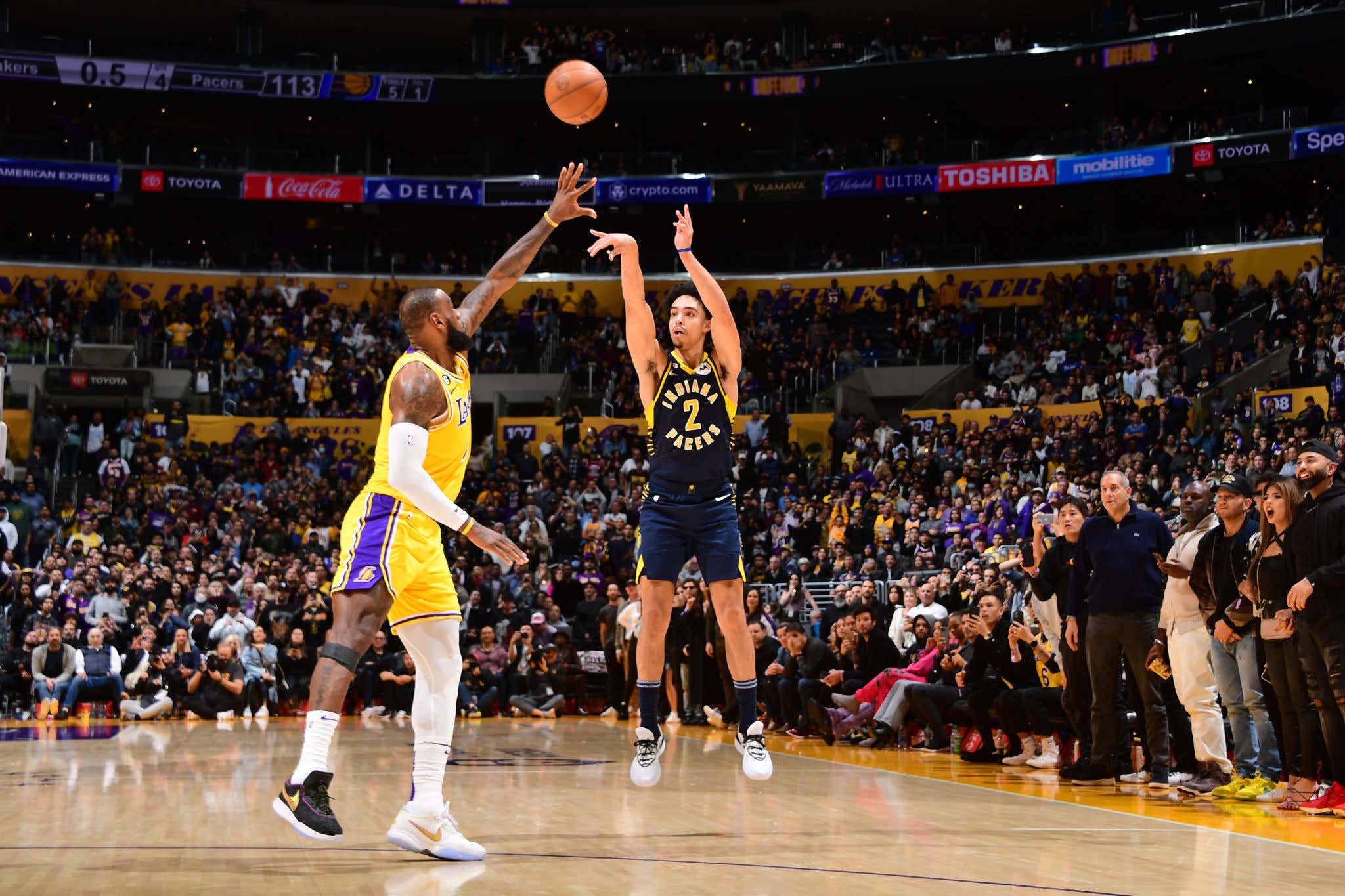 If I've said it once, I've said it a thousand times. The beauty of the NBA is every night is an opportunity to witness something you've maybe never seen before. Never has that been more true than what took place last night out in LA between the Pacers and Lakers.

Heading into the season, I think most people thought that a team like the Pacers would be tanking for Victor Wembanyama and the Lakers would at worst be somewhere in the Play In seeding. And yet, through 20 games it is the Pacers who sit in the 4 spot out East at 12-8 and the Lakers who find themselves in the Lottery at 7-12 while not owning their own first round pick. They beat the goddamn Spurs a few times back to back and you knew what was going to come next

and for about 80% of the game last night it looked as though the Lakers were going to tie their longest winning streak of the year at 3 games. Up by as much as 17 points in the 4th quarter, that should be a lock for a win, especially when you have LeBron James.

But this is where I remind you that the beauty of the NBA is watching something we've basically never seen before. Did the Lakers win this game? No, no they didn't

You see, Tyrese Haliburton and rookie Bennedict Mathurin simply put the Pacers on their backs in the biggest moments

For Tyrese Haliburton, he made NBA history as he helped pull off this comeback

I feel like we need to be making a bigger deal of the season Haliburton is having. He leads the NBA in assists per game at 11.3, he's efficient as shit, and basically since the second he arrived in Indiana he's been one of the best point guards in the entire league. Just because the Pacers may be rebuilding, don't let that take away from what a monster he's been since becoming a Pacer.

Last night when it came time for the biggest play of the game, not only did Haliburton deliver, but how about rookie Andrew Nembhard knocking down the game winner right in LeBron's eyeball???

Watch closely at that Haliburton pass. Not only is it on a freaking rope, but it leaves his hands with 1.6 seconds left on the clock. If that pass isn't delivered directly into the shooting pocket of Nembhard, this shot probably doesn't go in. That's the type of flawless execution that gets rewarded by the Basketball Gods, and as a result that shot hit nothing but net for the win. What a pass, what a shot, what a moment.

For the Lakers, I'd say this is unfortunate to see but I would be lying. I love to see it. I wish to see it several more times this season if we're being honest. This isn't a situation where the Lakers and their fans can do what they always do when they lose and that's blame Russell Westbrook. He was fine. Some might say good even. AD showed up with 25/13/6 on 9-15 shooting. Nope, this one comes down to LeBron. He was a brutal 8-22 (3-10) from the floor, didn't play defense for shit because when does he ever at this point, and in the 4th quarter when the Lakers needed him to stop the bleeding, he responded by going 2-8 in his 12 4th quarter minutes.

To put it simply, LeBron choked and as a result, the Lakers choked.

Remember in the offseason when Mathurin basically called LeBron trash and that he had to prove he was better than him? Well….

But enough about the Lakers. We know they stink, that's not news. As much as they want to believe it, beating the Spurs twice does not actually make you closer to being a title contender. What we should be doing is spending more time giving the Pacers some attention and respect. This has to be their most entertaining start to the season in over a decade. They play hard, their young guys are really freaking good, and they trail the Cavs by only 0.5 games for a top 3 seed. That's crazy given where their expectations were heading into the year.

This is a Pacers team that owns the 10th best offense in the league right now, the 13th ranked defense and the 12th best net rating. They are 2nd in the East in scoring at 115.7 points a night, and already have wins over the Heat, Pelicans, Raptors, Nets, and now Lakers. Nothing we're seeing from them looks to be all that unsustainable either! They're even getting great minutes from someone like Aaron Nesmith (16/4 w/ 4 3PM) and this is what can happen when a young team plays hard every night during the regular season. When a team doesn't quit and plays a full 48, that's how these type of upsets happen. Make no mistake, the Pacers had zero business winning this game

but that's the beauty of the NBA. On one side, you have an extremely embarrassing home collapse due to your best player choking the game away. On the other you have probably the best win of the year for a young team just trying to find their way and develop. If you can't get behind that, you're just an asshole or a salty Lakers fan. The Pacers start is easily one of the best stories not just of the East, but really the entire NBA. Sure it may not last and we might look at them in a few months and they'll be in the lottery. But for now? They're playing as well as any team in the conference and they deserve some respect.