"How are you enjoying your time in Green Bay so far?"

"Has anyone told you about taco day yet?

Every time I hear a new story about Aaron Rodgers I say to myself, "that is the most Aaron Rodgers story ever." And then I hear something like this and realize that there are no bounds to this man's lunacy. I mean who asks someone that question in their first interaction?

To be clear, I have seen Loose Change and wouldn't be the slightest bit surprised if there was more to 9/11 than we are being told. Jet fuel doesn't melt steel, there was no plane debris in the field, coincidental military drills the same morning, randomly finding the hijacker's passport on the street...Socrates would be bricked up just thinking about how much we should be questioning everything about that day.

But to ask that question to a 22 year-old kid, who had just been chewed up and spit out by the worst franchise in sports and is looking for a fresh start with one of the greatest QBs ever as his mentor, is a wild move. Tell the kid there is a pool on the roof. Or that the team meets on the 9th green at nine, and dress nice. Don't ask the kid his thoughts on the legitimacy of nearly 3,000 innocent people dying in a terrorist attack.

Save that question for when you inevitably push your hallucinogenic drugs on his young, impressionable mind.

But then again, should I really be that surprised by the actions of a man who threw away his relationship with his family over a girlfriend? Or that he supposedly used to train with potato chips on his feet? Or that quotes The Princess Bride in team meetings? (Ok, that last one is pretty awesome.)

The problem with guys like Rodgers and Kyrie Irving is that they are so smug and brash in their beliefs. They want you to know they are smarter than you even if the "research" they have done is little more than skimming and scanning YouTube videos while being higher than Nick Cannon's child support payments.

I'm not holding my breath that Rodgers is going to become more relatable and less eccentric in his old age either. I bet the fact that he left Sunday's game with a rib injury and Jordan Love looked like he might be ready to play in the NFL makes him even more of a Looney Tune.

Love probably showed up to the facility the next day and there were informative pamphlets about lizard people and the moon being hollow at his locker. Every TV in the lounge was on Ancient Aliens at lunch and Rodgers "just so happened" to be studying film of the moon landing in the QB room. Psyops at its finest. 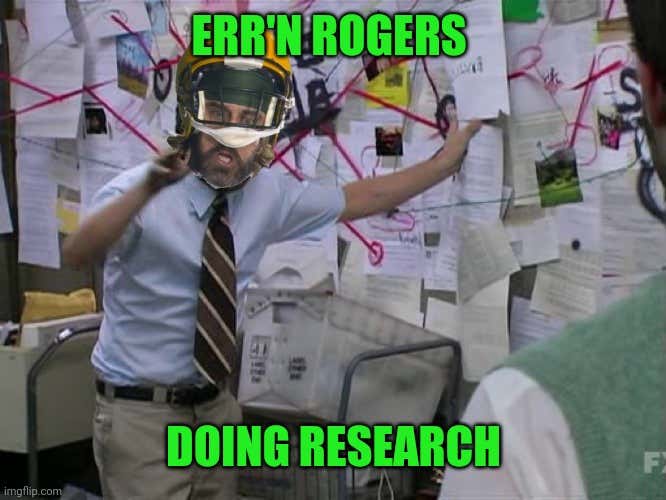 Aaron Rodgers and the Packers are 4-8 and have lost 7 of their last 8 games. He is having probably the worst year of his career as a starter. He already has more interceptions than any season in his last 12 and is completing just 64.8% of his passes.

If you ask me, all this wacky stuff he talks about is just a long con to distract us from the fact he is on the decline and has only won a single Super Bowl. Which is crazy in itself because one Super Bowl is more than pretty much anyone else can claim. The guy has had an amazing career and is one of the greatest QBs of all time.

Then again, maybe his play on the field and his idiocy off of it is just him trying to debunk that theory too. Now that would be some next level conspiracy theory shit.

The interview is worth a watch as there are a bunch of other nuggets in there. You can check out the full interview with Adam Breneman below…