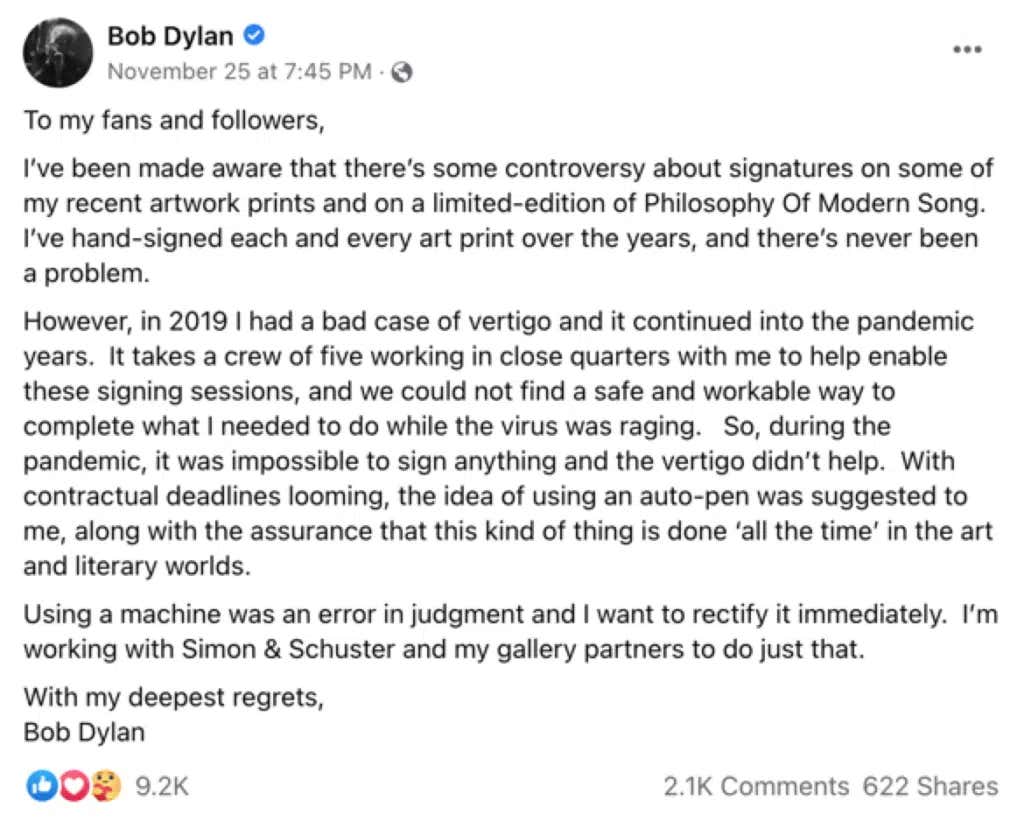 Daily Mail - Bob Dylan has apologized for using a machine to autograph ‘hand-signed’ books blaming 'vertigo and the pandemic' for his decision to do so.

Calling it an 'error in judgement', Bob, 81 issued a public statement to his fans after advertising the books, called The Philosophy Of Modern Song, as 'hand-signed'.

The book was released in November, with a limited run of 900 'hand-signed' editions which sold for £599 / $599. Copies came with a letter of authenticity from publisher Simon & Schuster.

Bob Dylan is catching shit for not hand signing every one of his books, and I have a strong take here that there's absolutely no chance he's the only one doing this. If you think celebrities aren't using an automated systems or passing off autographs to their staff, or using a stamp etc you are lost.

Bob Dylan is simply a scapegoat in fiasco. Name any celebrity or movie star or musician who had to sign 1000 books and I'm positive not all of them were hand signed. Also, why is poor Bob Dylan getting dragged for trying to save some time while he's battling health issues. Poor guy has Vertigo , get off his back. Also who are we to start digging into his medical past, I haven't see someone violate HIPPA laws like this since John Calipari in 1986.

The fact of the matter is this … hand signed is a great term, but unless you meet the person on the street or attend a signing in person, some of those items especially books are stamped or signed by someone else. It's just a fact. Just in case I was in over my head on this topic, I went to a known autograph professional Jersey Jerry who provided these quotes when asked if celebrities "hand sign" all of their books.

"No.Probably not. If I had to guess some managers probably sign stuff for them."

Moral of the story - lay off of Bob Dylan, he's taking a beating for something a ton of people do and eventually they'll get exposed to.