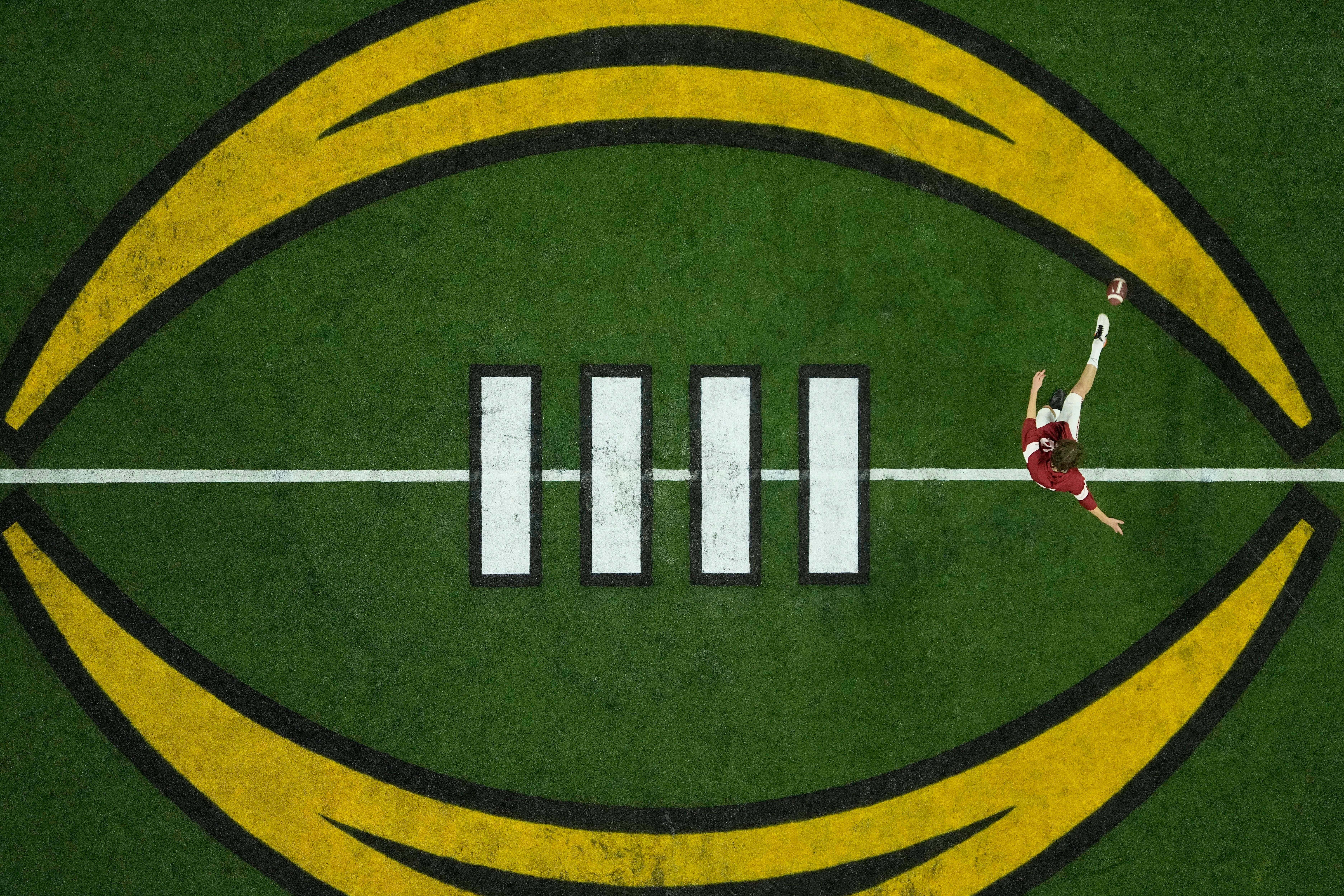 Behind Door A is a very clear and smooth setup.

Behind Door B is a roller coaster with loops that lead to a brick wall of chaos.

It seems like this situation was always looming, but now it's really here, and we as fans must prepare for it. Let's first say that it does seem like we have this conversation every year late into the season but I think it's been a while since we had all out chaos, and if we have not to this proportion. Now let's examine both scenarios.

A- The easy one

UGA and Michigan are pointless to discuss as they are both in win or lose.

TCU beats Kansas St and rips out my heart of an 18-1 future in the process.

UGA,Michigan,TCU and USC are your playoff.

Easy. But you didn't come to this blog for the easy scenario, you came for the chaos.

MIchigan or Georgia are both in regardless, but if they both do lose, their could be some debate on who becomes overall #1 especially if TCU loses. Also if TCU wins does TCU become #1 and the committee give one of their dream National Title games (UGA-Michigan) as a semifinal instead of a final? Again, that's the least of the chaos but just keep that in the files down the road.

Let's start with Friday night and scenario 1 of this chaos.

UGA Michigan in regardless.

USC loses to Utah. A 2 loss team has never made the CFP, and I don't think a 2 loss Pac 12 non champion would break that trend. So USC is out. Utah doesn't have enough of a resume and has 3 losses so they're out before this game even kicks off, even with another marquee win. Pac 12 once again…

eliminated from the playoff.

TCU wins vs Kansas St. TCU locks up a bid.

Who is the 4th team?

The candidates would be :

- 1 loss Ohio St (who reminder got trounced by Michigan). The same Ohio St who's marquee wins were Notre Dame (week 1) and State Penn. Not necessarily a "WOW" of a resume.

- A 2 loss Alabama who didn't win their division or reach the SEC Championship game. The committee has never wavered on a team with 2 losses, but we all know they treat Alabama differently.

- A 2 loss Tennessee who BEAT ALABAMA HEAD TO HEAD. Again, Tennessee finished 2nd in their division, didn't make the SEC title but did beat Alabama head to head. Now the big X factor is here is that Hendon Hooker is injured. Everyone is saying they will not put a Tennessee team in without Hooker. I see the point they are a different team, but I'm reminded of Kenyon Martin and Cincinnati getting fucked in the NCAA Tournament.

I know they are a different team, but why did we play the games if they are just going to eliminate a team based off predictions of the future. I don't like saying a team isn't the same moving forward via injury and then penalizing them. If they deserve to be there let them play.

Now before you decide on who belongs (for the record I just asked Brandon Walker that question and he said it's Ohio State in that case. Insert your own Buckeye Brandon jokes.)

Imagine Scenario 2 of the chaos…

UGA and Michigan are in…

and for spots 3 and 4 you have to choose between those teams above with a 1 loss TCU mixed in.

Options in that case would be :

- 1 loss Ohio St (who reminder got trounced by Michigan).

- A 2 loss Tennessee who finished 2nd in their division, didn't make the SEC title but did beat Alabama head to head.

- A 1 loss TCU who didn't win the B12 Championship

I think I would put TCU in first of those teams. I have a hard time penalizing a team who went undefeated in the regular season and their only loss was a championship game. I also think the closer the game, the more TCU gets in. We're going to fault a team who loses a heartbreaker to Kansas St who will likely finish in the Top 10 with a win? I wouldn't. I'd slot TCU as 3.

The 4th spot is where shit really gets hairy. Alabama, Tennessee and Ohio St are all sitting there with cases for them, and cases against them. What will the committee do? Your guess is as good as mine. I think Ohio St is the most deserving of those three, but the committee loves the SEC and loves Alabama, so don't be surprised if the Tide sneak in- even though Tennessee beat them head to head (did I mention that already?).

Now, one last insane curveball that people are going to think I am saying because I love Kansas St and the way they play football, and that I won my Game Of The Year with them.

This wasn't even something I went looking for. It got tweeted at me by Meek Phil that a nerd site is saying we are not talking about Kansas St enough as a playoff dark horse.

If you notice, Kansas State would have the highest percentage of the remaining contenders. Again, I am not expecting a 3 loss team to all of a sudden be in the playoff, but the nerds with the numbers bring up a good point that we should reward conference champions.

So to sum it up, the CFP is either going to be a very boring selection show, or a very chaotic selection show. I am personally rooting for the chaos. I think it's been a great year of football, and nothing is more entertaining than college football fan bases tearing each others lungs out in debates of who deserves to be in (after said fan bases watched their teams not take care of business in the biggest games of the season). I am rooting for all the chaos and you should too.