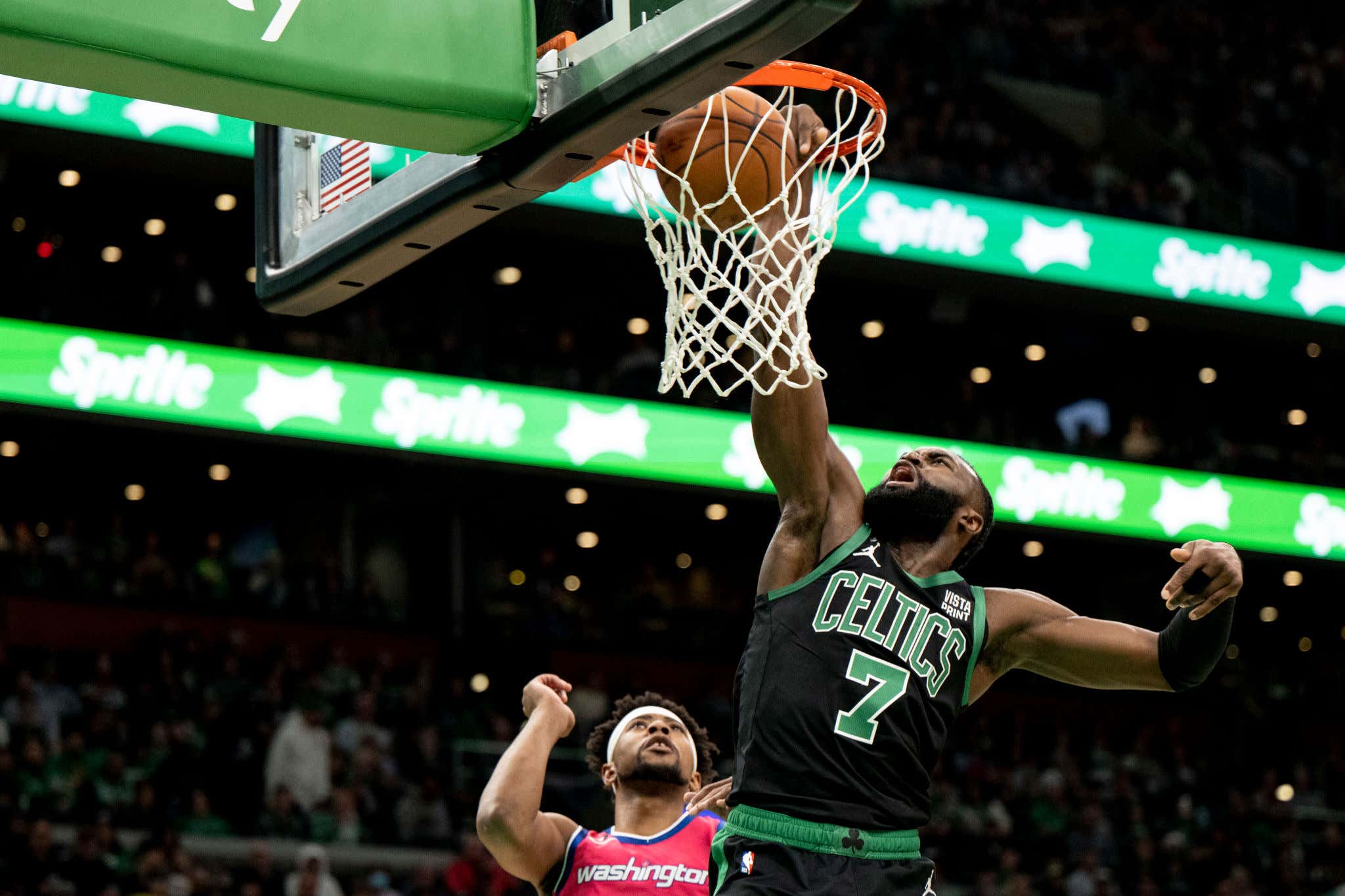 I know I shouldn't have to say this, but I will anyways so the hardos of the world can calm down

DISCLAIMER: It is still pretty early in the NBA season

Having said that, we are technically at about a quarter of the way through the 2022-23 NBA season and one thing is unequivocally clear.

Once again, I'm sorry if this offends but that is the reality in which we live right now. I could understand if you think I'm just some sort of blind homer (which might be true), but this is not a case of my homerism taking over my fingers as I type this blog. This is legitimately a fact

Even their defense, which started the year being absolute dogshit, has taken a turn for the better with the Celts coming in 10th in the NBA over their last 11 games (10-1). To have a top 10 defense for essentially half of your season so far, all without Rob playing a single second, is pretty good in my humble opinion. They own the most road wins in the East (7), are 9-1 at home while being 8-2 vs good teams and 8-2 vs shitty teams. No matter how you want to slice it, this team is a fucking WAGON.

I just think it's important that we stop and take a second to understand what we're watching right now. I thought Jaylen said it best after another win last night. We aren't even seeing this team play their best basketball yet

Mind you, this is coming off a game in which Jayson Tatum did not play. For pretty much every team in the league, if you take away their best player, things probably don't look all that great right? Well for this team… 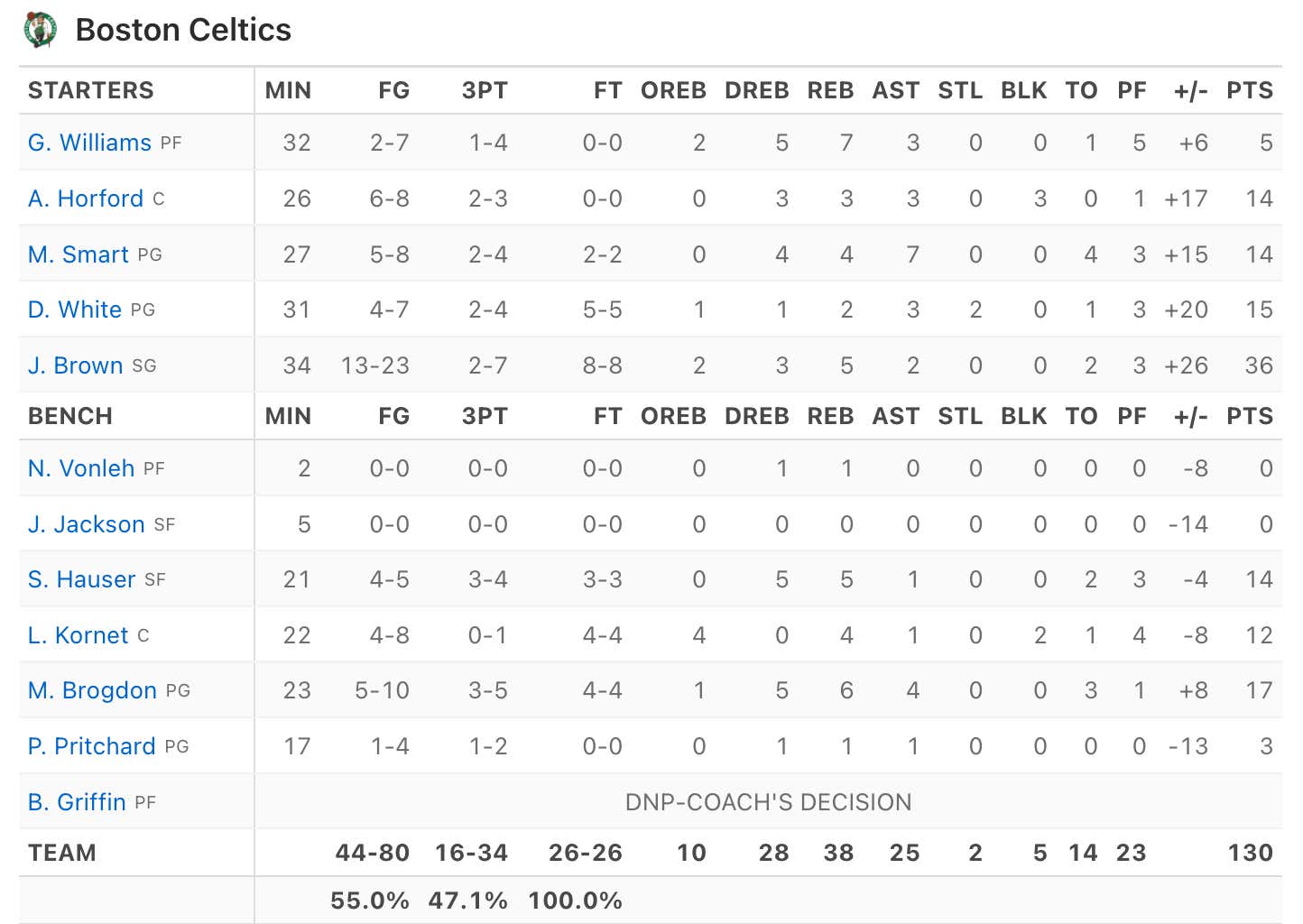 What we are seeing can only be described as Basketball Nirvana. If they aren't there yet, they're certainly knocking on the door. As fans, we've prayed for times like these. The crazy thing is, the two best players on the team haven't even entered their prime yet!

Remember, Joe Mazzulla is 34 years old and has never been an NBA head coach before. Through 20 games, not only is he showing he's ready, his offense is legitimately historic. The league has never seen anything like what the Celts are doing right now at any point in their history. Mazzulla Ball is running through every opponent the Celts have that isn't named the Chicago Bulls. The Celts have only lost to two teams all year, and only two of those losses have come in regulation!

Just think about that for a second.

In 20 games, this team has only lost 2 games in regulation…to one team. That's insane and I don't care who your favorite team is.

Then you also remember they're doing this without arguably their 3rd best player and it hits you that there are still levels this team can get to. That's some scary shit for a team that's already proving to be the best in the NBA.

When you go down the list, pretty much everything we as fans were maybe nervous about heading into the year has turned out to be a non-factor or actually be a positive.

- Grant not getting an extension

- Being the hunted for every other team in the league

Of that list, what would you say hasn't worked out through 20 games? We've even already overcome some Brogdon injury scares and still are winning at an elite level. This team is currently on a 65 win pace!

You know things are reaching that nirvana state when even your misses are fucking beautiful. Take this possession in the 2nd quarter last night

Even though White missed the three (43.9% from three this year), it's a perfect example of this team at its best. The ball is moving, guys are being unselfish and playing the right way. Watching them play, I can't shake the feeling that I'm watching basketball heaven on a nightly basis. When we say this team has figured out the formula of how to win at a high level, this is it. What you're seeing every single night is the execution of that formula. Once they figured that shit out last January they've never looked back.

Since January 29th of last season, the Celts went 27-8 to close the year, then 14-10 in the playoffs (sigh), and then 16-4 this year. Add all that up and you see a team with a 57-22 record, easily the best in the league over that timeframe. This isn't some sort of hot streak where you see a team play well for a week. This is simply who the Boston Celtics have become.

That doesn't mean they are perfect or without flaws. Let's not get carried away. Of course they are going to have their moments where they play like assholes and make us sweat out games that we have no business sweating out (like last night). They'll have moments where maybe they are careless with the ball or maybe they fall in love with the deep ball instead of being aggressive, I mean they are human.

But what we are seeing is a team that has a collective mindset. Their goal isn't to be the best team in November, they want to be the best team in June. The pain of that Finals loss has changed the DNA of this team and you'll never be able to convince me otherwise. The way Tatum and Brown talked the talk during the preseason/media day and now are walking the walk has set the tone for the entire team. Smart playing the best basketball of his life and building on that huge step forward last year is further proof that everyone is on the same page. Brogdon coming in and being exactly what they needed while not giving a shit that he's coming off the bench is huge. Payton Pritchard staying ready and then causing chaos the second Joe puts him in shows the collective buy in.

We have a long way to go, I think everyone will agree with that. But in a season that had a ton of questions mixed in even extreme pressure and high expectations, the Celts are rising to the occasion and then some. It's been beautiful to watch.

And oh yeah, this is coming in about a month. Buckle up.