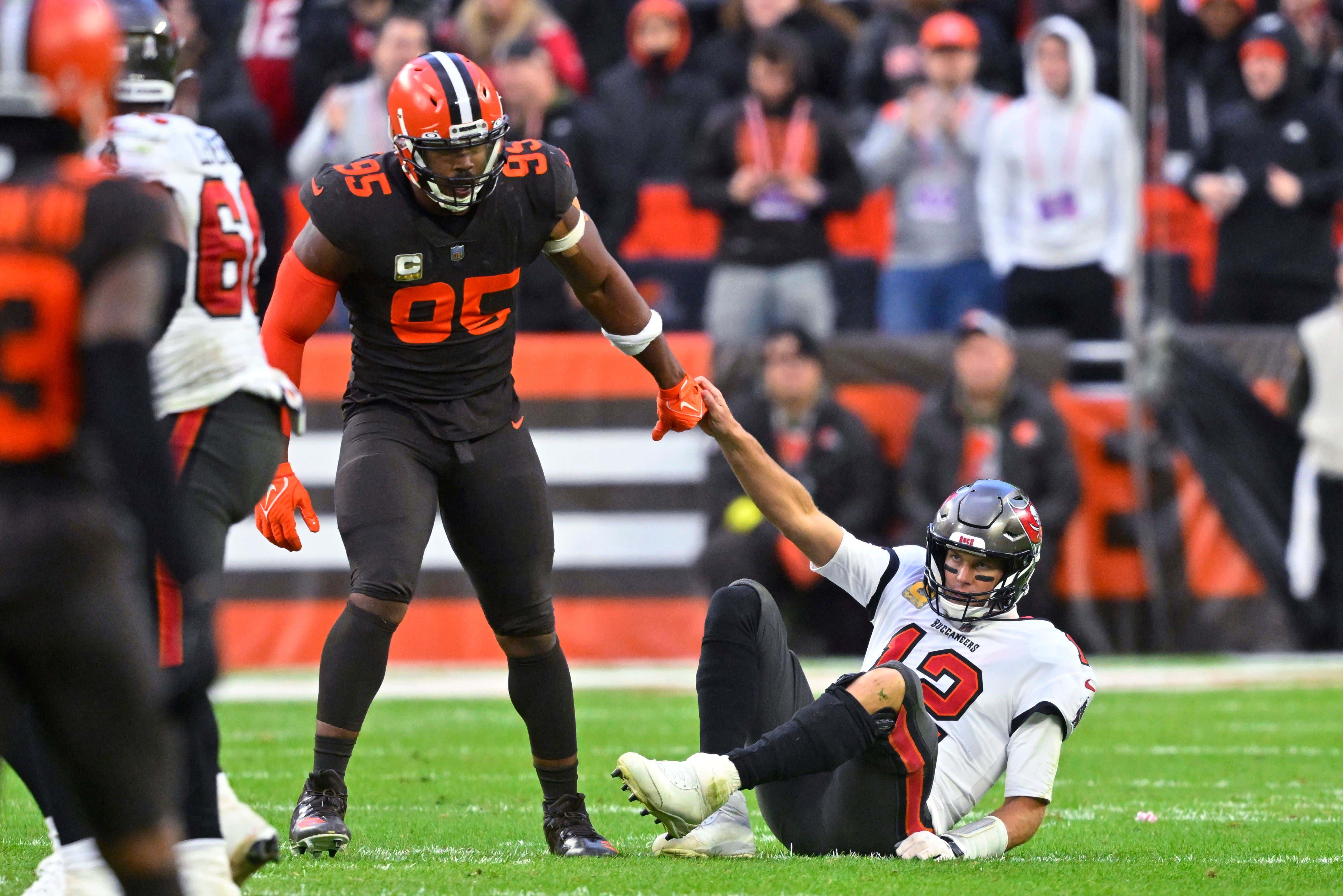 When you've been doing anything in this life for 23 years, there are going to be ups and downs. Times both good and bad. Even if you've been doing said thing at the level Tom Brady has played professional tackle football. Which you haven't. No one has. Still, even for him, achieving incomparable success and sustaining it for an unprecedented amount of time, it hasn't all been unbeaten seasons that end with silver trophies in his hands and pieces of confetti landing on his perfectly coiffed, pH-balanced hair. There have been disappointments baked into all those triumphs.

Yet this week, he achieved a career low. He went into Cleveland 7-1 in his career against the Browns, with a chance to gain absolute control over the NFC South. Instead, he got this:

Brady is under .500 this late in the season for the first time since those two games he dressed as a rookie on a rebuilding Patriots team. And in doing so, has achieved a few career firsts. None of them good. Whether it's statistical:

… or schematic. Because in what had to be for the first time in forever, Brady's coaches did not trust him to win a very winnable game. A fact which is not lost on anyone:

And the Bucs choked.

They had a ticking clock, they had a last-place opponent, they had cold beer in their future.

And the Bucs gagged. …

It doesn’t matter that Tom Brady is in the huddle … [t]he truth is that this team cannot be trusted. Not with a lead, and not with your heart. …

Given the ball with a 17-10 lead and 2:35 on the clock, the Bucs needed just a first down or two to swat the Browns aside, but Brady and the offense blew it …

Implored to give the most prolific fourth-quarter passer in NFL history a fighting chance at a winning drive by using his three remaining timeouts, coach Todd Bowles brain-farted it. …

Once they took the lead late in the third quarter, the offense curled up like a frightened armadillo. It began four consecutive drives with running plays that produced 1, 11, 2 and minus-3 yards.

Those four drives produced a grand total of 25 yards on 16 plays.

Even when given a chance to stomp on Cleveland’s throat early in the fourth quarter, Bowles elected to punt rather than go for the first down on fourth and 2 from the Browns 37-yard line. The punt went in the end zone, and the Bucs netted 17 yards from that original line of scrimmage.

Later, when the Browns had moved into the red zone for a potential tying score, Bowles could have preserved time for Brady by using a pair of timeouts. Instead, he let at least one minute unnecessarily tick off the clock before the Browns tied the score.

On their final drive of regulation, the Bucs eventually moved into Cleveland territory, but Bowles — again — bypassed taking a timeout and later explained that was because the game was destined for overtime.

Pardon that long excerpt. But when you're reading the raw emotion of pure frustration expressed so eloquently, it's hard to shorten it to the SparkNotes version without diminishing it. Here's the same feeling, abbreviated:

And therein is the reality of not only Brady's head coach, but his offensive coordinator today. Both #FIREBOWLES and #FIRELEFTWICH have been trending since about 5pm Sunday. And speaking personally, as a shameless Patriots honk who's frustrated by a 6-5 record, it's all I can do not to laugh at the predicament the Bucs have put themselves in. It's only out of respect for Brady and the personal hell that 2022 has been for him that I keep the Schadenfreude to a minimum.

Still, there's too much irony here to ignore it. Whatever issues Brady had with his coaches in New England, and they were many, there was never a doubt that the grownups were in charge. For example, I have no doubt he was bitter and confused as to why Malcolm Butler stayed on the sidelines all game a Super Bowl LII where Bill Belichick's defense couldn't get the Eagles off the field. That frustration was visible in his Tom v. Time docuseries. And in response, he pulled back somewhat. He started skipping OTAs and, well, producing docuseries about himself. But the following year, won another Super Bowl for that head coach. Because even when he didn't agree with the man's decisions or methods, he never lost respect for him.

And that feeling was mutual. For sure Belichick never lost faith in his quarterback's ability to win him a game. In that 2018 AFC championship game at Kansas City, Brady attempted 16 passes in the 4th quarter and another nine in overtime, including converting 1st downs on three 3rd & 10s. All despite the fact he threw an interception halfway through the 4th, and another that was called back on Dee Ford's legendary Lining Up Offsides penalty. Belichick's faith in his QB was never in question like it is in Tampa.

The irony being that this is the coaching situation Brady wanted. That he, in fact, orchestrated. He reached the point where he was so sick of getting scapeGOATed (See what I did there? That sort of wordplay is the Old Balls Difference.) by Bruce Arians, that he flew to the UK to meet with Bucs ownership at a soccer game. A day later he was back with the team. And a respectable amount of time later, Arians randomly announced he was taking some other, undefined position on the staff, just not as head coach. Bowles was promoted because he's a defensive coach who would presumably stay out of Brady's way as he ran the offense he ran in New England for 20 years. And that he began running over Arians' objections two weeks into his first season in Tampa. But now it's Bowles and Byron Leftwich taking the heat for it, while Brady is getting a pass like he's a victim of circumstances.

But I am not gladdened. I am saddened. It's like something out of a Greek tragedy, the hero humbled by his own hubris. Brady reduced to just another player on a failing team, desperately replacing its coaches every other year like they're Jacksonville or whomever. I never wanted this for him. Even knowing that he was in talks with Dolphins ownership while under contract with the Patriots all through his final season. I'd hoped he go out with his dignity intact. Preserved for all eternity.  But his decision to chase one last ring cost him not only in his personal life, it reduced him to this pitiable figure mired in a coaching controversy, like just another nobody.

Terribly, terribly sad it had to come to this. Buy a shirt in honor of better times.