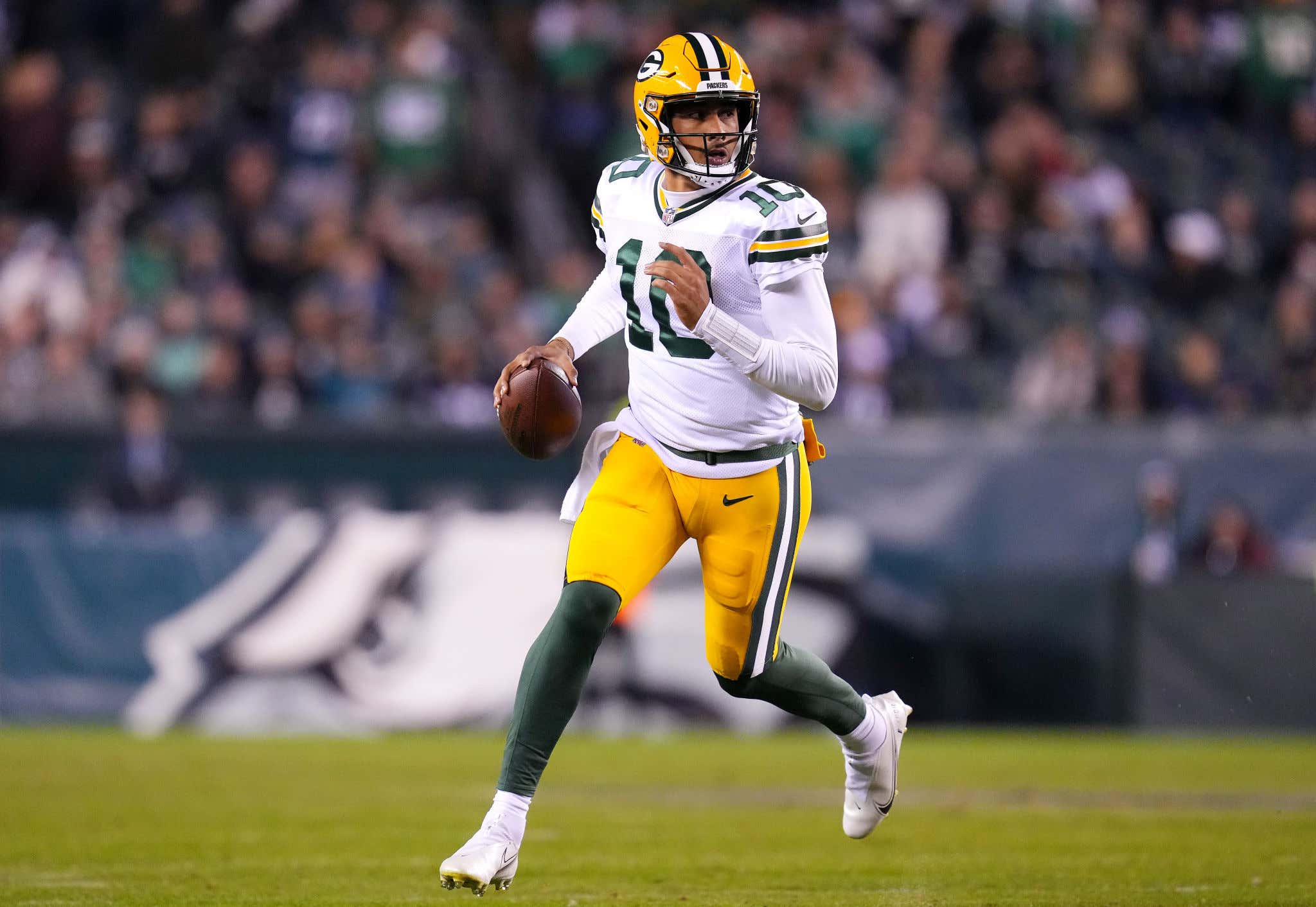 Old age, injuries, shitty play, and maybe a lack of ayahuasca? However you wanna slice it up, 2022 has not been Aaron Rodgers' year. Alright he made $42 million so things could be worse, but in terms of on the field play things haven't exactly gone to plan.

Part of it has been the bitch of a broken thumb he's played through. Part has been the loss of Davante Adams with seemingly no game plan from the front office to replace his production. Actually sorry their plan was to bring in checks notes Sammy Watkins and two rookies fresh out of the water to replace the best receiver in football. Part of it has been father time beginning to catch up with soon-to-be 39 year old Rodgers. At the end of the day, 12 hasn't been his best and when you factor in how sunk this ship currently is, it might just be time to get a real look at the kid.

Quick aside real quick before we get into Jordan Love.

I view Packers defensive coordinator Joe Barry the same as a I do war criminals. What this man has done with the talent this defense possesses is beyond reprehensible. Green Bay put up 33 points against a very good Eagles defense. They gave up 40. These assholes surrendered 360 yards on the ground to the Eagles.

You see that kinda stat line in college when an elite SEC team goes up against the Citadel. You got it in a Sunday Night Football game! Joe Barry should have been left in London after the Giants game. It's malpractice to continue letting that man run this defense. That was just about the least prepared defense I've ever seen. I mean it's like Barry had no clue Jalen Hurts was capable of running the football. Nothing like giving up the 5th most rushing yards to a QB in a single game ever. Hell yeah! Pray that Jim Leonard actually wants to become the defensive coordinator when the job opens up this time.

The Packers now stand at 4-8 and the date that they become mathematically eliminated from the playoffs is fast approaching. They're much closer to last place in the conference (Chicago) than a playoff spot (Washington). A few weeks ago after the rock bottom loss to the Lions I said Jordan Love better get a look once the sand in the time glass runs out. After what we saw last night that date might have to be expedited.

First of all let's acknowledge the symmetry in all this. Rodgers exits with a rib/oblique injury in the 2nd half thus opening the door for Love to get in the game. Similar events happened almost 15 years to the date.

Love's first drive of the game? He found rookie Christian Watson for this long catch and run for a score.

Now I'm not here to rave about a quick slant throw. I will say Christian Watson may very well be a star in the making. Now that he's shaken off the rookie jitters that man is playing with a crazy amount of confidence and is rocketing up the rookie ranks of WRs. This season has had a lot of negative come with it, but Watson's emergence has been a true bright spot. He's a true weapon.

Let's also be fair, the Eagles were playing some pretty conservative defense during the Love drives. Not like he did all this in a tie ball game, but that being said this was a night and day quarterback compared to the dude we saw against the Chiefs last year. I mean this back shoulder throw was perfect, Jones just dropped it.

Here are all the throws that will certainly get over-analyzed by every sports talk show today. I'm expecting Colin Cowherd to do two hours on this video alone.

That was a man out there with confidence. He made quick decisions, looked poised in the pocket, and was FIRING the football. I honestly don't remember the ball exploding out of his hand like this last year.

Would be a real shame.

Now I don't wanna do that thing where I read into two drives and 9 throws too much, but I'm pretty certain Jordan Love is not a backup in this league. I still completely disagree with drafting him when they did considering what the win-now team needed, but here we are. He needs games to show what he's got, especially if 12 is done after this year.

*By the way if Rodgers wants to keep playing and no team wants to touch his contract I don't know what the fuck they do. I'm banking on retirement or a trade presenting itself. Packers need to acquire the Men in Black flash thing and make everyone forget the Russell Wilson trade happened.

A problem here is I don't think Matt LaFleur has the balls to tell Rodgers his season is over before they're mathematically eliminated, but he probably should, right? Rodgers was sorta asked about this in the presser and said he wants to be out there until they're out, mentioning a level of pride involved with that decision.

After the game Rodgers appeared to be fine physically. I mean he's beat up, but you can tell he wants to keep playing. He was worried his lung got punctured and couldn't breathe because of it. He said as long as he checks out on Monday that he'd be in line to play against the Bears this coming weekend. You know he wants to destroy them one last time, especially after seeing what Mike White did yesterday. Let's say he plays against Chicago, whatever happens I think that should be his final game of the season. You've got the late Week 14 bye week after that before the final 4 game stretch. Jordan Love should be the team's starting QB for those games while they put Rodgers on the IR. Rap reported earlier in the day that Rodgers' thumb issue is a lot worse than what's being led on.

After the bye let's hand the keys to the kid and see how he looks. At some point you need to give him a real test that's not in practice or the preseason. While the next move with Rodgers and Green Bay always seems to be a mystery, that really seems like the obvious play.