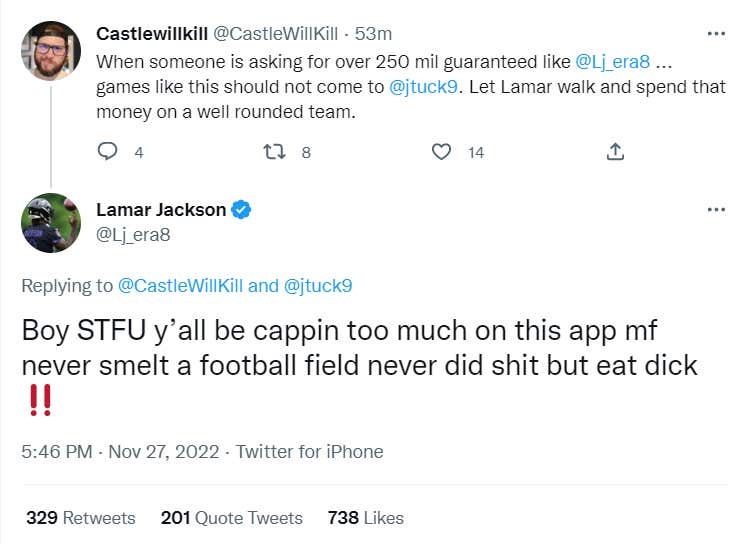 Ooooooo man. Lamar is going OFF on the bird website.

He's certainly got some choice words there. Me personally? I wouldn't use most of them but I do have to admit - it's good to see some rage and frustration coming from QB1 because we're all feeling it here in Baltimore.

The Ravens have been sleepwalking the past two weeks against bad teams. Today they almost got away with it (thanks to Lamar unleashing a total fuckbomb to Desean Jackson of all people) but they eventually got burned. That has everybody around here in a rage and understandably so. This team is capable of so so much and nothing seems to be clicking. Lamar didn't play his best game today but he's also throwing to Mark Andrews and a collection of WR3's (at best).

DeMarcus Robinson went the fuck off last week but he's gotten virtually nothing else from his WR's since Rashod Bateman went down. Today's 16 completions included only 6 receptions by WR's. Last week against Carolina? Demarcus caught 9 of the team's 24 completions and the rest of the completions except 1 (to Duvernay for 3 yards) were caught by non-WR's. The deck is stacked against the guy and he's frustrated. As he should be. So forgive me guy for going a bit off the hinges here.

Is it a good look to see your QB going off on clowns in the menchies? It's generally not. But it's good to see some emotion and know that he's on tilt at the moment, just like the rest of us. Time to get back in the lab and turn this shit around.