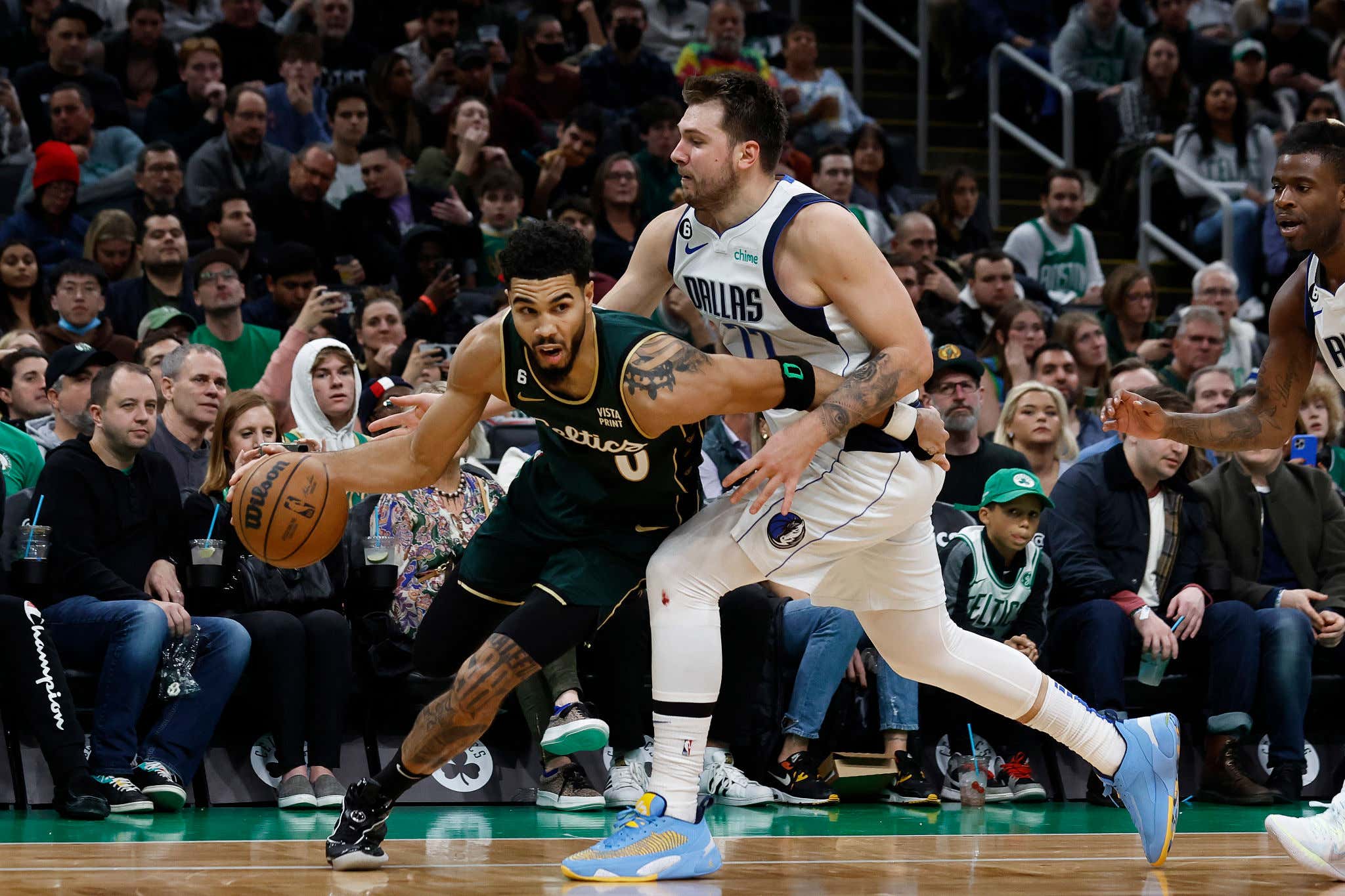 Quick, tell me who you think the current leader for MVP is in the NBA?

All of those answers would be incorrect. I'm sorry if this offends, but by now you should know this blog operates in fact and reason with a big old swig of Celts Kool Aid.

The answer the judges were looking for, was Jayson Tatum.

Take the showdown between him and a guy many think is the MVP in Luka Doncic. It's not like Luka isn't having a MVP worthy season, he's been ridiculous. The only problem is Jayson Tatum has been better and last night was yet another example of it. Sure Luka may have had 42/8/9, but Tatum's 37/13/5 was not only more impactful, he also actually played defense

The two way dominance of Tatum this season is what separates him from Luka in my opinion. That's just an element of the game Luka does not have. He's one of the most unstoppable offensive forces I've ever seen, but the dude can't defend for shit. Tatum on the other hand is pretty much as lethal offensively while also giving you All NBA caliber defense every single night. To be in the rarest of rare air, you have to play both ends of the floor. Tatum shoulders a heavy offensive burden too, but he does not sacrifice on the defensive end, and last night was a great example of that.

I think we can all agree that the most important thing for this team and everyone on it is the end goal of getting back to the Finals and winning the whole thing this time. If they win some individual awards along the way, cool. I want the players to focus on the big picture and let us fans worry about shit like the MVP. We have experience with this stuff. It was just last year we basically won Smart the DPOY as a fanbase. I feel confident we can do the same when it comes to Tatum and the MVP.

As someone who has watched every second of Tatum's career, as we start to enter his early prime it's so clear where his improvement has been. The game seems so slow for him, nothing really is forced anymore, and his approach is exactly what we were praying for during his first few years. We're seeing a way more aggressive Tatum who is no longer shying away from contact. His passing, vision, and ability to read and react to defenses is almost second nature at this point. The Mavs tried to double him and Tatum immediately knew where to go with the ball. There was no panic, no ball stopping, just great basketball.

The Celts are the best team in the NBA right now and that's really not even up for debate. Their offense is historic, their defense is improving, and their 3rd best player comes back in a month. But as we know, this team goes as Tatum (and Jaylen) go. We've all prayed for Tatum to not start the season slow in years past, and this season it's not only happening, but it's happening at a legit MVP level. They say in the NBA to win a title you need a top 5 player. History pretty much has proven that to be accurate.

Last year we saw Tatum make 1st Team All NBA and the Celts were 2 wins away from a title. This year I don't think it's insane to say he's playing at a current top 5 level considering the last time I checked the MVP is usually a Top 5 player in the league. Everyone knew the deal with Luka coming to town. MVP candidate vs MVP candidate. Those are the games you need to show up and stand out in.

Not only did Tatum do just that, he was dominant on both ends of the floor. Just like an MVP should be, who is currently +400 on the Barstool Sportsbook 👀