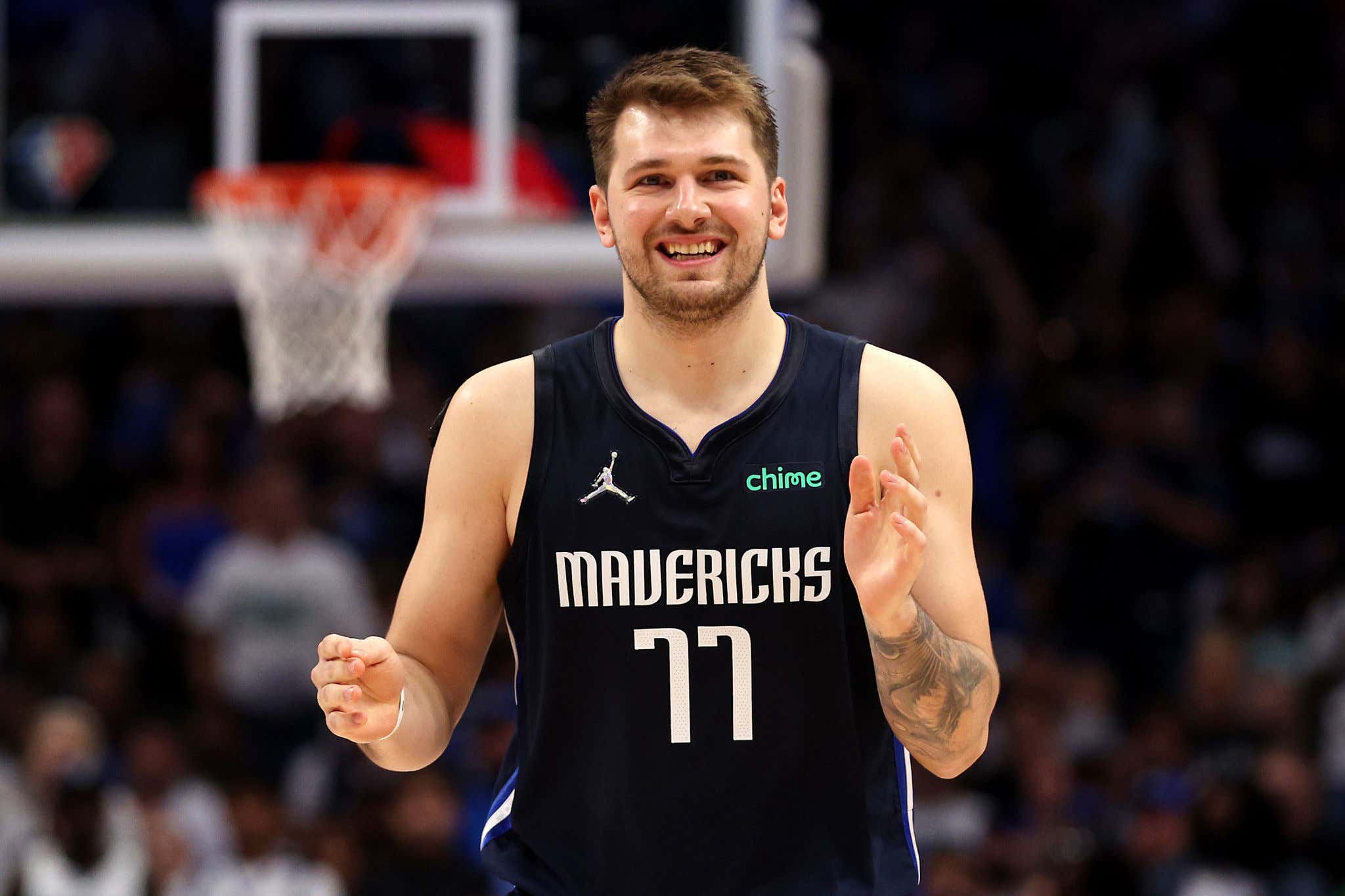 When your favorite team is lucky enough to draft a generational talent, it can truly change your life. There are certain players that pretty much change the entire direction of a franchise just by existing. It's why teams tank (outside of this season apparently) and will punt on multiple seasons as they continue to search for that blue chip, franchise altering talent.

By all accounts, that is what the Mavs have in Luka. This isn't news, we all understand how fucking incredible Luka is as a basketball player. In the years before he arrived, the Mavs won 33, 24, and 33 games. Luka showed up in 2019-20 and instantly the Mavs won 43 games and made the playoffs. They won another 42 games in the shortened season of 2020-21, and then 52 last year during their WCF run. That was the most wins this team has had since the 2010-11 season. You may remember that as the year they won their only NBA title behind another generational international talent. The point is, their decision to trade for Luka could not have worked out better in terms of how it turned around the franchise and the fact that he's a legit MVP candidate.

But this is also the NBA in 2022. We now live in a world where contracts don't mean dick. Players are sitting out or demanding trades with 3-5 years left on their current deals. When you root for a team that has one of these young generational talents, there's always going to be a part of you that in the back of your mind or deep in places you don't talk about that one day that player might leave. It doesn't matter if you're a small market, big market, contender, rebuilding team, whatever. On some level there's always going to be that fear given how things now operate in today's NBA.

Which brings me to a recent interview where Luka was straight up asked about this question and his future with the Mavs. To put into context how insane this is, Luka legitimately just signed his 5/215M extension. He's in Year 1 of this thing and doesn't even have a player option at the end of it! 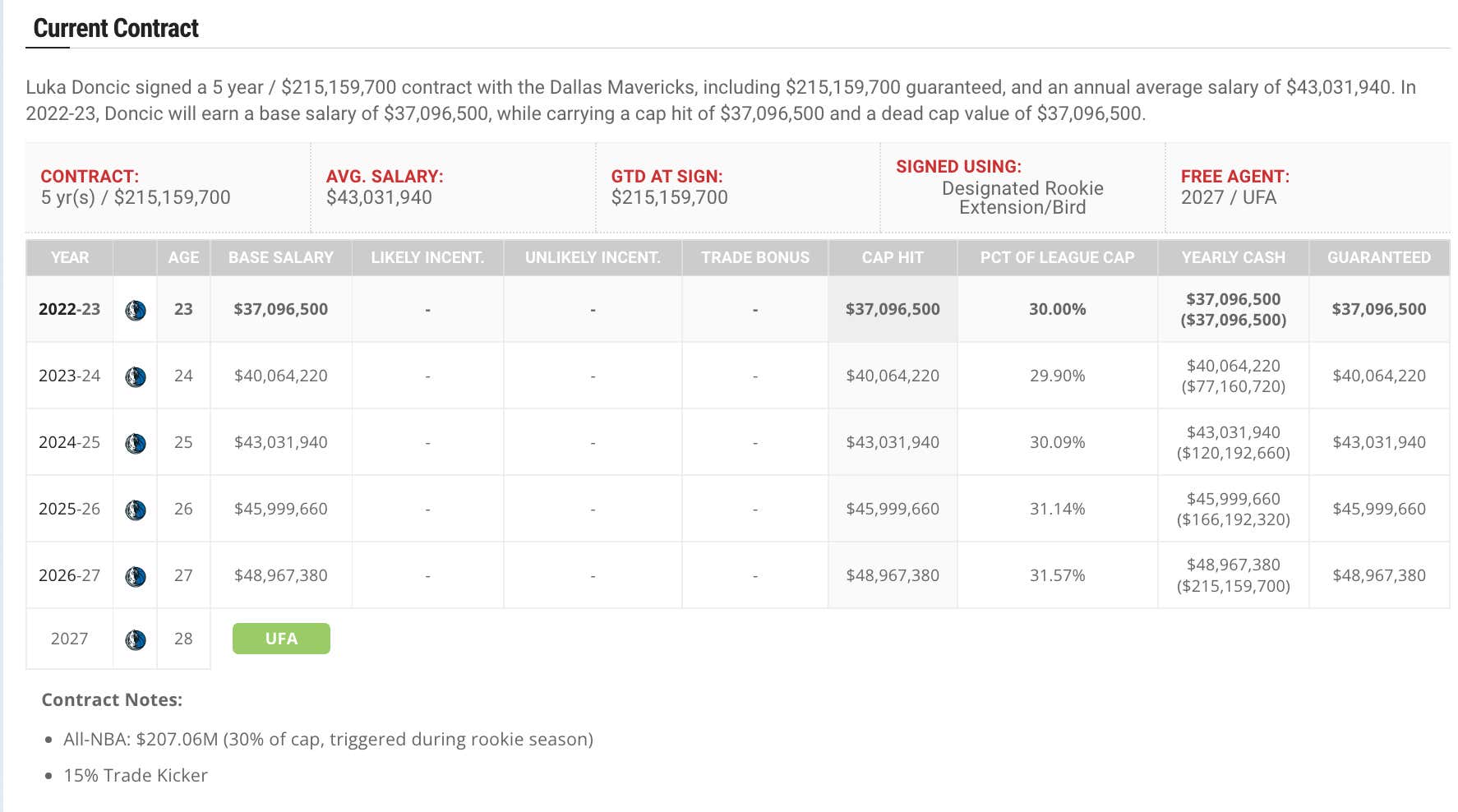 I'm not a Mavs fan so I can't say for certain, but is this really a thing? People are legitimately already worried about Luka leaving if the Mavs don't win an NBA title in the next year or two? That sounds crazy to me considering Mark Cuban loves Luka more than his own family. He's an owner that has proven to pay whatever to contend, plus there's the whole income tax thing in Texas. I can't imagine Luka would be eager to give up a situation where he basically has the highest usage rate of all time while making max money on a big market team.

I don't know how I would feel hearing that answer. It's not too different from what we heard from Giannis back around the time he signed his extension. Basically, you have me for 5 years, and then who knows but there's no need to worry. So while Luka didn't flat out deny that he'll one day leave, this is the type of question where you'll never make everyone happy no matter what you say. I'm pretty sure he's aware of what happened with Kyrie when he publicly committed to Boston only to immediately leave.

The fact that we even have to ask these questions to a player with 5 guaranteed years left on his deal is kind of the problem the NBA has right now. Extensions and guaranteed contracts aren't even worth the paper they're written on. If this was 1 or 2 years away? OK I get it. But this is literally 16 games into Year 1 of Luka's extension. That feels….maybe a little early

Having said that, my guess is the root of this fear of Luka leaving probably stems from how the Mavs roster is currently built

Essentially, if Christian Wood, who has basically been their 2nd or 3rd best player walks in UFA, the Mavs are stuck with no real way to replace him given the fact that they are over the cap. In fact, since they are a tax paying team this year, they'll only have the tax payer MLE to use on outside free agents which is only around 2/13M. Remember, they gave up a 1st round pick to bring in Wood, only for Kidd to bring him off the bench and not play him nearly enough.

So while things may not be at that point at this moment in time, you can understand how one day Luka might look at his situation in Dallas and have a change of heart if this team is stuck in NBA purgatory with no real way of improving the roster around Luka. It's why building a contender is so fucking hard. One bad decision or one bad trade can have big time effects on how your most important piece feels about his situation.

Again, I wouldn't say Mavs fans should truly be in panic mode just yet. If Wood stays, there are ways to improve this roster through trades/value signings that fill a need. In 2024 and 2025 they'll still have Luka tied up and will have money to actually spend again. But they have made that transition into "win now" mode. The West is wide open, they made the WCF last year, Luka is an MVP candidate, now is the time to continue your progression and show Luka that he can win at a high level while staying in Dallas.

If not, well then things could turn south real quick.