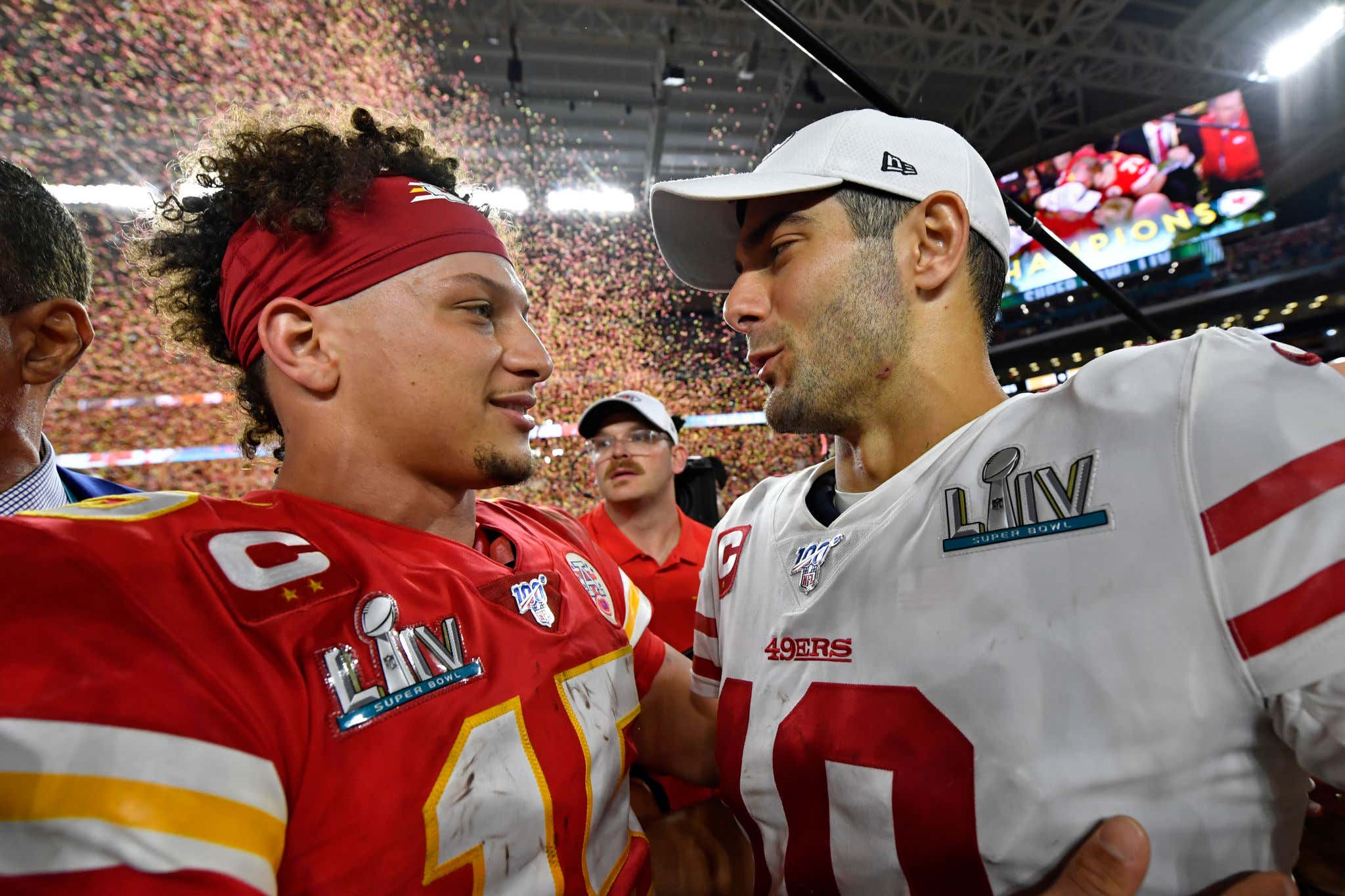 Before even outlining the latest NFL power rankings, I went down quite the rabbit hole that's reflected in the last several words of the headline. In the spirit of Thanksgiving, I thought that it'd be appropriate to highlight just how lucky some NFL fan bases are if they've made it through the season with one quarterback.

Almost 16% of the league is on the brink of making a change at quarterback in Week 12 alone:

One of the teams mentioned at the top, the Washington Commanders, were forced to move off injured QB Carson Wentz for spunky backup Taylor Heinicke. They suddenly find themselves on a 5-1 run, right in the thick of the playoff hunt. Weird how this sport works, isn't it?

Shall I keep going?

The to-date sixth-seeded Patriots have seesawed between Mac Jones and Bailey Zappe. For whatever reason, Pittsburgh decided to start Mitch Trubisky at the dawn of the season before moving to rookie Kenny Pickett. The Colts decided to hire an ex-player as a coach and reneged on their decision to bench Matt Ryan for hapless youngster Sam Ehlinger. New Orleans' Jameis Winston lost his job to Andy Dalton because of injury as well.

Once this holiday week comes and goes, we might have as many as 15 teams who've changed QBs.

OK this blog tends to be long enough each week. In an effort to make these write-ups more succinct, I've decided to create some custom tiers to aid the process.

PS: Be sure to jump on this awesome Barstool Sportsbook promo!

The Zero Point Zero Percent Chance At The Playoffs Tier

While not mathematically true per se, let's modify the famous Anchorman line to, "99% of the time it works…every time."

Houston is staying somewhat competitive despite a bottom-barrel roster. I doubt Lovie Smith benching Davis Mills, the first draft pick of this Texans front office, will do him any favors to keep his job. Regime change likely incoming. Soon enough the Panthers will be in the market for a new QB-head coach combo themselves. Little to say about the Rams beyond they're officially one of the worst defending Super Bowl champs ever.

Mike Tomlin is on his way to his first losing season in Pittsburgh. The Bears are fucked without Justin Fields and it actually behooves them not to play him at this point. Denver's elite defense keeps being let down by Russell Wilson and Nathaniel Hackett. Finally, I picked the Raiders to make the playoffs before the season. They're now 3-7, having lost thrice while failing to hold 17-point leads. Those blown opportunities are too difficult to overcome this late in the game.

The Spunky But Unlikable Tier

I expect Kyler Murray to return at quarterback for Arizona, who has too many pass-catching weapons to count out entirely — their penchant for late-season collapses notwithstanding. Kyler's attitude sucks, and the Cardinals are just full of uninspiring leaders at the top of their entire operation.

Speaking of diva-ish QB behavior, Aaron Rodgers' tired act is causing the Cheeseheads to stink in Green Bay. When you're as talented as Rodgers is and no one outside of Packers fans are really rooting for you to turn things around, you know something's wrong. However, as long as he's healthy, we can't say Green Bay has zero chance of a late-season rally. That flickering, flimsy flame of hope may be extinguished Sunday night in Philadelphia.

Nobody expected much from the Falcons in 2022 and frankly they're just gonna ruin shit if they somehow beat out the Bucs for the NFC South crown. Please do not sign me up for Marcus Mariota quarterbacking in the playoffs.

The Spunky And Likable Tier

I'm fascinated to see how the Jaguars look coming off their bye and hosting the Ravens this Sunday. Jacksonville seems so much better than its 3-7 record. I'd love to see Trevor Lawrence author a 6-1 or 5-2 finish. Their losses are all by one possession except for a 27-17 defeat to the Chiefs.

Oh and the Lions! Their defense looks a lot better of late. I'm stunned Jared Goff played well enough for Detroit to get a road win over the Giants in Week 11. Let's see if Goff keeps the mojo going on Thanksgiving at home versus the Bills.

Pretty easy here. The Chargers are being held back by their coaching staff, while the Jets have a seemingly immature ingrate at the most important position in Zach Wilson. I don't trust Brandon Staley to execute his defense or game management skills well enough, nor do I believe in Bolts OC Joe Lombardi to position Justin Herbert ideally for success.

Wilson is being benched in Week 12 following an atrocious performance in Gang Green's latest loss to New England. Mike White SZN, fire up!!

Sorry to break it to you folks who are allegiant to these teams, but this tier's title is a kind way of saying y'all are a bunch of pretenders. Apologies and condolences. I just don't trust the G-Men to hold up down the stretch with zero receiving help for already-limited QB Daniel Jones. Nor do I fully buy into Commanders field general Taylor Heinicke and his 81.8 passer rating.

The Seahawks are leaning on a bunch of rookies and a one-of-one, historic season from Geno Smith. Either of those two things will probably give, and it's hard to see a path to the playoffs for Seattle since San Francisco has now taken over the NFC West lead.

As our resident stat man Jeffro underscored over the past couple weeks, the Minnesota Vikings' record is not reflective of how good of a team they are. They just got WORKED 40-3 by the Cowboys. Any major statistical category you look at, there ain't much to like in Minnesota. Well, other than Justin Jefferson, who transcends the mundane.

The Can't Count Them Out Tier

Bill Belichick and Tom Brady. Pulled apart but reunited here. You'll notice the Patriots are just ahead of their impending Thanksgiving opponent, the Vikings. I think that'll prove out on Thursday, as The Hoodie gets the better of Prime-Time Kirk Cousins.

TB12 led the Bucs to two gritty wins before the bye. That rally against the Rams served as a springboard for Tampa Bay's trip to Germany, where they played their most complete game of the year in a 27-13 victory over the Seahawks. With a bye to rest up, self-scout and temper some of the chaos that's surrounded Brady, it feels like the Bucs are poised for a strong playoff push.

When these two teams share a tier, I can't not plug a Jerry Thornton blog.

Bet against the Titans at your own peril. Mike Vrabel is pretty inarguably a top-five NFL head coach, the defense is legit and Derrick Henry is hurtling toward another rushing title.

I don't like the weapons around Lamar Jackson outside of Mark Andrews. The closer we get to the end of the season, the louder questions will become about his contract situation. I don't know if any player or organization is under more pressure than Jackson and Baltimore the rest of the way with that ominous, overcast backdrop.

Did everyone crown the Bills too early? Sure seems like it. On the other hand, maybe things would be different had Josh Allen not banged up his throwing elbow. Something is a little off with this team in any event.

Even as a big Bengals guy, I'm not totally comfortable putting them in the uppermost tier just yet. Too much inconsistency throughout the season. A formidable opponent in Tennessee looms this weekend, too. Should Cincinnati improve to 7-4 and beat a team with a current winning record for the first time since Week 4, then I'll give them a bump up. Helps that Ja'Marr Chase is coming back.

Philly's recent struggles are of some concern. Then again, no team is going to be on a continuous upward trajectory the whole season. They're still 9-1, on track for the No. 1 seed, and Jalen Hurts catalyzed a fourth-quarter comeback in Indy. I'm just waiting to see if this is inevitable adversity during a long season or if it's a sign of larger issues.

Feels like Mike McDaniel and Tua Tagovailoa are constantly a step ahead of opposing defenses. With how well the Dolphins are playing offensively, they're never out of any game. Their rushing attack has picked up big time recently, and Bradley Chubb should be even more of a factor on defense coming off the bye.

Although I just spoke of how overrated the Vikings were, make no mistake about it: Dallas' 40-3 blowout in Minnesota was one of the most impressive wins of the 2022 campaign. Micah Parsons is a game-wrecker to lead a dynamic Cowboys D, and tailback Tony Pollard's emergence is taking pressure off Dak Prescott to carry the offense. Plus, the 'Boys may soon land Odell Beckham Jr. to give their receiving corps a spark.

Were I to guess at this very moment who'd square off on Super Bowl Sunday, I'd have to go with the 49ers and Chiefs. Imagine a rematch of Super Bowl LIV with Jimmy Garoppolo playing for the right to stay in San Francisco against the very opponent and surefire superstar counterpart Patrick Mahomes who fundamentally altered his football destiny. SO SPICY.