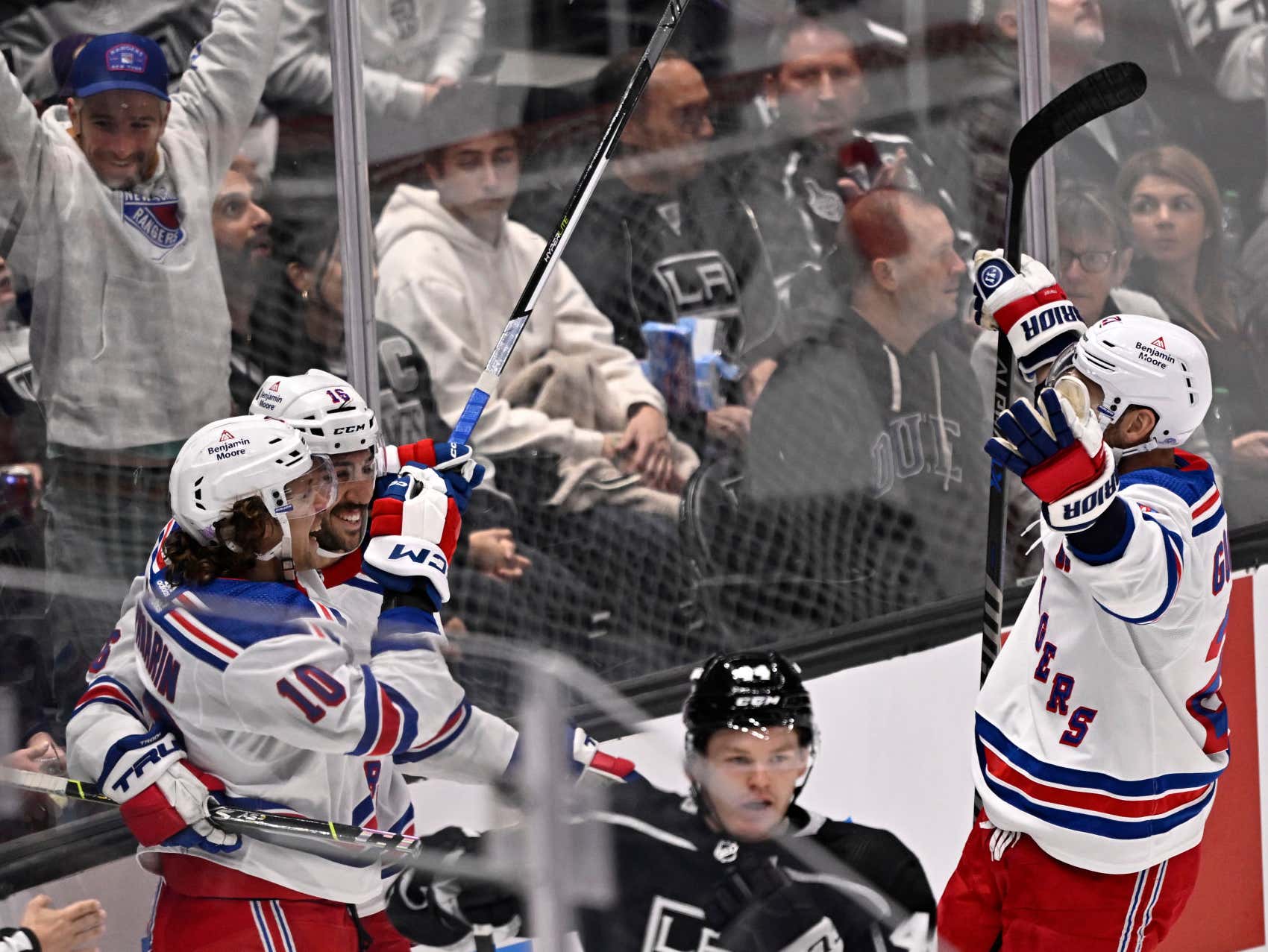 Last night's game in LA kicked off with about as poor a 20-minute effort as we've seen from the Rangers so far this season. The Kings got on the board just 35 seconds in & took a 2-0 lead just a few minutes later while their east coast guests couldn't muster any semblance of an answer. Not ideal for a Blueshirts squad sitting 0-4-2 when trailing after one, a far cry from the comeback kids who finished last season with the second-most W's facing a first intermission deficit.

It wasn't domination. They've still got work to do to find their collective A-game. But New York came out for the second period a totally different squad. The intensity & urgency finally showed up. They were winning board battles. Disrupting LA's zone exit attempts with a pestering forecheck. Wreaking havoc in front of the net. A little dash of overdue puck luck to boot and the Rangers found themselves rekindling last year's "No Quit" persona by taking a 3-2 lead into the final frame. Then just when the home team thought they stole the momentum back with a third period equalizer, the dynamic duo of Zibanejad & Kreider connected on a set play to take the lead for good less than a minute after.

It might not seem like much to those outside the Blueshirts fanbase but this was a monster win. Not just for the two points or finally putting together consecutive victories this month, but for the resurgence of the squad who was an utter pain in the ass to put away game in & game out a year ago. The Rangers have played quality hockey for most of the season without the results to prove it. When that happens it's easy for a team to lose their swagger. Last night may very well serve as the turning point that catapults the boys back into the league's elite.

And honestly, they've quietly been on their way for about the last month. Since a brutal 0-2-2 stretch in October the Rangers are 7-3-2. Besides the white-hot Devils and Bruins only the Isles & Leafs have more points in the East over that span - thanks only to both having played an extra game. Shesterkin is rounding into Vezina form of late, posting a 4-0-1 record with 1.99/.931 peripherals over his last five starts. Adam Fox seems headed for another Norris ballot with a 9-game point streak (4G 10A) putting him atop the Rangers scoring list & third among all blueliners. Kreider (7G 6A) and Zibanejad (6G 8A) have been awesome over their last 12 while Filip Chytil has racked up 2 goals & 5 apples in his 8 post-injury contests despite ever-changing bottom-six linemates.

The best part? Artemi Panarin has been flat out terrible yet the wins are still coming. Guy hasn't scored a goal since before Halloween & is easily having his worst month as a Ranger with just 6 assists in 10 tilts. Pretty sure he hasn't had a month at under a point-per-game pace since he's been here. Panarin is obviously one of the game's absolute best playmakers but an inexplicably high aversion to shooting the puck has him looking awfully predictable of late. That's not gonna last though and once he rejoins the party we'll finally see the juggernaut these Blueshirts can be when they've got three lines doing damage. Don't be surprised to see the Breadman snap out of it tonight against the hapless Ducks before they skate 5 of their next 6 at MSG.

Sounds like the perfect time for the Rangers to get hot.