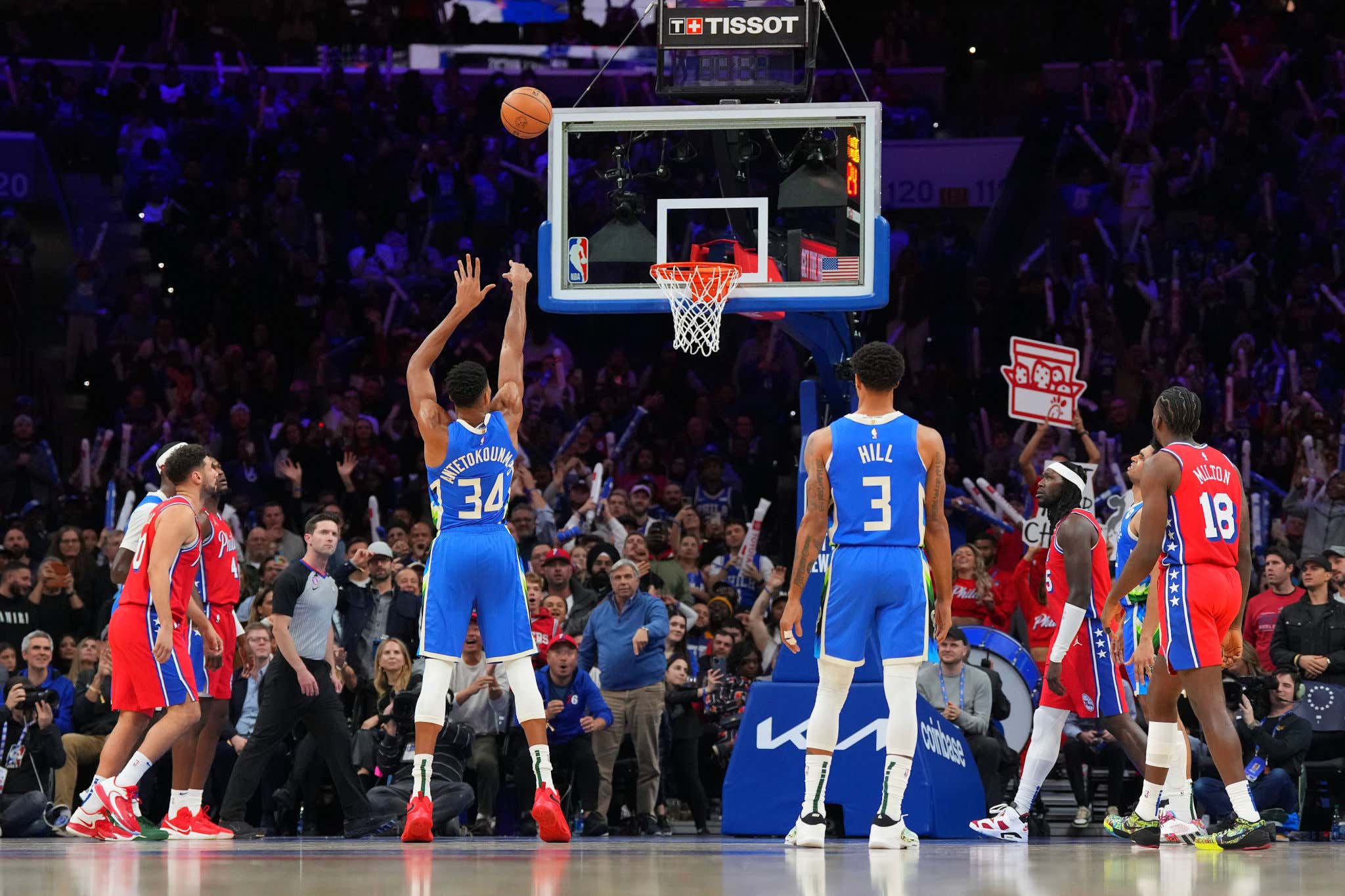 The Bucks and Sixers have an interesting relationship. For a while there, the Bucks owned the matchup winning 6 straight from February 2020 to November 2021. Since last season though, the Sixers have punched back, winning 2 of the last 4. These teams do seem to always play close games, with 3 of the last 4 being decided by 3 points of less.

Tonight, despite Tyrese Maxey getting hurt after he looked great early (X-Rays were negative), Joel Embiid outplayed Giannis in a big way

and the Sixers pulled out the 110-102 win to move them to 8-7 on the season and the current 9 seed in the East. But hey, they have won 3 in a row. It just sucks that Maxey will probably miss some time given how important he was in terms of filling in for James Harden who we know is already hurt.

While Embiid put on his MVP caliber performance to drag his team to victory, Giannis on the other end was choking big time from the FT line. I'm not talking about missing 2 or 3. I'm talking a 4-15 performance from the charity stripe. In a game you lost by 8, that's tough. Something is up for him at the line at the point considering this brutal showing comes on the back of the 4-11 performance against the Cavs. This is a guy that went 17-19 from the FT line to win. a goddamn title, so it's not as if he can't shoot FTs. Unfortuantely for the Bucks, that was the case tonight and you could make the case it played a pretty large role in the outcome.

Which brings me to the postgame. If there's one thing we know about Giannis it's that he's going to put in the extra work to fix a weakness in his game. Like players who struggle from the line in a game often do, Giannis went back out onto the floor to get some shots up.

What a move by that Sixers employee. Nothing but respect for that move. Oh Giannis, you want to practice your FTs? Sure, let me just move this ladder right in your way on multiple occasions. That's some elite postgame mental warfare. Pretty rude of Giannis to act like that if we're being honest. It's not that guy or the ladder's fault that you went 4-15 from the line to choke the game. They're just trying to do their job. You had 48 minutes to do yours and make FTs. Maybe say please? Or a "hey sorry to bother you, but do you mind if I get some shots up right here?" Instead, he went with the asshole route.

To then step up to the line and miss all your FTs is an even tougher look. I guess maybe he does need the practice and maybe that's why he was so upset. I'm sure there will be your usual Bucks fans who spend the rest of tonight defending these actions. Probably saying that the workers shouldn't be there in the first place or some bullshit. Fuck that. Make your FTs during the game and there's no issue here.

To take it out on some hard working people and a perfectly nice ladder is uncalled for. What if that ladder breaks? Those are expensive. When is the last time you ever had to go buy a ladder? You can't skimp out on those things and they'll run you a pretty penny.