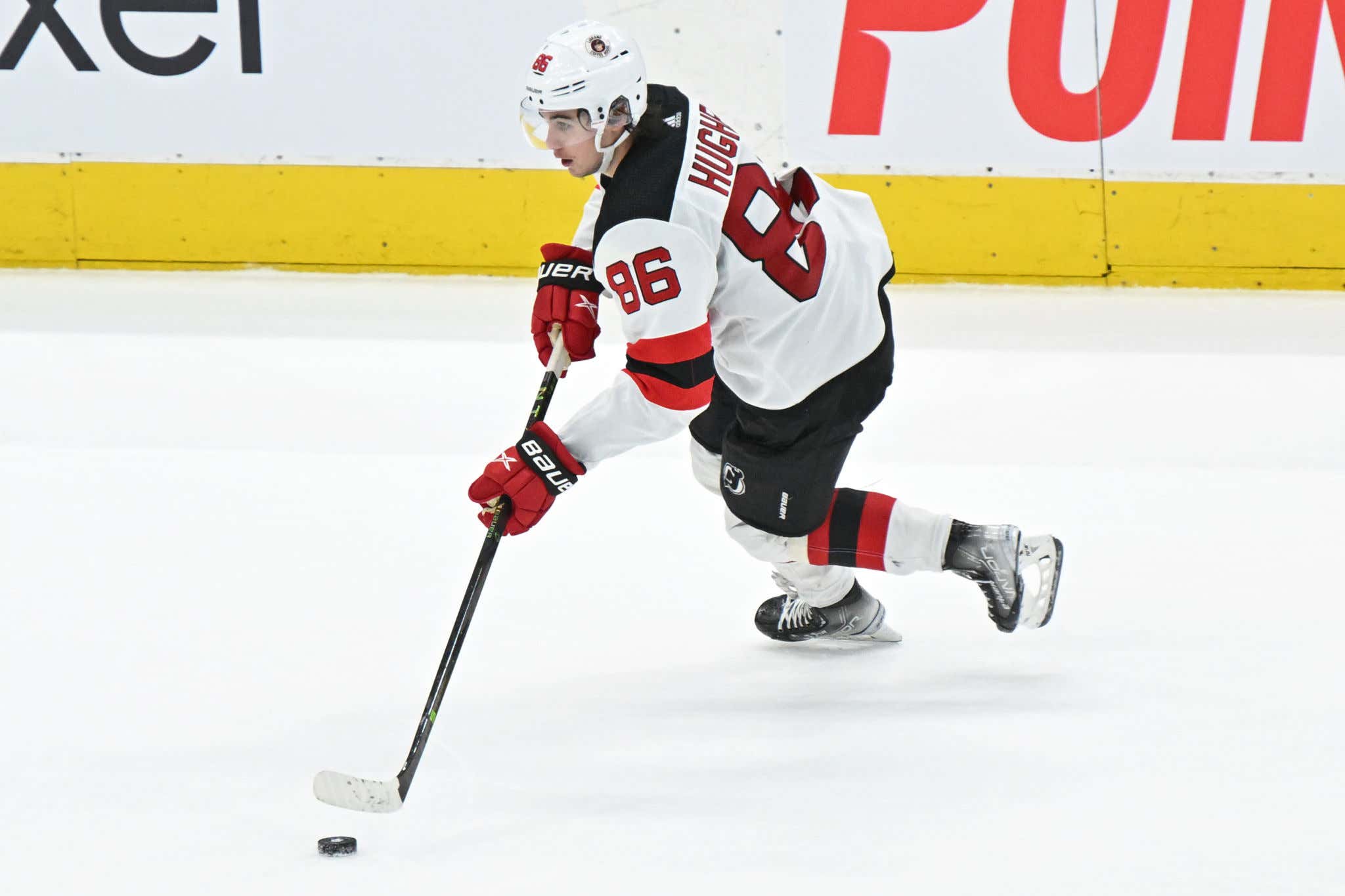 It has been a long time since the New Jersey Devils were good or entertaining, but this year's team has begun to put it all together and changed everything. Since making the Stanley Cup Final in 2012, the Devils have been consistently among the worst teams in the NHL, making one brief postseason appearance in 2018. That 2018 playoff appearance was an aberration and resulted in a quick exit, losing in five games to the Tampa Bay Lightning. In the four years since, the Devils have been among the worst teams in the NHL, as they were in 2017. The Devils' losing had resulted in several high draft picks, including 20,17, when they selected Nico Hischier, and 2019 when they selected Jack Hughes with the number one overall pick. Hischier and Hughes had been the lone bright spots in recent years, but the whole team is now excelling and winning.

It was natural to expect the Devils to have some down years when Martin Brodeur retired. The Devils had a long sustained period of success with Lou Lamoriello running the team. In his first season, the Devils made the playoffs for the first time, reaching Game 7 of the Wales Conference Finals. The following season, they missed the playoffs but soon became consistent contenders, as drafting players like Scott Niedermayer and Martin Brodeur helped build a nucleus that would bring three Stanley Cups to New Jersey.  Drafting Niedermayer with the third pick in the 1991 draft was thanks to a shrewd deal that sent Tom Kervers to Toronto in 1991. The Devils were smart; they had good coaches and a style and brand of hockey that made them the team everyone hated to face, especially after they got captain Scott Stevens as free agency compensation for losing Brendan Shanahan to the St. Louis Blues in 1992. The Devils were nearly a dynasty, missing the playoffs just three times between 1988-2012. They won three Stanley Cups and appeared in the Stanley Cup Final five times, narrowly missing a chance to win three cups in four years when they lost Game 7 in 2001 to the Colorado Avalanche.

After the departure of Lou Lamoriello, the Devils hired Ray Shero, who helped rebuild the Penguins into a Stanley Cup champion. The final years with Lou Lamoriello in charge were not great, as he missed on nearly every draft pick after 2003. With few prospects, Shero tried for a quick fix and landed Taylor Hall in a trade for Adam Larsson in 2016. The move paid off when Hall won the Hart Trophy in 2018, but Hall was injured the following season and soon grew unhappy and was traded to the Arizona Coyotes. Looking for a similar boost, the Devils acquired P.K. Subban in 2019, but the former Norris Trophy winner had lost his speed and became a burden on the Devils' roster as a young team became directionless under coach John Hynes.

The 2019/20 season was nothing short of a disaster for the Devils, John Hynes was fired along with Ray Shero, and the team had to again pick up the pieces as Jack Hughes, perhaps playing above his head, struggled in his rookie season. Over the next two years, with Tom Fitzgerald as General Manager, the Devils continued to lose. He hired Lindy Ruff, but the Devils struggled, especially on the power play in the next two seasons. Ruff was given a third season, but the coaching staff was overhauled entering this season with Jack Adams finalist Andrew Brunett, becoming like the sword of Damocles, replacing Mark Recchi. At the same time, former Vegas assistant Ryan McGill was hired to address the defense.

The Devils had a rough start, as they were booed off the ice in the home opener, as the crowd chanted "Fire Lindy." They had lost their first two games, each 5-2. However, since that game, it has been good for the Devils as they have won 14 of their next 15 games, including 11 straight, which is tied for the second-longest winning streak in team history.  The most thrilling of these wins was on November 3rd, when they stunned the Oilers in Edmonton 4-3, scoring two goals in seven seconds, late in the third period.

Providing an early spark for the Devils was Jesper Bratt, who had a point in each of the team's first 11 games, setting a new franchise record. Bratt is leading the Devils in scoring with 22 points. Drafted in the sixth round in 2014, he was a player who was slow to develop but had a promising season in 2022, with 26 goals and 47 assists. Bratt's development into a consistent score has helped the Devils' offense become a machine, as they now have multiple playmakers instead of needing Jack Hughes and Nico Hischier to carry the load. Hughes, who had a slow start, has been on fire in recent games, with seven goals and ten assists on the season, while Nico Hischier is off to the best start of his career with a team-high nine goals.

A significant change for the Devils has been on defense, which has improved considerably with the acquisition of John Marino from the Penguins. The Devils got Marino in a trade for Ty Smith, who was picked in the 2018 draft with the 17th pick. Smith was a major disappointment for the Devils, as he struggled on defense, especially with sloppy play and turnovers. After a promising rookie season in 2021, he was a disaster in 2022, with a -26. The Devils traded Smith along with a third-round draft pick to receive Marino, who has been tremendous, especially on the penalty kill. Ty Smith, meanwhile, is playing in the AHL after failing to make the Penguins roster in training camp.  John Marino is an incredible +10 with the Devils and has been their best player on special teams. The Devils' defense has been tremendous all season. Dougie Hamilton, who suffered a broken jaw last season and missed two months, has been a strong, healthy leader with five goals and nine assists, while Jonas Siegenthaler and Ryan Graves have each become big bodies preventing those rebound shots that often killed the Devils over the past few seasons.

Finding a good goalie has been difficult for the Devils since Martin Brodeur's career ended. Corey Schneider showed some early promise, but injuries ended his days with the Devils since the Devils have tried anything and everything. Corey Crawford, who won two cups for the Blackhawks, signed in 2020 but arrived at training camp and decided to retire. Mackenzie Blackwood, like Ty Smith, had a promising rookie season but struggled in 2022, dealing with injuries. To help, the Devils signed Jonathan Bernier, who suffered a hip injury after playing well early last season and has not played since. The Devils again went on the market and landed Vitek Vanecek for a pair of draft picks from the Capitals. Vanecek has been marvelous for the Devils, with a .916 save percentage, as the Devils have won nine of his ten starts. Vanecek's best performance was on October 28th, when he made 24 saves in a 1-0 win over the reigning Stanley Cup Champion Avalanche.

Last season, the Devils had one of the worst power plays in the NHL. They were hesitant while passing up good shots and often gave away the puck leading to short-handed goals. It often felt like the Devils should decline penalties because of how it seemed to slow them down as they waited for the perfect shot and a goal that was so perfect a heavenly choir would sing "Howl." Now the Devils are taking shots and getting goals, as their power play is ranked among the best, with Hughes, Hischeir, and Bratt leading the way. In their overtime win over the Senators last week, it was Hischeir who scored off a face-off as they had gotten a power play with under 30 seconds left in sudden death. It's been quick and decisive as Andrew Brunett has remade the Devils' attack.

Eric Haula, acquired for Pavel Zacha, had yet to score a goal, and the frustration is evident. Still, he has been contributing in other ways, has been strong on the penalty kill, and has shown skill as a defensive forward reminiscent of John Madden from the Devils' glory days. Amazingly the Devils' turnaround has been without Ondrej Palat, who has played just six games after suffering a groin injury. Palat was a big part of Tampa's two Stanley Cup wins and was the Devils' big off-season signing. Palat is expected to return around Christmas, and his return should only make the Devils stronger, as he was playing well before the injury.

The Devils can't continue this pace, but the start has sparked the fan base. The last two games at the Prudential  Center had an energy that had not been felt since the 2012 playoff run, with near sellout crowds. Fans even chanted "Sorry Lindy" as the team is winning, and is fun to watch. They are also still one of the youngest teams in the NHL, with most of the team being 25 younger, including Jack Hughes, who is only 21.