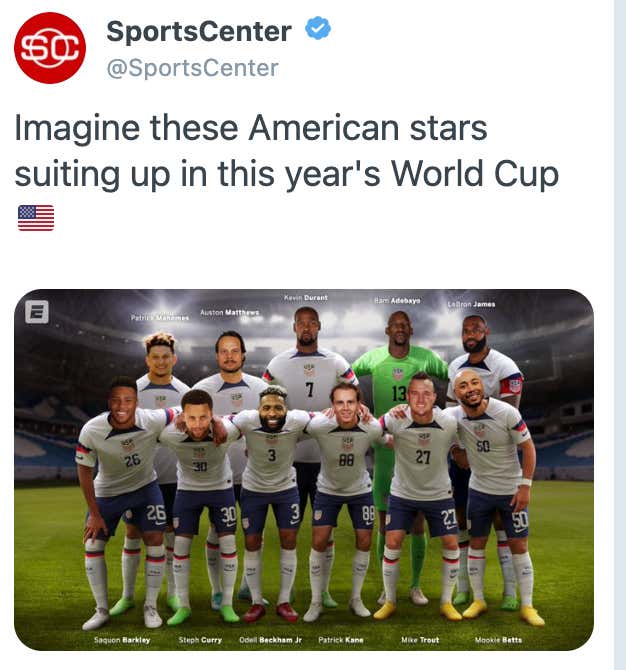 Simply amazing, all the way around. This is an all-time tweet. It's one thing to tweet out the dumb 'what if we had our best athletes play soccer' since that's somehow the only time we say that. SportsCenter came out with a full on graphic and starting XI.

You want to know what will happeN?

We'd get our ass kicked. These guys fucking stink at soccer. Odell is coming off an ACL injury, not even sure if he can play. Saquon? No chance those thighs know how to dribble. Mike Trout? Might be the worst soccer player I can imagine. Mahomes quite literally can't use his hands, does us no good. I'm trying to imagine how this XI would line up, I think it'd be:

Bam in goal. Saquon, Mookie, Durant, Odell as our back 4. Trout, Kane and Mahomes in the middle. LeBron, Matthews and Steph up top. They'd lose a smooth 21-0 to Wales on Monday.

But back to the tweet. This is up there with Bleacher Report:

I legit laugh out loud every time I see the cast of Modern Family on there. Gotta make sure Phil Dunphy gets his World Cup shine. Just perfect all the way around.

This is why Twitter can't die though. We need moments like this. A snowy, dreary Friday morning. Sure we have day time hoops and that's awesome, but it's still a whatever Friday. That's until Twitter gets hit with that tweet. I saw everyone from Feits to Clem to accounts everywhere talking about it. Prime example of why this app can be so great.

I might need to come up with my own graphic and start asking - imagine these stars suiting up for the Super Bowl and it's a bunch of soccer players, hockey guys and basketball players. Imagine if Christian Pulisic was suiting up for the NBA Finals! Imagine if Gio Reyna was the starting pitcher in the World Series! You see how dumb this is? Perfection.