There was a whole lot of talk on Twitter last night that Twitter itself was going to, "shut down". It was an interesting night on the app. People handled the news in different ways. Some people got their jokes off, others retweeted their favorite old tweets, some people got angry, while others (me) missed the whole thing because they found this show on Hulu called Escaping Polygamy and were glued to the television (great show, highly recommend).

I'm not sure where all this doomsday talk stemmed from, as Elon Musk assured us that Twitter usage was at an all-time high. But for some reason, people were questioning whether or not the app would still be working in the morning. Is it because Twitter HQ shut down? Is it because every day a new Twitter employee who is vital to the company is laid off? Is it because every single thing you've heard about Twitter since Elon Musk took over has made Twitter seem like a complete shit show of a company? It's hard to say.

There has undoubtedly been some growing pains since Elon Musk purchased the company. But sometimes, in order to build something beautiful, you need to completely ruin it first. Sometimes, the best thing for a company is to fire half of its entire workforce, with no concrete plans to backfill any of the positions. Even if it temporarily creates an environment where you have to lock the entirety of your remaining staff out of the building because you're worried they will sabotage the company from the inside.

#RIPTwitter is still trending this morning. But guess where it's trending? It's trending on Twitter. Still here, bitch. Elon Musk did it again. Elon Wusk.

But let me be the first to tell you, there is no need to worry. Elon Musk knows exactly what he is doing. This is a man who will have humans living on Mars by 2029. A man who is going to build a hyperloop tunnel that will transport people at 760 mph. I think he'll be able to run the "bird app" just fine.

I will concede, that on the surface, Twitter appears to be having some problems. But problems are like washing machines. They twist us, spin us, and knock us around. But in the end we come out cleaner and brighter than ever before.

Elon Musk isn't the problem. He's the solution. Do you know what the problem really is? It's us. It's all of us. Think about it. Where is all of this negative news coming from? It's coming from us. Negativity breeds negativity. At some point, and I don't know when this happened, Twitter turned into a place for negativity. A place where people bring their complaints and air their grievances. A place where civilians go to do things like argue, and spread cynicism. What the FUCK is that about?

I remember the good old days when our tweets had 140 characters and we would all belly laugh Shaq's relatable tweets. 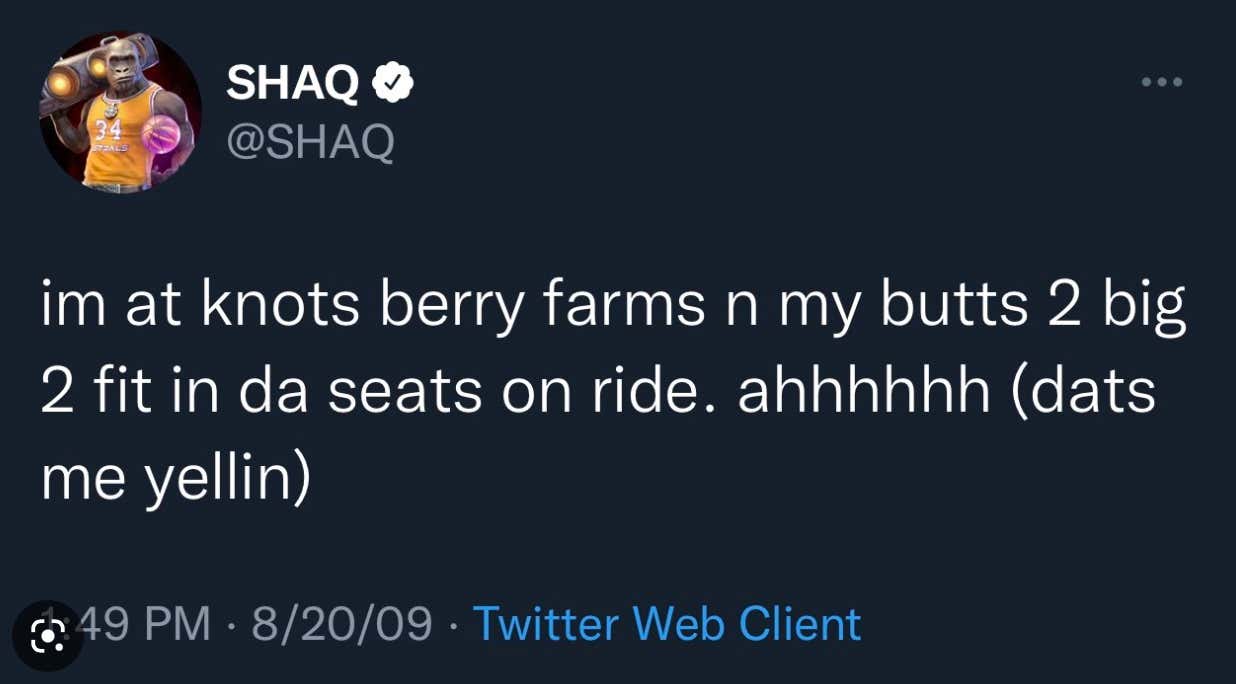 I long for those days. But I fear that place no longer exists. Twitter has become hostile. And some reason, all of this hostility is being directed at our Chief Twit himself, Elon Reeve Musk. I don't like it one bit. Why are we like this? First and foremost, Elon Musk bought Twitter as a bit. But secondly, he bought Twitter so he could make it a better place for us, the user. His intentions are nothing but pure. Why must we throw stones?

Elon Musk is the brightest young mind of our generation. He deserves our respect. But that's not what we give him. It's always, "You're so lame, Elon!", or "Stick to rockets, Elon!"

I have an idea. If we want Twitter to stick around, and truly become a better place, how about we show Elon Musk some support. How about we tweet him words of encouragement, instead of sarcastic quips about how he's "running his $44 billion dollar company into the ground".

Maybe if we rallied together in support of Elon, Twitter would be in a better place. Maybe if we took the time to listen to his ideas, we would understand where he's coming from, and realize that all of his ideas are genius. Maybe if we laughed at his memes, it would put him in a better head space. But no, that will never happen, because modern day Twitter is a cess pool of bad vibes.

How about instead of sending Elon Musk our criticism, we send him ideas and positivity. Let's rally around Elon. Let's hype him up, and cheer him on like our favorite sports team. Let's blindly listen to everything he says, and trust that everything he does is for the betterment of Twitter mankind. Let's laugh at his jokes.

If you have any constructive ideas or positive affirmations you would like to send Elon, please send them my way. I will make sure they get across his desk. My boss has a direct line to him.

You're doing just fine, Elon. I know it's hard. I know people can be mean, but I see you. I see you trying your best. I see your relatable posts, and witty replies. Just keep grinding. You got the vision. I trust you with me life