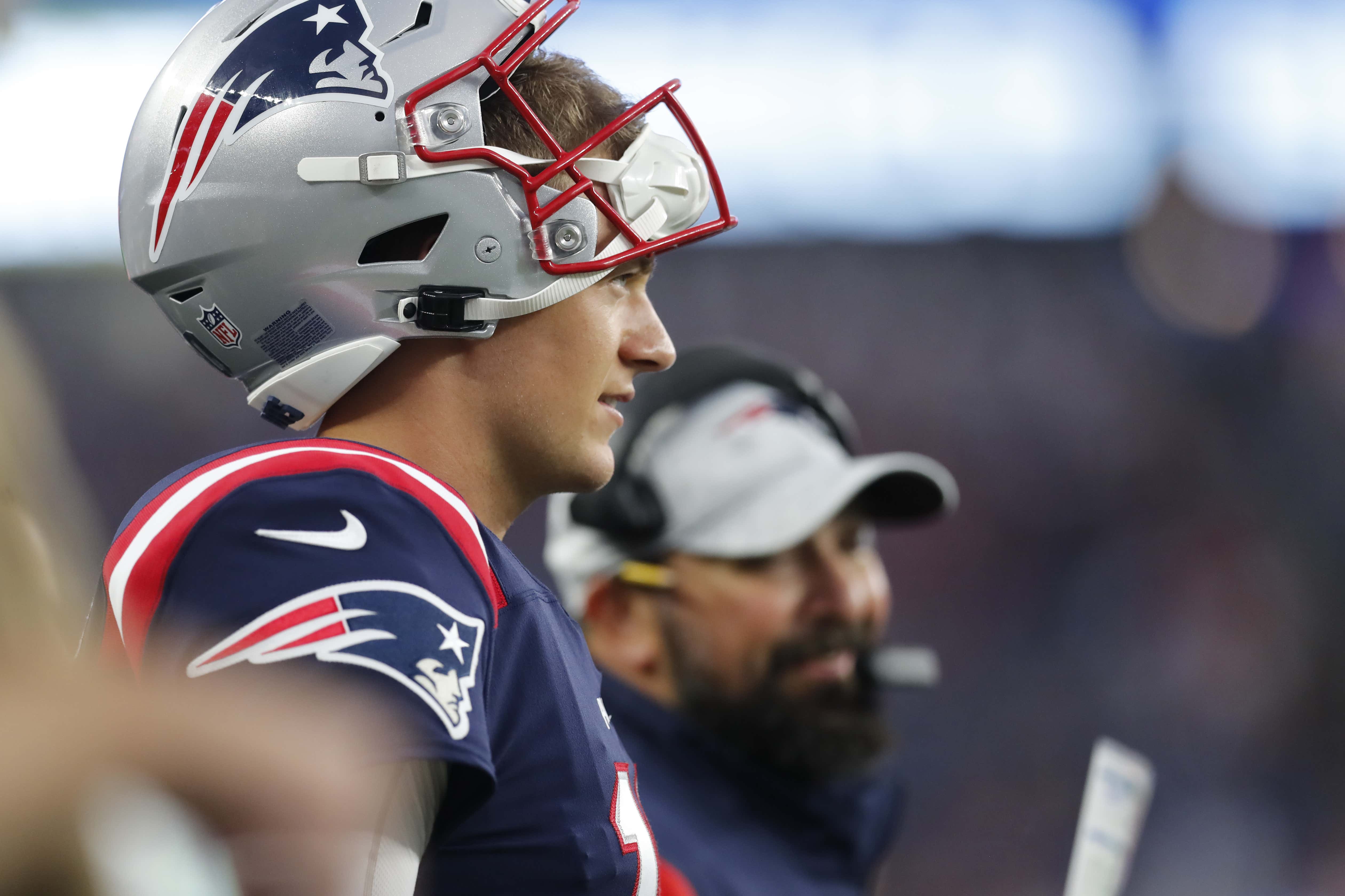 Stop me if you've heard this before, but the Patriots problems on offense this year are many and varied. On second thought, don't bother. I'm going to keep going, regardless.

More than halfway through the season, there's no denying the reality that the change to a new system was a failure. That the result of the experiment to hand the Waffle House menu playsheet to Matt Patricia has been … well, mixed so far. And that Mac Jones has regressed since being the best of an elite rookie quarterback class.

On that last point, here's a quick measurement of how much he's stepped back since last year. In 2021, he was 15th in the league in TD%, at 4.2, and had the 13th highest INT%, at 2.5. This season, his TD% of 2.4 is 32nd, and his INT% is the league's worst at 4.2. There are a lot of other numbers that reflect his decline year-to-year, but none tell the story like the fact he's scoring a lot less and turning it over a lot more. I don't mean to talk over the heads of readers who haven't been the assistant defensive coach on a JV youth football team the way I have, but the technical term we master-level experts use to describe this dynamic is, "Somethin's up."

Sorry for the wonky jargon. But one of the things that is most definitely up is something that's been talked about since the Colts game, and that is the Patriots tipping plays.

Which Belichick has admitted to. "We definitely want to prevent that," he said. "I thought that there were two or three plays for sure that [linebacker Shaquille] Leonard really got a big jump on and stopped us basically on those plays." And expanded on that answer to admit it's happened before. "[CJ] Mosley got a couple of those a couple of weeks ago in the Jets game. It almost looked like he heard the play in the huddle, he was on it so fast. Leonard had a couple like that, too. So, whether it was something we were giving away or something that he anticipated based on whatever the keys were that he might have picked up, we certainly want to try to prevent that."

The hard part for us regular, ordinary, Joe and Jane Sixpacks struggling to get by in post-apocalyptic America is figuring out what those tells are. What exactly is the Teddy KGB Oreo:

… that's had the likes of Leonard and Mosley going all in on the pot instead of falling for the bluffs?

Fortunately, a couple of film studies guys from The Atlantic, Chad Graff and Ted Nguyen, have the time and the inclination to break it down for us regular folk:

Source - Those might just be good reads or good plays by good linebackers. Or it could speak to the lack of creativity and obvious trends in this Patricia-led offense. Beyond that, there’s a lack of proper spacing on passing patterns and apparent disinterest from Patricia to utilize many play-action passes or run-pass options — since the Patriots rank 27th in play-action percentage and 28th in RPO usage.

Given all of that, Ted, what sticks out to you on film with the Patriots’ play calling and play design?

Ted: Watching the film, there are definitely some detectable tendencies in the Patriots’ play calling. In the passing game, you see a lot of the same concepts over and over again. They are dressed up differently, but they run a ton of different variations of sail, mesh and shallow cross.

I'll just quickly interject here to say that, while pretty much everyone knows what mesh and shallow cross are, sail is a 3-levels concept, typically used as a Cover-3 beater, in which the outside vertical receiver runs a Go route to take the deep-third cornerback with him, a corner route is run underneath him, followed by another run to the flat. The quarterback then reads the flat-curl defender's (usually the strong safety) depth to decide whether to attack the intermediate receiver or check down to the flat. Sorry again. Back to the adults in the room:

On the Patriots’ fourth offensive snap of the [Colts] game, they ran a draw play that was blown up in the backfield. Tight end Jonnu Smith’s job was to block linebacker Bobby Okereke (No. 58). The design of the play was to get Okereke to drop or chase the pump fake by Jones, which would buy time for Smith to get to the linebacker. 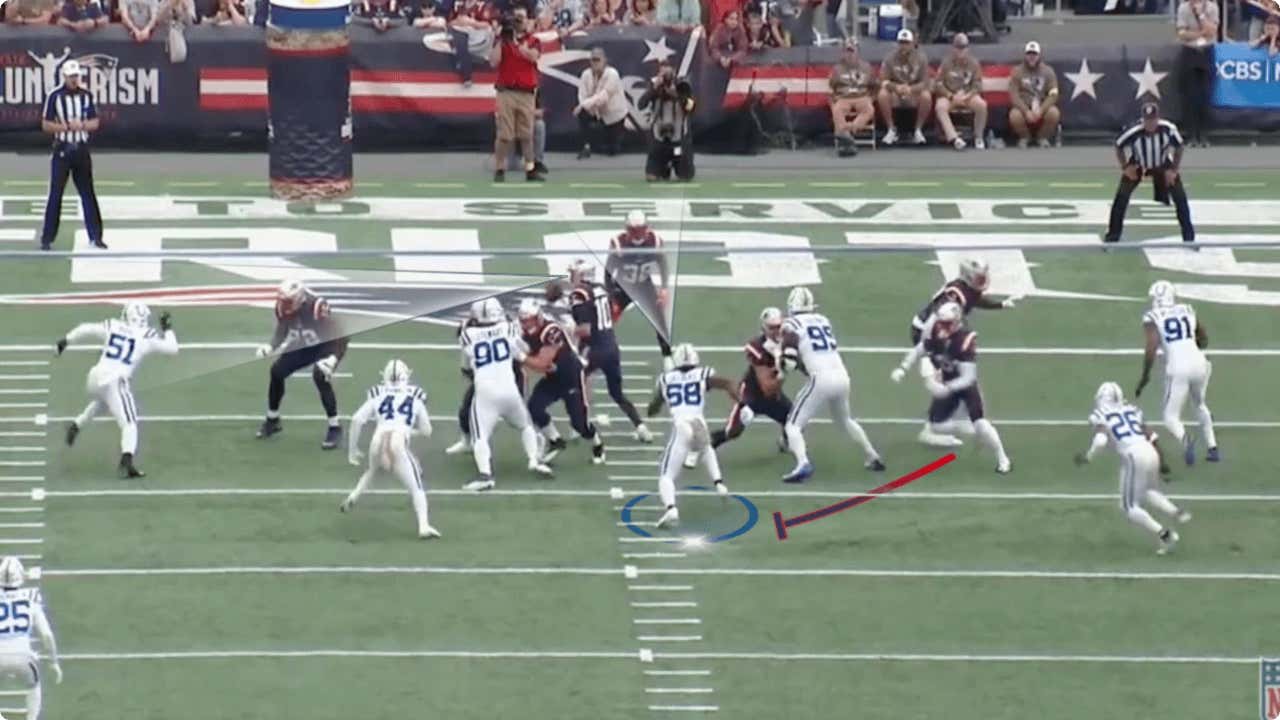 But in the middle of Jones’ pump fake, Okereke saw running back Rhamondre Stevenson’s footwork and read the play. Okereke read this play so fast that it almost looked like a blitz, but the Colts are dead last in the league in first- and second-down blitz rate (5.2 percent), so it’s unlikely that this was one.

Before Smith could get to his block and before Stevenson could make a move, Okereke already had him wrapped up for a 5-yard loss.

I'm especially glad these Atlantic guys mentioned that play in particular. Because I clocked it in real time in my Knee Jerk Reactions to that game:

It just feels systemic at this point, with an unnerving number of negative plays, running backs having to survive a Jackie Chan fight sequence just to get back to the line of scrimmage, and sometimes total breakdowns. For instance, on the second possession, Okereke came clean through the A-gap to meet Stevenson right at the mesh point on a play that looked like (I'm clearly guessing) it was on Jonnu Smith to come across and throw a wham block. He wasn't two steps toward Okereke by the time the linebacker was flossing chunks of Stevenson from between his teeth.

A different way of saying it, but with identical conclusions. Patricia's offense is giving the game away. Through predictable play calling. A lack of disguise. No imagination. Obvious tendencies that show up on film. And veterans like the aforementioned linebackers are able to instantly recognize what the play is before blockers can block them.

You might have thought that as a guy who's won rings as a defensive coordinator by recognizing these very same issues in opposing offenses, Patricia would've been able to self-scout his own scheme and clean this shit up. But nine weeks into his first season in the new role, coaches around the league are spotting these things in ways he hasn't. Yet.

Hopefully this is, not just a wake up call, but all the smoke- and carbon monoxide detectors in the house going off at once to alert the whole organization to the problem. And that they've taken the bye week to resolve them so that we'll see counter plays that take advantage of teams convinced they know exactly what's coming. If not, those numbers from Mac Jones and everyone else are only going to get worse. Here's where it's time Patricia earn those dollars he's still getting paid by Detroit.