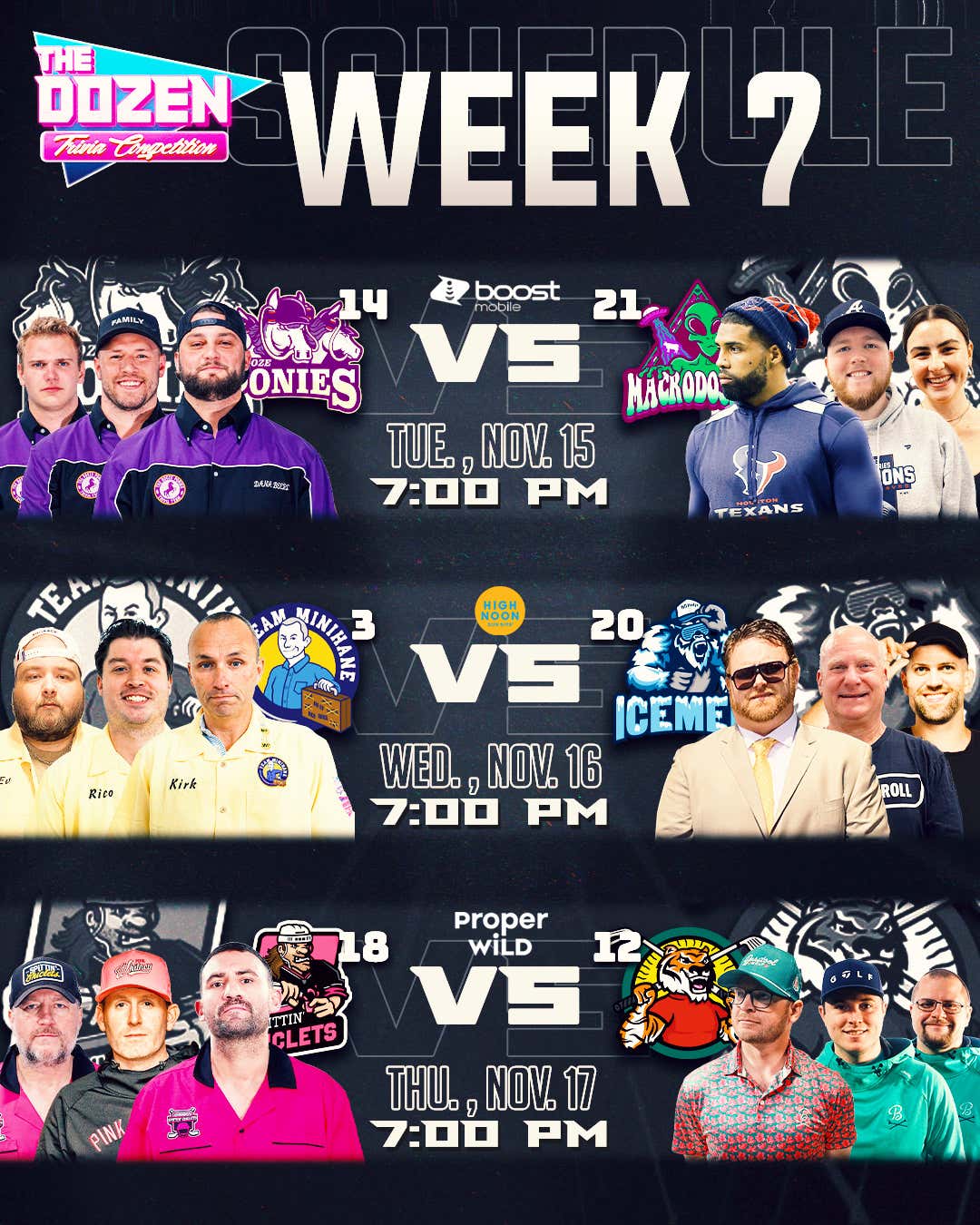 The Dozen Week 7 is upon us, and this week we got former NFL players, former NHL players, PGA Tour 2k23 characters, Stu Feiner, and the league MVP Kirk Minihane all playing in various games. Our correspondent Scoops L'Aguirre has the breakdown…

When Dave Portnoy started Barstool, part of the blueprint was there would eventually be a trivia show/league where NFL players like Will Compton and Arian Foster head up teams and play regular season games against one another. In all seriousness, the Dozen’s growth is surreal to the point where these two teams are not just playing for fun. At 0-1-0, both teams are looking down the barrel of potential relegation/elimination from the league if they lose this week.

The Booze Ponies last game involved a White Sox Dave cheating scandal and them fumbling a two-point lead in the final round after getting their Doubled NFL question stolen. Meanwhile, Macrodosing would have won their last game if Big T had not picked One Tree Hill as their Niche, as Fran’s steal in the category was the difference. Both teams have shown potential, but neither has ever won a game with their 3-person units. It is time to either perform or pack it up.

The positives of the Icemen's debut included them dropping 10 points along with some hilarious moments, ranging from Sterling Optical to Elio requesting Nate to sing their music questions to him. The negatives of their debut were they had 17 points scored against them. Despite the loss, the Icemen went up in the rankings and gained some respect from fans. They will be facing another juggernaut in Team Minihane.

Minihane looks like the best version of themselves following the addition of Big Ev. For once, Kirk is not their leading scorer per game, though expect that to change soon. Kirk is on a mission for an undefeated season and wants to squash everyone in their path. It will be a goliath battle for the Icemen, but if anyone can unnerve Kirk, it is Stu Feiner.

The Chiclets finally make their Season 3 debut. As long as RA plays, the Chiclets are a force, as he was Top 5 in points per game last season. RA singlehandedly picked apart Chicago during their massive tournament upset. Biz is surprisingly one of the best mashup players in the league, and Whit knows how to get in his opponents’ heads. Even though the Chiclets do not play often, their matches are always quality.

Foreplay is the new Team Ziti. While they have yet to win a game, they keep earning fan respect with competitive performances. Watching their game two weeks ago get smashed to pieces by an unfortunate Hulk Hands Big Bang Theory question was brutal.

It will be a fascinating match as the NHL and Golf do not get used often in games, let alone be a strength for both teams. Those are the categories that will define this match-up. 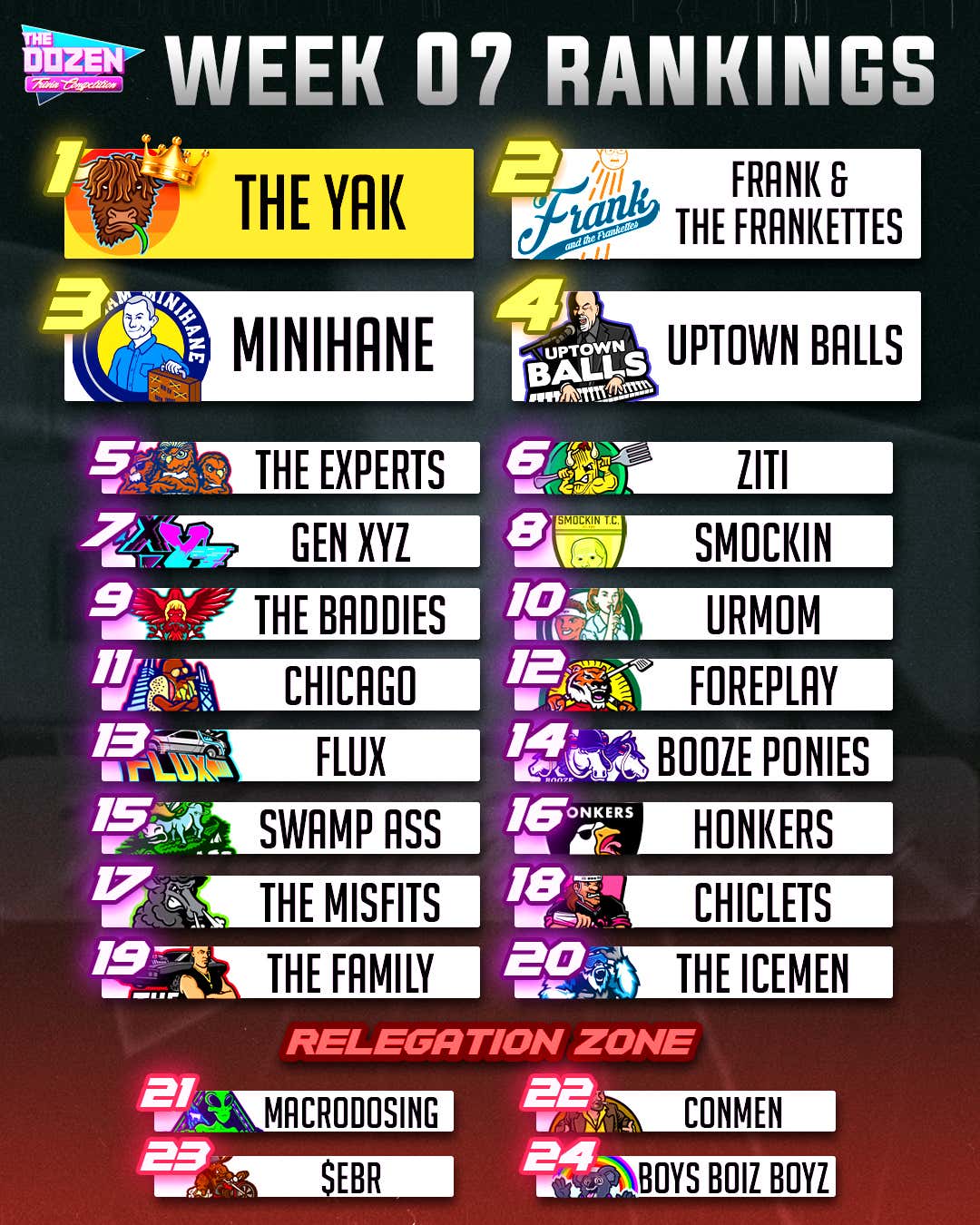 · The Yak had their first-ever successful Crown defense, retaining their #1 ranking. Smockin only drops down one spot to 8th after a strong loss.

· The Big Screamin’ Honkers have fallen on tough times, dropping to 16 after another blowout loss, the lowest ranking they have ever had as a team.

· Chicago luckily only slips from 10 to 11, which they should feel grateful for as they were a DeAndre Ayton question away from being 0-3-0.

WEEK 7 PLAYERS OF THE WEEK 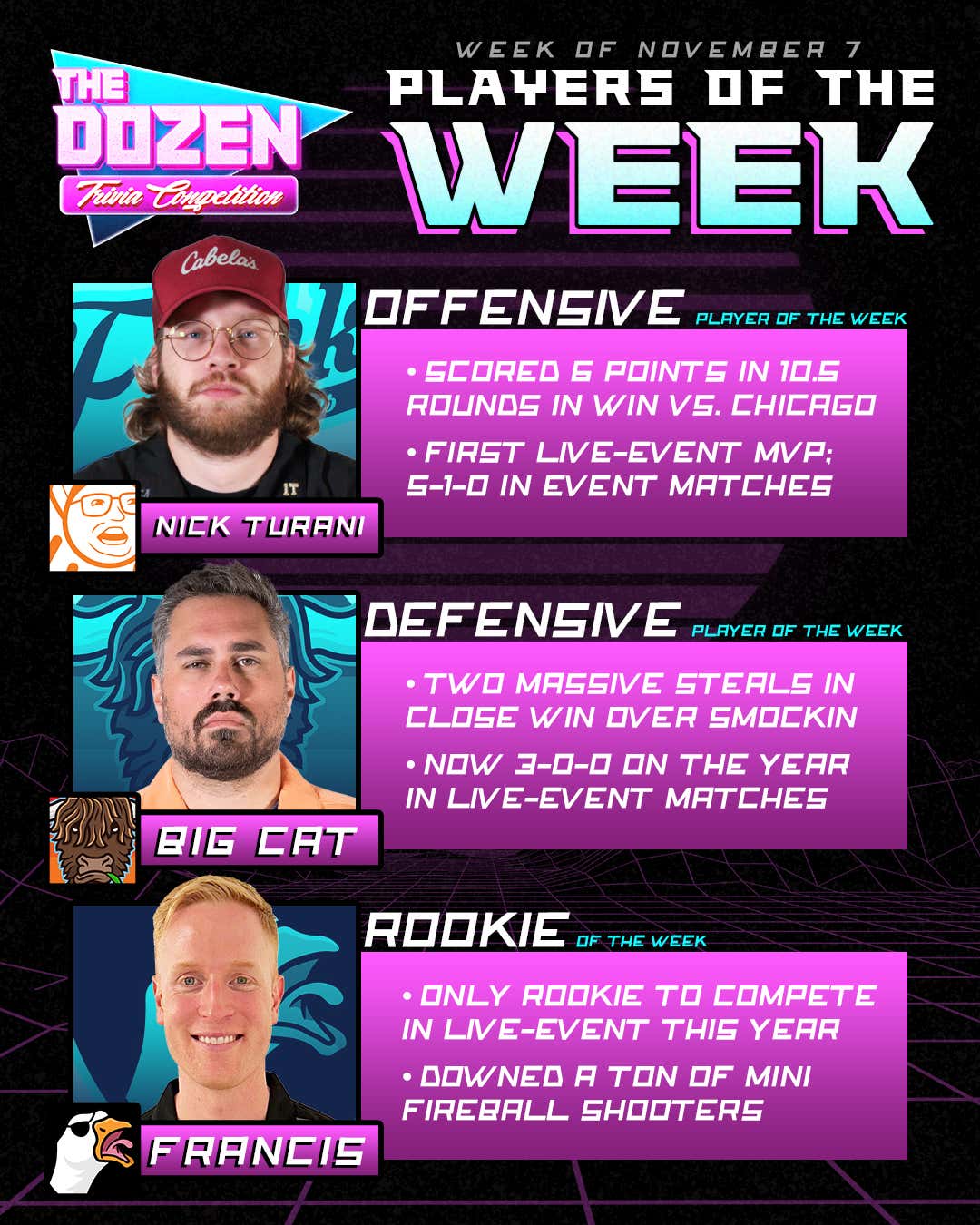 · After a rough showing in the season opener, Nick is already back to being in the Top 10 for scoring per game in the league. He crushed his Niche and The Frankettes are firmly the #2 seed in the league.

· Big Cat once again dominated in front of a Live Crowd, pulled two clutch steals, and worked the crowd to where the audience was not on Smockin’s side.

· Francis did not score a whole lot of points, but he got to drink a bunch of Fireball in front of a live crowd while everyone watching compared him to former league MVP, Coley.

--
Enjoy the matches this week!