I know the security guard is a hardo here. The man was looking to get some action after probably years of sitting there waiting for something to happen. But that's not the point of the blog. You gotta straight up cancel the proposal if this happens to you. From both sides even! You can't have a second proposal on the soccer field. Call it a fake out and say you were joking.

I say this every time with a proposal blog. For guys you know the answer is yes 99% of the time. But you're still nervous. Some people even soberly black out and forget what words are said as they are on knee just hoping the ring is facing the right way and you got the correct one. Don't bring her to pick out the ring, that's tacky as shit. The last thing you want to deal with is a security guard barreling towards your soon to be fiancee and shove her out of the way. That 99% goes to 98% chance because she's pissed.

I was even waiting for this to be staged. Like oh hunny look how funny I am. You got shoved and I was left there to defend your honor! Nope. This is real. You can tell by the look on their faces. The dude was rightfully pissed off because he was waiting for his moment. This is the look of a guy who knows he fucked up 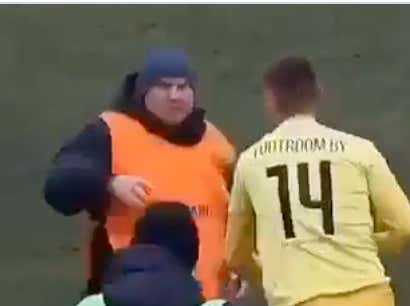 You know it's bad when the ref is even shoving the guy away. Like hey pal, I'm the enforcer here on the pitch. Take your orange pinnie and hit the showers. If a ref is standing up for you, that marriage has to get delayed. I don't make the rules, but pretty sure that's just a society rule.

Cocky as hell to do it mid-game:

[Source] - And the perfect moment arose when the defender found the back of the net in the 85th minute to score only his second career goal and seal a 2-0 win for the home side.

Anywho, congrats to the happy couple

PS: Get the security guard on an offensive line anywhere. That's pass protection at its finest.