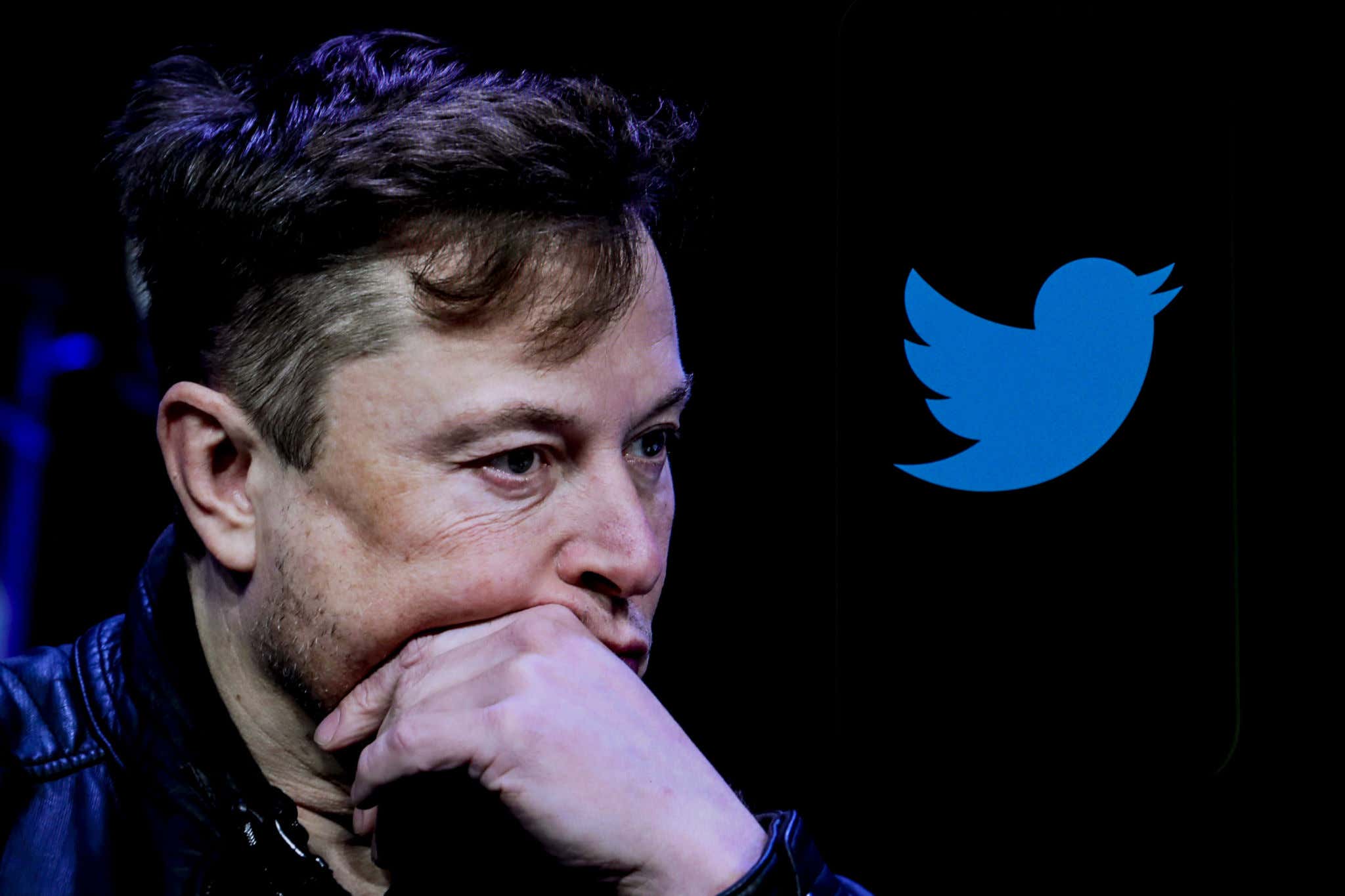 "Chief Twit" is all the rage right now. Personally, I don't care either way about the cat, as my personal Twitter experience hasn't changed at all. But goddamn people love him. And hate him. And want to prove him wrong. And think he can do no wrong. And want him dead. And (I assume) want him to run for president, even though he legally cannot do so as a South African.

Take yesterday for example. Musk took to his app and apologized for… something:

I don't know wtf an RPC is. In fact, at first I thought he was talking about the best gun in N64's "Goldeneye". Guess not though. Nevertheless, Musk is sorry for the RPCs being poorly batched in some corners of the world. That's where Twitter Employee Eric Frohnhoefer stepped in with his $0.02: 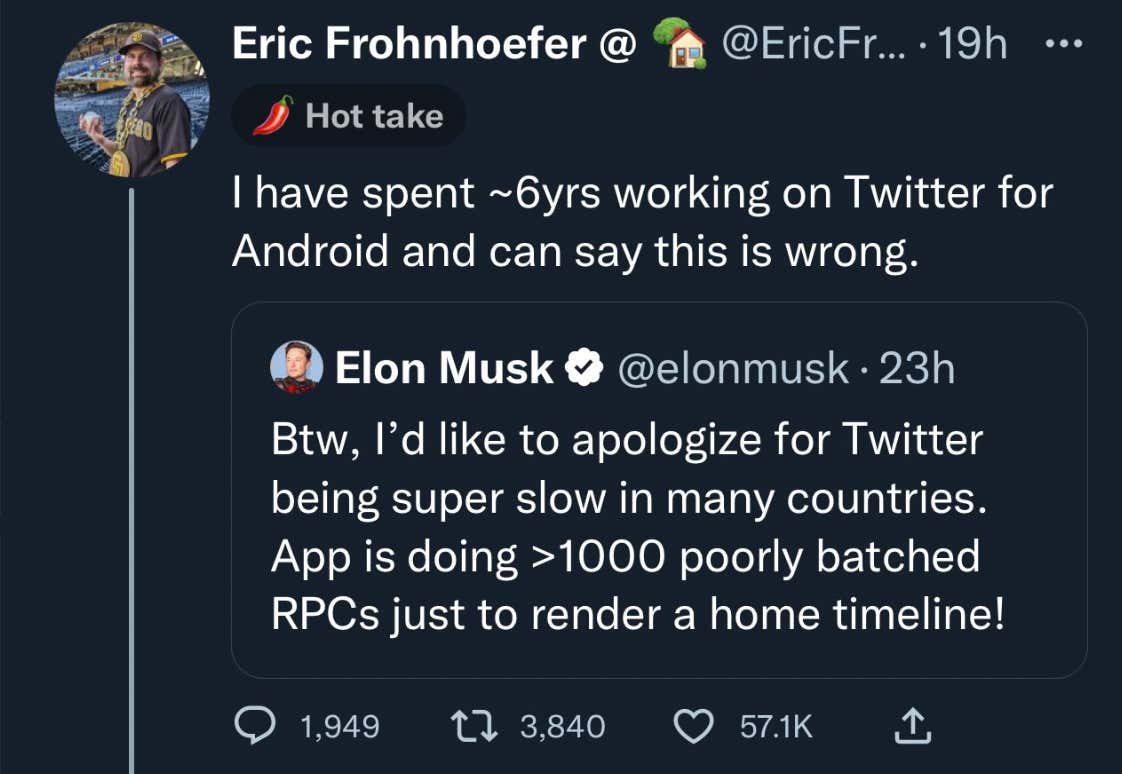 So…. who's right and who's wrong? Is he calling his boss a liar? Is he lying himself because he doesn't like Musk's social media takeover? No idea. All I know is this is a BALLSY way to call out your boss. If you do this, you better be 100% correct with your statement for one, and for two be REALLY fucking good at your job.

Otherwise… you'll be a former Twitter employee. Here's a story in 4 parts: 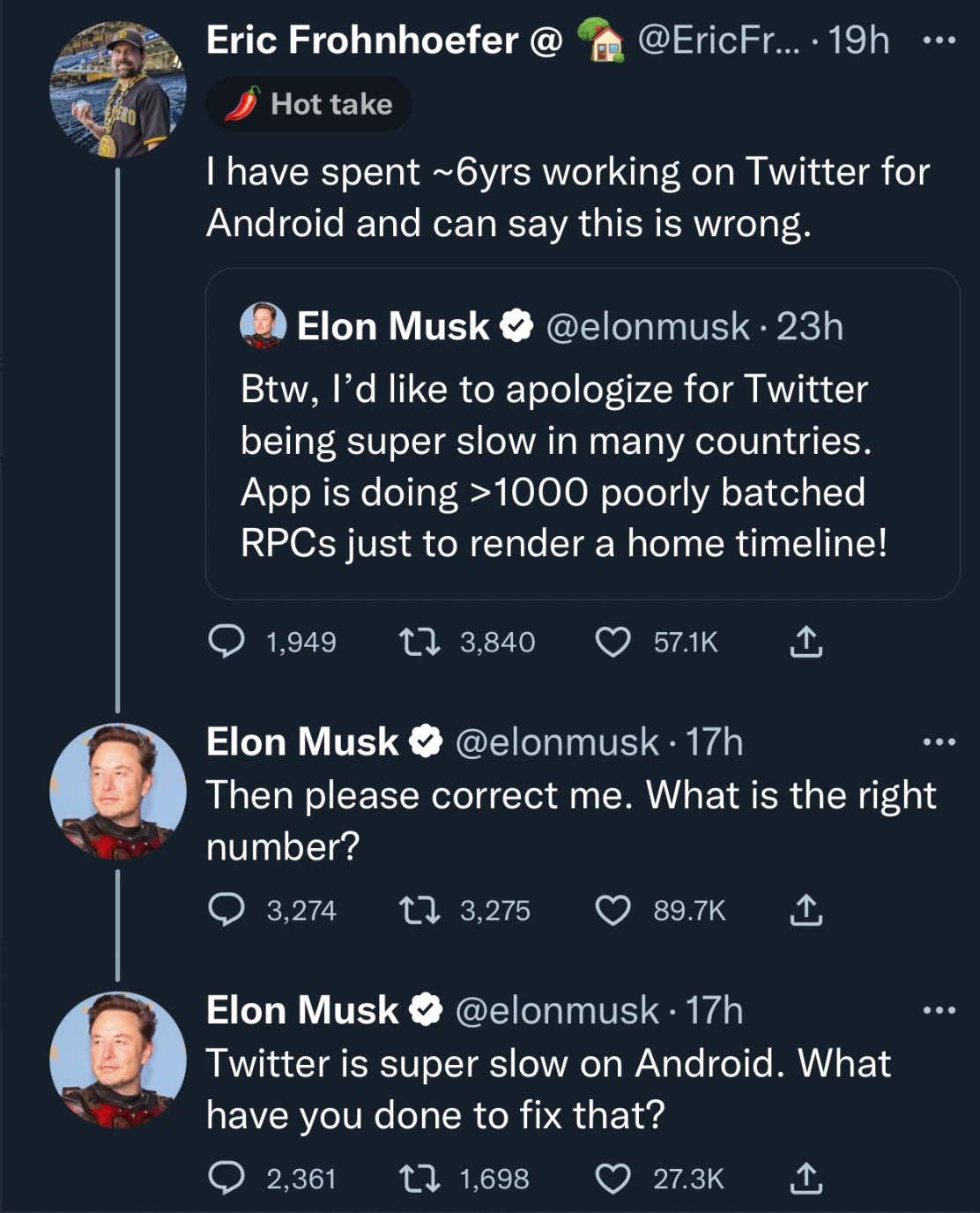 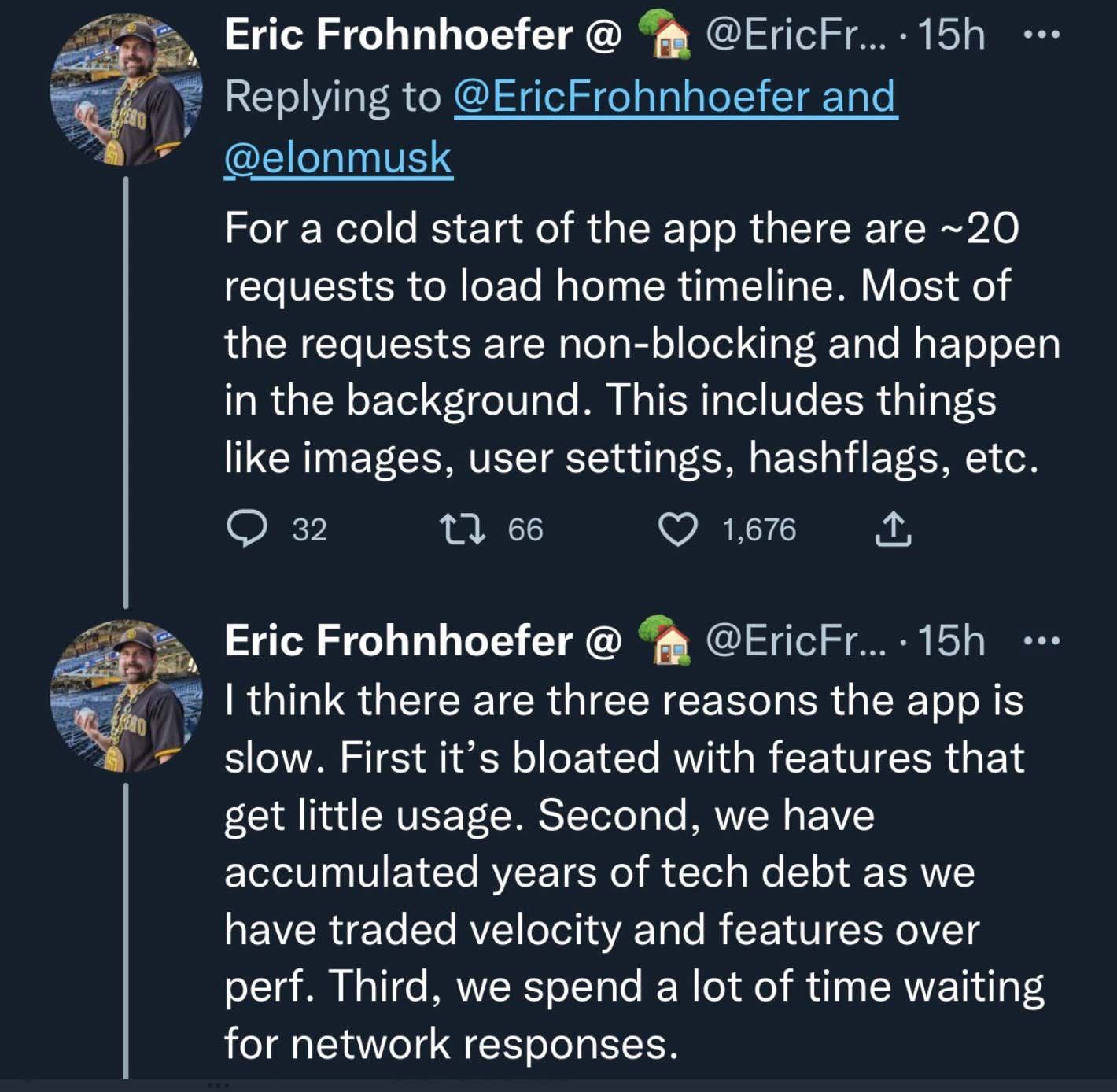 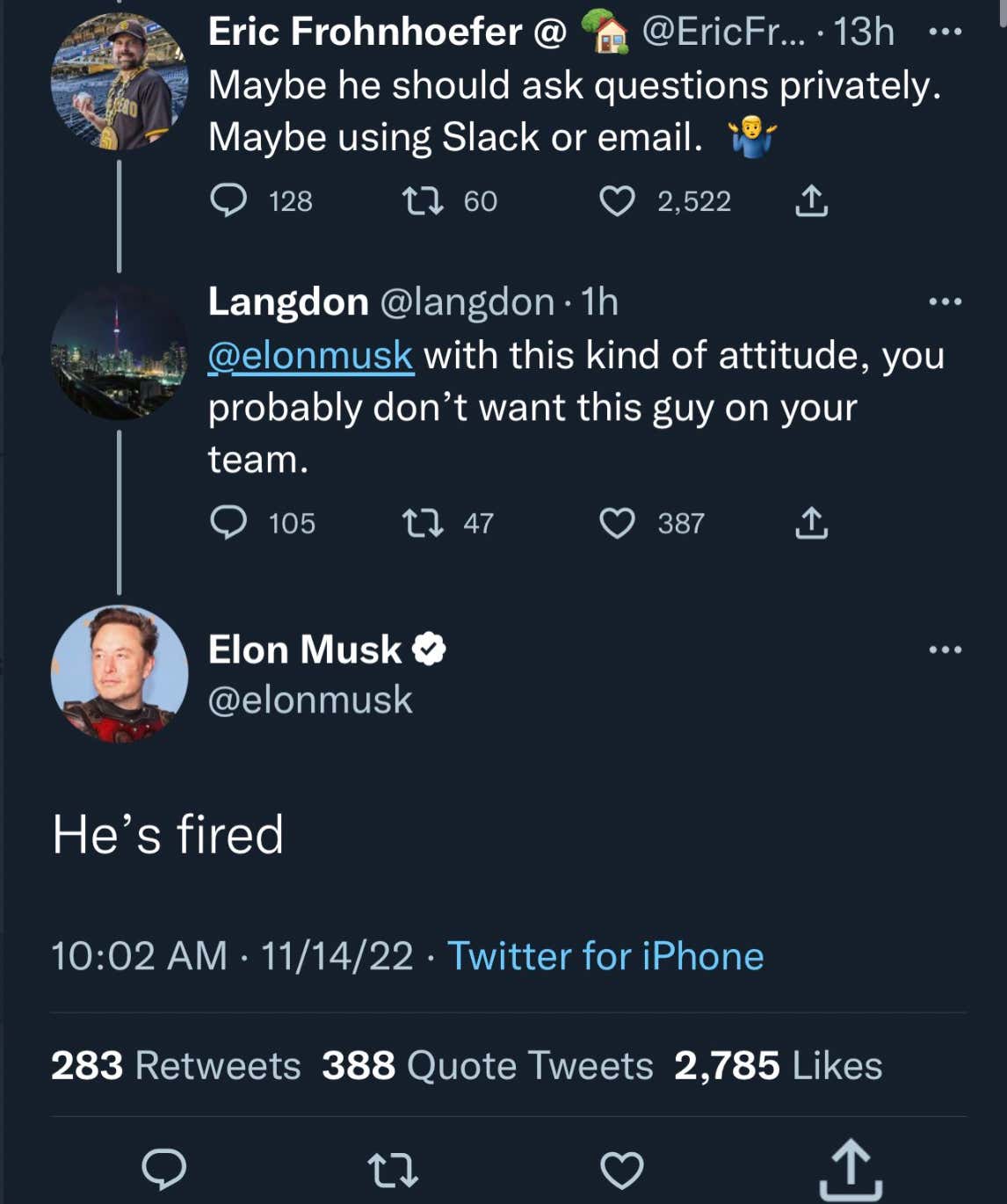 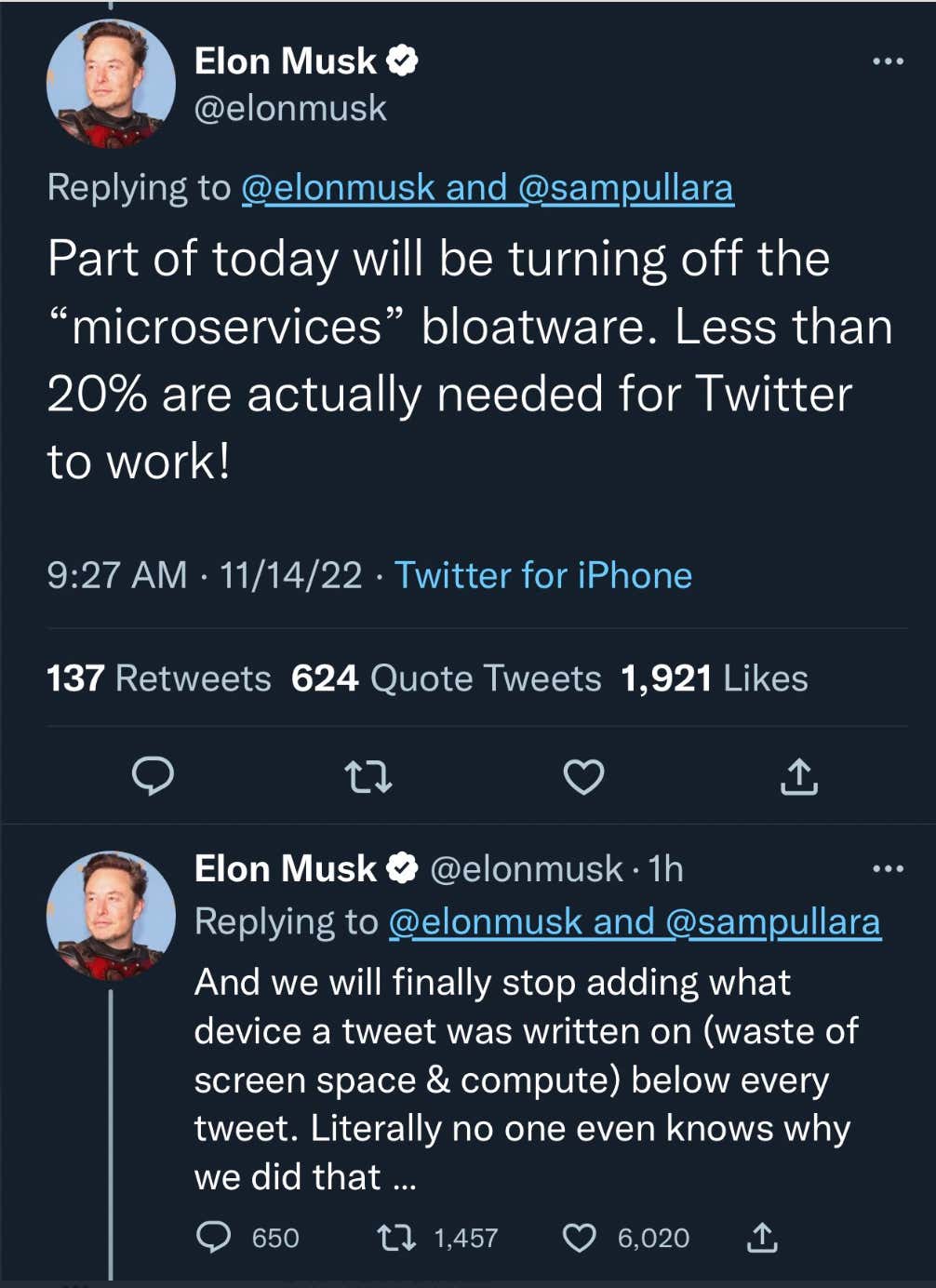 On a real note - I don't think Musk fires this guy if it's not for the "maybe he should ask questions privately" camp. I know context and tone is hard to decipher on the internet, but this guy was talking like an asshole to his boss. Can't do that, especially when said boss is on a warpath to fire as many people as he deems "not good enough" for Twitter as possible.

The Daily Mail and other outlets reached out to Frohnhoefer who said his company issued laptop, etc. were shut off within minutes of the Tweet exchange with musk. THAT, my friends, is efficiency. Maybe if Frohnhoefer was as quick as this, he'd still have his job. That simple. Don't be a dickhead on the internet. It comes with a cost. For Frohnhoefer, that cost was his job.

He'll do big things over at Facebook, I'm sure.

And that's this morning's "what did Elon do to cause people to melt down on Twitter" story. I'm sure we'll have a new one come 2pm central standard time, or so. Looking forward to it!!!