We've been doing post game Twitter spaces following each Bears game and publishing the Spaces on the Red Line Radio feed as a bonus episode each week. Before we continue, subscribe to Red Line Radio here:

There have been a lot of great talking points on this season for the Bears, the vast majority of them being positive in spite of their... uhhh... really bad roster. The direction of the org is crystal clear. Fields is making massive strides as not just a playmaker, but as a QB. Handful of young guys emerging. So far, so good for the Poles/Flus era and its reflected in Bears' fans attitudes, especially at the stadium. It was LOUD yesterday, even for a noon start against the Lions. There's a lot to love right now.

But that doesn't mean I won't criticize where criticism is warranted. You won't often see me criticize players on this Bears team for physical or mental mistakes though unless they're totally egregious. Physical mistakes happen to EVERYONE. Shit happens, get em next play. It's also an Xs, Os, Jimmy's and Joe's game. Sometime you're going to be outguessed. That's football and like physical mistakes, mental mistakes will happen.

What I cannot take is lack of effort. I don't care if it's a blowout, a tight game, a game in which the refs fuck you over like yesterday, or 1s on 1s in practice. Effort is 100% within your control 100% of the time. It not something that slumps and it doesn't get outguessed.

That's why I've personally gotten on Eddie Jackson more and more each week. I saw this play that was more or less the last play of the game yesterday, and I was really fucking annoyed with it:

To me, it was complete lack of effort from Jackson and I think it's bullshit, especially from the team captain. He's pissed about missed tackles? THEN HE SHOULD HAVE STUCK HIS NOSE IN THERE AND MADE TACKLES. If he did that and still missed because Jamaal Williams is a 225 beast and paid to break tackles, then that's whatever. Shit happens and I wouldn't have said dick. I'm pissed off because it was bad effort. I don't care that the 7 players in front of him are trash. The ball got to him and he said "fuck it" and withdrew himself from making the play.

And from my eye, it's been an issue all season long from the highly paid, former all-pro safety. Again. Mind you, this is on the heels of two really bad seasons in a row after his all-pro 2018/19 campaign.

Here are two more examples from two weeks back against Dallas:

Two plays that directly led to scores. The 2nd link is a little muddier, but he still wanted NOTHING to do with making contact on the RB there, even if the LB was in his way to do so. That's my frustration. I see plays happen like this weekly. I often don't even verbalize when they do, because if I do then the entire internet shits down my throat.

Look, Eddie Jackson is a veteran. He's a captain. He's a former All-Pro. He's everything off the field you want in a player and leader as well. But I cannot get over plays like this, that happen WAY too often, from a guy who is everything I just mentioned. If he weren't all the things I just listed, I wouldn't say shit. I have larger expectations for Eddie Jackson BECAUSE he's those things. I'm grading him on a curve, and that curve makes my expectations for him all the grander.

Uhhh…that's exactly what his job is, and if he's afraid to stuff a completely average 225 lb RB, and one that did NOT have a "full head of speed", but actually already had a LB draped all over him… 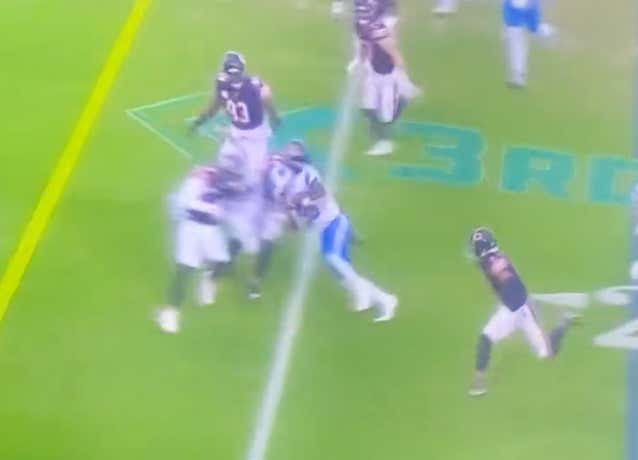 …then he shouldn't be in the NFL, because that's literally his job: To be the last line of defense and stop explosive plays from happening. On this play, Jackson flat out quit. I personally don't care about Ws and Ls this year and even think yesterday was a good "tank" loss, but you still want to build winning habits and play winning football, especially out of the guys that will be here in the futuer. Jackson - as team captain - should be leading by example and I felt that he completely quit on this play.

I don't like that. If you want to defend him, that's your prerogative. I can't and I won't.

This was NOT winning football. These are NOT winning habits. It was loser, defeatist football and is not the culture you want cultivated from your freaking captain. Disagree with me if you want, this is my opinion on the matter. Attitude reflects leadership, captain. And if his attitude is "fuck trying to tackle this 225 RB" then what are all the kids that are going to be shuffled through the 56 man roster over the next couple of years going to think?

There's my $0.02. This play really, really rubbed me the wrong way. If he put his hat down and tried to really stick the RB and got beat, fine. That happens to every safety in football here and there. He didn't though. He gave an ole, half assed effort. If Eddie Jackson is sick and tired of the Bears missing tackles, he should look in the mirror first and foremost. A large chunk of this roster won't be here next year because a large chunk of this roster isn't physically gifted enough. Eddie Jackson most likely will be. If these kind of issues persist next year - which I genuinely hope they don't - what kinda excuses will people have for him? That said, it's not like he had been good the last two seasons when he had guys like Akiem Hicks and Khalil Mack in front of him…

We'll talk about it a bunch on RLR this week. Check it out below: