I've searched high and low as to why specifically Georgia Southern has this tradition. I can't seem to find it. I don't care. It's awesome and apparently been going on for years:

I didn't know Georgia Southern had that in them to be honest. It's not like they are this awesome mid-major or anything. They haven't made the NCAA Tournament since 1992. But you get to toss toilet paper and people come out to the arena by the hundreds. Here's my problem though. I know it's after the first basket, but you can't do it after a free throw. That just seems like a let down. I want to launch that shit cleaning device after a nice offensive possession.

Smart to do it against Trinity Baptist too. I'm not saying Georgia Southern is playing big time games, but you can't do this in a big time game. There's already enough nerves in the arena. You are already begging for the refs to get out of there and not call a million fouls. Can't start that game with a technical. But then again, you're Georgia Southern. Launch toilet paper at all times. Not like y'all are gonna win a lot anyways.

The mascot rules though: 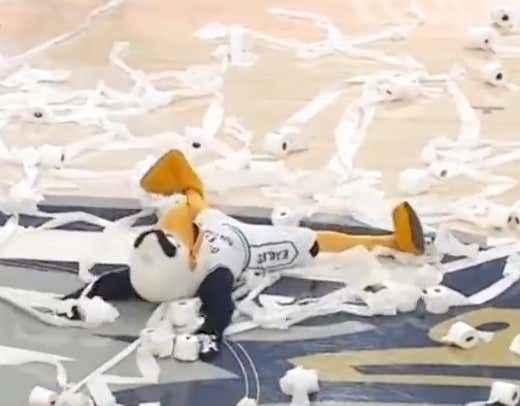 I'd love to see an NBA team do this just for the confusion. It's why college sports is the best. Give me all the dumb traditions. Give me all the weird stuff like this. Imagine the reaction if Bucks fans just started launching toilet paper onto the court against like the Kings.