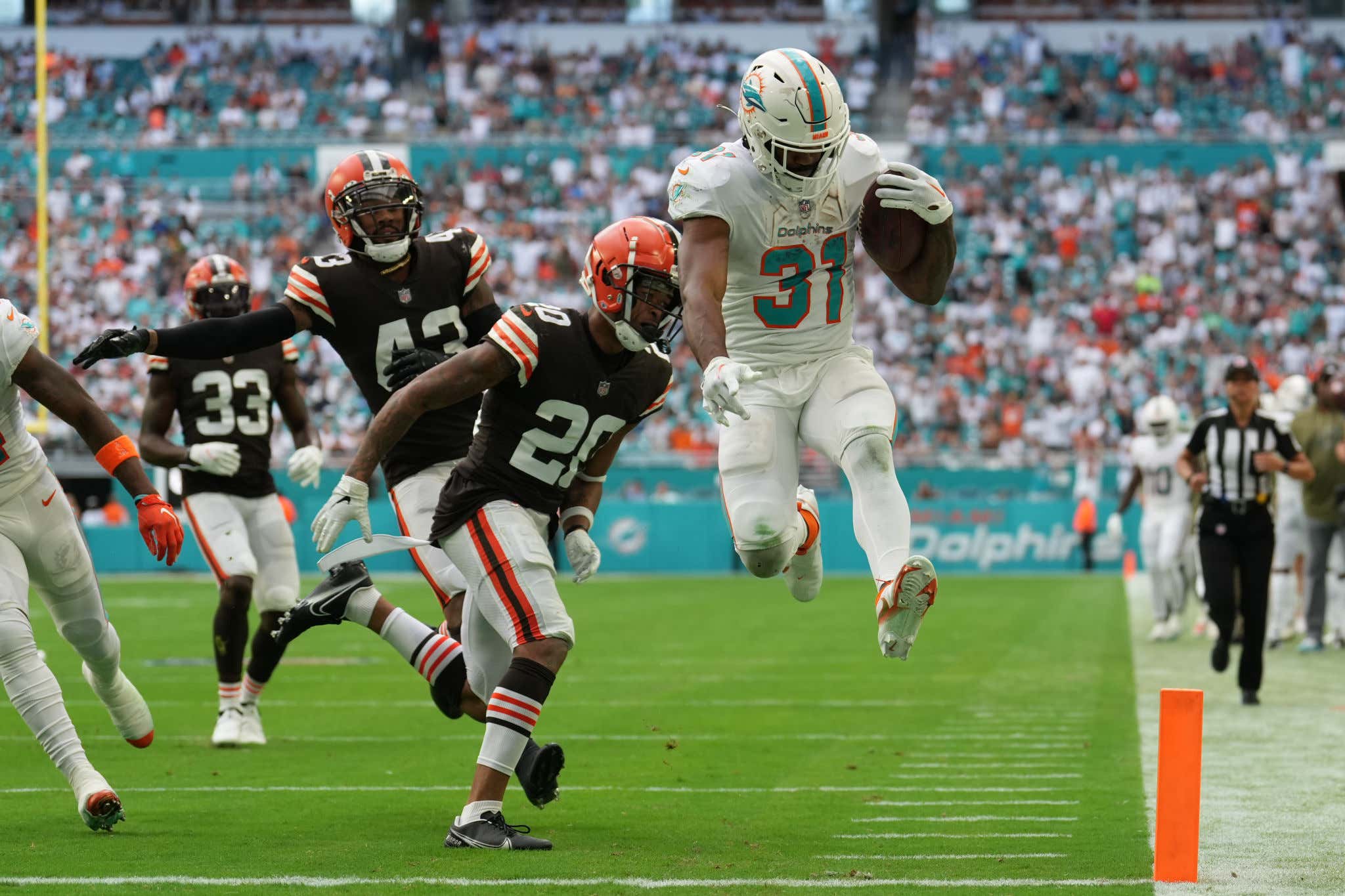 The Miami Dolphins are in first place as they prepare for their bye week with a record of 7-3. The Dolphins won their fourth straight game on Sunday, slamming the Cleveland Browns 39-17. In beating the Browns, the Dolphins used their rushing attack, as Jeff Wilson Jr. had 119 yards on 17 carries with one touchdown, while Raheem Mostert had 65 yards on eight carries with a touchdown. The Dolphins' ground attack left Tyreek Hill, and Jaylen Waddle grounded, as neither collected 100 yards. Incredibly Alec Ingold had more yards through the air than Hill, with 45 yards on four catches, including a 13-yard touchdown catch.

While the Dolphins rolled over the Browns, the Buffalo Bills suffered a second consecutive loss, losing their grip on the AFC East. In one of the season's most insane and thrilling games, the Bills blew a 17-point lead. It appeared the Bills had the game won, but after an exciting goal-line stand, Josh Allen fumbled as the Vikings recovered in the end zone for a touchdown. Allen drove the ball into field goal position to tie the game, as the game went into overtime. The Vikings got a field goal on their first possession of overtime, while Allen was picked off in the end zone, securing a 33-30 win for the Minnesota Vikings.

The Browns sliced apart the Dolphins' defense on the game's first possession as Harrison Bryant caught a one-yard pass from Jacoby Brissett. The Dolphins' defense stiffened the remainder of the gamer, as the Browns would not score again until the third quarter. Miami could have had a bigger lead, but trying to be cute, had them settle for a field goal and turn the ball over on downs in the second quarter. Just before the half, Trent Sherfield caught a 14-yard pass from Tua Tagovailoa, which was a perfect dime in the back core of the end zone.

Getting the ball to start the second half, the Dolphins scored with a 24-yard run by Raheem Mostert and never looked back. A silly roughing the passer penalty helped the Browns get points on their first drive of the second half, but the Dolphins did not break, forcing Cleveland to settle for a 37-yard field goal by Cade York.

The Dolphins' offense played at a high level and did not punt during the game, gaining 491 yards on offense, compared to 297 yards by the Browns. Tua completed 25 of 39 passes for 285 yards, with three touchdowns. It should be noted that Tua was not sacked, as the offensive line, in the second game without Liam Eichenberg, did a wonderful job protecting the quarterback. The line also did not commit any holding calls, as a false start by Robert Jones was the only blemish.

During the bye week, the Dolphins may need to look at new kickers, as Jason Sanders missed a pair of PATs and has struggled. Sanders has not made a kick over 50 yards and has missed three extra points. Sanders did hit a pair of field goals, but his kicking has been an adventure; even on kickoffs, he has not been able to consistently get touchbacks, as the Dolphins have allowed several long returns.

The Bills, meanwhile, have been stumbling. They lost in overtime in a game that the Bills appeared to have under control with a 27-10 lead in the third quarter. Josh Allen had a pair of interceptions in the red zone that allowed the Vikings back in the game. Allen also fumbled when Buffalo tried to run out the clock in the final seconds. He was able to drive down in 30 seconds to tie the game. But after the Vikings hit a field goal, Josh Allen was picked off again to end the game.

In the NFL's toughest division, with all four teams over .500, the Dolphins are on top at 7-3. It is the first time since 2001 that the Dolphins are 7-3. The Jets and Bills are next at 6-3. The Jets beat Buffalo last week and had a bye this Sunday, as did the 5-4 Patriots. The Dolphins will enjoy a bye week next week, allowing their banged-up secondary to get healthy. The Bills will hope to get back on track by hosting the Browns next week, while the Jets and Patriots meet in Foxboro. The Dolphins' next game will be in two weeks against the lowly Texans before starting a tough three-game road swing in December.