Oh boo fucking hoo. This guy is the ultimate smug, cry baby. He's a lot like LeBron in the way he complains and tries to deflect blame on quite literally every single other person to exist. It's never his fault. It's never that he screwed up. Now he's doing 'bombshell' interviews where he can say he was betrayed by Manchester United and say he doesn't respect their manager. I don't know dude, maybe respect him? Seems like a normal thing to do. Then again, look at this face when he says it: 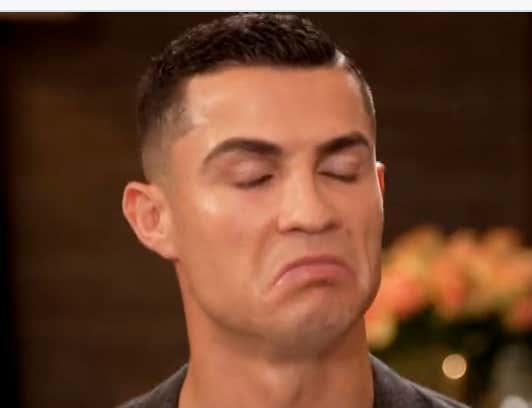 Sure, there's a variety of reasons he feels 'betrayed.' Only one is legit in my eyes:

I'll never knock a father for wanting to be with their kid, especially in this situation. Any person can be a human here. Now we're also talking professional sports at the highest level. You're 37 years old, did you think you could just come back and immediately be the guy you were prior? Of course not. Which is why this is ridiculous:

[Source] - He doesn’t expect any special treatment, but he does expect to be treated with the respect he feels he has earned.

The dude demands special treatment. He expects everything to be catered to him.

Ronaldo himself refused to come into a game as a sub during Manchester United's biggest win of the season. But he doesn't want special treatment. He just wants to dictate when he plays and when he's allowed to be subbed in. Forget helping the team. Forget trying to help the team win. Nope. He didn't want to be 'embarrassed' by coming in late against Tottenham so he screams he's not respected. Fuck outta here.

Or that he's trying to be forced out:

At some point why would Manchester United want him around? He's more of a distraction this year than anything else. He's not out there scoring every time. He's not changing matches. He's often sulking and a bigger storyline for shit like this.

It's like I always say with LeBron. You can't take away how damn good this guy is at this game, but he's also just a complainer. Everything is always a problem for him and he never can say 'you know what, I fucked up here.' I don't know who walks away from this interview feeling bad for the guy. He did nothing but point the finger everywhere else.