That was flat out disgusting. After a complete and utter domination of the Bengals on Halloween night, and then hearing about how great Kevin Stefanski is coming off Bye Weeks, I will admit that I drank the orange Kool Aid and thought the Cleveland Browns were going to win today. And with that win, we would be 4-5 and right in the thick of things. Unfortunately, our offensive line played the worst game of the season. Our defense turned in their normal performance.....worst in the league. Myles Garrett must've forgotten to get on the plane to Miami. And Nick Chubb / Kareem Hunt got a COMBINED 17 carries. HOW? 11 for Chubb, and 6 for Kareem. Unacceptable. The Browns had 2 weeks to prepare and we came out with THAT?

I don't know why I fell into the trap though. This cycle has been on repeat for years:

That's what I got for you. There's literally not one good thing that happened in today's game. The only positive news revolving around the Cleveland Browns right now, and I'm sure the comment section and Twitter haters are going to love to hear this one, is that tomorrow marks the first day Deshaun Watson is allowed to practice.

I want him to get every 1st team rep. Every. Single. One. This is not Jacoby Brissett's fault, but he is who he is: an okay backup QB. I need Deshaun Watson to be worth 230 million fully guaranteed dollars, our 1st round draft picks until I die, and all of the hate that Browns fans have taken. And that starts in Week 13 vs. the Texans. I want/need him to throw like Mahomes, run like Fields, and lead like Brady. The only problem is, even if he is all of that, he still can't stop the run. He can't play linebacker. He can't cover receivers and tight ends. This defense simply stinks.

It must be noted though, that like I blogged after the Bengals win, today was NOT a must win game. 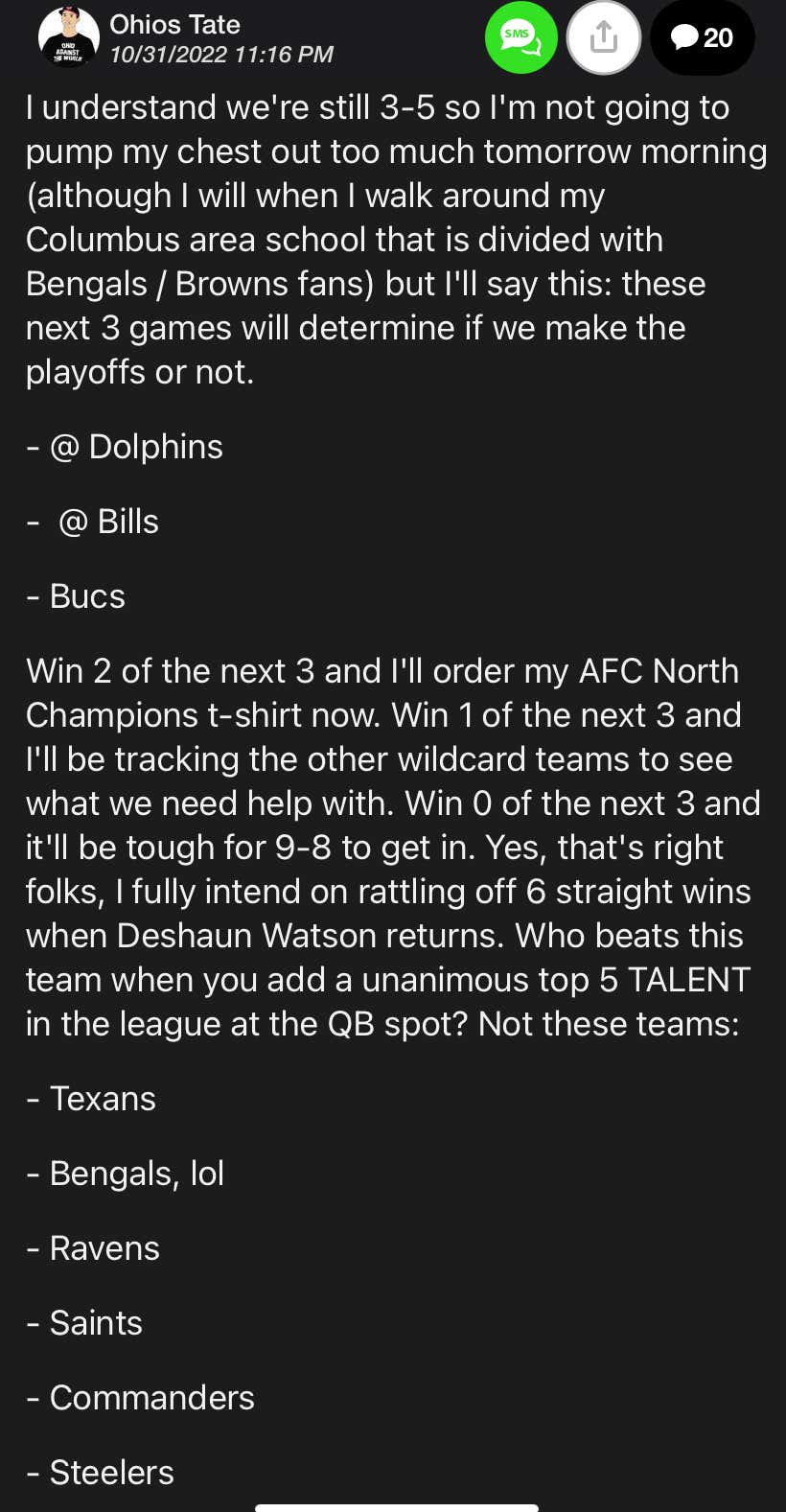 The point still stands. The Browns needed to win 2 of their next 3 to put Deshaun Watson in a position to win the AFC North. And they needed only 1 of the next 3 to put him in a position to make the Wild Card. The problem is that at the time of publication, the Bucs looked terrible, Josh Allen got hurt, and I thought we were going to beat the Dolphins. Now we got our ass kicked by the Dolphins, Josh Allen is fine, and the Bucs are hot. Today may have not been a must win, but now we've got two straight games in which we'll be heavy underdogs, and we need to find a way to win one. The good news is that Tampa Bay ranks dead last and Buffalo is in the middle of the pack for Rushing Offense…..until they play Cleveland.