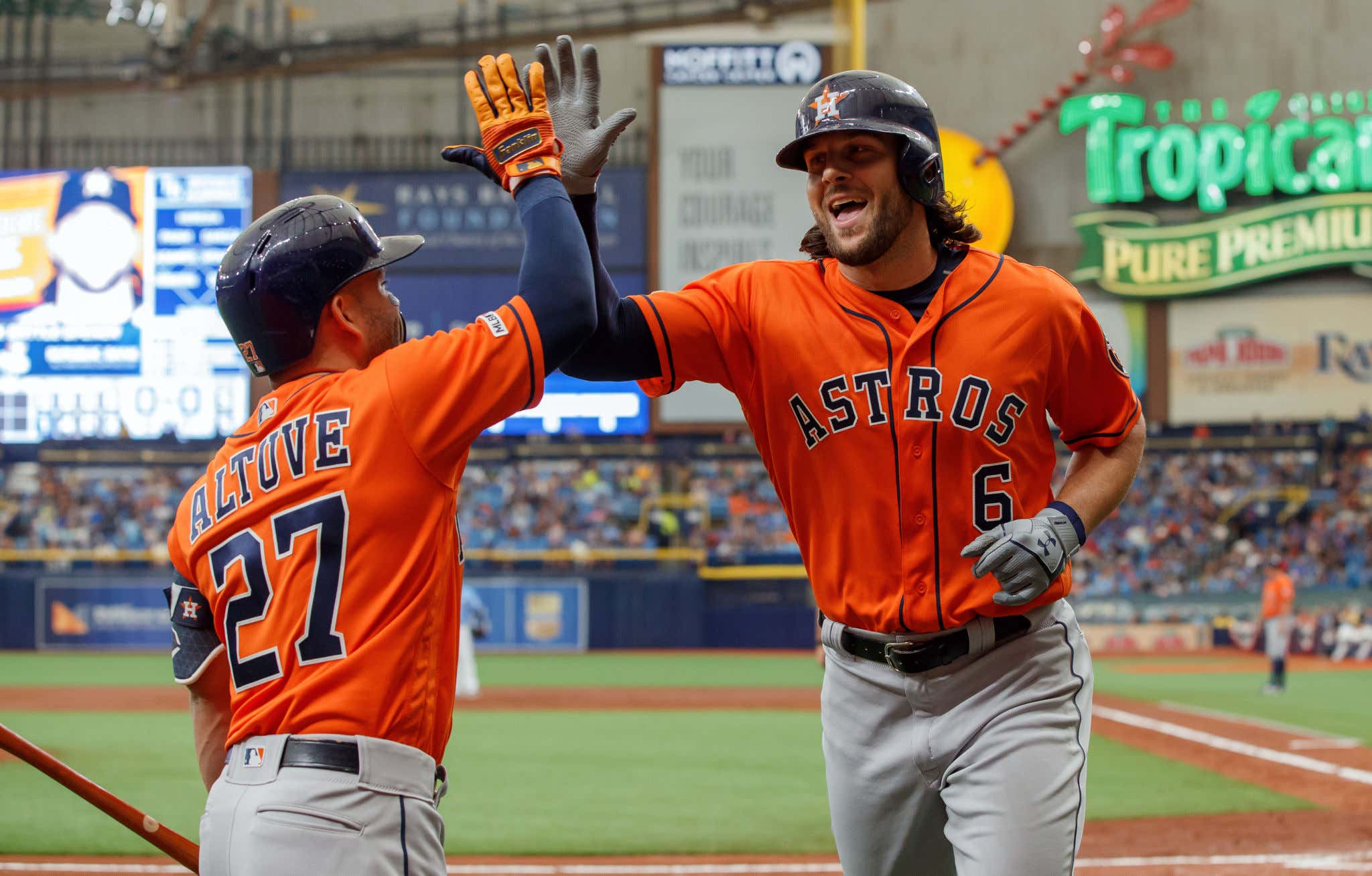 Dave is coming off of a massive win vs. Manny Machado to put him firmly in playoff position with five weeks to go in the regular season, but Jake Marisnick's team is STACKED. 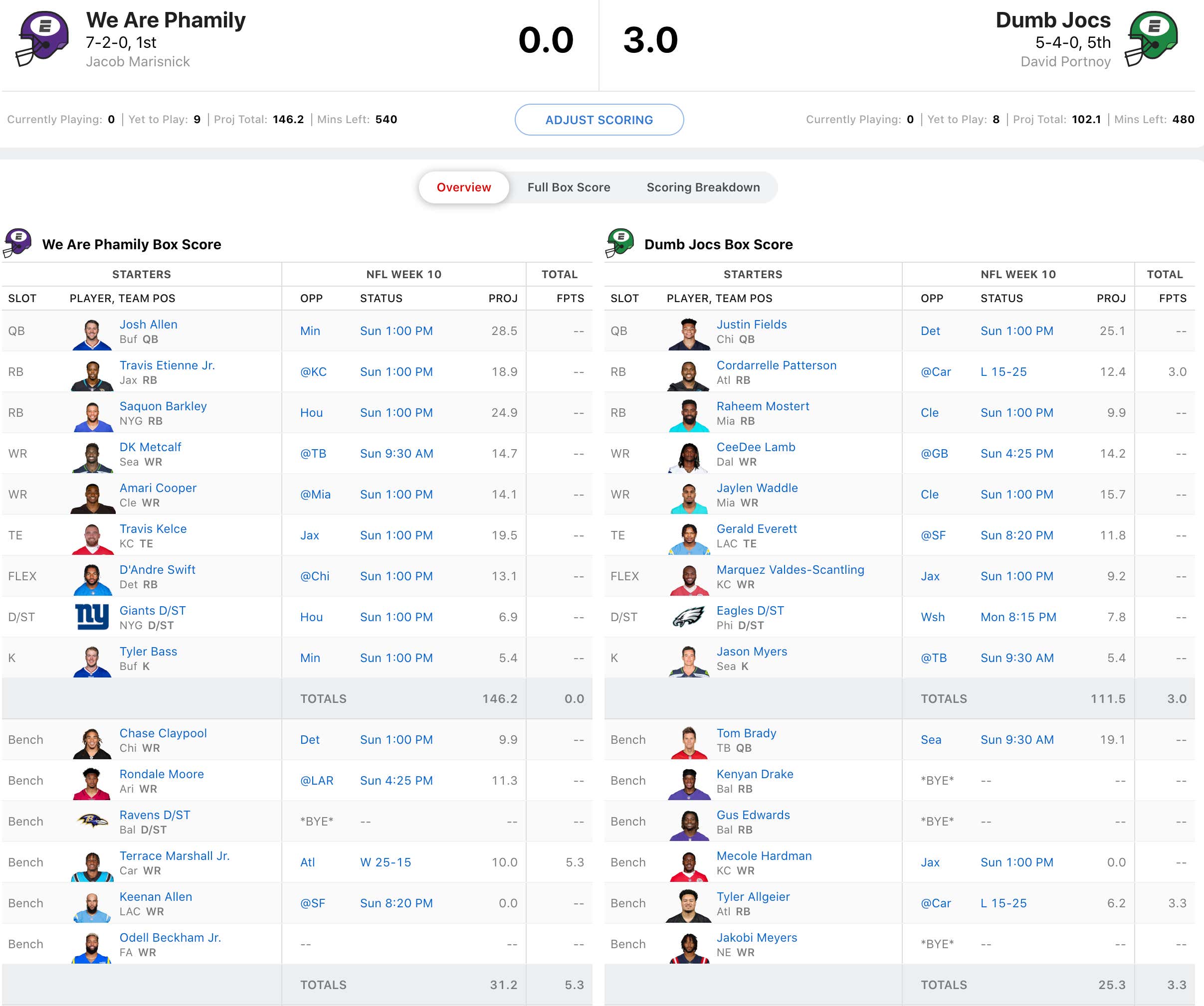 The big question will be Josh Allen and how effective he'll be with that UCL injury. Dave has a shot with that, especially with Justin Fields at QB who put up 48 points last week. A disappointing performance from Cordarrelle Patterson on Thursday Night Football certainly doesn't help his case, but Jaylen Waddle and CeeDee Lamb are explosive guys that can win you a week. But Marisnick has got a bunch of those type guys too with Saquon Barkley who gets the NFL's worst rush defense this week in the Texans, Travis Etienne Jr., D'Andre Swift - who has been taken off the injury report, and Travis Kelce. It is going to be TOUGH to knock this team out of the playoffs in a few weeks barring a couple injuries.

Commisisoner Cheah's pick: We Are Phamily

Speaking of Manny, he's got a big matchup against Wil Myer's who sits firmly in 2nd place: 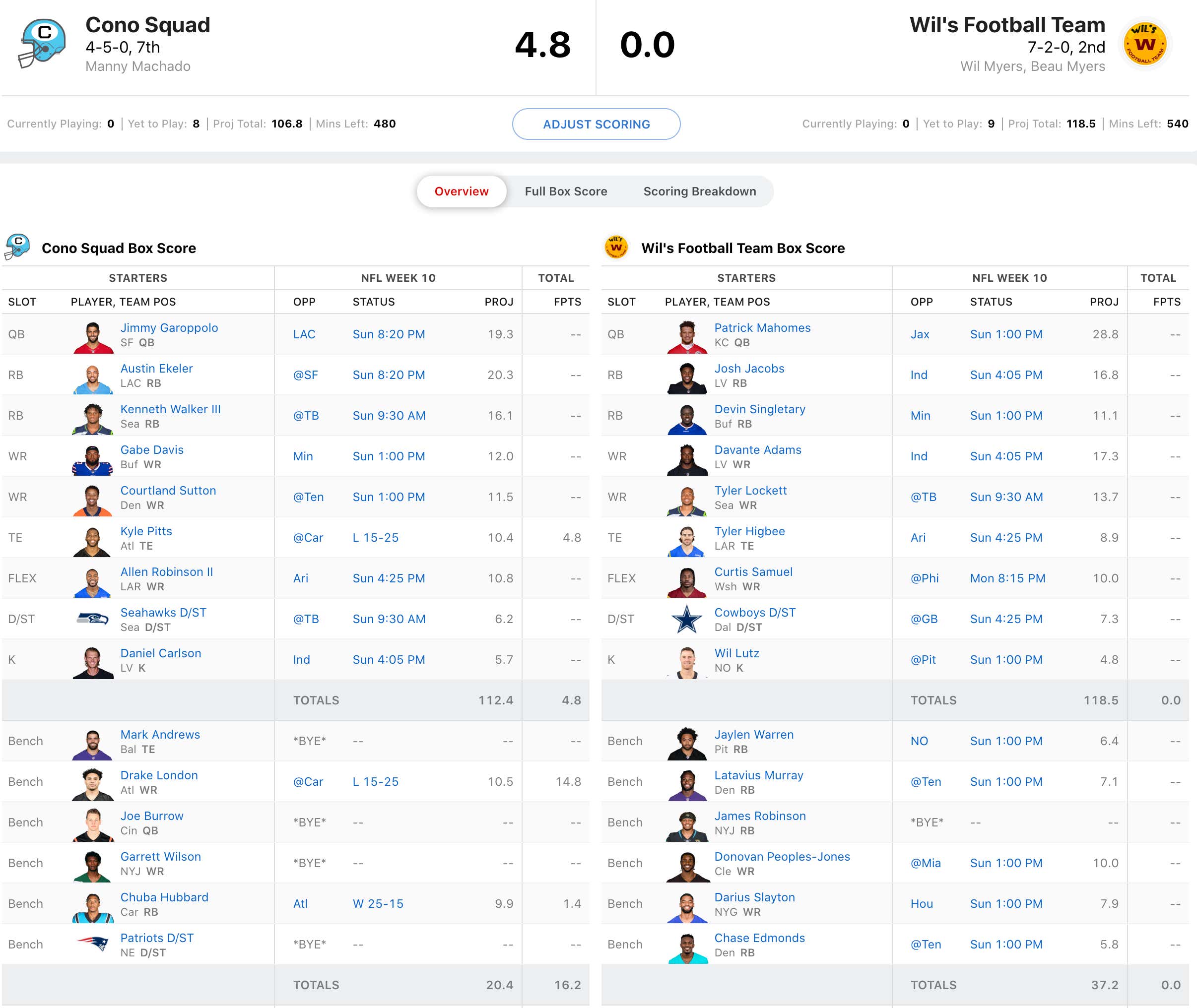 Manny has some bad luck not only in his opponent, but his bye weeks with Joe Burrow and Mark Andrews both on bye. Though hopefully for him Andrews gets healthy during the off-week. Austin Ekeler, Kenneth Walker III, and Gabe Davis are explosive, but he'll need them all to go bonkers to have a shot in this one. Wil's team may be punching above their weight class, but they're solid across the board and I like them to take it here to move to 8-2.

Team Questionable has the lowest amount of points in the league, yet they sit in 6th place, they get Mike Napoli's squad who is on a two game skid and in danger of falling too far out of the playoff picture with a loss. 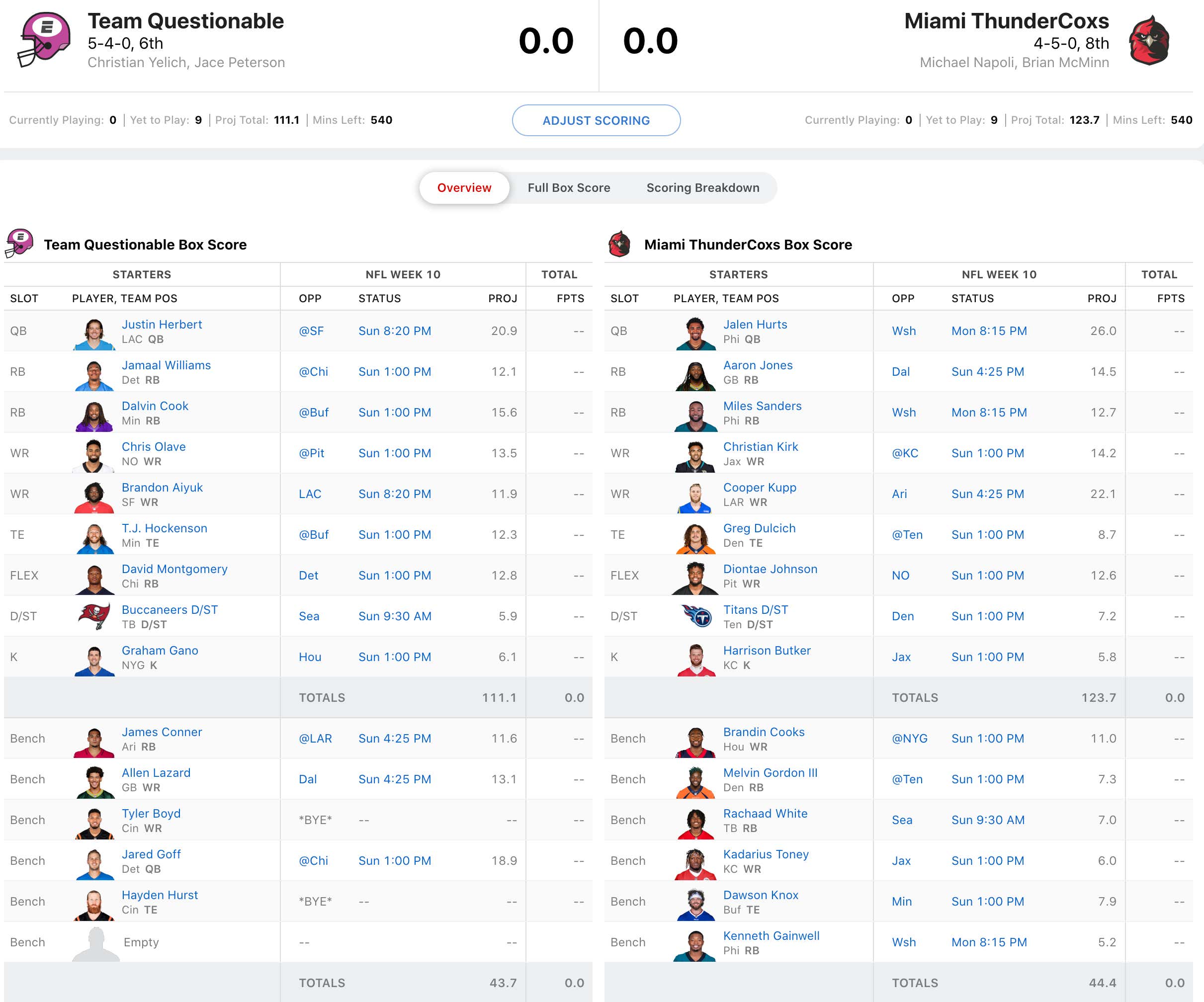 The duo of Christian Yelich and Jace Peterson get Justin Herbert in primetime, where he's typically shined. But they'll need huge games from Jamaal Williams and Dalvin Cook to have a shot here. T.J. "Hitchings" Hockenson made a great first impression with 9 grabs in his Vikings debut. That could go a long way to helping keep them in the playoff hunt. Meanwhile, Napoli has been being carried by the duo of Jalen Hurts and Miles Sanders and facing a Commanders Team they wrecked earlier this year, this week is looking tasty! Greg Dulcich is a nice addition at TE and they've got some target monsters at WR with Cooper Kupp, Diontae Johnson, and Christian Kirk. I like Napoli to get off the schnied fairly handily.

The team with just two more points on the year than Team Questionable is the trio of Joc Pedersen, Alex Wood, and Austin Barnes. This week they get the team that has scored the most points in Mike Moustakas. 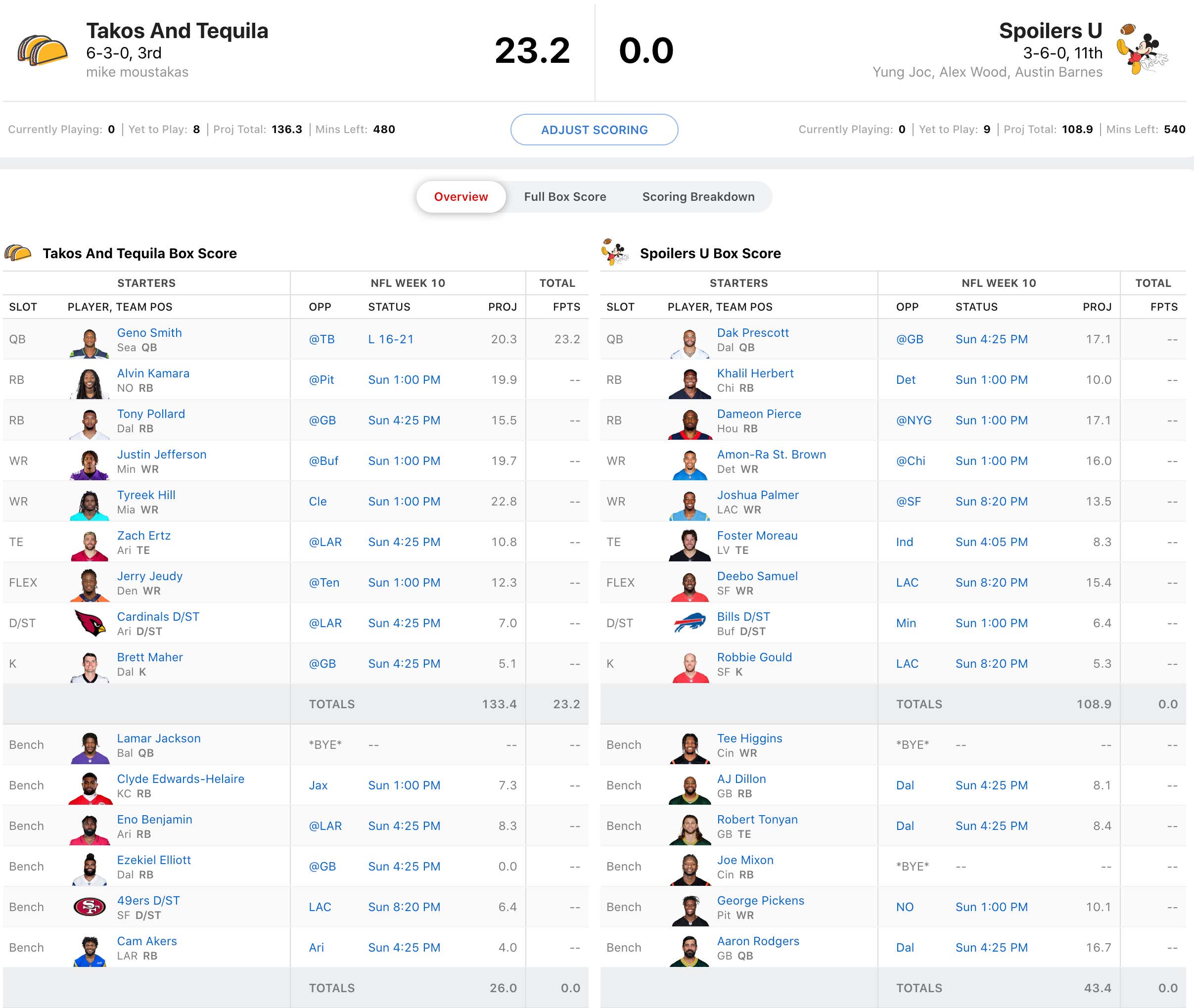 The good news is that they get Moose with Lamar Jackson on a bye. But if Zeke misses the Packers game, that elevates Tony Pollard to RB1 level. That paired with Alvin Kamara, Justin Jefferson, and Tyreek Hill is a nightmare to face even without Lamar. Deebo Samuel is back for them, but they'll need monster games from Deebo, Dak Prescott, Amon-Ra St. Brown, and Dameon Pierce just to have a shot today.

He doesn't have the least amount of points but reigning World Series Champion, Alex Bregman is in last at 1-8. This week he'll get the streaking duo of Shane Bieber and Austin Hedges. 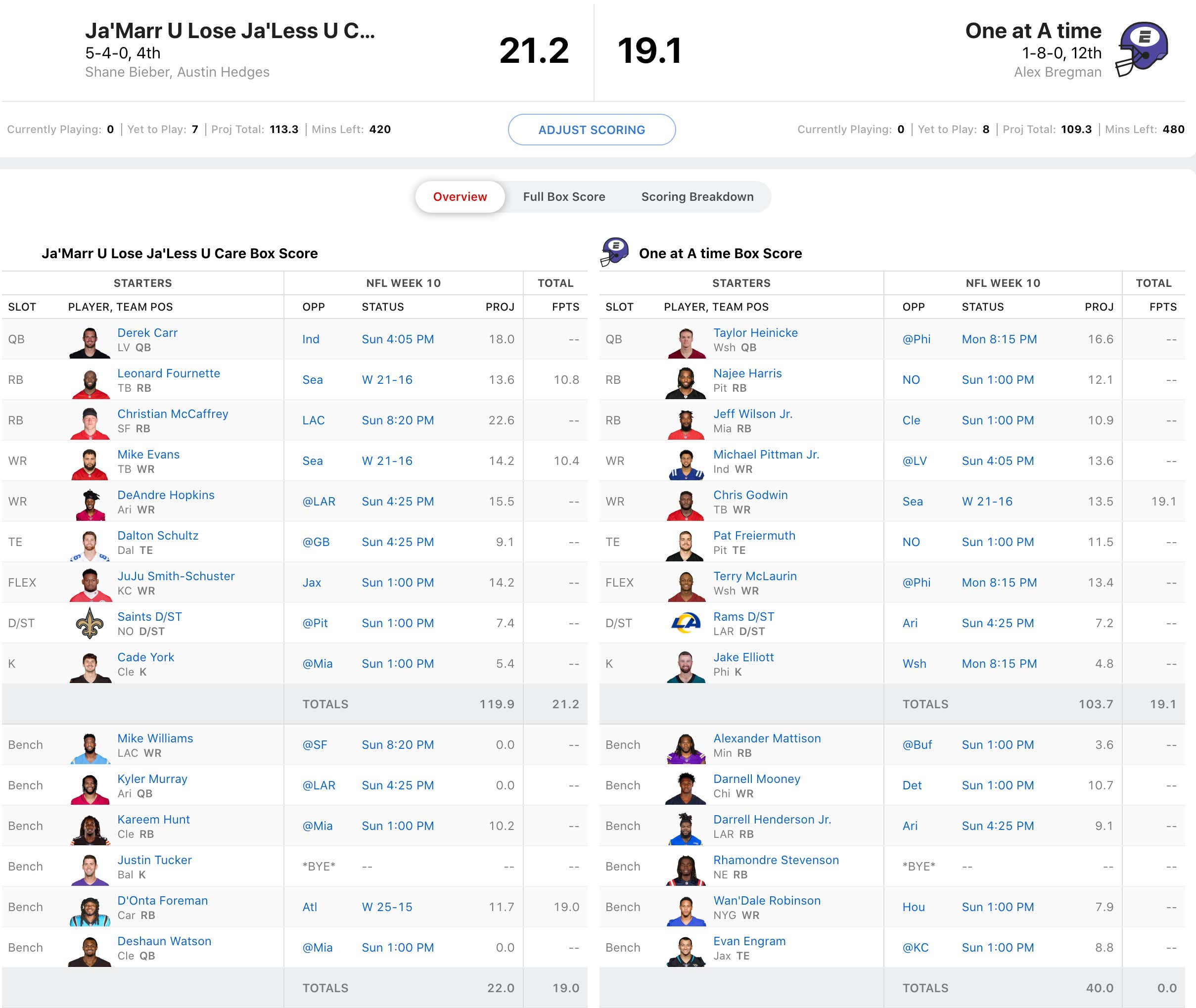 The Guardians duo didn't play D'Onta Foreman on TNF which cost them 19.0 points. Not a great way to start the week. Bieber/Hedges made an interesting move dropping their QB1, Kyler Murray so they could play a icker this week. I guess they're banking on Deshaun Watson soon? The Germany game players of Lenny and Mike Evans both underperformed, so Bregman has a shot here.. However, Bregman will hold out hope with his own stack of Taylor Heinicke and Terry McLaurin going on Monday Night. With a loss, Bregman will likely be eliminated from the playoffs.

Commissioner Cheah's pick: One At A Time

Mike Trout is in need of a win to stick around in the playoff hunt and he gets Eric Hosmer who has an interesting decision to make. 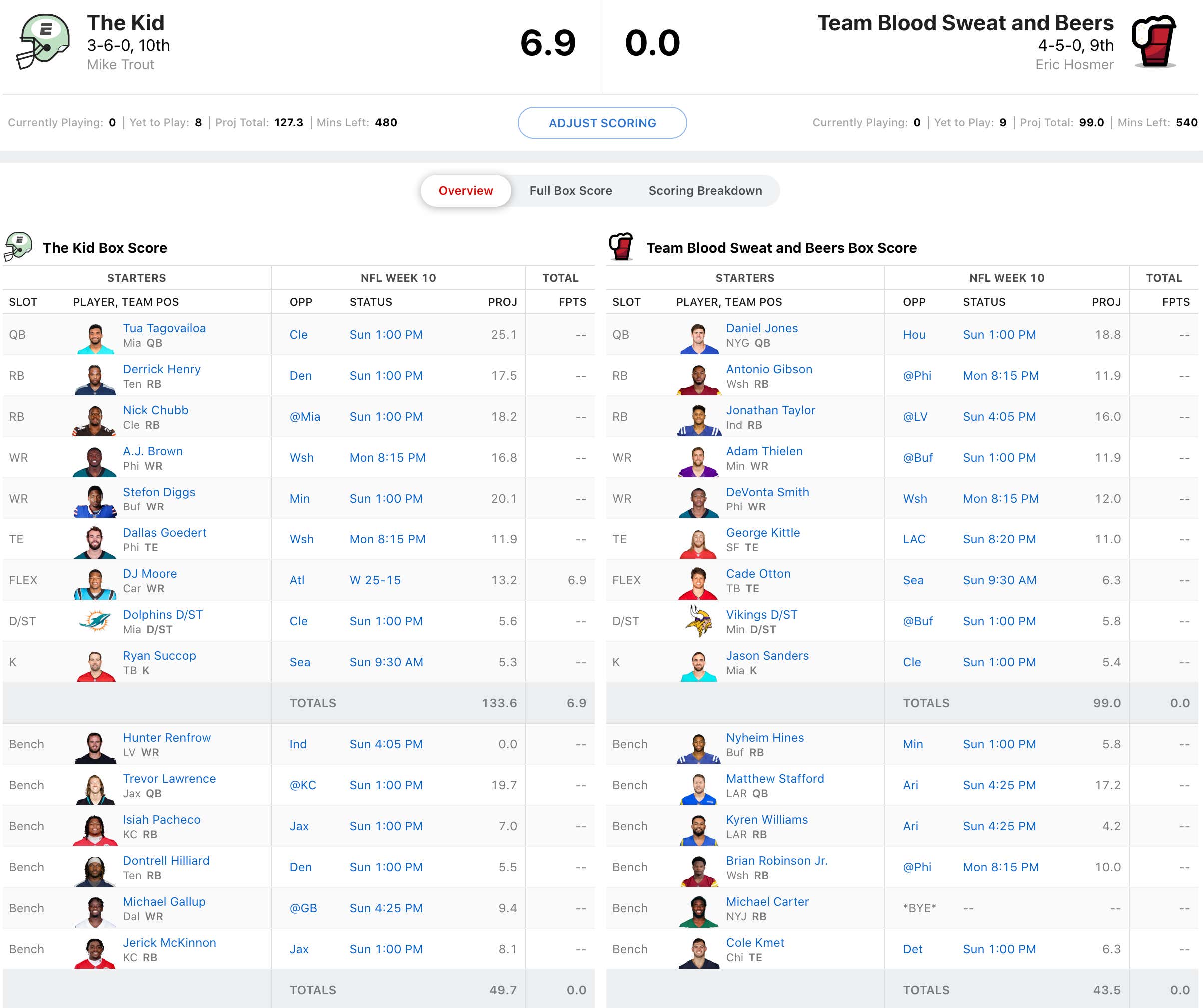 He's benching Matthew Stafford after the concussion, but also benching Rams rookie RB Kyren Williams who was activated this week. He figures to have a big role and you can't take him out for Jonathan Taylor, but starting Antonio Gibson seems like the safe play, but will it work out? Trout has got a star studded lineup but has faced some bad breaks this season. With Tua back healthy, he's got direction and that direction right now is firmly up. He's a whopping 28.3 point favorite this week and I think that'll hold true once the week closes.