Let's fucking go? I think I'm genuinely fired up. He certainly sounds like a capable head coach. I'd go as far to say he sounds better than most head coaches in the league. That was a hell of a speech by Indianapolis Colts Head Coach, Jeff Saturday.

I want this to work out so bad. Obviously, as a Colts fan, I want to see them succeed, and I want to have an awesome football team to cheer for. I would love to see the Colts win at least one more Super Bowl in my lifetime. I'm only 30 years old, that's really not asking too much.

However, even more than I want the Colts to win, I want to see someone walk in with literally ZERO professional coaching experience, and dominate the NFL. I've had this thought for a long time, and I know it's almost definitely wrong, but there's always been a small part of me that thinks it could be true. NFL coaches pour their entire lives into football. They go through painstaking amounts of trials and tribulations to put their team in the very best position to win. There are coaches and GM's who work 18 hour days for 365 days a year, because they are so obsessed with being the best. Families are ruined over it. Lives are ruined over it. But maybe, just maybe, all that work isn't necessary.

Maybe watching hours upon hours of film, and doing copious amounts of research to gain the slightest advantage on your opponent, isn't actually worth it. Maybe drilling a million different concepts into your player's heads, and telling them, "You better not fuck this up or else we're cutting you tomorrow", actually deters from their performance.

Maybe if you relieve the players of all the pressure to be perfect, by not giving them 1000 things to think about on any given play would actually be the best thing for your team. Maybe it's not that deep.

Maybe an ex-player can roll in off the set of NFL Live with a small, basic playbook full 15-20 plays that you could find on Madden, and the players on the field would be good enough to make them work. Maybe by not giving the players so much to think about, they'll play looser on the field. Maybe motivation from a well-spoken, powerful sounding gentleman is all the Colts need to put them over the hump.

Jeff Saturday clearly knows more than that. I'm not trying to belittle him. He's lived and breathed football his entire life. He's one of the greatest centers in the history of the league. I know he's not an idiot. But I do think he embodies this thought I've always had that maybe running a football team like military sergeant/scientist isn't the best way to win football games.

Again, I know this is almost definitely incorrect. Bill Belichick probably single-handedly disproves this entire theory. But boy would I love to see it happen. To see the looks on all the faces of the people in and around the NFL who were so disgusted that Jim Irsay hired ESPN Analyst, Jeff Saturday because he wasn't experienced enough, and hadn't earned his shot at coaching an NFL team. That would turn the NFL on its head. Then maybe teams will start getting really crazy with it. Maybe the Raiders fire Jeff McDaniels and bring in Randy Moss. Maybe the Saints hire Ed Oregon. I want to see shit get weird. I'm begging you Jeff Saturday... 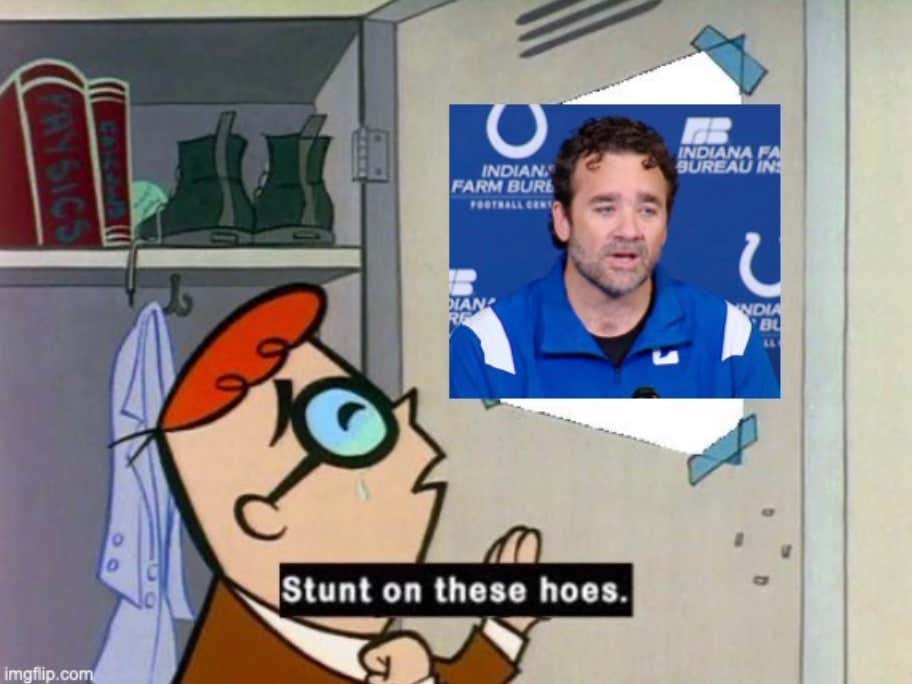