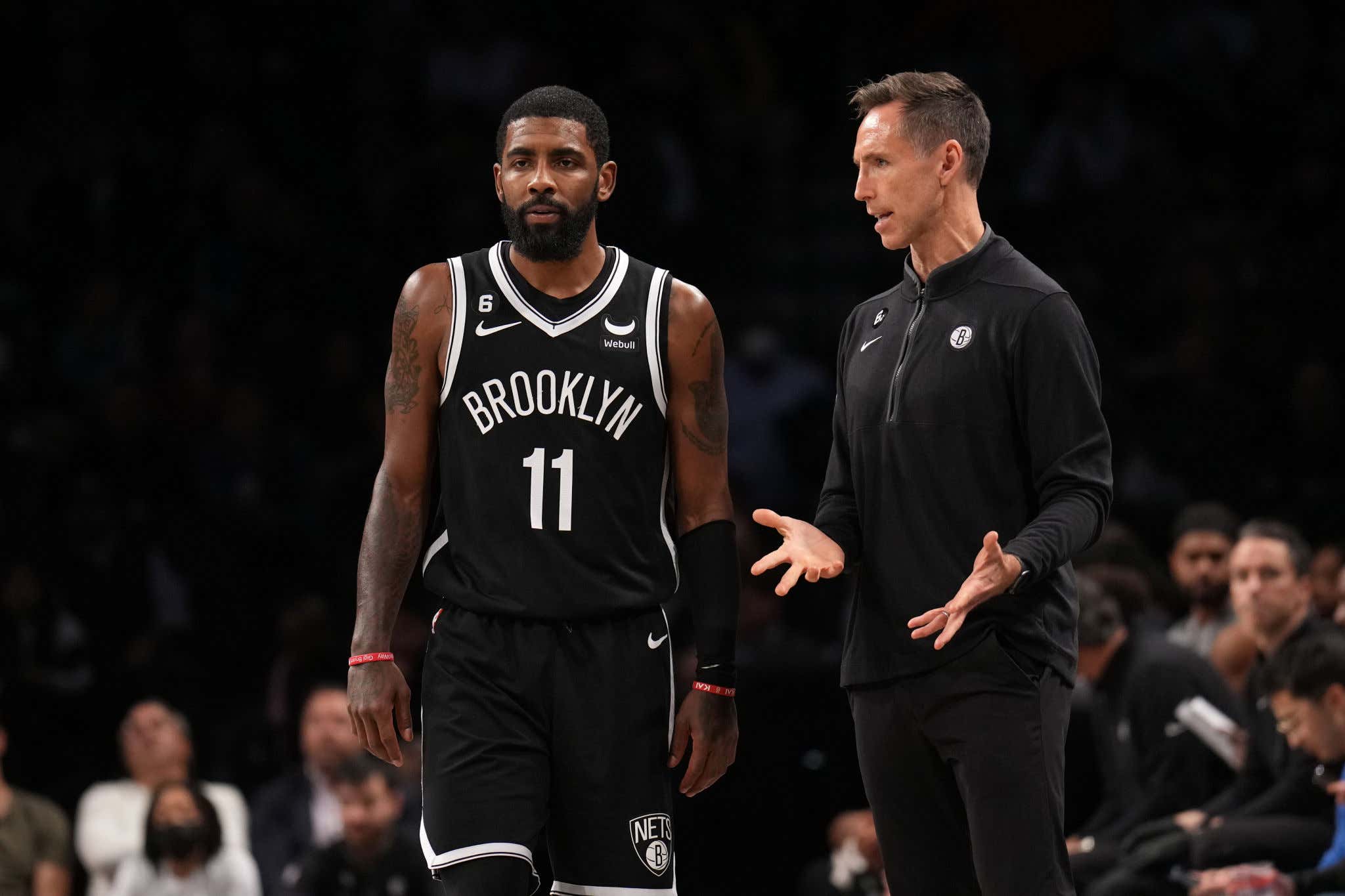 NY Post- "As a veteran with years in both the Eastern and Western Conferences, the advance scout had seen just about everything on the basketball court. But he’d never seen this.

"In the Nets’ Oct. 29 loss to the Pacers — one of the last games before Kyrie Irving was suspended — the All-Star guard didn’t just wave off the play called by then-coach Steve Nash. On 10 separate occasions, Nash called a specific play and the scout watched Irving do something entirely different.

"That wasn’t simple creativity, something to be expected from the uniquely electrifying All-Star. No, it was double-digit defiance.

'I couldn’t believe what I was seeing,' the scout told The Post. 'Nash would call something, and he’d run the opposite. I’ve never seen anything like that.'"

Kyrie Irving claims to be accepting of all people and an omnist and so on, but I wonder where all that supposed acceptance — er, lowest-grade tolerance — was for Steve Nash. You know, the Hall of Fame player turned head coach who was trying to get Kyrie's career back on track in Brooklyn.

It's one thing for Kyrie to put his foot in his mouth whilst speaking to the media. We've gotten a healthy dose of that for many years. Apparently it's the media's fault for painting this ugly portrait of him and casting him in an unfair, negative light. So yeah, all that nonsense, whatever. It is what it is at this point, to use a cliche that Kyrie could stand to plug in every now and then as opposed to all the other arrogant, ignorant drivel he spouts off at the podium.

The only saving grace for Kyrie Irving is supposed to be his greatness at basketball. Problem is, for various reasons, he's missed more games than he's played during his time with the Nets. AND he has such a superiority complex that he thinks anything basketball-related that he decides upon is above reproach, even from his coach.

What a nightmare situation Steve Nash was saddled with in Brooklyn. Many detractors have an argument playbook of shit like, "Oh he didn't know what he was doing" … "He was in over his head" … "Bad leadership skills" …IDK insert x, y, z. Bottom line is a lot of people 100% believe Nash couldn't hack it.

How about another excerpt from this NY Post article, wherein the team's GM alludes to rampant insubordination among Nets players in the aftermath of Nash being fired and the team mutually agreeing to part ways:

"'We both felt that this was time. It was certainly trending in that way,' Nets general manager Sean Marks said at the time. 'And to be quite frank, the team was not doing what it was supposed to be doing.'

"Literally and figuratively. It was a double entendre from Marks, as the Nets not only were not winning, but also were not following game plans. Those problems are not unrelated.  A source close to the situation told The Post that Nash was 'technically the coach,' but that no matter what game plan he gave the Nets, 'they did whatever they wanted.'

"Irving was not the only culprit. There were rampant busted coverages, including Ben Simmons letting a screener slip to the basket thinking Royce O’Neale would take him, though he didn’t. There was Kevin Durant fussing at Joe Harris after a made basket because he felt a pass should’ve come his way. Example after example of disarray.

"'They were the most dysfunctional team I’ve seen [in years],' another scout told The Post."

I know not all players who transition to coaching or front office roles thrive. I get it. But like, do y'all haters really think Nash just suddenly forget what it takes to play sound, winning basketball? We're talking about a guy who was one of the premier point guards of all-time, known for his efficiency, insane hoops IQ, and was a cultural tone-setter whose Phoenix Suns offense revolutionized the NBA. And the popular take, "YEAH BUT HE SUCKS HE'S SOFT AND HE'S BEHIND THE TIMES."

Remember how Kevin Durant's toe was on the line in Game 7 of that conference semifinals game against the Bucks? Had Brooklyn advanced, the perception of Nash's alleged coaching ineptitude likely would've been fundamentally different. Decent chance the Nets go on to win the NBA Finals.

That's not what happened, of course. And apparently there was nothing Nash could do to fix the toxic Nets. He could've come up with the most genius game plans ever. We'd never know it, because Kyrie's incessant questioning of authority, reality and really his flat-out stupidity established a precedent of ignoring Nash's marching orders and freelancing on the court.

I know the Nets just hired Jacque Vaughn — ANOTHER FORMER PLAYER, HEAD ON A SWIVEL, JACQUE! — to be the new full-time coach today. Fuck that. Whenever he's back from suspension, get Kyrie Irving to be player-coach, and when he wants to sit out every third game because he's all in his feelings or whatever, have him roam the sideline as Uncle Drew. At least that'd be entertaining and add some comedy to the circus that is the Brooklyn Nets. I prefer that to the current depressing, uncomfortable and nausea-inducing spectacle those of us in sports media simply have to endure so as to see what latest dumbass development has transpired.