(Disclaimer- The opinions in this blog are mine and mine only, and reflect none of the Chiclets or other Barstool hockey guys)

ESPN - Less than three days after signing Mitchell Miller to an entry-level contract, the Boston Bruins announced Sunday they were cutting ties with the controversial prospect.

The decision to sign the 20-year-old defenseman drew intense criticism from the moment the Bruins announced it Friday. Miller was previously a fourth-round draft pick by the Arizona Coyotes in 2020. Shortly after he was drafted, a report by the Arizona Republic detailed how Miller and another middle school classmate were convicted in juvenile court in 2016 of racially abusing and bullying Isaiah Meyer-Crothers, who is Black. In the report, Meyer-Crothers' mother said Miller started abusing her son in second grade while also using repeated racial epithets.

Bruins president Cam Neely said in a statement Sunday night that the decision to sign Miller "was made after careful consideration of the facts as we were aware of them." Neely said the team believed Miller's abuse of Meyer-Crothers was "an isolated incident" and that Miller "had taken meaningful action to reform and was committed to ongoing personal development."

Neely said that "based on new information," the franchise decided to rescind the contract given to Miller.

For those who haven't followed along the past couple of weeks, the 2022 Boston Bruins appear to be a fucking wagon. They're 11-2, after starting out white hot at 10-1, while missing some of their key players due to injury.

Everything seemed to be coming together. After appearing to have tuned out Cassidy, the team seemed to be buying into coach Jim Montgomery's plan. The "goalie whisperer", Bob Essensa, has goaltender Linus Ullmark looking incredible, and the locker room has never seemed tighter.

So what on Earth possessed Cam Neely and Don Sweeney to not simply "rock the boat", but fucking capsize it, by signing colossal piece of shit Mitchell Miller to a minor league contract, and turn all of that upside down is beyond me.

There is fixing something that's not broken, and then there's this.

The name Mitchell Miller might not ring a bell for some of you, and you should be glad it doesn't. Because he's as despicable a human being as you'll ever come across, and his name doesn't even deserve to appear on the pages of Barstool Sports.

Miller, who's now 20 years old, had admitted in an Ohio juvenile court in 2016 to bullying Isaiah Meyer-Crothers, a Black classmate with developmental disabilities. According to a gut-wrenching 2020 article by the Arizona Republic, Meyer-Crothers was tricked into licking a push pop that Miller and another boy had wiped in a bathroom urinal multiple times.

But Meyer-Crothers said the bullying went beyond that incident.

"Mitchell used to ask me to sit with him on the bus and then he and his friends would punch me in the head," he said in a statement released through the Hockey Diversity Alliance. "This happened all the time in school." 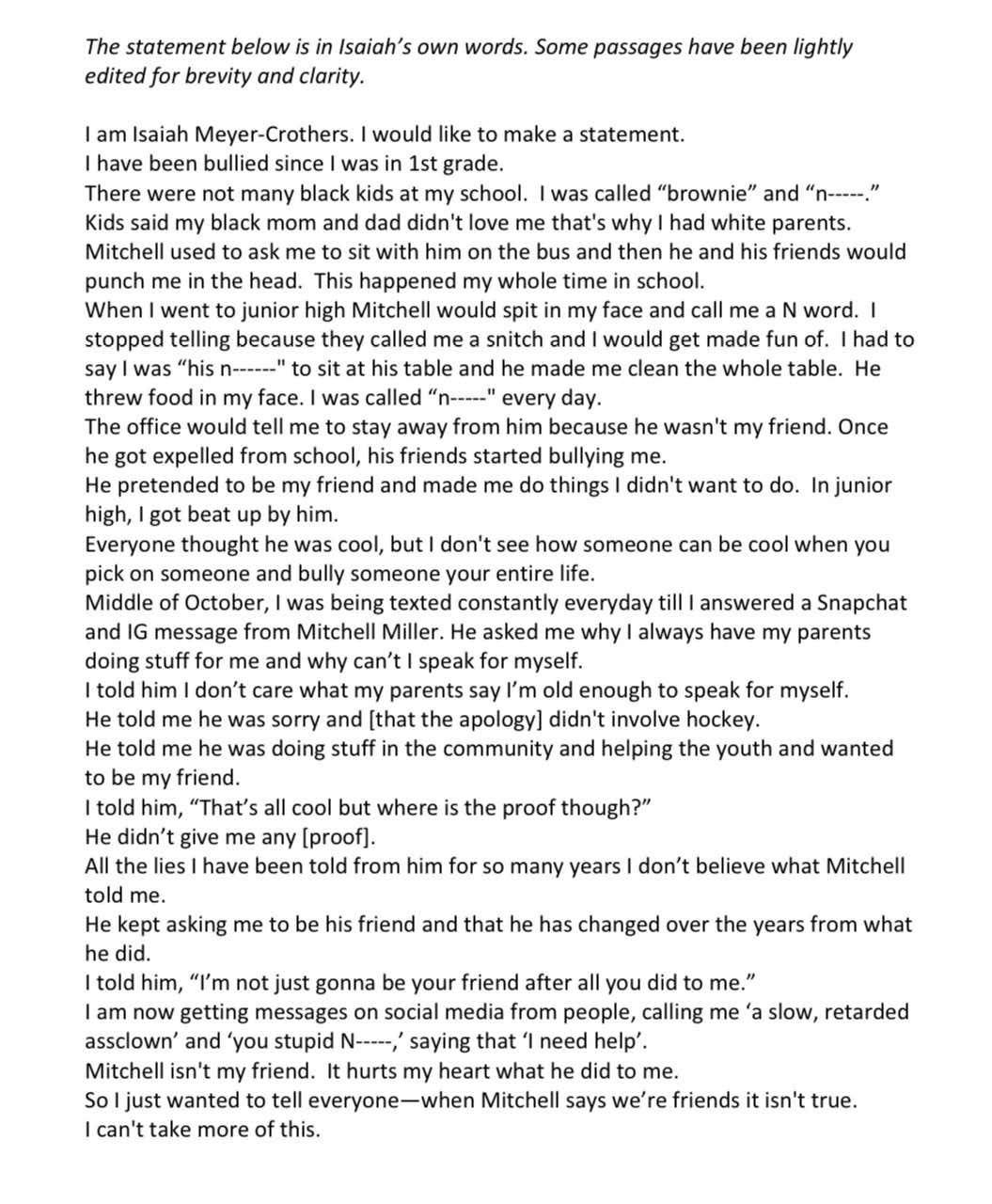 Those are the words of a man whose life has been eternally scarred by a very sick, and evil person.

There are schoolyard bullies who get off on burying their insecurities and own issues by putting others down and abusing them. Then there are people like Mitchell who spend years systematically dismantling somebody with a disability's total sense of worth, confidence, and trust. The guy is sadistic.

Like most people, I am all about second chances. People grow, mature, and learn from mistakes. But second chances should be reserved for those who are genuinely remorseful, and deserve them. That's not Mitchell Miller.

After years of abuse, and being called out nationally for his wrongdoings- something that cost the talented hockey player a career in the NHL, Miller FINALLY reached out a couple of weeks ago to Isaiah Meyer-Crothers to apologize. On Instagram. Via direct message.

Not in person. Not a handwritten letter. Not even a phone call. Not even an email. A fucking DM on Instagram.

The Bruins general manager, Don Sweeney, (a guy I have the utmost respect for and love) said Miller had apologized, but didn't mention it was a half-assed social media message.

"Middle of October, I was being texted constantly every day till I answered a Snapchat and IG message from Mitchell Miller. He asked me why I always have my parents doing stuff for me and why can’t I speak for myself," Meyer-Crothers said in the statement.

Miller's agent, an African-American himself, (cringe), Eustace King, told the "Cam & Strick Podcast" on Monday that his client and his victim had been in contact and had been making plans to meet in person. He also said Miller had been involved in community programs. Awesome.

But that's a day late and a dollar short bud.

When news of this signing occurred on Saturday, Commissioner Bettman lost his mind. Rightfully so.

Bettman said what he had heard anecdotally and understood through media reports about what Miller did was "reprehensible, unacceptable." He said the Bruins did not consult the league but he has since spoken with team president Cam Neely.

"He's not coming into the NHL, he's not eligible at this point to come into the NHL," Bettman said. "I can't tell you that he'll ever be eligible to come into the NHL. If in fact at some point they think they want him to play in the NHL -- and I'm not sure they're anywhere close to that point -- we're going to have to clear him and his eligibility, and it'll be based on all the information that we get firsthand at the time."

Bettman said the Bruins were free to sign Miller to play somewhere else, a reference to the fact that Miller was sent to play for the Bruins' AHL affiliate, the Providence Bruins. But then he added that, "nobody should think at this point he is or may ever be NHL eligible and the Bruins understand that now."

Bruins forward Nick Foligno said Saturday that it was "a tough thing" for the team to learn the organization had signed Miller.

Bruins captain, and one of the classiest guys you'll find in pro sports, Patrice Bergeron, said the culture the team has built "goes against the type of behavior Miller displayed." He said what Miller did was "unacceptable, and we don't stand by that."

Further proof that a man I absolutely adored growing up, Bruins legend, and now team President Cam Neely, has rocks in his head.

Even if this kid was the second coming of Bobby Orr, on what planet can you logically convince yourself, and your colleagues, that signing somebody as radioactive as Mitchell Miller would improve your team in any way, shape, or form?

The guys in that locker room and Isaiah deserve better.